So this is where we start. Idlewild is a 30ft (approximately) from tongue to bumper 2007 Keystone Springdale fifth wheel with one slide out. I bought her at the beginning of 2014 in order to live on the ranch I co-owned during the summer. I didn’t actually look at many campers (it was February) but I took along someone who was knowledgeable about RV living (my ranch partner at the time). Idlewild was one of the first ones I looked at. 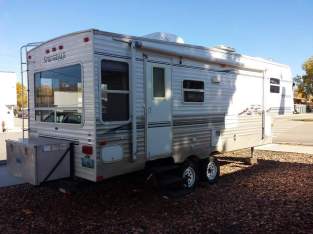 I had some advice from friends…”look for brown water marks, even in the cupboards”, “check the plumbing to see if it was winterized properly”, “make them show you that everything works.” So I went armed with all the questions and an idea in my head of what I should be looking at for water damage and burst pipes. The one thing that I never considered was layout and how many people discard one RV over another because of minor issues that I never would have thought about. I just didn’t do my research!

Thankfully I discovered that I had been very lucky with my choice of RV and that I couldn’t have picked a better layout for myself; the dogs really couldn’t have cared less. The bathroom actually had a small tub and there was enough room to dry off and get dressed. The toilet was in a great location by the door and didn’t feel cramped. There was even enough room for a small litter box or trash can in a cubby space next to the sink (things I never considered). The couch was along the rear end of the trailer and facing the TV and entertainment center, which was on the other side of the dinette set once the slide was out (another thing I hadn’t thought about). There was room for a trash can in the kitchen and the dog food fit nicely beside the stereo. I was super lucky in all these things because it just as easily could have gone the other way.

Of course the first thing I wanted to do was to hid or get rid of the horrible standard decor…and anyone who’s spent any time in an RV can attest to the generic hotel-feel of most RVs. There are two things in life that I find passion in as far as decor and style goes; western or medieval (I know, they don’t exactly mesh well together).

So, since my house is decorated in a western theme (it’s a log house) I decided I was going as medieval and as viking as I could in my camper. It’s a work in progress and I’ll share the before and after photos when she’s done.