What an amazing night for sleeping. It started off a little warm so I left the dogs, on their beds, in the back of the truck with their water bowl and watched part of The Hobbit before going to sleep. I had the window open and it was probably around midnight that I was glad to be able to crawl under my comforter, and sleep comfortably and well for the first time since I started this trip.

I woke at 8ish, and was glad for the tree cover from the early sun as it kept both the light and heat at bay until I was ready to emerge from bed. It was a gloriously cool morning and I took my time getting dressed and doing the morning chores. I seriously debated spending the day and another night in this place but the appearance of military jets overhead, initially scaring the hell out of me yesterday afternoon, dissuaded me from spending another day.

Another issue was that I didn’t know if I could find enough to keep me occupied all day, however I wasn’t sure I’d find such a pleasant campsite for another night. Along with a great start for the morning I was pleasantly surprised by the appearance of a doe and two tiny fawns next to the road. One of the babies stood for a while, watching me and just long enough for me to get my camera out but disappeared just before I was able to snap a picture. The only picture worth taking was a very distant shot of Mt. Rainier as I was coming in to Yakima. 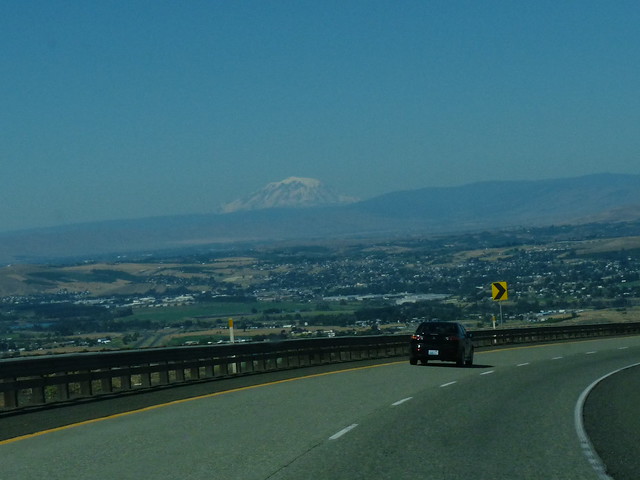 I decided to travel a little further east, completely opposite from my intended destination, a go through Yakima, WA…just for something to do. The distance wasn’t that great and the drive was short today…a huge reprieve from yesterday. I took Highway 12 out of Yakima and then on to 410 towards the north side of Mt Rainier National Park. One road on the map looked pretty promising, as does camping in general in this part of Washington,and I explored a small road that lead to Goose Prairie, a small town on the way to Bumping Lake…what a great name. This whole area has had some rather unique and odd names which has brought me some amusement.

Several campsites initially begged my attention but my rule is generally to not accept the first one you see, even if you eventually come back to it. If I had done that yesterday or today I would have missed out on something great. 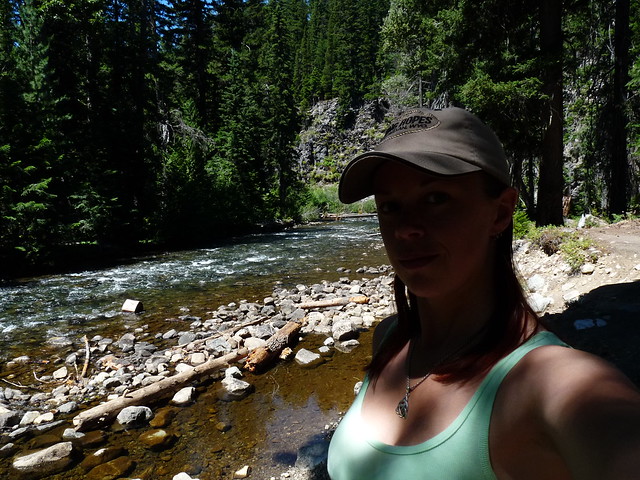 Today I happened upon what I assume can only be a dispersed group campsite. It is not an official campground, but it did have many multiple sites for people to use…however there was no one in the area, and it was far enough off the road and next to the creek that I made the affirmative decision to stay there.

I initially parked and planned to camp at one end, but after some exploration (after I had already parked and set up basic camp) I found that the previous tenants of the neighboring campsite had left a lot of trash and food, both in the fire pit and on the ground. I walked the camp area on foot and found a difficult-to-reach remote campsite alongside the creek that was pretty perfect. Without four-wheel drive and a high-clearance vehicle there would have been no way to get into this place.

With camp re-established I put on my shorts and flip-flops and went to sit on a strategically placed log in the wide creek for a couple of hours. The dogs had a blast and then proceeded to pass out, exhausted. 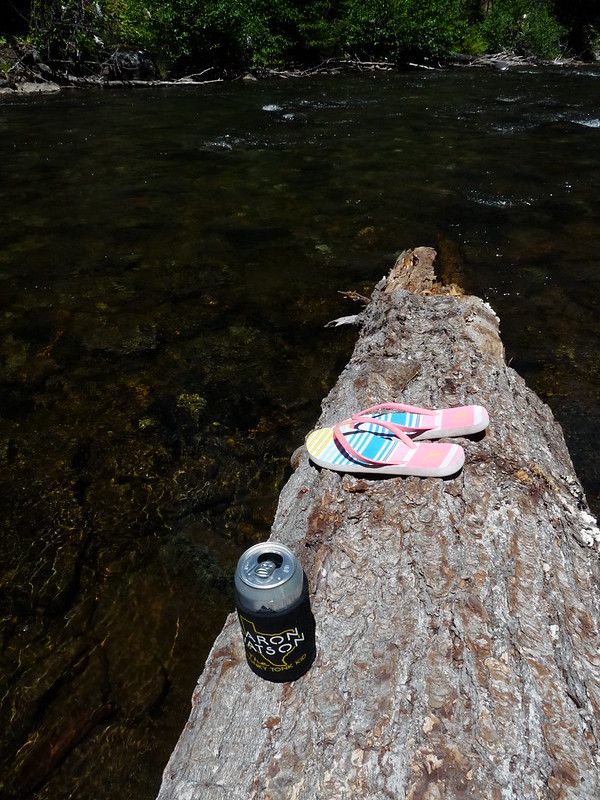 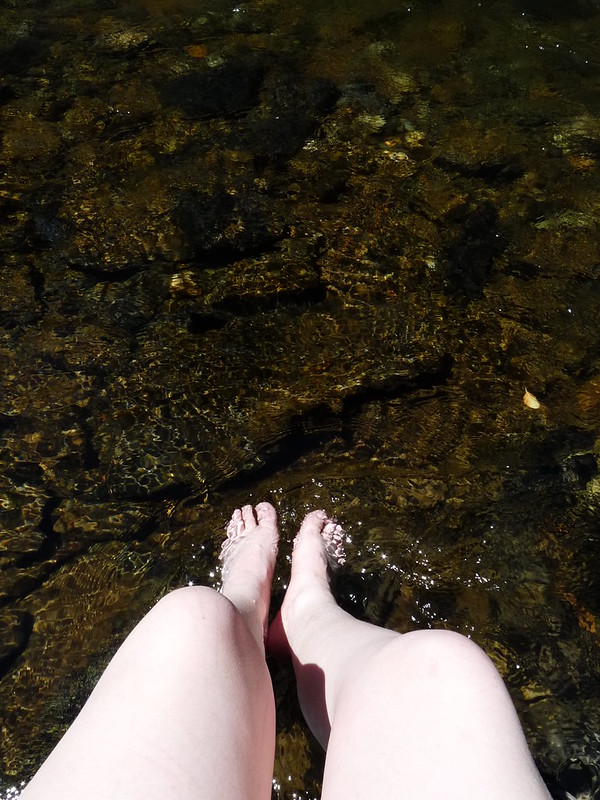 Sadly I left my camera sitting on my camp blanket on the log and the wind gusted once and threw both blanket and camera into the river. The blanket was salvageable, the camera, sadly, I think was beyond help as it had sat in the water for at least seven minutes. Hopefully I still have all the pictures on the SD card and didn’t lose them (which I obviously did as you are getting to look at them)! The camera is pushing eight years old and getting a little beat up so I guess it gives me an excuse to upgrade. Hopefully I can find a new camera locally and in short-order for the wedding, and to record the rest of my travels. 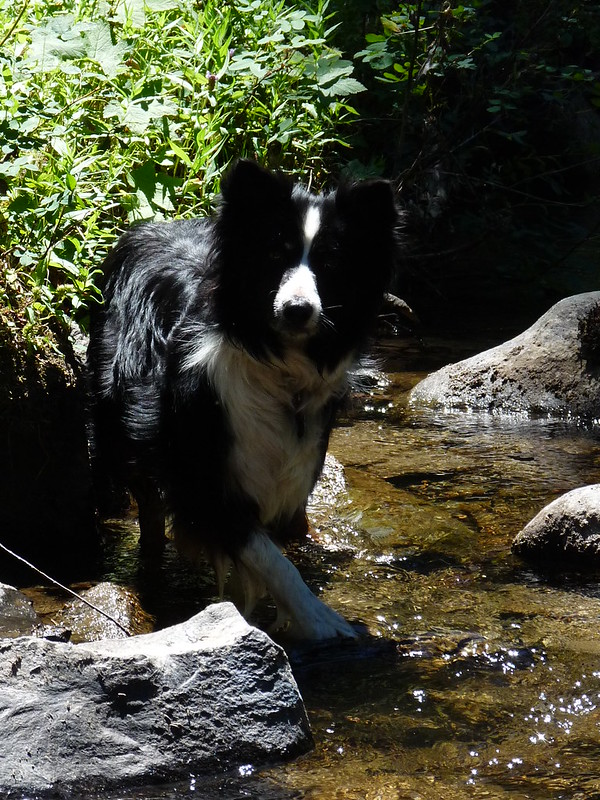 I spent a little of the evening trying to catch crawfish (large, lobster-type ones) and tiny fish…which are not as easy as frogs to catch (which weren’t easy in themselves) but it was fun. 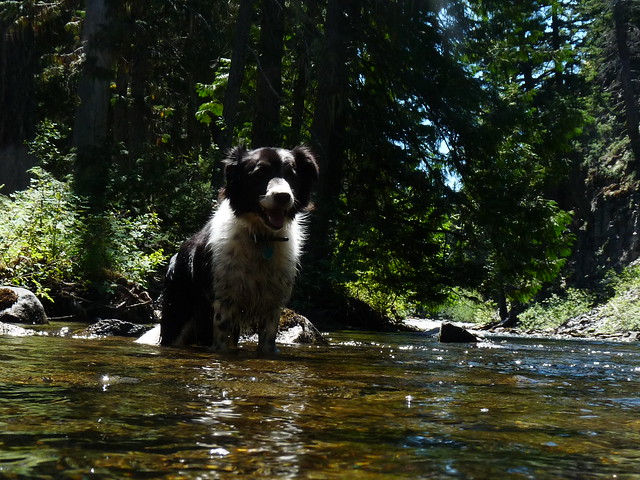 At one point in the late afternoon I had the fortune of seeing one of the fighter jets fly directly over head. He couldn’t have been more than 1000 feet above the valley floor. It was quite a thrill and reminded me of my dream of being a fighter pilot when I was younger. To fly in one is still the number one thing on my bucket list…sadly one that I will probably never get the chance to do.

After the sun went down I swear it heated up as I started sweating up a storm but I was determined to finish The Hobbit despite the heat in the cab of the truck.