Unfortunately I woke up in the wee small hours of the morning with paranoid thoughts of bad men and me in a remote location. I always lock my doors and leave the keys in the ignition, just in case something happens, but at 3am these things don’t always help the illogical and darkness-tampered mind. I managed to get back to sleep and didn’t wake until a decent hour. I took time packing camp this morning as I didn’t have far to go and I wasn’t sure when to arrive at my friends’ house. The drive along 410 just got prettier the higher I went until the highway curved over the pass and you could look straight down the valley. Just over the crest of the pass Mt. Rainier came into view; a beautiful, snow-covered peak that it as impressive as it is unique.

A little blurry, but a beautiful panoramic shot of Mt. Rainier from the east side as I came over the pass on 410.

I circumnavigated the national park to the north and came into Buckley to fill up with gas. From this point on, and until I stopped at Walmart for a couple of necessities (a new camera and some oil), I didn’t have any power to speak of. This concerned my greatly for I was a long way from home; the saving grace that if something needed fixed I wouldn’t be needing my truck while staying with my friends for the wedding. 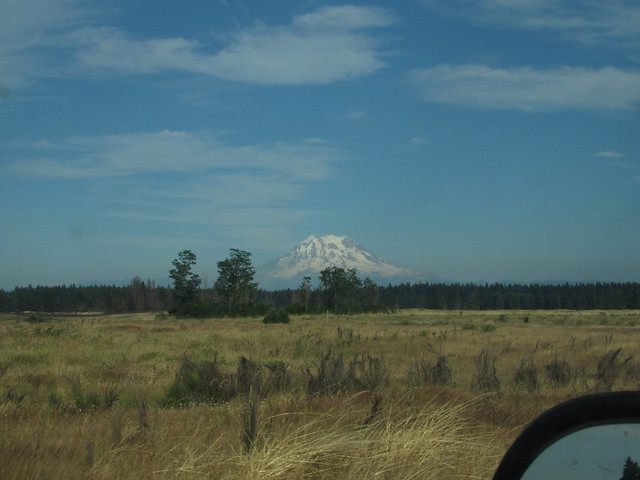 Kye amused me while she was dozing in the front seat and enjoying th air conditioning of the cab:

With a call home I was told that my truck problem was probably just a need for a fuel filter replacement. An easy fix we managed to do in 5 minutes as well as topping up the AC refrigerant. I arrived at my friends’ house (Steven and Breann) an hour before they did which gave me some time to play around a little with my new camera, a Canon Powershot super zoom. It is a lot more technologically advanced than my dead Panasonic Lumix, and the 50X zoom is incredible. My only concern was the inability to shoot in monochrome (black and white or sepia) which is a very important feature for me. Eventually I figured it out and all was good with the world.

Steve and Breann showed up after a while and it was really great to see my old work friend, Steve, again. We had worked together for a summer at Aspen Canyon Ranch in Colorado in 2008 and it was one of the best summers we had both ever had. It was a group of people who have continued to stay in touch and remain friends throughout the years…a feat rather unusual in the guest ranching business. Steve was one of only a couple of members of staff I had not seen since that summer and I was excited to see him again. I had not yet met Breann, his wife of two years, but we had conversed a great deal on Facebook and it was awesome to finally meet her in person as well.

After getting cleaned up and taking the first real shower I have had in a week we drove out to Lewis Lake which is on a public access part of the local military base. As we drove I was beginning to wonder if I should have signed a waiver with all the “live artillery” and “danger” signs lining the road to the lake. Still, it was a fun hour and the dogs all got to know each other. 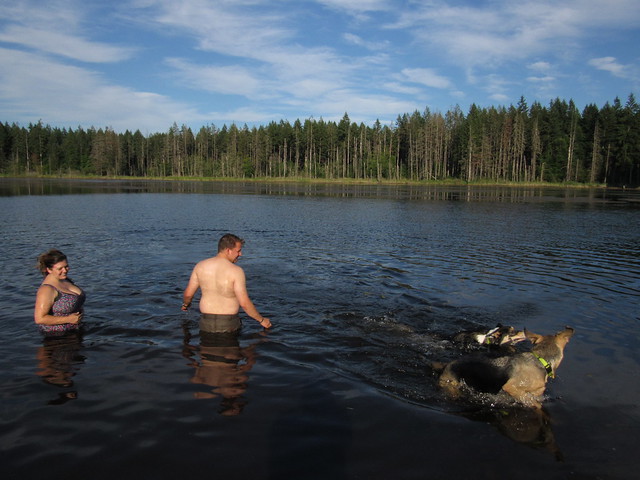 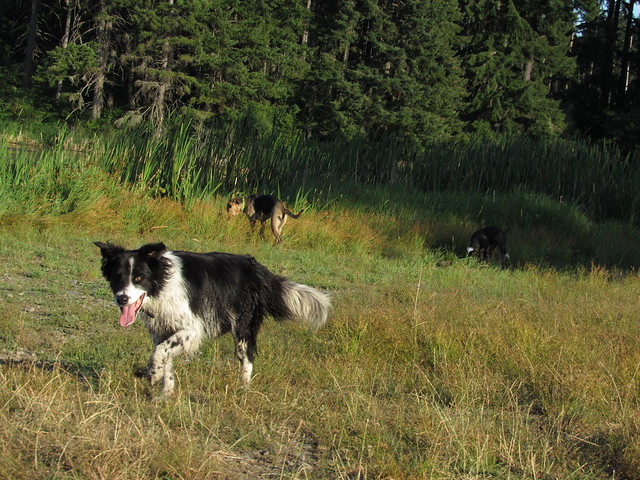 With the dogs well worn-out we let them sleep and went out to dinner for Mexican. It was a pleasant evening, well-spent before we returned to the house for a little bit of Yukon Men on TV (a rare treat for me since I don’t have TV at home). A real shower and a real bed awaited me, and it was something I was really looking forward to after a week on the road (despite the fact that I actually do sleep on a mattress, with sheets and comforter, in the back of my truck).