Oct-31-2015
Day 17
It rained in the night so all the curtains were soaking wet, at least those parts of towels and pillowcases hanging outside of the windows. The inside parts were damp so it must have rained pretty extensively. I’m glad I made the last-minute decision to keep the dogs in the truck or they, and their fleece beds, would have been soaked. At any rate, I was up early this morning. I wanted to get an early start to see Crater Lake National Park before it got busy. Sadly a lot of it was covered in cloud but I still managed to see the better part of it, including Wizard Island. 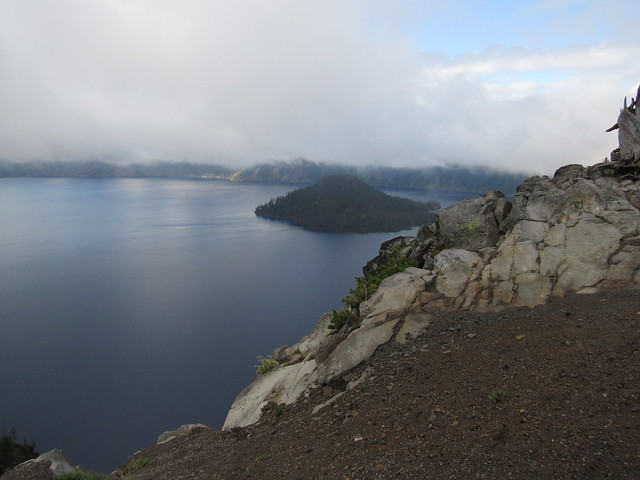 Driving from the north entrance, around the west rim was a little hairy due to limited visibility, no guard rails, steep drop-offs and very narrow roads. At one point it felt like I was driving into oblivion with the road hidden in the mist ahead of me and completely obscuring the few trees on that littered the steep drops on either side. It truly felt like a road to nowhere. 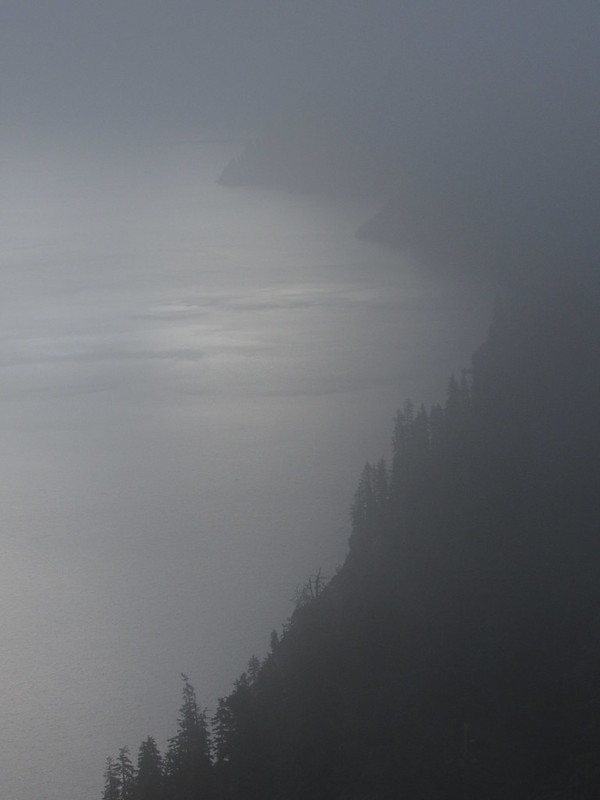 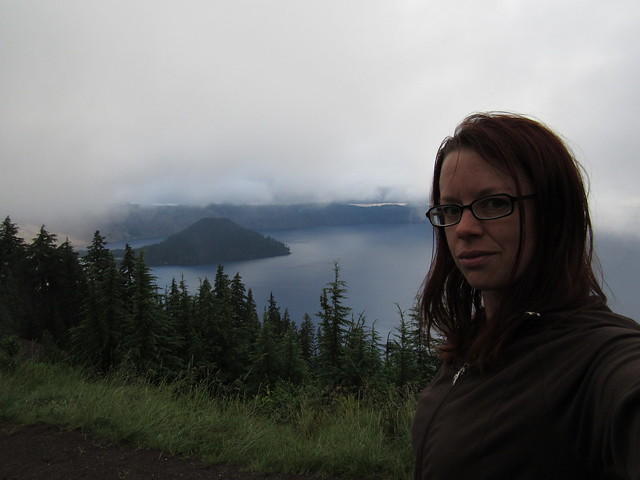 From Crater Lake NP I headed to Bend, Oregon to stock up on supplies, and on what must have been the straightest road in the county, before heading to Madras. 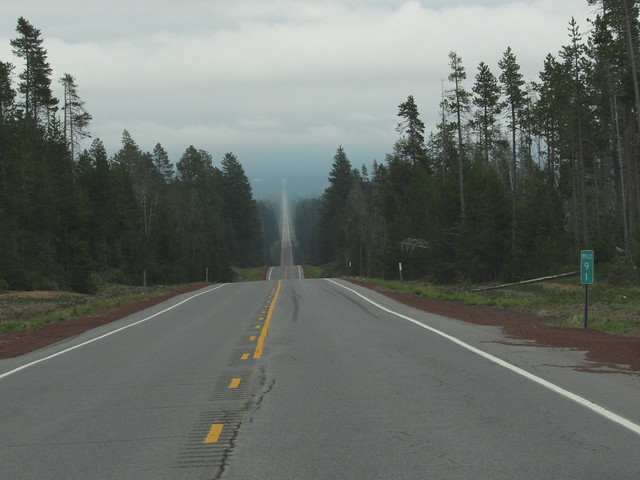 Madras was out of my way but it also holds a very emotional attachment and I wasn’t going to pass up my one opportunity to stop there and make sure I had a souvenir. It was nothing special but a couple of cheaply-made trinkets, but it was the message both trinkets had on them that made them worth what I paid. I won’t go into too many details but it was a pretty emotional stop for me, and I think I cried both on my way into and on my way out of town.

From Madras I truly began my trek back east. It began to rain pretty heavily and I was glad to have removed my pillowcase-curtains a few miles back. I really hoped to find a quiet and dry campsite where I could spend some quality time with the dogs. I love this part of Oregon for its open spaces and pines, and found a beautiful and secluded spot in the mountains, surrounded by pine trees and open space! 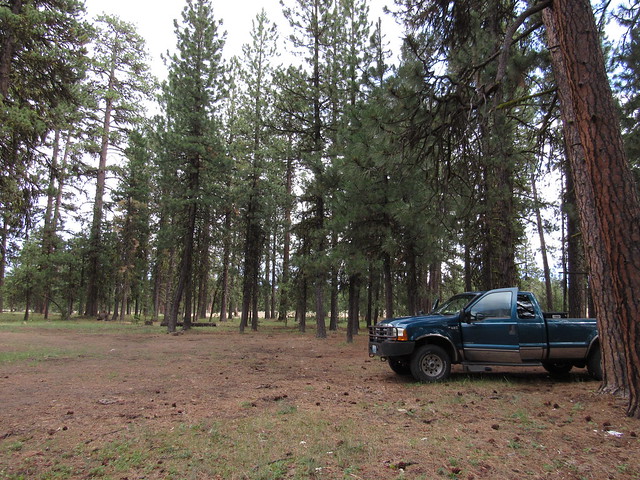 In Bend I had bought some ribbon to attach to the bottom of the curtain for my back window. When I had originally had the curtain made it had hung just perfectly to the top of the back seat. Somehow, over the last year or two it has shrunk slightly, both length ways and width ways and now lets in light at the bottom. So with some 3″ black ribbon and some hemming tape I managed to re-lengthen the curtain to where it needed to be. I also used some Liquid Stitch to seal the frayed ends of the ribbon. It was only then that I realized I had attached it to the wrong side of the curtain if I wanted it to look nice. Oh well, it’s only supposed to be functional not pretty…it is in my truck after all! I also attempted to repair the scratch in my new camera but to no avail…guess I’m just going to have to live with the results of my clumsiness. 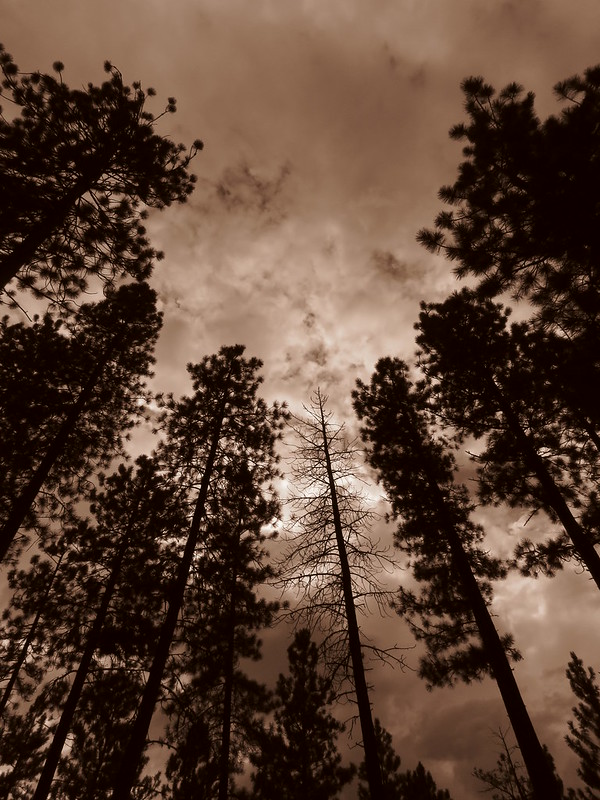 The one thing I do need to buy are some wider towels for the front-door curtains (so redneck I know) as the ones I have just aren’t quite cutting it. It was definitely going to be a cool night and I wasn’t sure what the weather was going to do. I had really wanted to have a fire with the really cool temperatures, but that was unfortunately a lost cause with the fire ban in effect statewide.

I hate to keep the dogs in the truck at night since they spend so much time in it during the day (AC etc) but I also don’t want them and their blankets to get wet either…or have to get up in the middle of the night to put them in the truck if it DOES start to rain. Such a conundrum.