Nov-1-2015
Day 18
Had a pretty awesome night. It was cool and quiet. I had originally kept the dogs in the truck but everyone was hot; they were noisy breathers and the sky looked pretty clear so I took the risk and put them in the bed of the truck. It suited everyone better and I slept really well for the first time since I left Steve and Breann’s place.

Other than a beautiful drive through eastern Oregon and a stop to replace my scratched camera (I upgraded to the second camera I’ve bought on this trip; I couldn’t handle the scratch, and I was glad I did) today was pretty uneventful. It was a lot of driving and my truck is pulling to the right again. I need to add some air but keep forgetting at gas stations because Oregon has full service and, as such, I never get out of the truck…pull in, pay, pull out. Hopefully I remember tomorrow now that I am in Idaho.

It took a little longer than I anticipated to find a campsite tonight, and it’s not perfect. It’s situated atop a knoll in the land between two sides of a looped road. It is pretty but I under-estimated the amount of traffic on the road, especially truck traffic. I’m not really visible too much from the road, but I’m glad it’s not one of those nights I need to use my camp shower! Despite that it has been a very pleasant evening, with temperatures about perfect. I pulled out my camp blanket and just chilled with the dogs for a short while. 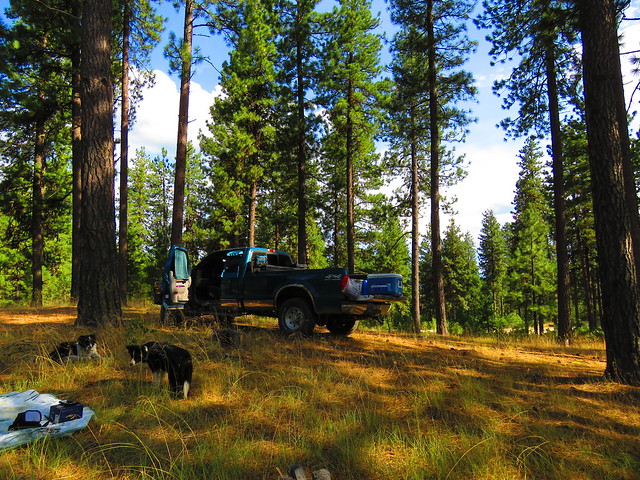 We had one visitor to camp; a woodpecker who was intent on the nearest dead tree for grubs and bugs. I tried to get a picture or two, and got one with full zoom on my camera and one from as far out as possible to show the comparison. I was watching some potential thunderstorms move in towards us so I didn’t have any curtains put up yet but I was ready to load the dogs and close up quickly if the rain should come in.