Nov-3-2015
Day 20
It was definitely cold last night and I certainly didn’t want to get out from under my comforter and blankets this morning (yes, I had two over me). We went into Sun Valley for some breakfast which consisted of some really good homemade blackberry muffins. I managed to eat a whole one and a bite of another before it got to much for me. 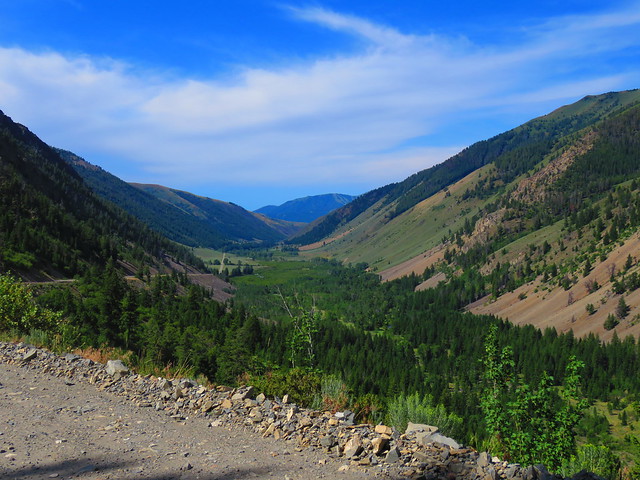 With my belly full I let the dogs run for a while and then headed to Sun Valley Stables for a short morning ride. I was early but it was nice to sit on the bench and watch other people do the wrangling and saddling for a change. I signed the standard waiver and made a note of the bottom: “Would really appreciate being given a horse that the wranglers like to ride.” It’s kind of a sneaky way of asking for the good horse without coming across as the thinking you are the crackers and a block of cheese!

The horse I was given went by the name of Giffer, and was a bay gelding that was fairly new to the string. He was a fun ride and listened well, although he needed someone to work with him on his head tossing. We took some pictures from the top of the ski hill, of us on our horses and the town of Ketchum below. It was definitely pretty.

The wranglers were fun and they definitely appreciated having an experienced rider along with them for a change. We got back to the stables I spent a few minutes more talking to the wranglers before tipping them and heading out (after they offered me a job!)

From the stables I took Trail Creek Pass, back past my campsite from the night before and over the mountains towards Arco, Idaho. It was a stunning but slightly scary, narrow dirt road. The view from the top, looking down the valley was especially awesome and you could see the work the glaciers had done in days past in creating the U-shaped valley.

Up and over the pass and driving into the dry valley below where I was rewarded with a stunning view of a gorgeous bald eagle (I love the look he’s giving me). I paused to take a couple of shots before I realized I was delaying red truck behind me. 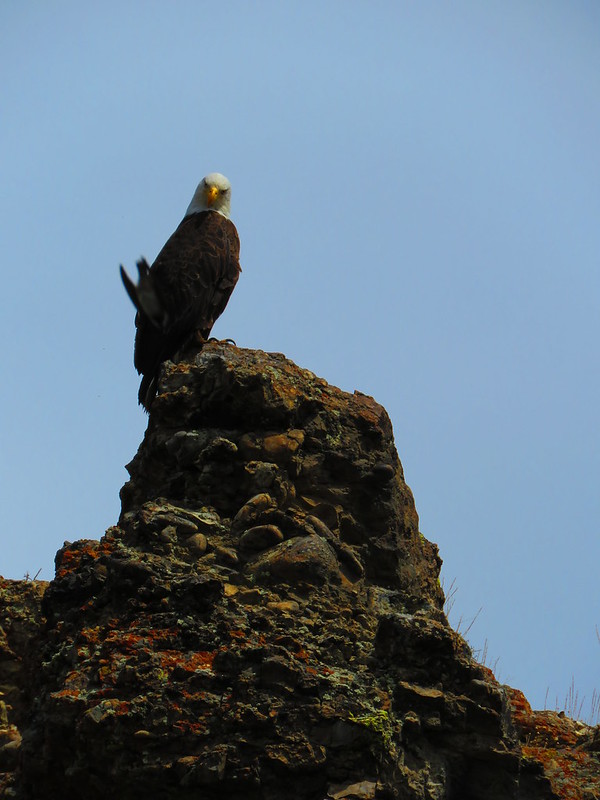 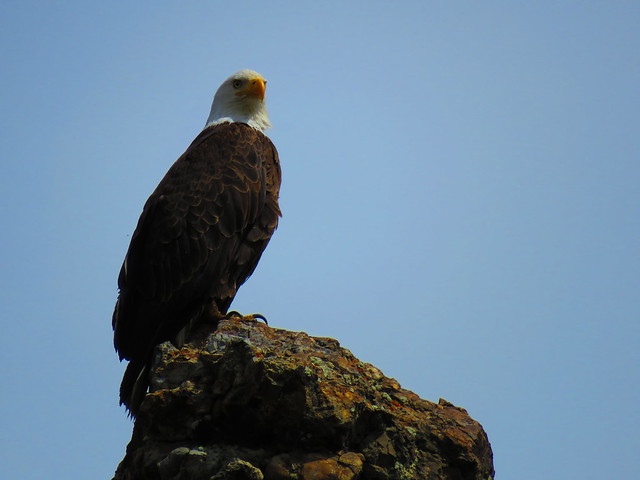 We got stuck at traffic control points and took the opportunity to photograph the Lost River Range, including Idaho’s tallest mountain, Borah Peak. 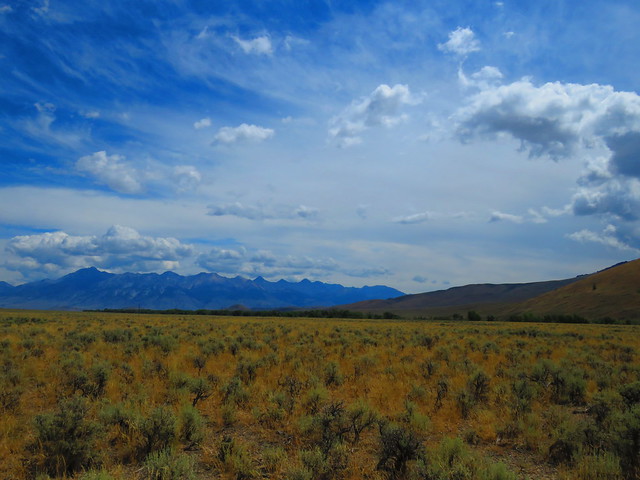 From there we followed the road south on the west side of, and paralleling, the Lost River Range we made our way toward Rexburg and then to the rough dirt road that takes you into Wyoming and through Yellowstone or Teton National Parks. 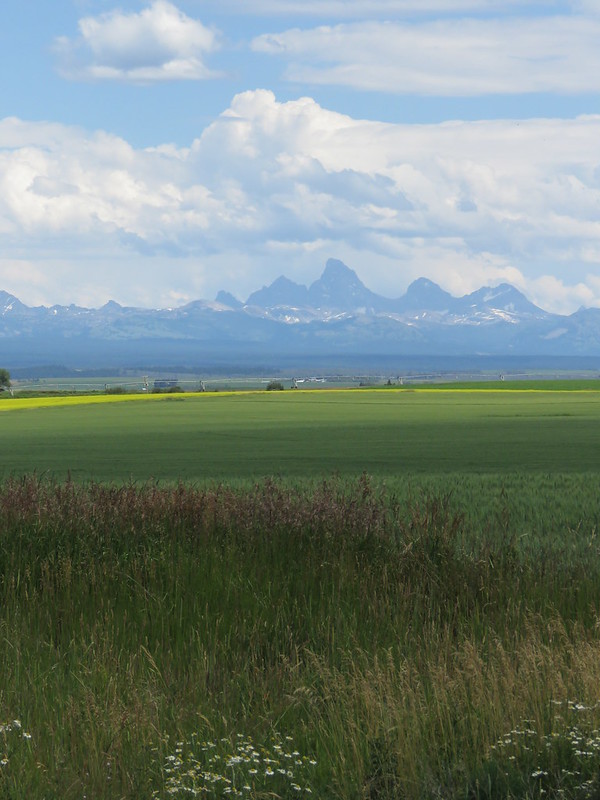 It took a while to find a camping spot and once you get to a certain point, near to the parks, you can only camp in the free designated campsites. I tried the first one but found that I had trouble finding a flat spot for my truck. I tried the next site down the road and found it to be full. I guessed that all other sites closer to the park would be full, turning around and heading back to the initial site. 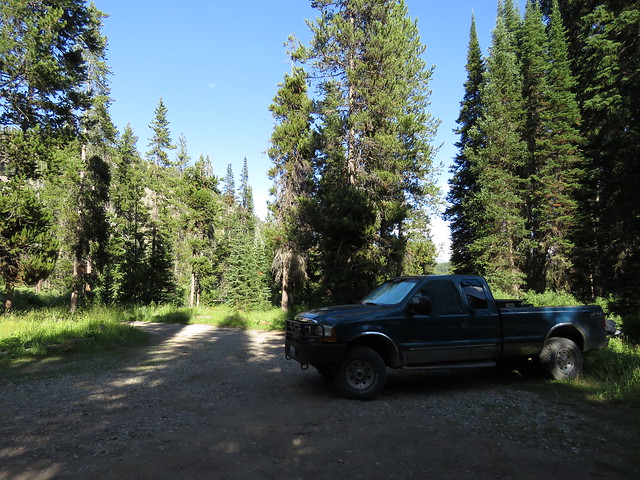 I managed to find a way to park my truck that was mostly level and also enabled me an easy pull-out, which is something I always look to maintain in case of emergency. I had been right in thinking that all other sites were full as the amount of people who stopped to check were numerous. 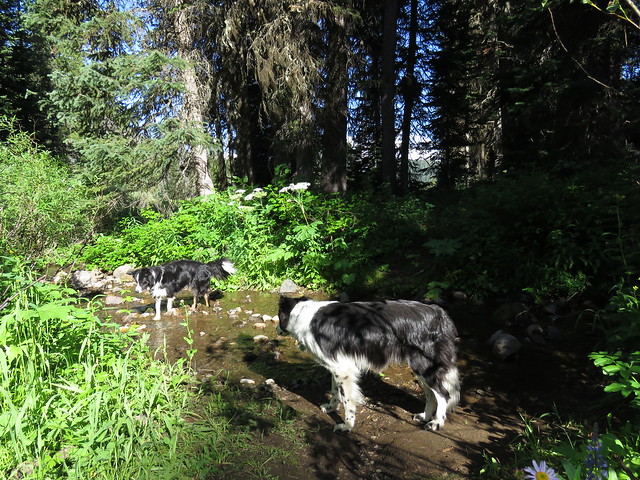 One couple from Alaska (Adam and Lacey) stopped and asked about campsites. I informed them of the lack of sites further on and how rough the road got. Since they didn’t have kids I offered to let them stay in my campsite if they were okay with the dogs being friendly, and if they could get a fire going (which I had given up on).

With a fire going and their tent set up we talked about where we were all from and what our trips were. They shared a meal and a beer with me, which was very kind of them and we chatted for a while.

With it starting to get dark we had a car stop at the entrance of the site and I was once more asked about camping further up. And once again I explained about the lack of camping for several miles. With my Alaskan campsite co-hosts we agreed to offer them space to stay. What started out as a quiet evening with the dogs turned into a pretty fun and full campsite. I have to admit that I think we all went to bed a little drunk tonight.