I stayed with friends near Gillette so I didn’t have to drive 4 hours and then hike today; 2 hours driving was quite enough from Gillette to Alkali Creek Trail Head where I was to leave my truck and meet my ride who would be transporting me to my chosen start point, 47 trail miles away.

Kye, Cody and I started the hike at Rapid Creek Trail Head below Pactola Resevoir dam. It was a gorgeous spot and my ride warned me about the mega climb from the parking lot…and he was completely right. My pack was heavy with 4 days of food and 2 liters of water. Cody was unimpressed with his pack since it was new to him and he tried to bite it once and then turned into a bucking bronc for a few seconds as he tried to get rid of it. He got used to it quickly and became the lead on the trail with Kye following me as the caboose, just as she had done the previous weekend hiking Tongue River Canyon.

It was warm and sunny, quite the opposite of what I had been expecting and we were quickly going through the water. We hiked a short trail down to the reservoir to replenish and take break, and for the dogs to cool off in the water. Not the nicest looking water I’ve ever seen but that’s what filters are for! 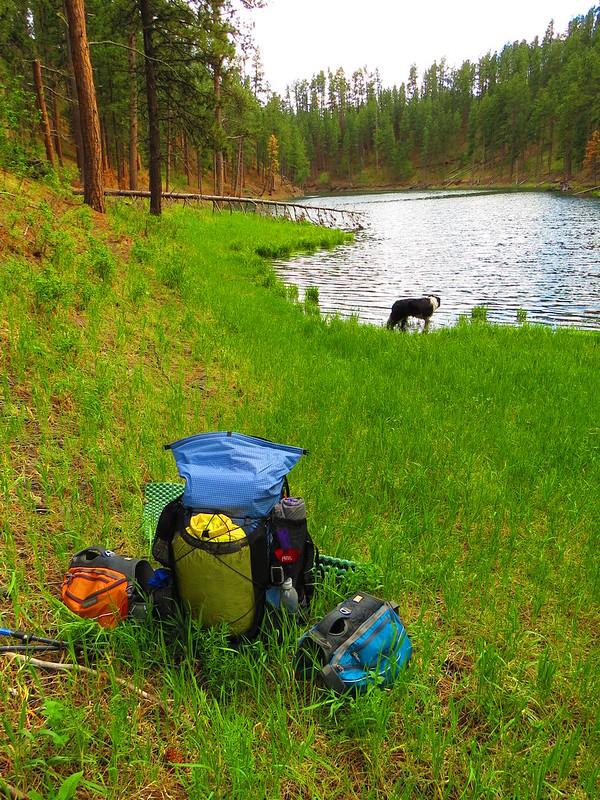 We hiked up gullies and down hillsides, and through a lot of logged areas. I kept hoping to find Deer Creek but it was dry and provided no water which meant we were seriously low on water for the over night. At one point I took a small wrong turn for a few hundred yards before checking my Black Hills paper map and Google maps together. 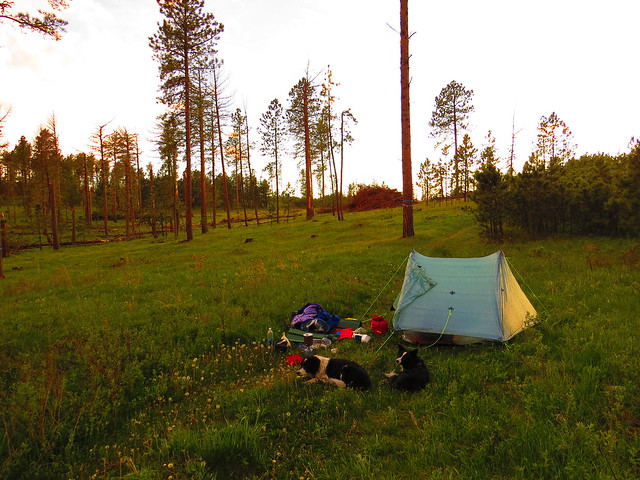 Finally, at about 7:30 we could stop for the night, eat a meal of Ramen and put the tent up. My biggest fight with a tent site was the crazy rocky ground that didn’t want to be nice to stakes…and I didn’t want to bend any since I only have one spare. The other issue was the lack of suitable flat spots…without rocks and logs and tree stumps. I ended up putting the tent up in the middle of an old off-road track. I didn’t care, I was done for the day, and so were the dogs.

Coyotes woke me at least three times during the night. At first they seemed a moderate distance away, then an hour later they seemed really close…the third time they were further afield and they finally settled down. For some reason I couldn’t get warm and slept really rough, despite wearing pajamas, a neck buff and a woolly hat, all inside a 10°F sleeping bag.

I finally crawled out of my sleeping bag at 6:30am and got dressed. I let the dogs out and noticed the walls dripping with condensation…the bane of a single-wall tent. I had thought there might be enough airflow under the walls to compensate for a human and two dogs, but I had to put the tent away wet and hope I could get it dried out before bed.

It took until 8:30am to pack up camp which seems crazy when everything fits in a small backpack, but I was hoping the sun might peek over the trees and dry the tent. 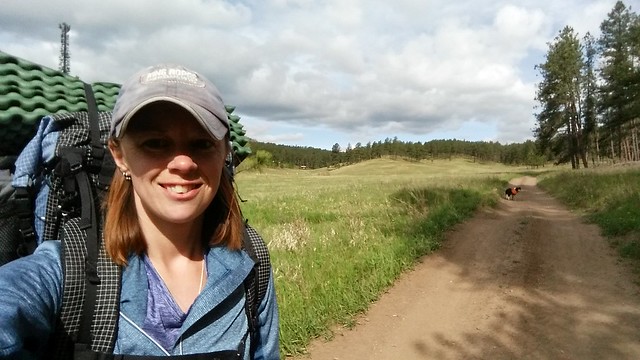 Pilot Knob was the next stop for water, about 3/4 mile from camp. I filtered water and made coffee (Yay! Caffeine) and ate breakfast while the dogs explored, drank and rested. Finally I packed back up and made use of the trail head restroom before climbing up, again, following at ATV road. 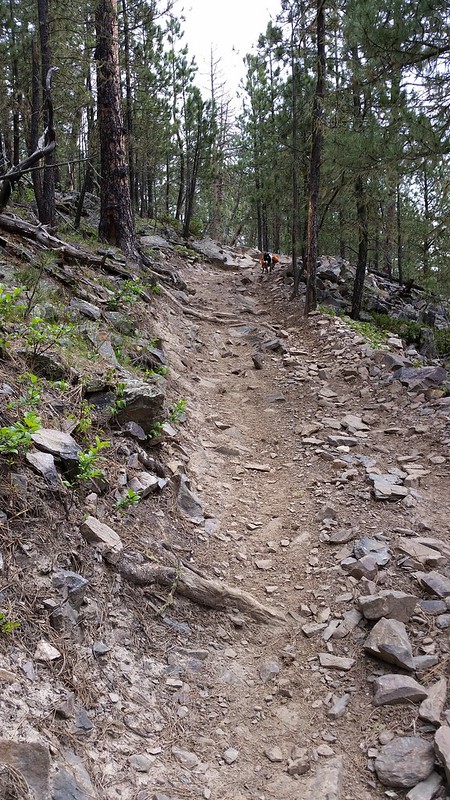 The trail from here to camp was almost nothing but ATV trails and that got old fast, especially with having to constantly step off the trail for the multiple machines. 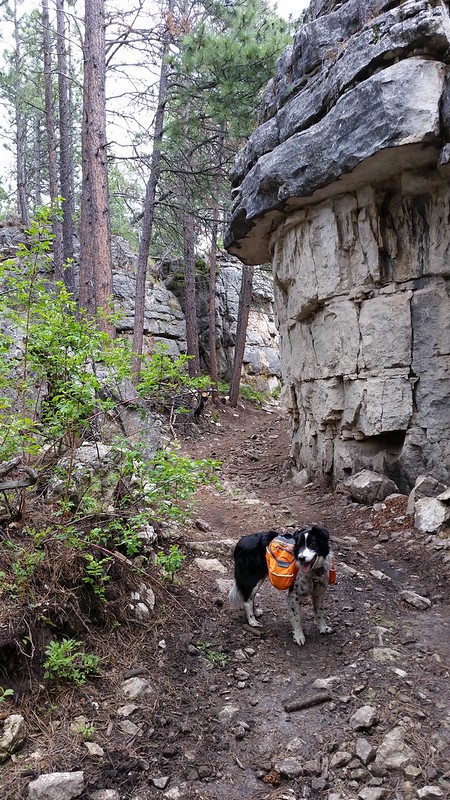 There was more water this morning and I had thought about camping near Box Elder Creek but it was not much past noon by the time I reached it after 8+ miles so I decided to load up on another 2 liters of water and push myself a little and try for Dalton Lake, 7 miles further on.

Of course, as always, the first obstacle after adding more water to your pack weight is a damned giant hill…and there were several of them. Many times as I reached another upward slog I was cussing at myself trying to hike so far, and after 4 miles I was physically done…but needing a camp with water I pushed on, doing some real zombie hiking. I don’t think I have ever hiked 14 miles in one day, let alone with a 30 lb pack. 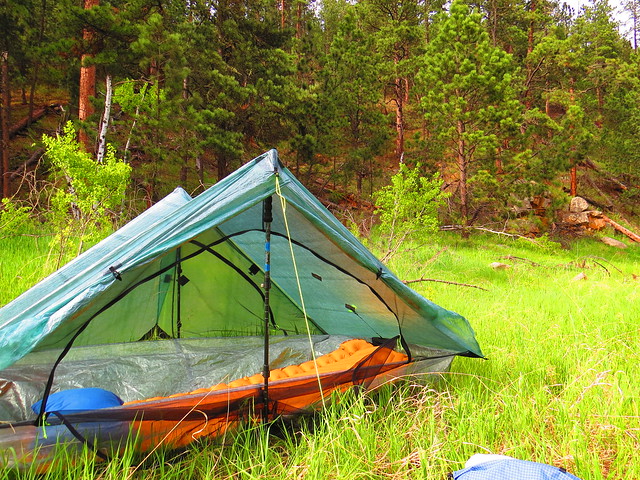 We arrived at Dalton Lake a little after 4 and despite my exhaustion I knew I had to set up my tent to dry out in the sun and breeze. We camped alongside a little creek for the fogs to drink from and I can filter a ridiculous 4 liters in the morning for the 12 mile dry stretch I have to get through.

We all ate dinner and the dogs slept…a lot. Not many pictures today as I just didn’t have the energy!

Unfortunately the worst place to camp near is a body of water. Despite leaving two doors open and having the dogs on their beds outside, everything was soaked in dew this morning, including my sleeping bag and clothes…and Kye. She wasn’t happy, although Cody was fine. I’m not sure how she ended up so wet.

I finally crawled out of bed to use the trail-head facilities at 6:30am and the sun was barely peaking over the trees. I knew it would be a while before the sun reached my camp so I hauled all my gear except the tent to the parking lot to dry out. It looked a little trashy to have my stuff strewn everywhere, but what are you gonna do? I made coffee, including burning my finger on the pot handle, and ate breakfast while waiting for stuff to dry and finally got packed up by 8:30.

I filtered water and waited for the tent to dry as much as possible and left Dalton Lake at around 9:30am. 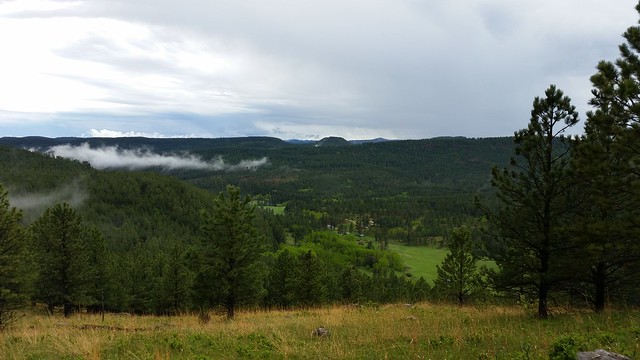 Felt pretty good and strong for the first few miles. My legs were a little sore but felt strong and I powered up the hills pretty easily. There were few views but the trees were gorgeous and it felt like I was hiking the east coast or England with all the underbrush. The bike ramps became the bane of my existence and I quickly grew to hate them, as did the dogs, but they were easier than opening gates. 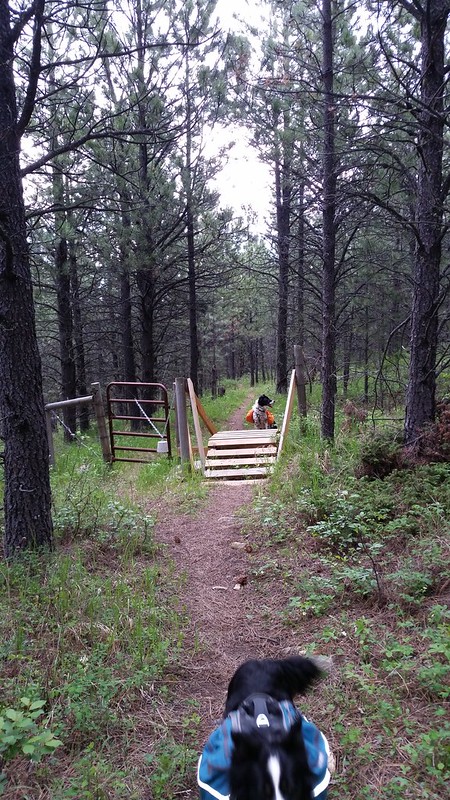 I watched the grey clouds of a rain storm and thought it was circumnavigating us but God had other ideas and we got nailed with quite the hail/thunderstorm for at least a half hour. I donned my rain coat and hunkered down under a pitiful tree that offered very little protection, thinking about the perfect rock overhang a half mile back. 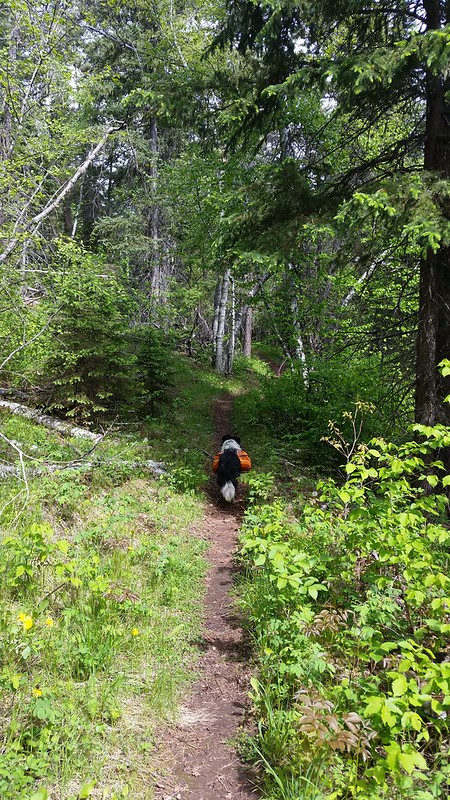 After being pelted with rain and hail for a half hour, and with lightning hitting above us, the destruction finally abated and we could continue. The trail was now horribly muddy, I was soaked and cold and the dogs’ packs were wet and heavy. We hurried as best we could along the trail, going down off the mountain as my shoes attracted mud and pine needles like honey attracts flies. It was pretty miserable although I did manage to capture the odd view of the valley. 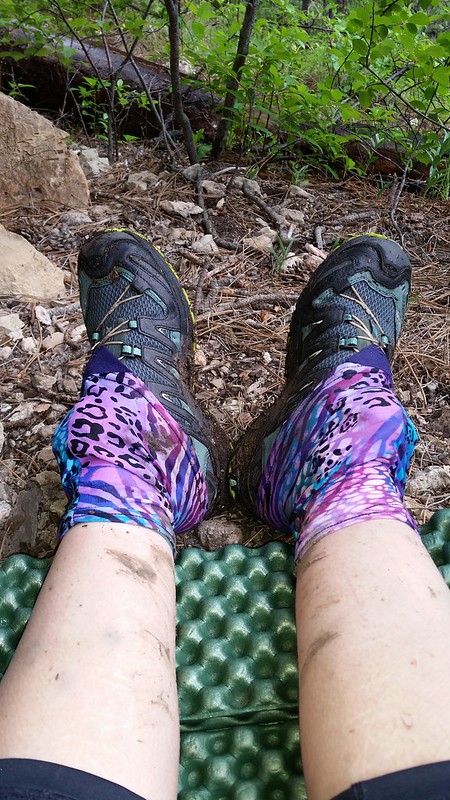 A couple of hours later we got hit with another rain storm, but this time I had a little warning and was able to find shelter beneath a natural rock shelter. I’m not sure if this was a mistake, but it sure felt like it because that’s when my leg muscles started to seize up. We avoided the rain, but walking after that became my own kind of hell. 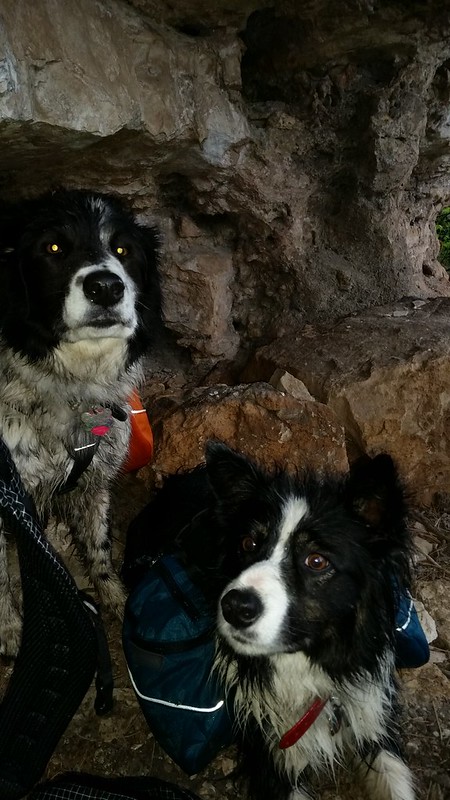 My hamstrings and quads loosened up a little as I hiked but any time we stopped they would start causing problems. At this point I didn’t want to stop to drink or eat and was just plodding along.

The scenery was incredible and I appreciated the views of the gorge I was following. It felt like I was paralleling the South Dakota version of the Grand Canyon. It was a shame that there were few view points where I could get any good pictures and I hated that I wasn’t enjoying the hike as much as I would have liked…I really pushed myself too hard yesterday. 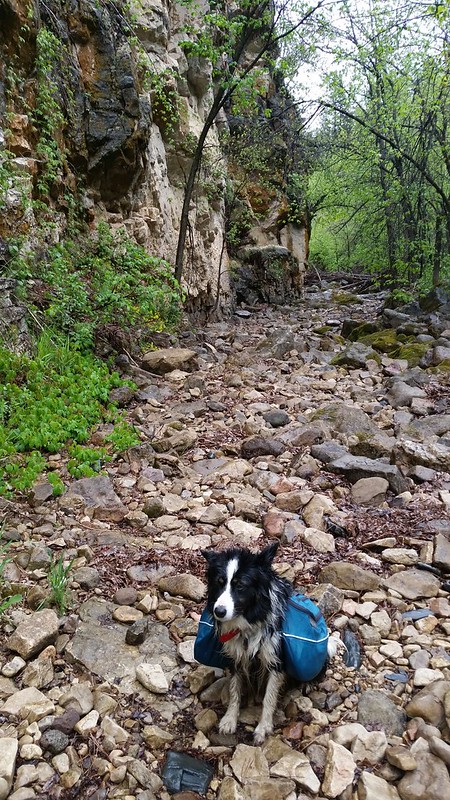 We finally arrived at Elk Creek Trail Head, and after watching Kye limp for the last two miles I made the tough decision to end my hike there. The nearest highway was 2.5 miles west and Kye and I gimped along the road to hopefully hitch a ride. It was humiliating to have to quit but with Kye limping I wasn’t going to take risks, not to mention that I could barely walk with a hamstring and quad strain. I can tough myself out, but I wouldn’t push my dogs through that point. 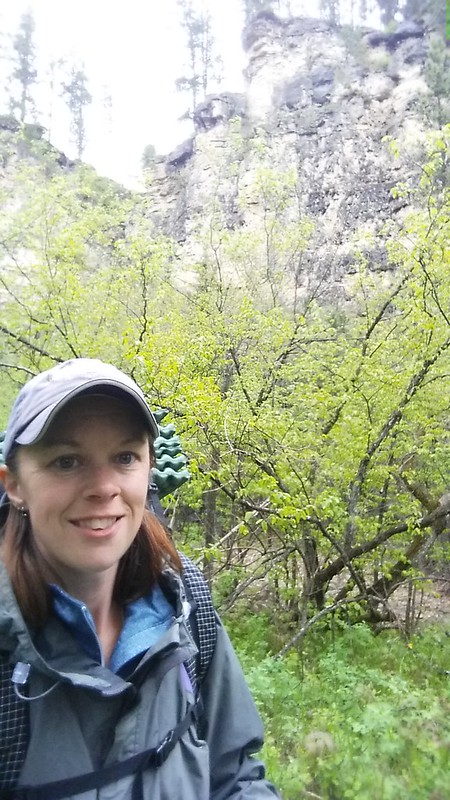 I have never hitch-hiked before and felt a little intimated but I didn’t have much choice. It started raining, and the dogs and I were pretty miserable. I started praying pretty fervently at that point…I needed help. Somehow, some way, two guys going the wrong way decided to turn around and offer me a ride…they barely had room in their car for me and the dogs but they were willing to find room for us all and deliver me and the dogs to mu truck; my first experience of true Trail Magic (Google it!).

We drove back to the Elk Creek Trail Head to spend the night in the truck and I had to life Kye in and out of the vehicle assuring me I had made the right decision. I was bummed I hadn’t been able to finish the last 11.5 miles but I knew it was the right thing to as I could always come back. 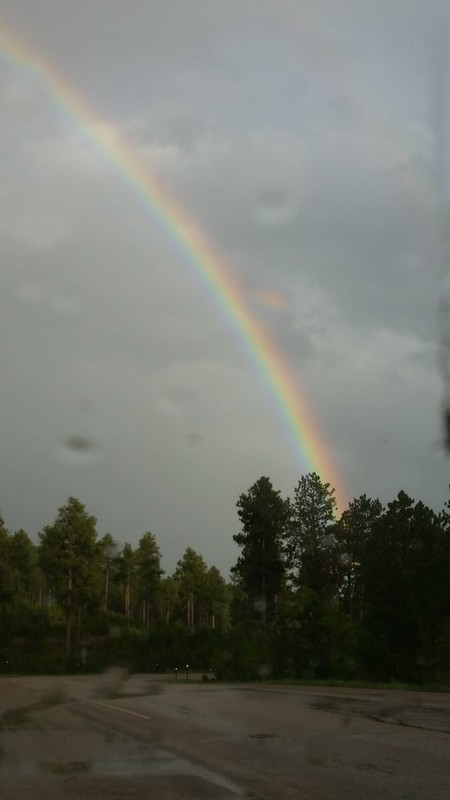 In the truck we cleaned up a little and I watch Captain America: Winter Soldier before going to bed. I slept like a rock!

It may not have been a hiking day but I decided to explore the Black Hills a little more. I had been here over Thanksgiving a few years ago but missed a lot due to the season.

I made the decision to go to Wind Cave Nation Park that I had missed the last time due to it being closed. It was well worth the $12 entry fee. It was a rare cave that contains 95% of the world’s box style etc mineral deposits. 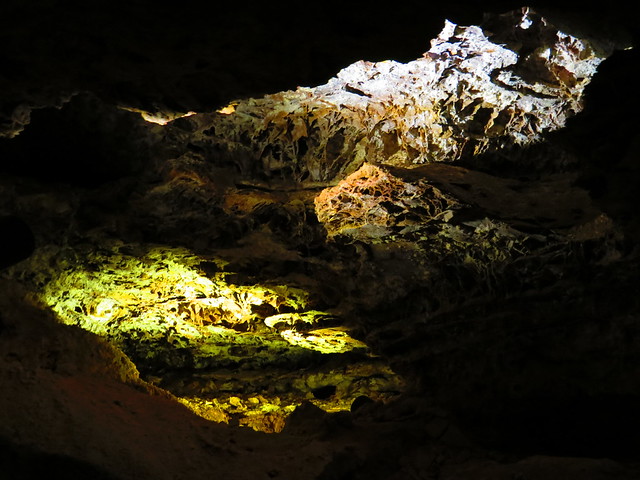 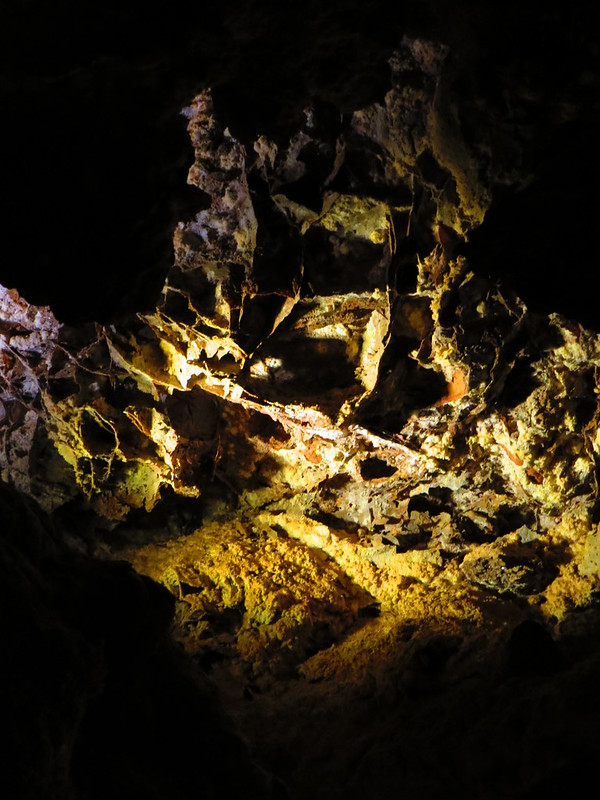 We stopped at a random campsite in the Black Hills NF for the evening to spend the night, enjoying a couple of beers and some old-time country while drying the remainder of my backpacking gear. The dogs were happy to run, relax and be free from the truck and dog packs.