Monday was a very quiet start to the week although it ended up being more eventful than I had planned. My UK passport was due so I sent in the renewal application for that, went to the bank, did yet more grocery shopping and then returned home for lunch.
After lunch was when things got exciting and mom asked me for some help with car shopping. She had been in need of a new car for a while but had procrastinated because her old car was still running well…but peer pressure from others had convinced her she really needed to get serious about looking, somewhere other than the internet!

Somehow the first place we looked had exactly what she wanted, coming in under her budget and checking all the boxes of things she wanted in a new car. Being the smart people we are we asked all the necessary questions and then left to go check out a few other used car lots. The first one we checked out, and the only other place my mom was convinced there might be some other good options, was fairly grimm. With that place checked off and some breathing room to decided my mom was convinced that the first car was the one she wanted…so we went back and took a test drive, and I did some basic checks under the hood.

With both of us that certain that it was the car she wanted we waded through a few negotiations with tires and then the paperwork until mom had signed the papers committing to a new (to her) 2014 Ford Fiesta in dark blue…pretty snazzy little car. We pick it up this weekend. 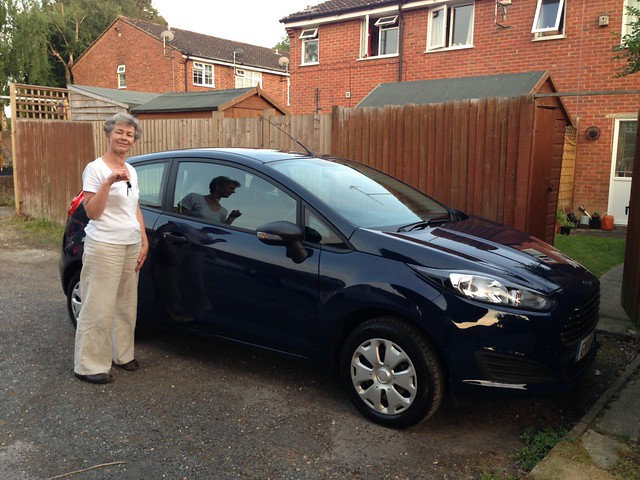 Tuesday mom had to go back to work which left me with not much to do. I walked to the station and caught the same train as her, although getting off a stop later in Ashtead…the town in which I spent the middle part of my childhood.

Having never explored Ashtead Common before I meandered along a series of paths surrounded by verdant undergrowth, avoiding blackberry brambles that crowded the trails, with limited success. Pathways scattered in dozens of different directions as walked beneath massive oak and beech canopies, and it felt incredibly peaceful. I saw few people and those I did see all had dogs…it made me miss Kye and Cody all the more since I knew how much they would have loved exploring the common. Can you see the heron? 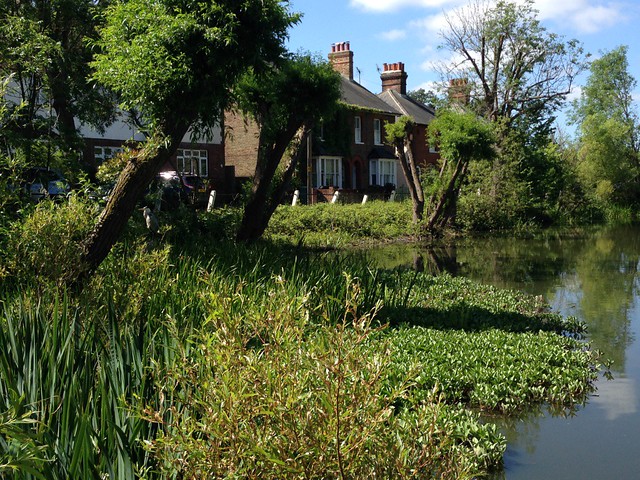 The path eventually returned me back to the station and I took a brief detour to an old familiar memory….Ashtead Pond. A man and his son were feeding the ducks and I did not want to disturb them so I circumnavigated the surprisingly-brown water and came across a heron perched on an old log. He didn’t seem spooked by me so I took a couple of pictures, watched a few fish grabs flies from the surface and headed back to the station where I caught the next train to Leatherhead.

Leatherhead was the town where I spent the older and last years of my childhood, right up until I was 18 and moved to the US so it holds some good memories for me. Not much had changed in the town center as I strolled by the store fronts; some stores were new and had been replaced but some were still the same stores as 20 years ago. It felt comfortingly familiar.

From the town I took the river walk, an old favorite of mine, along the River Mole and heading west out of town. I was heading for another place that held amazing memories for me, Wildlife Aid. From 1995-1998 I worked as a volunteer, cleaning cages, feeding injured or orphaned wild animals and helping with rescues and releases, including a couple that were aired on their TV show “Wildlife SOS” in the first season…it was one of the most rewarding and satisfying things I had ever done and I loved it. 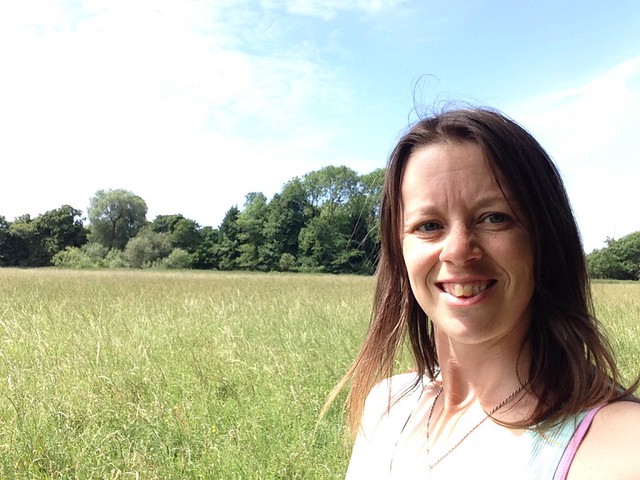 Sadly Wildlife Aid is not open to the public, not even former volunteers, and Simon (the founder) was in a meeting so I didn’t get the chance to chat. It was amazing, from the little that I could see, how much the center had changed and grown in twenty years. A brisk walk back to the station in the slightly-oppressive sunshine and humid air brought me to the platform just in time for the next train to Horsham. I arrived back at the house just in time for lunch and to enjoy a relaxing afternoon in the warm sun while typing up blog entries

Thursday saw the beginning of another busy and long day. Walking to the station with mom instantly made me regret bringing an extra layer as it was very warm already. I had a bad feeling that all I would be doing was carrying my light-weight hoodie.
Mom caught her train to work and I crossed the platform to get the faster train to London Victoria train station where I was meeting my cousin, Siân, and her husband, Byron. After a successful meet-up we made our way to the Science Museum via the Underground and a subway tunnel.

I had forgotten how large the Science Museum was. There was so much to see across 4 floors and I knew we wouldn’t get to see more than a small portion of it. We started with the “Wounded: Conflict, Casualties and Care” which was one of the temporary exhibits the Science Museum does in order to keep their content fresh and educational for repeat visitors.

The Wounded: Conflict, Casualties and Care focused on the medical side of World War 1, following the care injured soldiers received on the front lines and in the trenches and then through their journeys home for rehabilitation and recuperation. It didn’t just include information about the care these soldiers received but also how medical practices improved and how better equipment was invented in such a short period of time to deal with the huge variety of injuries and maladies, as well as the huge number of soldiers affected. It was the first war that had seen chemical warfare and old medical practices were initially not equipped to deal with the aftermath. Many soldiers feared gas more than any other aspect of the war they were fighting. This exhibit was of particular interest to Siân and I as our great grandad had served in the medical aspect of the army, taking care of hundreds of soldiers himself.

From the injuries of World War 1 to steam-powered engines we saw and read about the initial stages of early energy production. Large steam-powered pumps and machinery was initially used to pump water out of shallow mines, to drain wetlands and to pump water to towns. Later improvements saw the introduction and development of locomotives and traction engines with ever-increasing horse-power and efficiency, much like modern combustion engines. This was another exhibit that hit a personal note for me since my grandad, who had recently passed away, had spent much of his life building various steam engines and pumps. 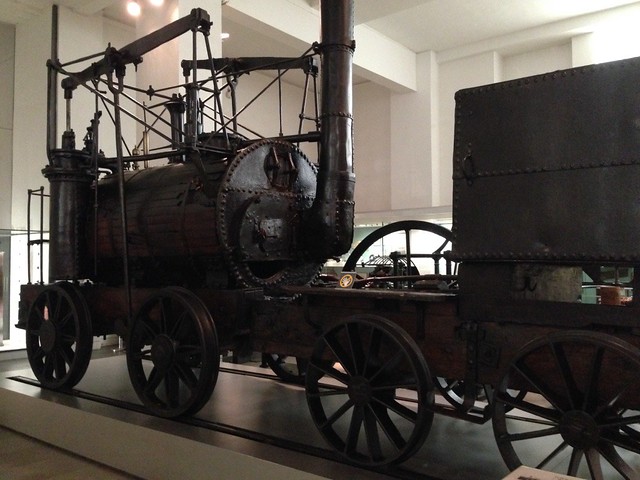 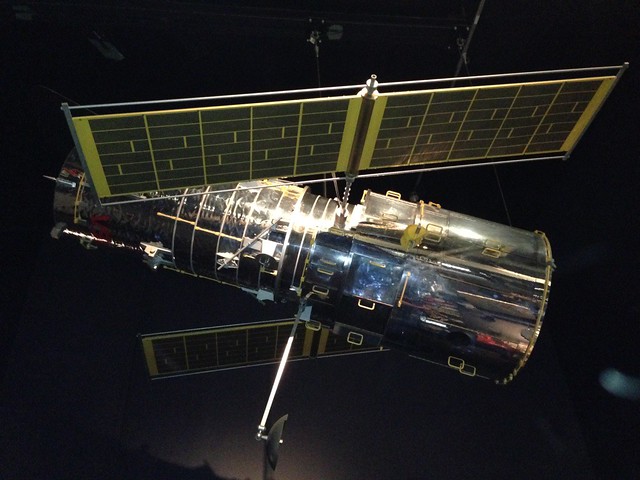 From steam and energy to space, we traveled with astronauts to the moon, looked at photos from Mars, read about Jupiter’s moons and imagined Saturn’s rings. We were taken inside the life on man on-board a space shuttle and how they stayed cool in their space suits, grimaced at what they had to eat for extended periods and had an odd degree of interest in space toilets. A temporary, visiting exhibit, made possible by a co-ordinated agreement between Russia and the UK, gave us some unique insight into the life and history of, Valentine Tareshkova, the first woman in space, but who also did so solo. Again, there was so much information it was hard to absorb it all. 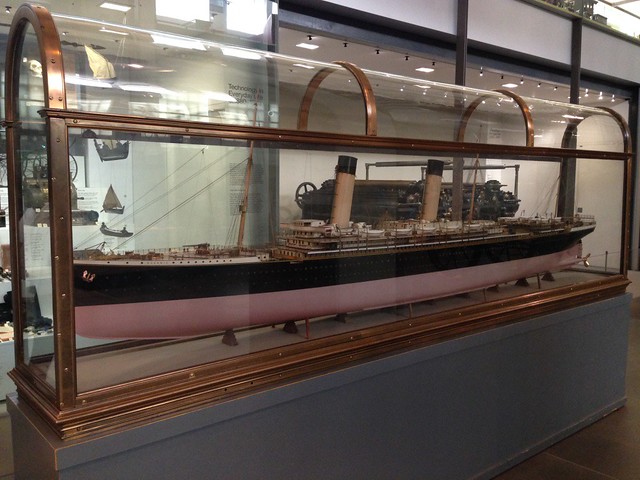 From Space exploration we stepped back 250 years to the “Making the Modern World” exhibit. The Making the Modern World gallery presented some of the Museum’s most remarkable objects. It charted a quarter of a millennia of science and technology and presented some iconic items that have shaped our society. We came face-to-face with the Apollo 10 command module, Stephenson’s Rocket, Babbage’s Difference Engine No. 1, Crick and Watson’s DNA model and the first Apple computer. 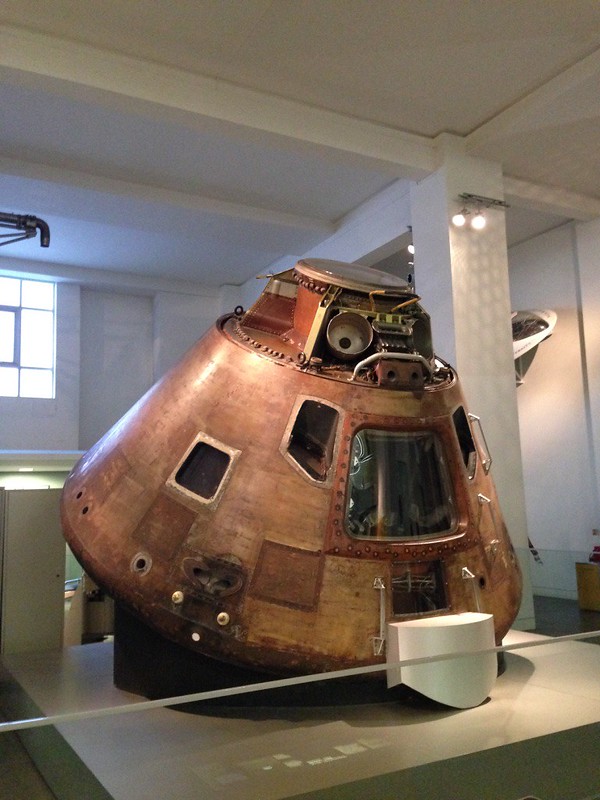 Thought-provoking objects such as penicillin from Fleming’s laboratory, a porcelain bowl salvaged from Hiroshima and a clock that will tell the time for the next 10,000 years helped to round out the collection of thousands of historic and modern pieces of equipment we have used over the decades.

The final gallery we meandered through, cursing our lack of time and feeling a serious case of information overload, was ironically the Information Age exhibit. This hall followed the journey of communication technology from the first radios to the modern call phone and how each iteration led to the next. The one thing that I felt was missing from this gallery was the influence of the Linux operating system in the modern world, used by 3/4 of major “back room” operations around the world.

We finally gave up trying to add any more information into our already over-saturated brains and decided it was time to head home before the work rush-hour and crowded trains. We said our farewells and departed home.