After a long day on Thursday, and knowing Saturday would also be busy, mom and I kept Friday easy and simple. After a quick grocery shop to supply for my nan’s visit we packed a picnic and headed 16 miles south, by car, to Cissbury Ring, an old iron-age fort that is classed as the best preserved hill fort in Sussex. 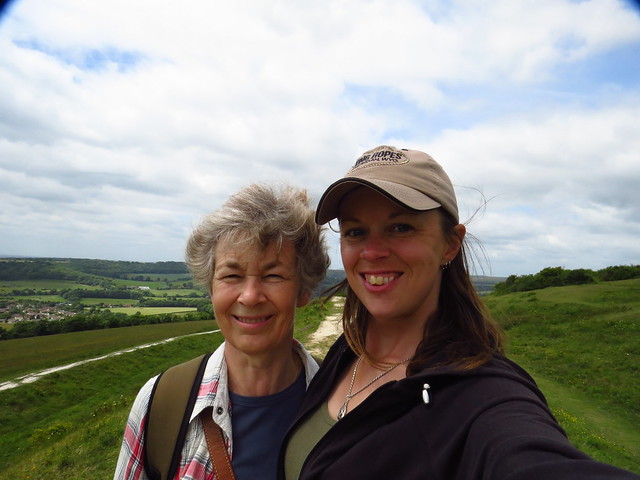 It is estimated that Cissbury Ring was built around 250BC with a double rampart, and ditches on the outside of each, with two gates on the eastern and southern sides. It covers and area of almost 75 acres. It would have been impregnable by other hostile forces with the weapons and tactics of the day. However, while inter-tribal war and skirmishes did happen the forts were more of a deterrent to inhibit conflict, similar to the nuclear weapons of today.

Cissbury Ring is in a beautiful location that looks out over the south downs to the north and the English Channel to the south, with green rolling hills full of immaculate farm fields and trees in every direction. While life at the time would have been hard they certainly picked a beautiful place to live it. 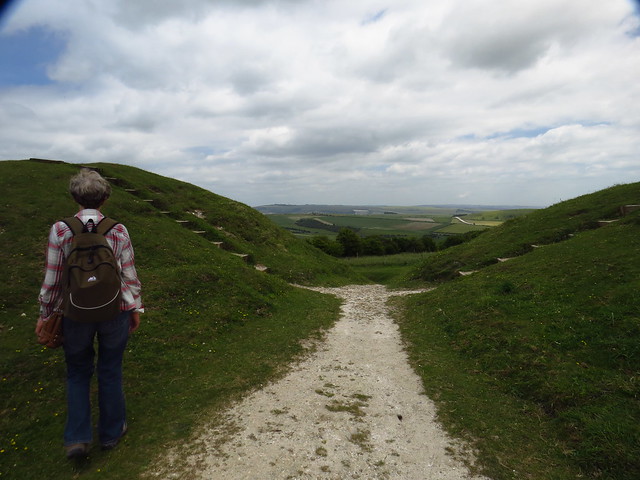 After walking around the fort and admiring the views and taking photos of the semi-wild herd of horses that grazed the area we made a brief pit-stop at a very old local pub with a beer garden for a quick drink. It was a very pleasant way to end the short hike and enjoy the sun. Notice the one with a strange lion-like “mane” under his belly; I’ve never seen anything like that before on a horse. 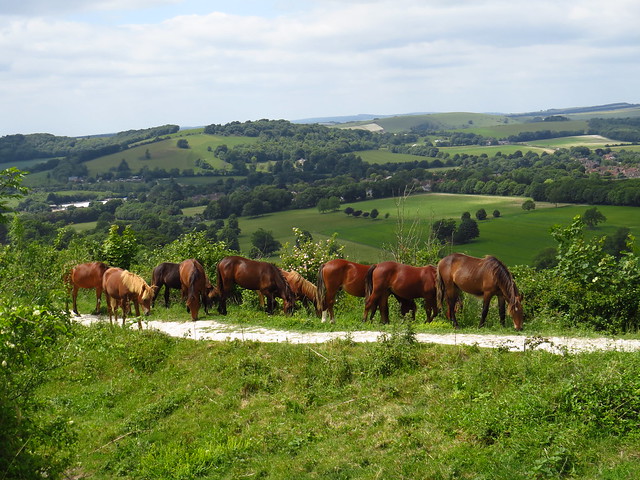 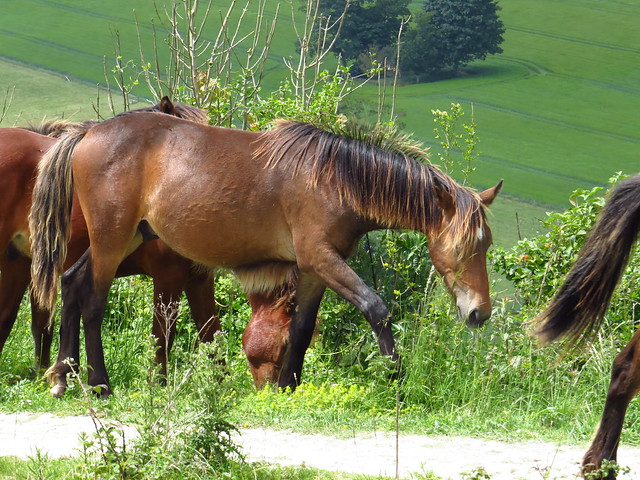 Friday evening saw me taking the train to Sutton, a suburb of London, to meet up with my two best friends from high school, Melanie and Uzma. We had decided on an inexpensive but well-recommended Italian restaurant near the station called Casa Nostra. Mel and I met on the train and arrived early so we asked to be seated at out table, ordered a drink and chatted while we waited for Uzma to arrive. We reminisced about our school days, and in the grand tradition of our friendship we had a very attractive Italian waiter who flirted shamelessly…of course, still being single, I obliged and flirted back (back when were 15 or 16 the waiters were too old to be interested in us “kids”). We talked about the “old” days and what our families were doing, where our jobs had taken us and what our plans for the future were. It was an awesome evening to be spent with friends I haven’t seen in a while but who have been a large part of my life for over 20 years. It was good to see them. 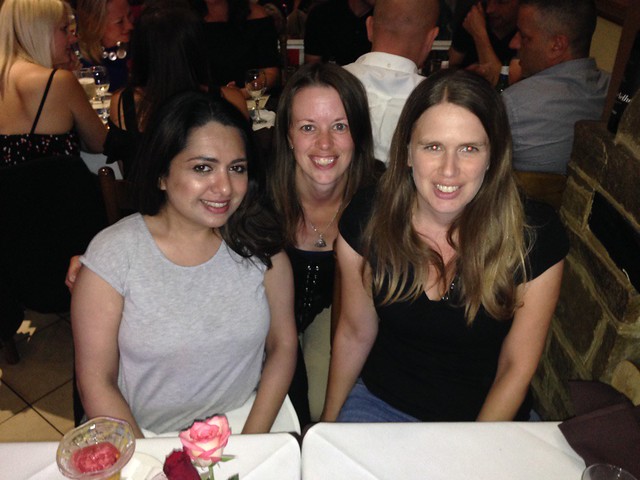 Saturday had been planned more than a month ago, before I left the US. I had been looking for medieval festivals or renaissance faires that might be taking place while I was in England and found a small event happening at Arundel Castle. It also happened to be only a few stops down the tracks from Horsham which made it extremely convenient.

Arundel Castle is a stately home and a medieval castle with Norman roots. It was originally founded on Christmas Day in 1067 by Roger de Montgomery, Earl of Arundel who was one of William the Conquerer’s most loyal barons. Arundel Castle is one of the longest inhabited country houses/castles in England and many of the original structures, including the Norman keep, the gatehouse and barbican, and the lower part of Bevis Tower survive to this day. In the late 1800s the house was almost completely rebuilt in a Gothic style and is considered to be one of the great works of Victorian England. 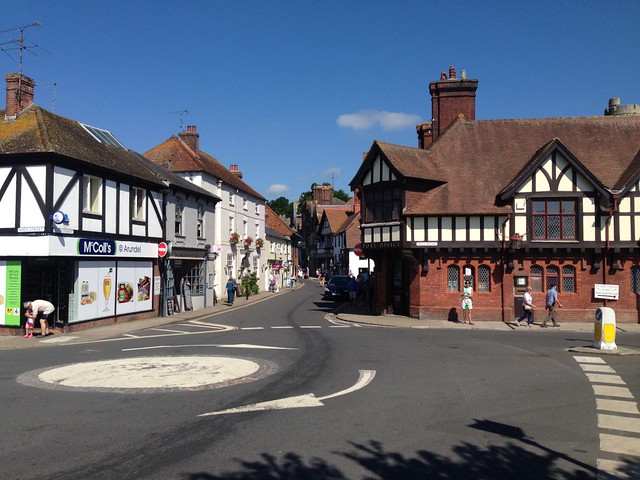 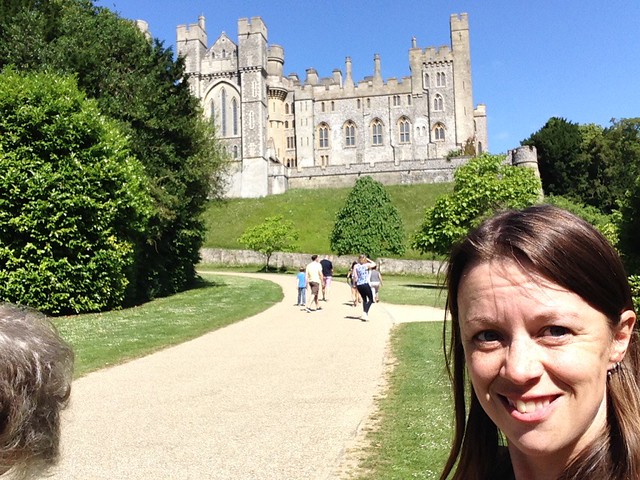 Upon arrival at the castle mom and I meandered along the winding pathways with magnificent views of the castle walls and towers before settling down in the shade of a large tree for “Story Time” with a bard recounting some of Chaucer’s “Canterbury Tales”. 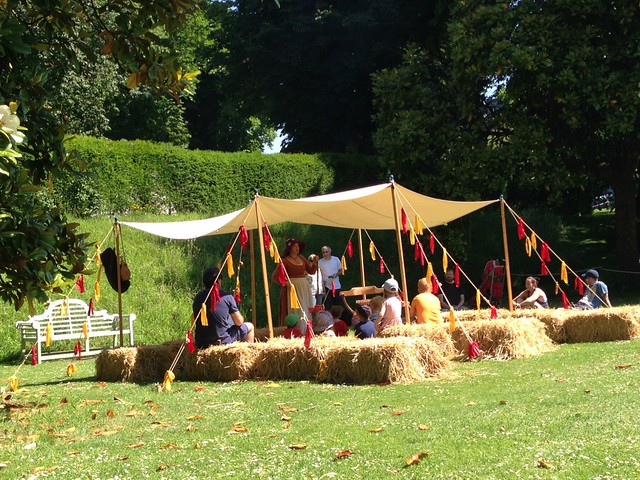 From the tales of medieval England we made our way past the hog roast to the tents of the knights donning their armor in preparation of battle. We found another shady spot (prime real estate on such a hot day) in some long grass and waited for the event to begin. The event was a live-steal and full armor event which meant real-but-blunted blade, full shields and full suits of either plate armor or maille. 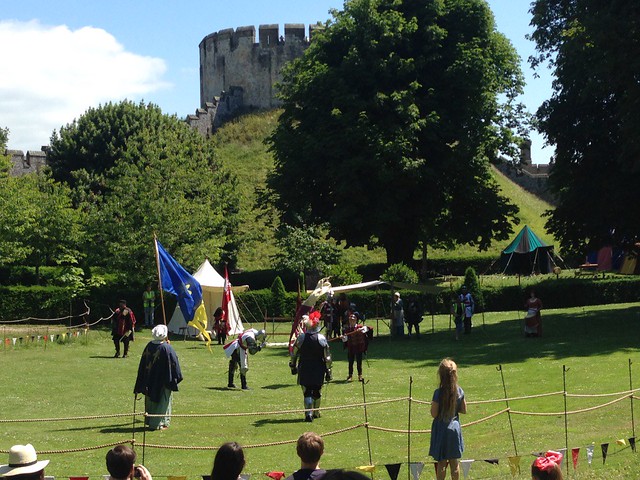 The battles were a cross between SCA and the Armored Combat League and were continued through until submission upon the part of all but one combatant. Some battles were one on one and others were last-man-standing melees. It was a fun half hour cheering for or booing for whichever contestant the audience chose to support…mostly raucous loyalty for England and a lot of thumbs down and hissing for the French. The Danes and Poles were left somewhere in the middle. 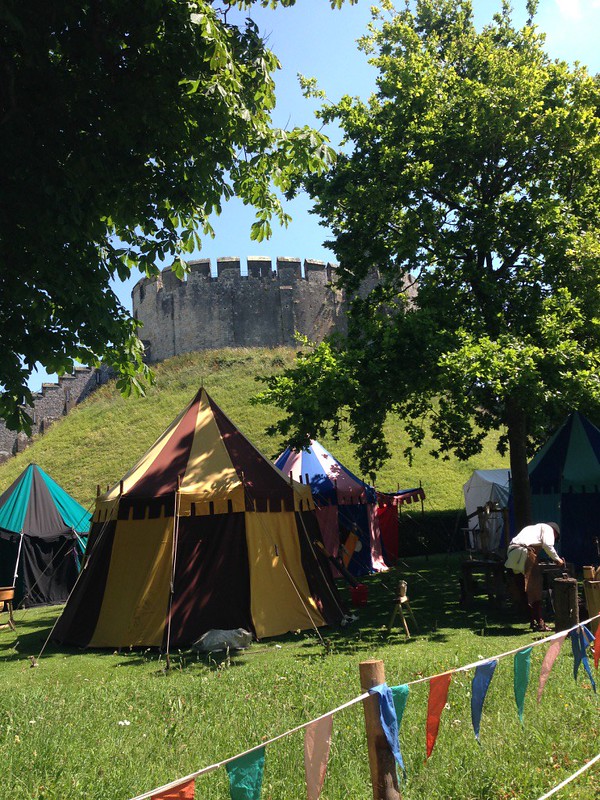 We enjoyed the hog roast for lunch, although it was a lot of food, and then made our way through the castle to the ancient Norman keep. The information inside the keep detailed the life of various members of the household, including soldiers, officers, musketeers, the King’s Cavaliers, a Lady in Waiting to the lady of the house and more. Sadly no pictures were permitted inside the castle itself but I did manage to sneak one or two on my phone. Outside of the buildings photos were permitted and I attempted to capture the grand scale of Arundel Castle and all of its buildings and walls but with limited success….it was just too much to fit into a series of pictures. 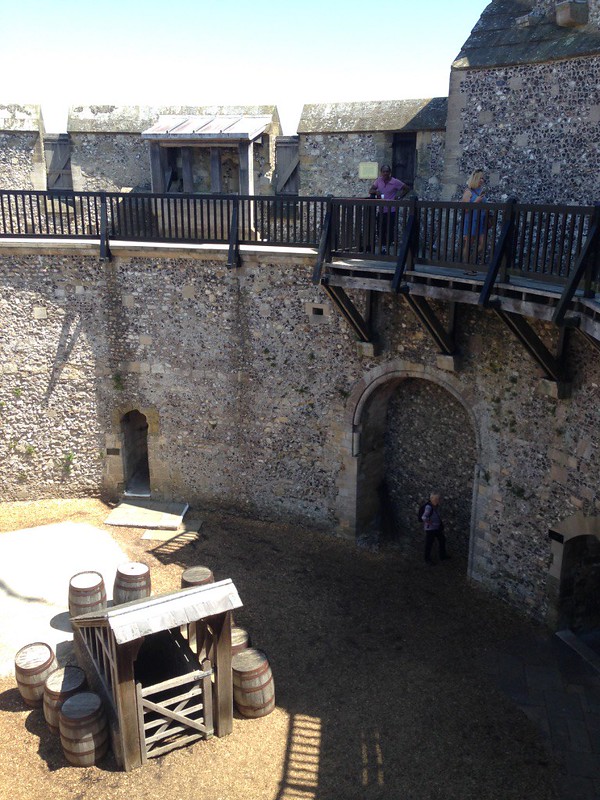 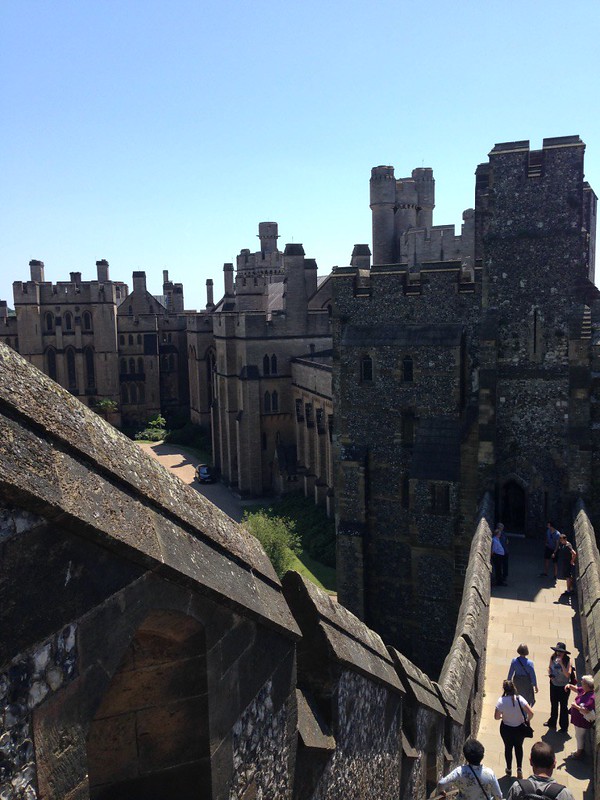 A break for tea or lemondade was taken after the tour and we almost fell asleep as we settled into the large couches in what was once probably a cellar or kitchen of some kind, before it was open to the public. We were trying to kill some time before the falconry display. 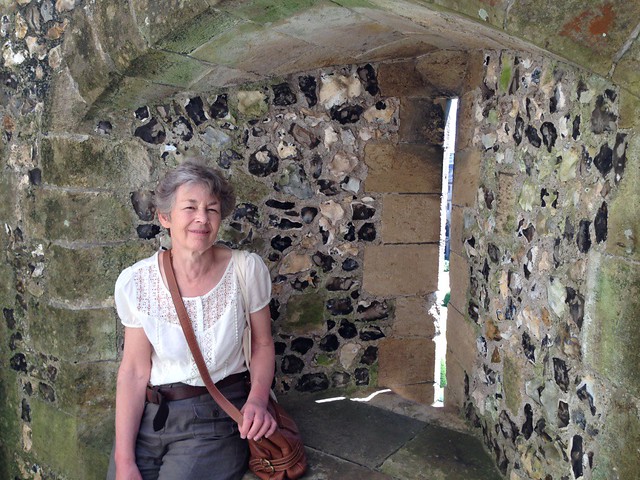 Finally we could find no excuse to stay and keep a table occupied and we strolled back through the lush gardens to the display arena, again finding a shady spot from which to watch. Sadly this time the whole thing was interrupted constantly by a young Chinese guy behind us Skyping with someone, who we guessed to be his girlfriend, during the show which was somewhat distracting.

We enjoyed the show and watched their Barn Owl, Benny, show off his moves although he was definitely slightly confused when commands he understood came from the speakers. Second was Neo the kestrel who was only 9 months old. Sadly for the falconer the bird’s age showed during the demonstration and he disappeared for a while and was almost impossible to bring back. Finally they did manage to call him back but it did shorten the rest of the show. The last bird flown was a peregrine falcon called JJ. He was beautiful to watch fly and they had to use a flying lure for him due to his speed. It was certainly incredible to see him dive for the lure and hear the whistle of the wind over his wings. 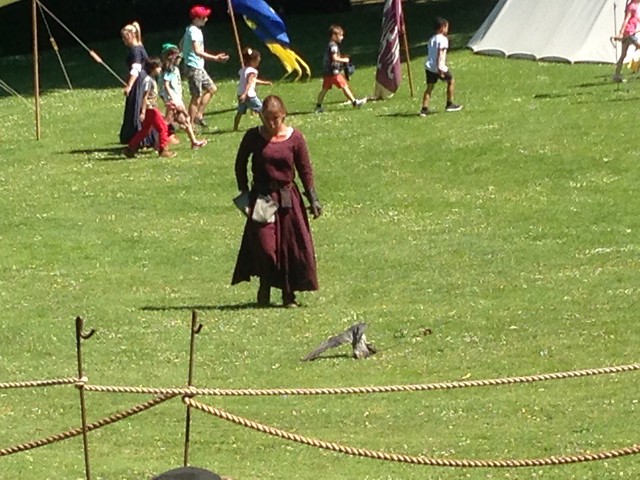 The falconry display was the last event we stayed for. We headed for the main gate to head to the small town of Arundel outside of the castle walls but got briefly diverted by the rose garden that was in full bloom. The flowers were stunning and the heady scent was almost overwhelming in the heat. It was a stunning place and very much a little sanctuary.

I had voted for ice cream earlier in the day and so we stopped in at a little tea shop as we explored the medieval town, although mom thought hers was too large and too indulgent. It was very good ice cream and well worth the pause to eat it at the war memorial.

A brief but hot walk took us back to the station and we headed home, tired and sweaty but having had an amazing day. 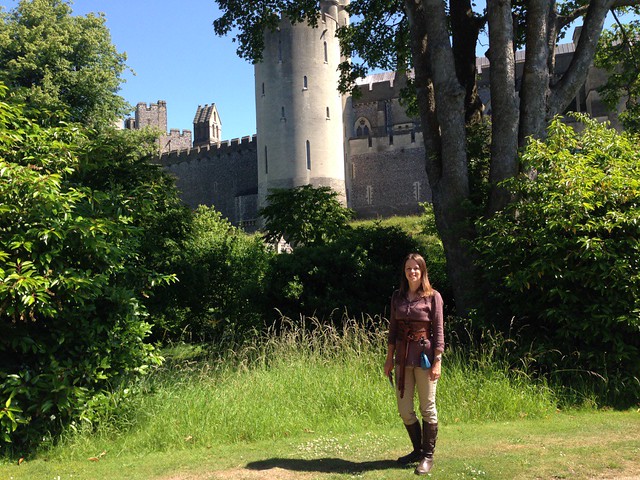 My heart was heavy this morning as I staggered out of bed and sent my dad an email to wish him a Happy Father’s Day. Of course I missed my dad while he was in the US and I over here but what weighed more heavily on me this morning was my grandad’s memorial service. The funeral service, open to one and all, had been held at the beginning of May but my nan had very kindly and lovingly suggested holding a brief memorial and burying my grandad’s ashes during my time in the UK. Today was that day, all the more special and emotional for it being Father’s Day.

The vicar said a few words of faith and remembrance as my mom, my uncle and my nan lowered the box into the hole. Ashes to ashes, dust to dust, and those who chose to laid flowers and dirt in or around the grave site. It was an emotional time and tears flowed for some, but not all.

To make the occasion lighter and more celebratory of life rather than the sadness we all felt the entire family (minus one husband who had to work) went to lunch at a local eatery called The Red Start, a restaurant/pub establishment a mile or so from the church. It was the first time we had all be together since my cousin’s funeral in 2013. It was a lunch of great conversation and family memories and I made sure to get family portrait in the beer garden after we were all done with lunch and the bill had been paid. It will likely be the last photo we have of us all together. 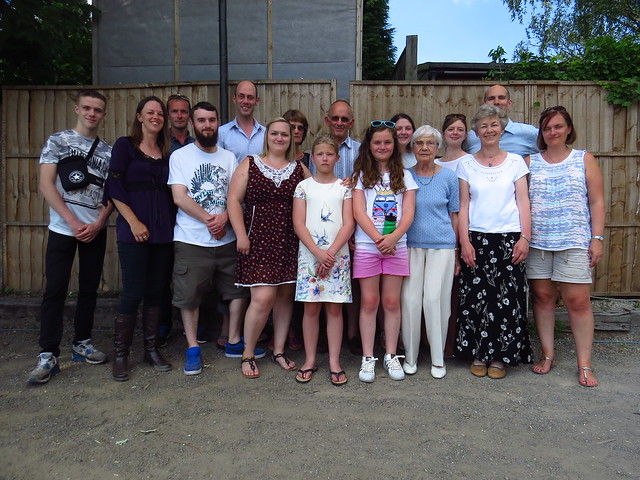 It may have been fate, or the gods smiling on us, that we ended up at that restaurant on Father’s Day as they were having a Viking event in the beer garden. While the day was a somber the feeling was light and I enjoyed watching the Viking warriors battle it out in the arena and teaching some of the kids how to use and sword, axe and shield. Sadly, it was another one of those things I didn’t get pictures of as I was more concerned about talking with family.

With lunch over and the afternoon turning into evening we met my nan back at her house. I took the chance to spend a few moments alone in grandad’s workshop, viewing the last train he had been working on before he died. It was a beautiful engine with saddle-style water tanks along side the boiler. It was so close to completion. This was the place I knew grandad best and was a more fitting place for me to say my final goodbyes than the grave site. The familiar plastic bags still covered his old but precious lathes, drill presses and grinders, among other various pieces of classic metal-working machinery. I still felt his memory and spirit around me in that place and my fondest memories will always be watching him construct these beautiful steam engines from scratch. I dug through some of old scraps of metal in a box on the counter top that grandad had fabricated but discarded and took a couple of random pieces that would remind me of him.

The train he was working on when he passed away: 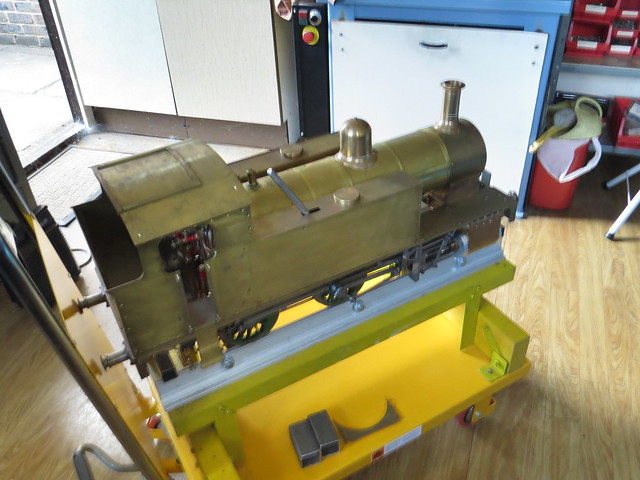 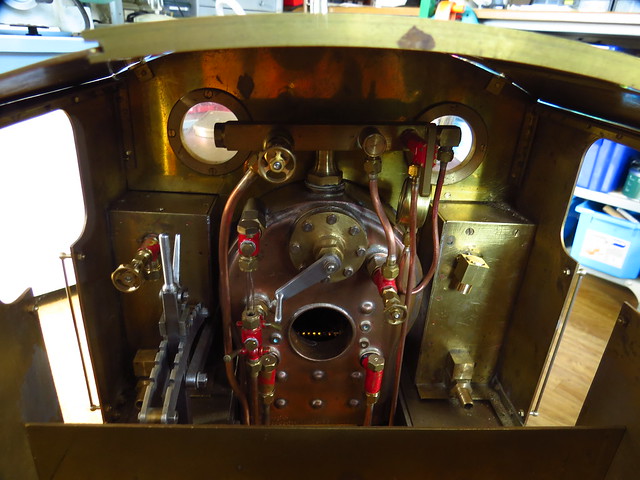 Finally, as the temperature of the day started to cool slightly we packed nan’s bag in the car and headed home. She would be spending the next few days close to mom and me in a local B&B to get away from things for a short while. This was exactly what I had wanted to focus my trip on…spending time with grandparents who I knew didn’t have too much more time left. Sadly I missed out on seeing my grandad by two months but I will make the most of the time I have with nan.