It was still insanely hot and humid Monday morning when we went to meet nanny. It was mid-morning by the time I had walked to the B&B from mom’s house. Mom had inadvertently dropped a very important piece of mail somewhere along the route and had to turn back to find it….eek…but I continued in order not to keep nanny waiting. We met mom in the center of Horsham. Most of the day was spent perusing the many shops in search of an ever-elusive, not-too-long plain skirt for my nan…and we never did succeed. Lunch was a brief but enjoyable stop at the cafe in the Waterstone’s bookshop afterwhich we left nanny at her hotel for a nap while mom and I headed home. Nanny was raring to go again around 4pm and mom went to pick her up so she could join us for dinner. 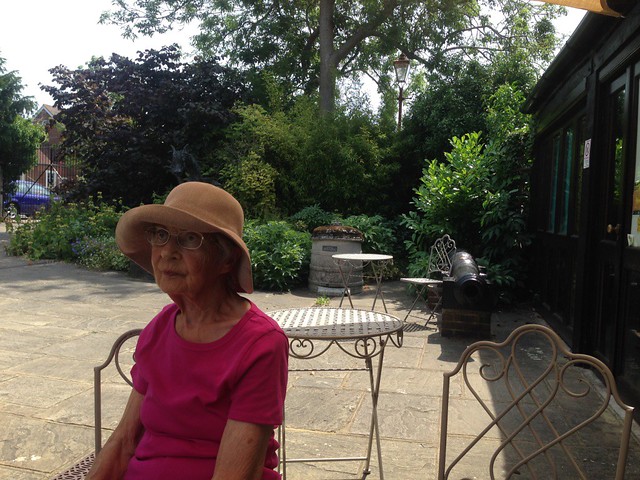 Tuesday and Wednesday continued in much the same way, although without mom as she had to work. Nanny and I enjoyed conversations and walks in the beautiful park and manor house gardens, we watched shirtless guys playing soccer and sweating profusely in the heat, we stopped with young moms and nanny bubbled with effervesence as she talked to the babies, something that brings her great joy. We had lunches at outdoor tea rooms and in an old but air conditioned restaurant that once used to house the council offices. We wandered through the local museum and went to pick out nice gifts of wine snd chocolste for my mom and sister. I learned how her and my grandad had met and courted, I heard more stories about the war and her childhood and I listened to funny tales of my mom when she was growing up. When we were tired and fed up of being hot we headed home to enjoy the cooler confines of the house and shaded garden while sipping on a beer (me) or a cup of tea (nanny). I got to spend a lot of quality time with my nan, and take some wonderful pictures, and it is time I will hold in my heart for the rest of my life. 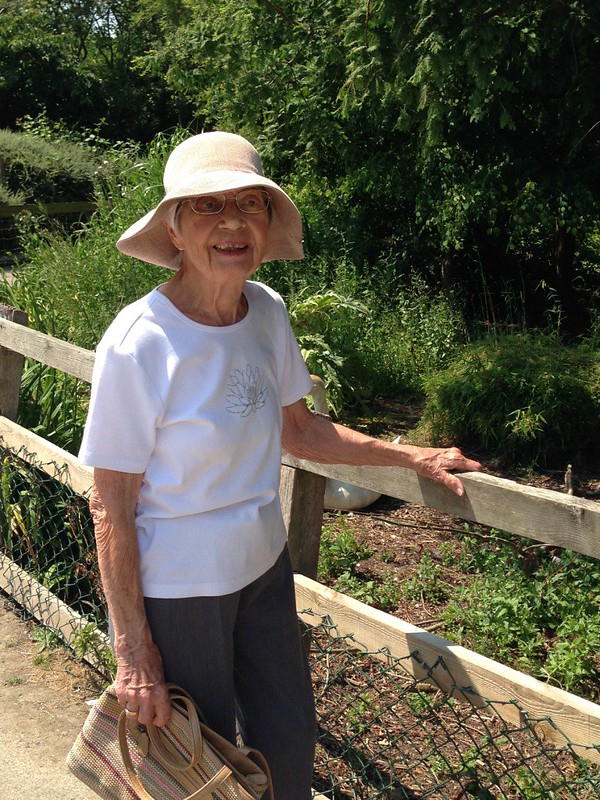 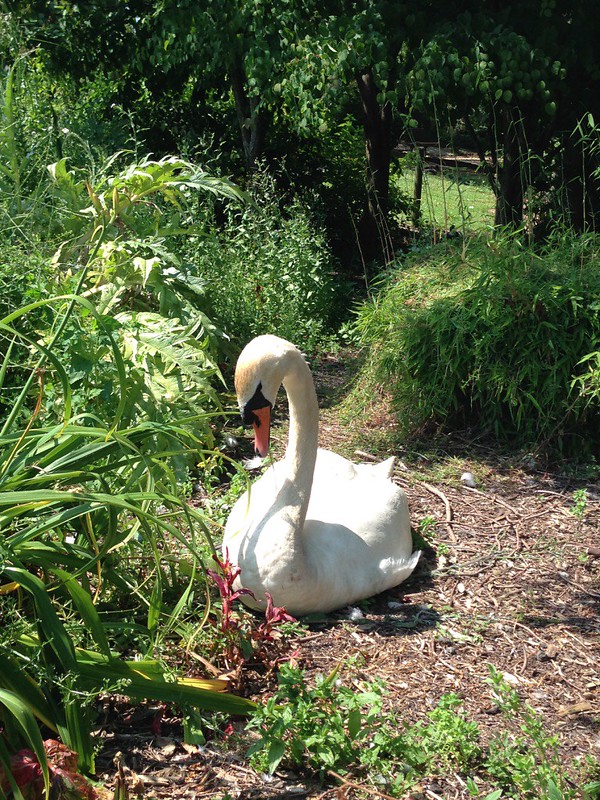 Nanny joined us on Thursday as we headed to my sister and her boyfriend’s (Adrienne and Chris) house where I was staying for a long weekend. It was the first time either nanny or I had seen their house since they had bought it three years ago and the full renovation has only just been [mostly] completed. It was stunning and it was amazing to think they had done a large portion of the work themselves. It was a HUGE project but their house was stunning, especially the massive walk-in shower that, with a couple of hanging ferns, could have been the set for a shampoo commercial.

The afternoon saw us heading to Chartwell, the famous home of Sir Winston Churchill. Chartwell was bought by the former English Prime Minister in 1922 and it was his primary residence until he died in 1965. In 1946, when it appeared that financial constraints would force Churchill to sell the property, it was bought by a consortium of his friends, led by Lord Camrose and donated to the National Trust for Places of Historic Interest or Natural Beauty, on condition that the Churchills could remain until their deaths. Churchill continued to live there until October 1964, when increasing frailty forced him to leave Chartwell for the last time and confined him to his London home. 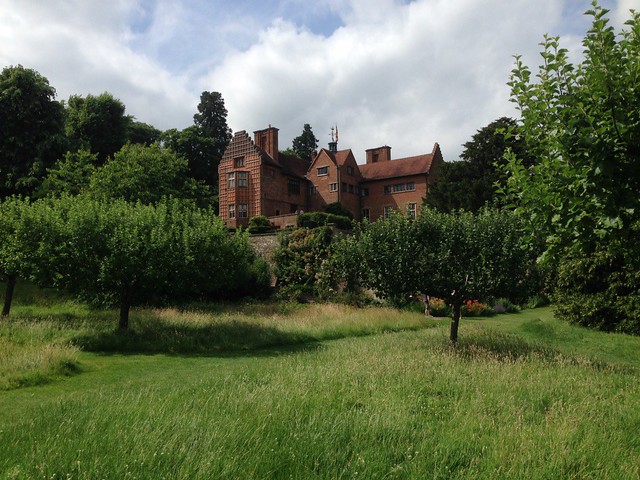 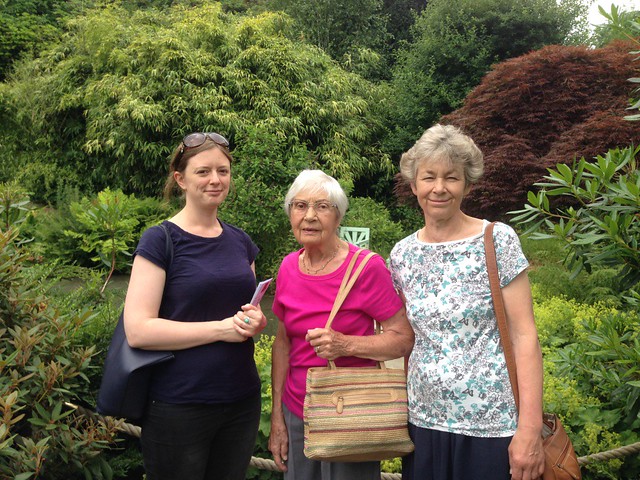 We did not purchase the house tour but wandering through the rose and kitchen gardens was more than enough regal splendor for all of us. Of course my poor sister was seriously suffering pollen allergies at the time and we didn’t stay more than a couple of hours. And in grand British tradition, no visit to a stately home or historic site would be complete without the obligatory cup of tea. 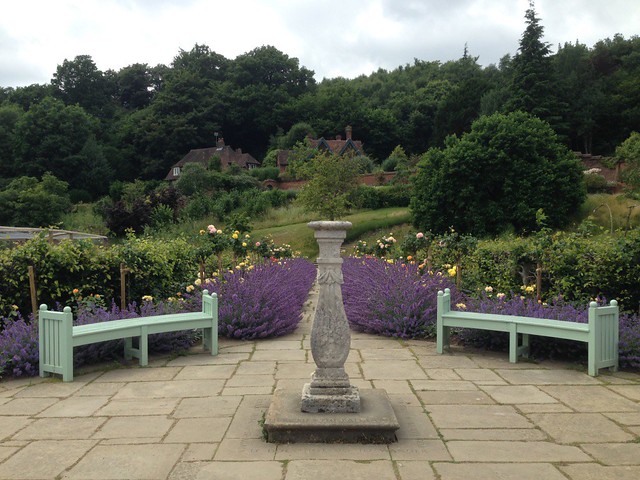 On Friday I awoke to a much more gloomy sky, and much more British weather but that was not deter Adrienne and me as we headed to Hever Castle, not 5 minutes from their home. Knowing my love of castles and all things medieval Adrienne made this visit, plus lunch, her portion of my birthday gift.

Hever Castle, located near Edenbridge and 30 miles south-east of London, is the childhood home of Anne Boleyn, Henry VIII’s second wife. Henry inherited the castle after the death of Anne’s father in 1539. It also, in the later years of Henry’s reign, came into the possession of his fourth wife, Anne of Cleves as part of the settlement from the anulment of their marriage. 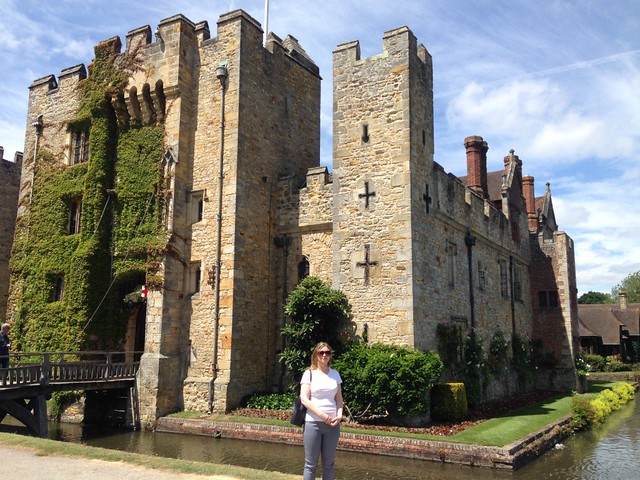 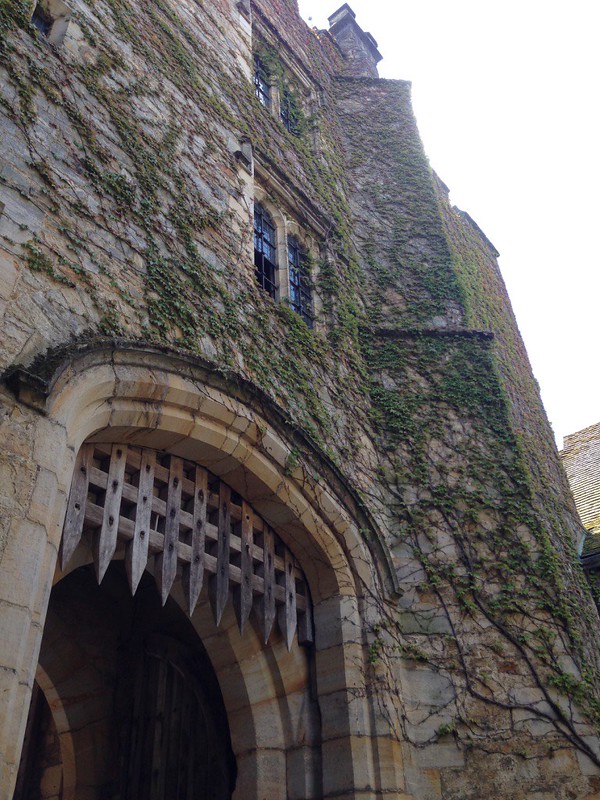 Hever Castle went through three distinct periods of construction, renovation and repair in it’s 900 years. The original and oldest part of the castle, the gate house and walled bailey, dates back to post-Norman time and the time of the Plantagenets in 1270. In 1462 the castle was inherited by Geoffery Boleyn, Anne Boleyn’s great-grandfather, who restored and converted the castle, which was in dire need of repair, into a manor and added a tudor dwelling within the walls. The final renovation, completed by William Waldorf Astor, and American millionaire, was undertaken after he bought the castle in 1903. It was used by the family as a residence until 1983 wherein it was sold to a private company as a conference center, although the castle and grounds remain open to the public. 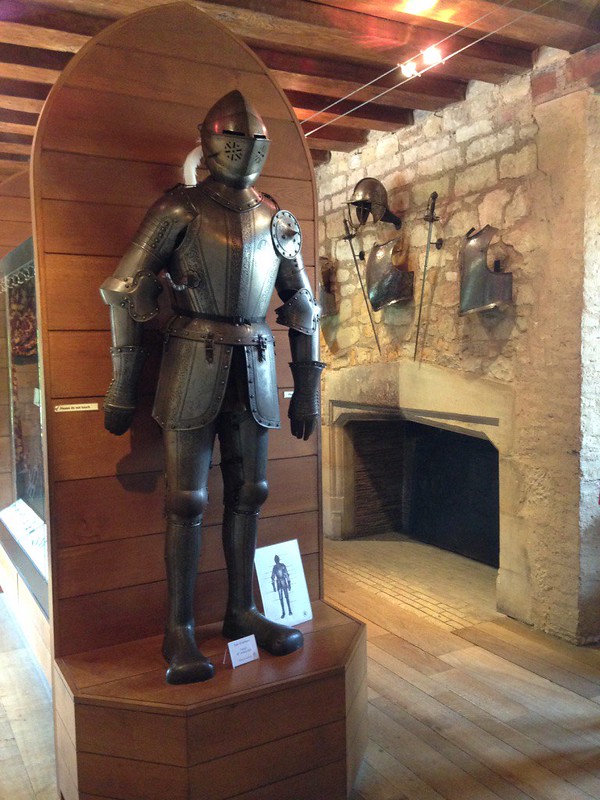 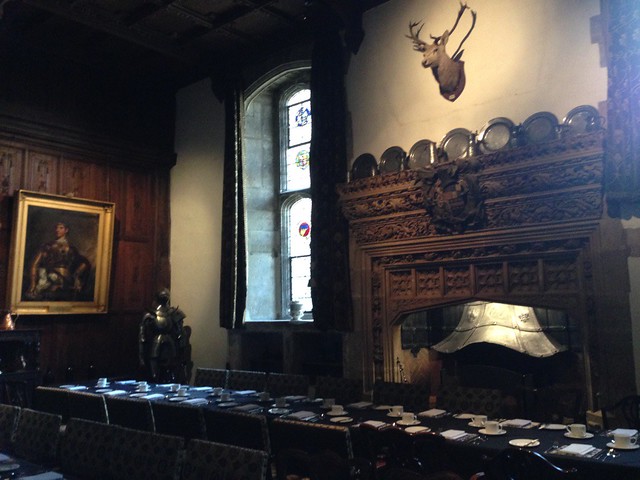 Sunday took us a Bough Beech Reservoir and the nature reserve where we planned on hiking a 2 mile loop near the lake. What started out well sign-posted ended in, not surprisingly for me, a complete and total lack of signage. We ended up walking 10 minutes the wrong way on a country road, dodging minimal traffic thankfully, before we turned around and headed back to the last signed gate on the opposite side of a wheat field. We found a second trail that was also sign posted and dared to follow it. Again, it was well signed and an obvious path…for a while…but once through another gate the trail and the signage once again disappeared. We were left to guess where the route was supposed to go, and unlike the badly signed Centennial Trail where I had a map and could make a good chice, we had nothing to go on. After wandering around for 15 minutes on the far side of the pasture I gave up looking and crawled through the fence. Two more fences and one minor barbwire injury later and we were back at the start. We debated getting a cup of tea or coffee but I was in the mood for something slightly stronger and we headed home to enjoy a movie and a beer or two. 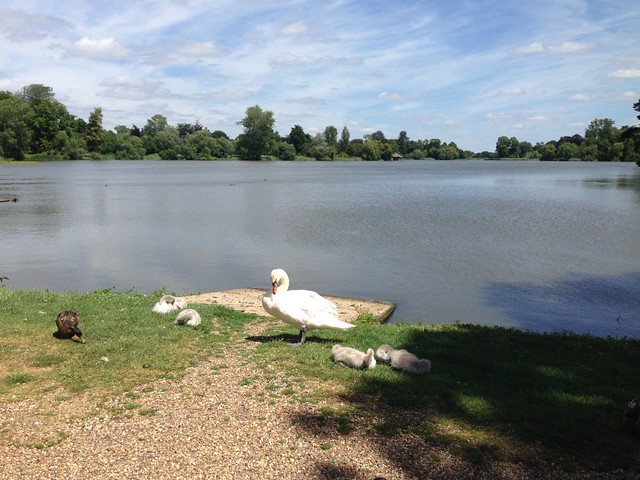 Adrienne and I had a quiet dinner before heading to the station to catch the next train back to Horsham at 8pm where mom was waiting to pick me up an hour later.