I awoke to grim-looking clouds on Monday morning but they soon gave way to brilliant blue skies and vibrant sunshine.

Mom and I packed a lunch, jumped in the car and headed to Bignor Villa, the site of a roman settlement dating from 200-400AD when it was destroyed. It is a villa known for its high quality mosaic floors which are some of the most complete and intricate in the UK. It was discovered in 1811 when a farmer plowing this field hit a stone. The mosaics themselves are only aboout 3 feet below the surface and it surprising that they had not been destroyed by pervious plowing of the field. The mosaics found at Bignor Villa include the head of medusa, and one of the goddess Venus with gladiators above a hypocaust, an underfloor heating system. 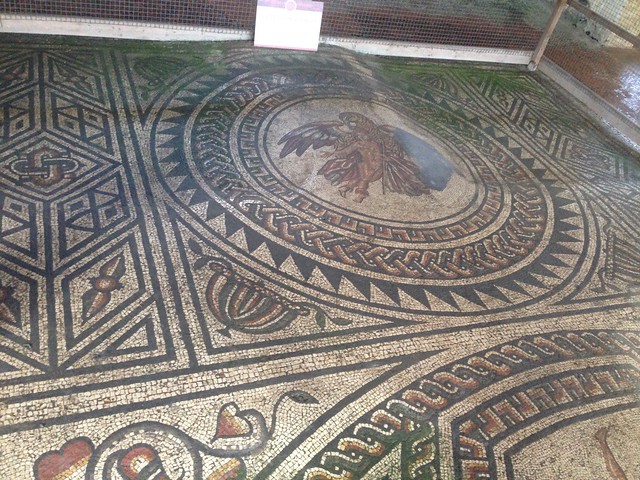 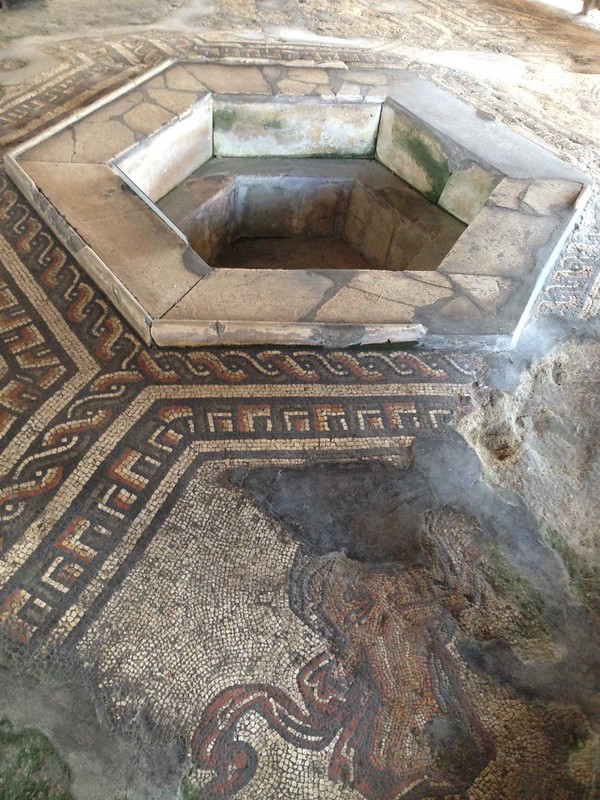 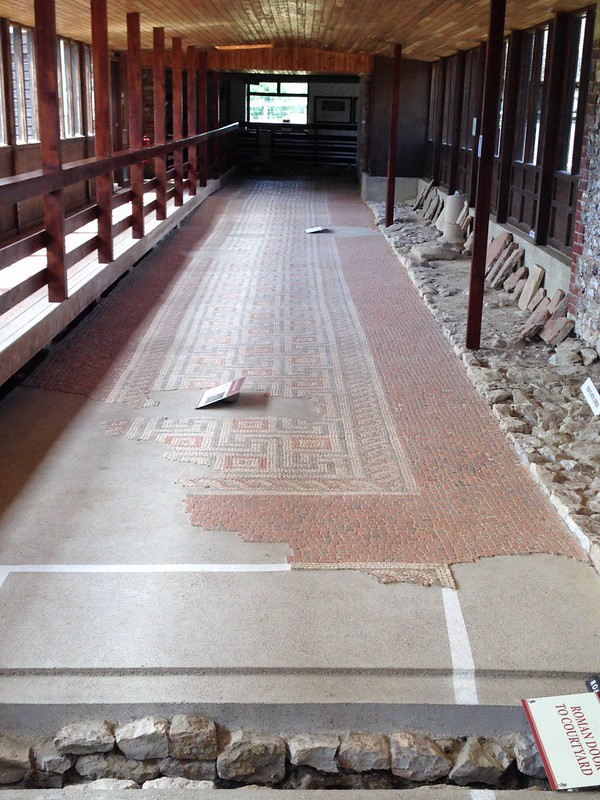 The short tour of the intricate mosaics did not take much so we ate lunch and headed out for a 3 mile hike in the south downs. A pretty trail guided us by a medieval church, across grasslands and fields until we reach a culvert and a pretty creek where we decided to turn back and try our luck at a local pub that was just off the path. Sadly, being Monday, it was closed. It certainly was in a good location to cater to thirsty hikers. With no cold beer to slake our desire we headed back to the car and drove the 1/2 hour home, making a brief stop to pick up my morning supply of “coffee” aka diet Pepsi for the next couple of weeks.

Tuesday and Wednesday were pretty uneventful as my mom had to work so I spent the days catching up on laundry and wandering around Horsham town center looking for a new pair of jeans. Shopping is exhausting and I generally don’t enjoy it, and this was no exception. I did finally find what I was looking for after a few hours of looking but I was unimpressed by most of the choices and the reintroduction of high-waisted jeans and other fashions that harken back to the 80s. There were almost no low-rise jeans in sight.

Thursday brought more clouds and overcast, cool weather and we headed to Basingstoke in Hampshire to the Milestones Museum, a 19th century replica town built inside a huge arced building. 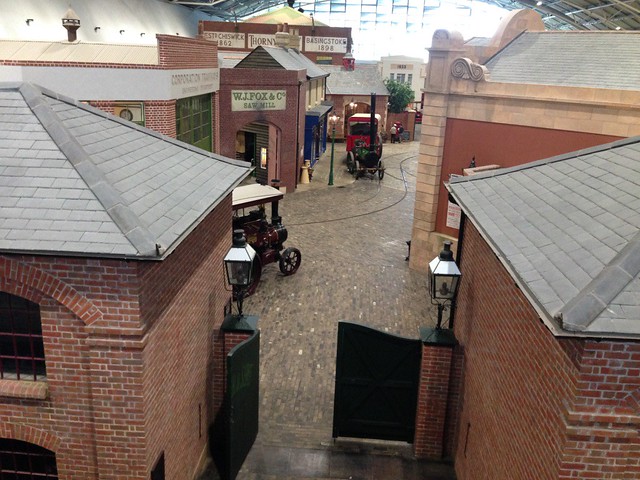 We borrowed one of the free audio guide handsets and followed the guide through various workshops, trades, stores and streets of Victorian England. Most of the information we learned was local to the specific area including the production of steam equipment for farms and road building such as traction engines and steam rollers. There was a replica firehouse in one building with historic ladders, tanks and carriages that saw the dawn of the fire service. A mill and lumber yard could be found near to the fire station with full-sized saws, log moving equipment and horse-drawn wagons complete with human figures frozen in action. 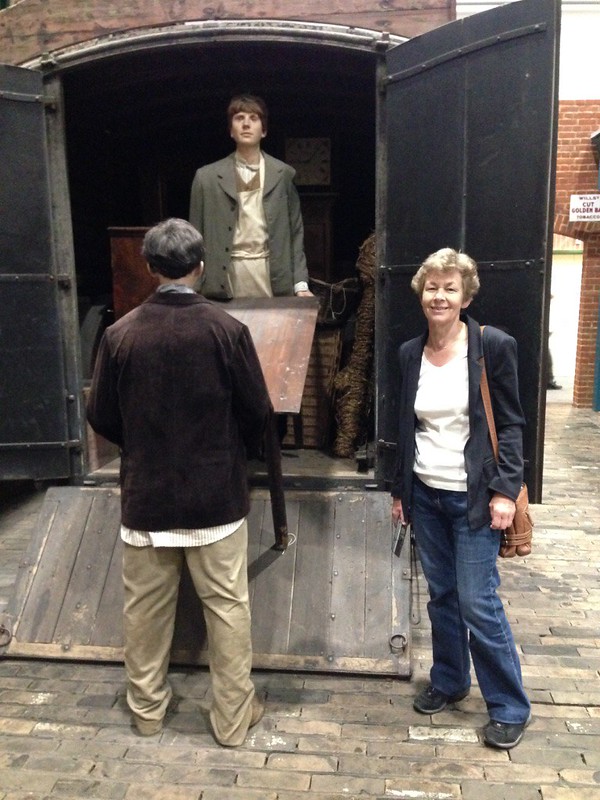 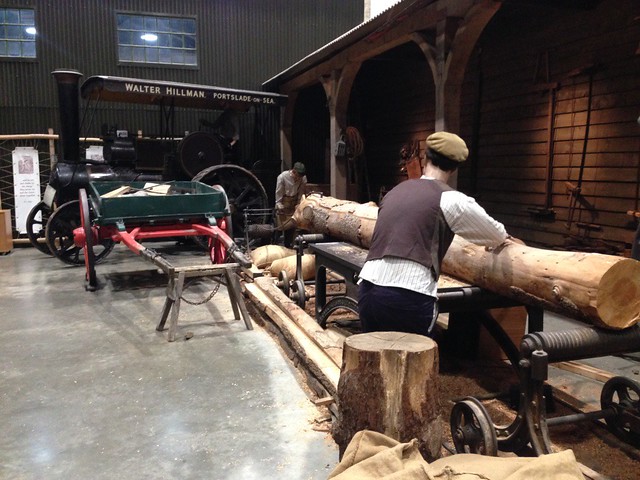 We perused the hardware and toy stores before reaching the old pub just before closing where we enjoyed a beer and a cup of tea and read a few pages of a newspaper dating back to WW2. 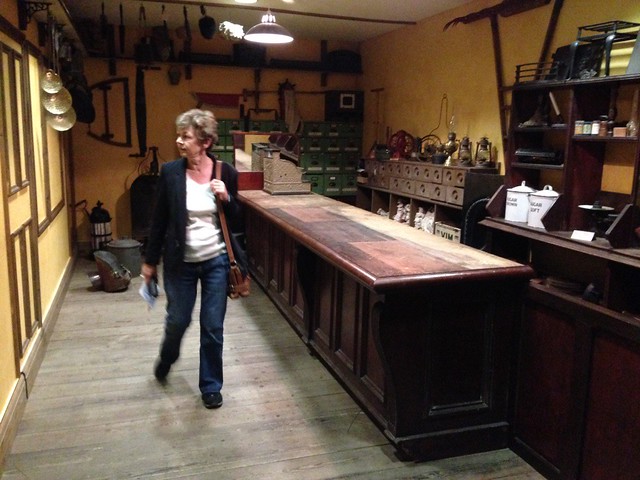 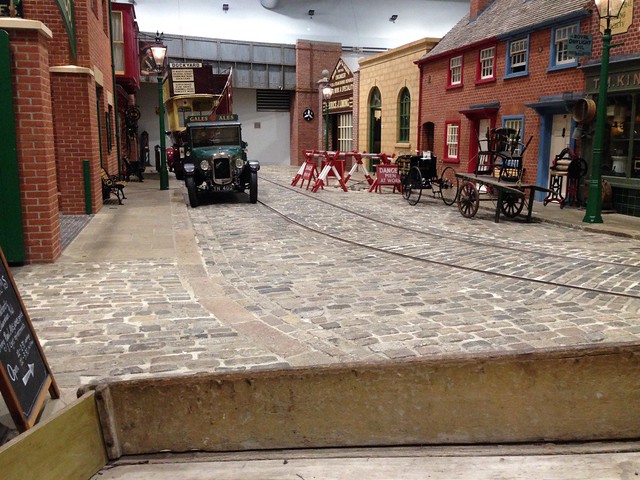 Many restored and refurbished old vehicles, from buses and trams to tractors, trucks and hand carts were parked along the cobbled street curbs, adding to the air of nostalgia that the town provided. There was so much to look at and we paused at the Olde Sweet Shop to buy a small bag of sweets, sold by the ounce in white paper bags. We munched on the shared dolly mixture, an old favorite of mine from childhood, as we explored the last few shops and wandered between the old buildings towards the old-style railway ticket office, steam engine, and horse and cart loaded with coal. 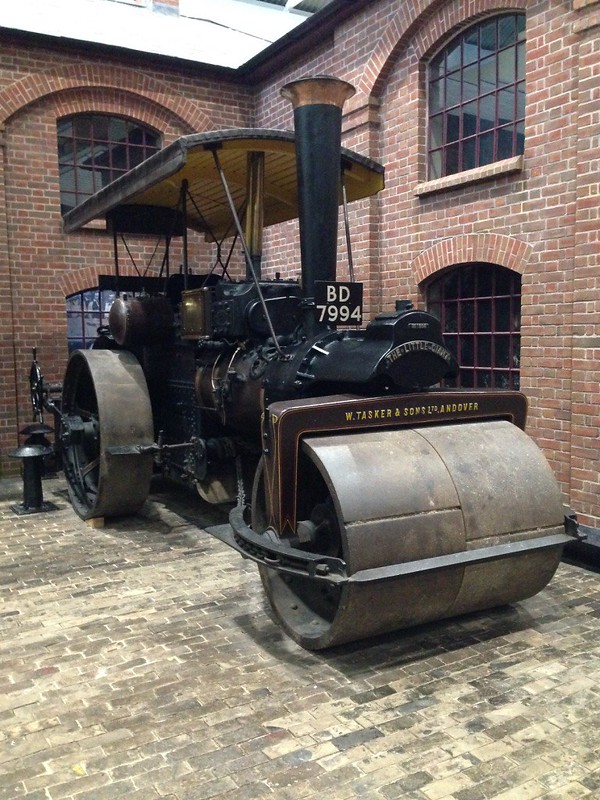 Milestones Museum was a step back in time and was created with an imersive experience in mind, which included the staff in the pub and sweet shop being in period dress. A room near the front of the museum also provides clothes for children to borrow and dress up in the garb of the time. It was well worth the longer drive to visit and spend a couple of hours learning more about the 19th and early 20th centuries in such a hands-on and realistic environment. 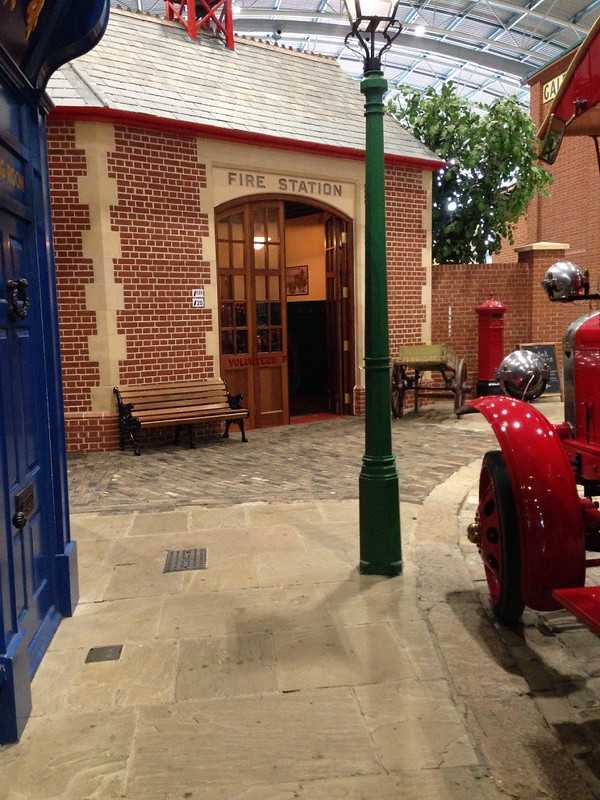 Mom dropped me off at Horsham station with my day pack and lunch where I bought my return ticket to Amberly, the closest town to the South Downs Way. After a short trip down the tracks I reached Amberly with a number of other backpackers who were equipped for overnighters rather than just a day hike.

From the station it was a quarter mile roadwalk to the trail. I was following a guide I had found on line but the trail was well signposted and I only checked the guide once to make sure I was turning the right way out of the station. You can find a great guide to the whole trail here: South Downs Way Guide

The first part of the hike followed a narrow but straight country lane next to some farmed fields to the crest of the hill. It wasn’t steep but I could certainly feel the lack of recent hiking in my working muscles. The road soon curved to the right and the trail turned left, still climbing as it wound beneath some trees. The cloud cover was intermittent which made it pleasant and not too hot but it was humid and I was soon sweating profusely. Once on top of the downs the path leveled off. There was very little variation in the direction of the trail and it was contained between two fences for almost the entire route. The views to the north, over the Arun Valley, were pretty and green and were similar to the stunning views to the south but which also included a view of the English Channel. Sheep and cattle became very familiar faces along the trail, especially after the restrictive fences either side disappeared and the trail was more open. 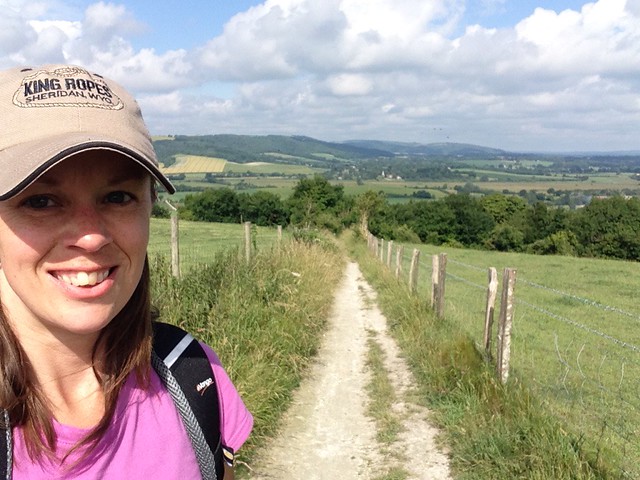 With a 9:30 start I expected to hiked the 6 1/4 miles to Washington in just over two hours, which I did, even including a stop for lunch with a fantastic view over the village below. 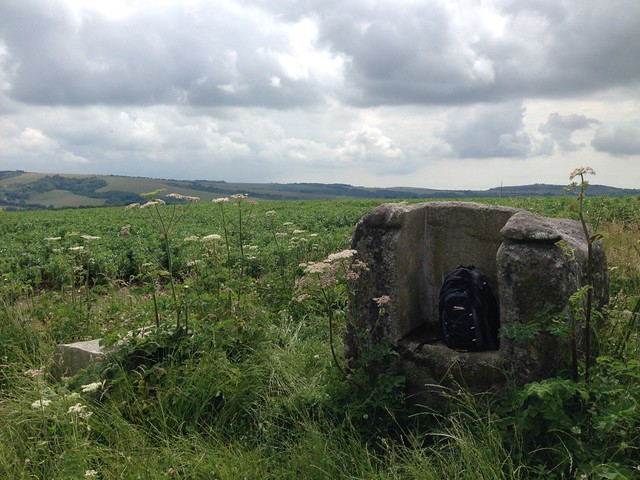 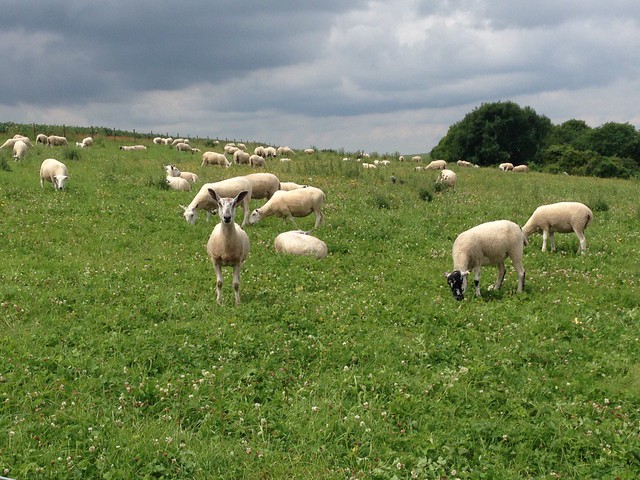 I thought this sign was hilarious…see if you can see what I thought was funny: 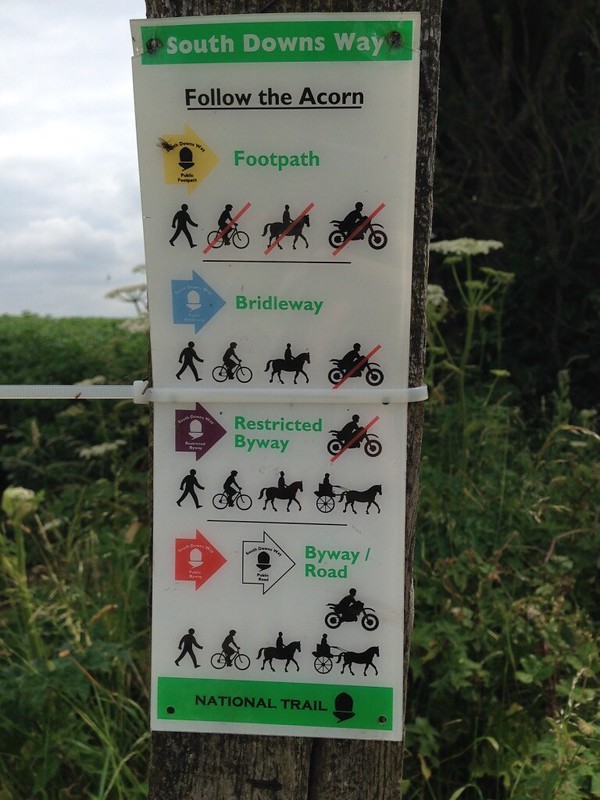 A recommended detour, avoiding the busy A24 dual carriageway, led me into the little hamlet of Washington where a very pleasant pub and beer garden provided a welcome respite and a cold beer while I waited on the bus to take me to Pulborough train station. From Pulborough I took the train to Horsham and walked the mile back to the house, after a brief stop in town to replace my hiking shoes. My current pair had begin to wear due to heel slippage and the resulting hole in the fabric of the shoe was creating a hot spot which would eventually mean a blister.

Friday night I headed to Leatherhead, my old stomping grounds, to meet an old friend for drinks and dinner. The evening was a blast and it felt like no time had passed at all as we reminsced and talked about where we were now and what the future was looking like for each of us. After four hours, four beers and a meal we walked back to the station where we said our farewells and I headed home.

Saturday morning mom and I were heading out the door fairly early (at least for her) and heading to the Isle of Wight, the largest of England’s islands and located off the southern coast, just south of Portsmouth. A ban on overtime by the train drivers’ union meant we were a little concerned about the trains and their reliabilty but we made it to Portsmouth Harbor just in time for the next passenger ferry to the island. A brief wait in the terminal while passengers disembarked the catamaran and a short 20 minute ride across the Solent, the strip of sea between the island and the mainland, put our feet on the Ryde Pier Head. The Solent was extremely busy with the world-famous Round the Island race and it felt like we were dodging hundreds of sail boats. My mom’s partner, Robin, was waiting to meet us at and deliever us back to his flat where we chatted and ate a light lunch as we looked out over the marina from the front window. 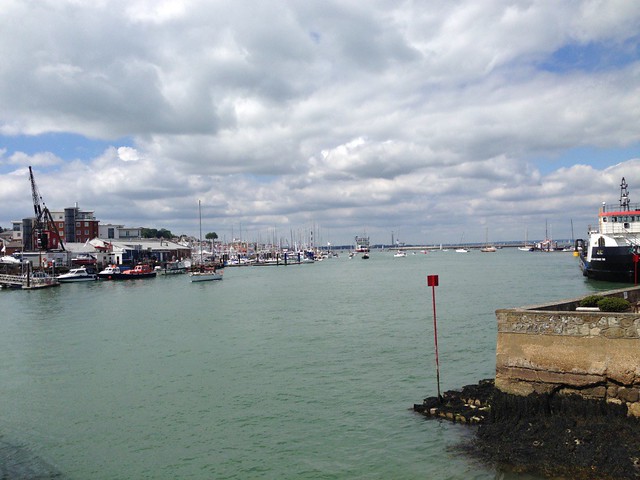 A perusal through a 5 year old island magazine, at Robin’s suggestion, gave me some ideas of what I would like to do, but being 5 years old my first two choices had been closed since the magazine had been printed. With no good options striking my fancy we decided a coastal walk would make for a pleasant afternoon. We crossed the Medina River by way of a floating bridge, from which I sotted a couple of jelly fish in the water, before meandering through downtown Cowes and then beyond, along the sea front. We watched a continuous stream of sail boats coming into the harbor as they completed their circuit of the island and finished the race. 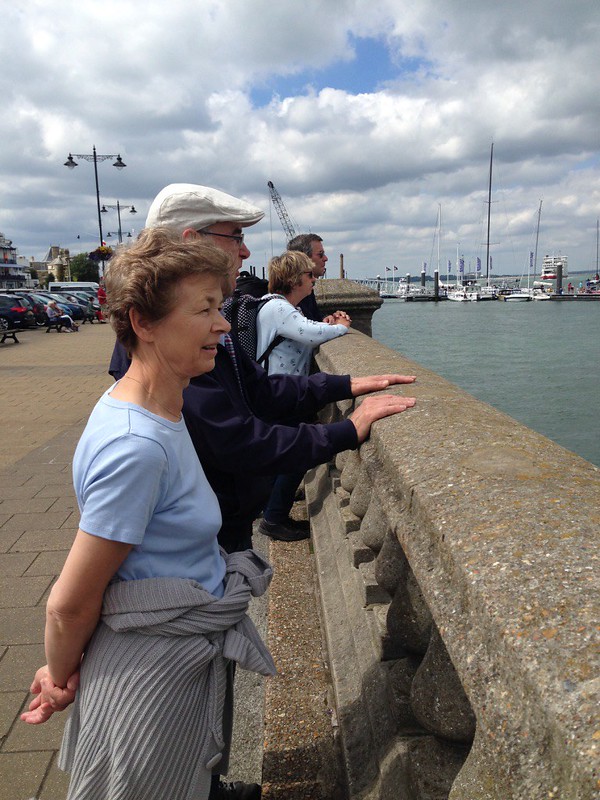 A couple of mies along the sea front we stopped at a cafe in Gurnard for tea or lemonade and typically-British scones and tea cakes. The short break meant our feet and legs were well rested, despite walking on so much pavement, and we headed back to Cowes where we again crossed the river via the floating bridge (actually a chain ferry). Another brief pause at The Lifeboat Pub and Restaurant, overlooking Cowes Marina and dozens of tall-masted sailing boats, completed the walk and supplied us with a cold pint of Guiness’ new lager, a pint of bitter for Robin and some cider for my mom while we watched the milling crowds and sailboat teams enjoy a celebratory or commiserating drink in the hot sun.

We finished the day out with pasta and a refreshing white wine for dinner.

Sunday dawned as a beautiful day with warm temperatures and brilliant blue skies and we took our time getting “up and at-em” for our plans for the day. We were out the door at 11am and heading towards Rosemary’s Vineyard and Winery for a free tour and wine tasting.

During the tour we learned about all the basic procedures used in making and bottling their wines, ciders, liqueurs, and gin and vodka. It was a short tour but was informative especially as it was a small family-run winery and vineyard who took pride in doing things with care and precision by hand for many of the processes. The wine was decent but not the best I have had; their medium dry white was the best of the three I tasted and reminded me of a Pinot Grigio in many ways.

From Rosemary’s Vineyard we headed to the craft village of Arreton for a pub lunch. What we didn’t realize ahead of time was tat there was a classic car rally on the grounds and the pub was insanely busy. After a few minutes of walking through the various artisan stores we headed to a different pub in Newchurch a few miles away where amazing sandwiches and fries were had by all. A scenic drive around the island finished off the day and we headed back to enjoy a dinner of chicken, and another bottle of good wine and great company. 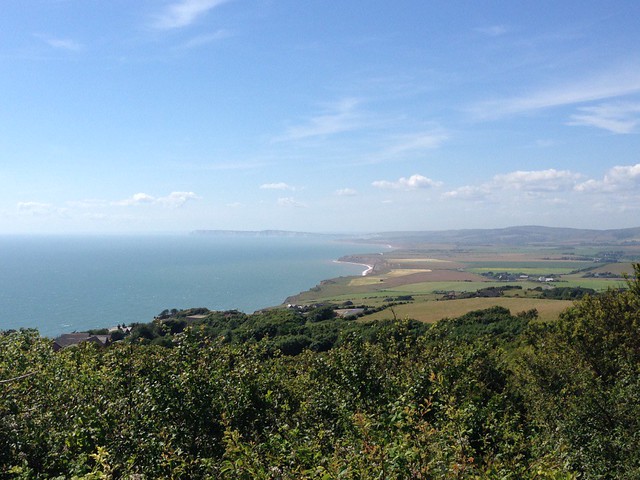 We left early Monday morning for the mainland, retracing our journey from Saturday through Ryde, Portsmouth, Chichester and back to Horsham.