Mom dropped me off at the Burford Bridge Hotel near the Boxhill and Westhumble train station. I walk a short way south, following the Stepping Stones trail to the beginning of the hike. The North Downs Way crosses the River Mole just north of Dorking, Surrey and you can either use the foot bridge at times of high water, or the stepping stones.

From the river crossing the trail climbed steeply upwards towards the summit of Box Hill, the second highest point in Surrey. Steps had been created in the trail to supposedly make climbing easier but I just found them harder to negotiate than managing my own climbing steps, and despite the overcast skies and cool weather I was soon drenched in sweat.

With the first big climb behind me the path stayed moderately level for a while, following a side path around the south side of Box Hill. View points were plentiful and provided stunning views of the countryside and the south downs many miles away. Villages and fields dotted the landscape below with country lanes and an occasional major road joining them together. 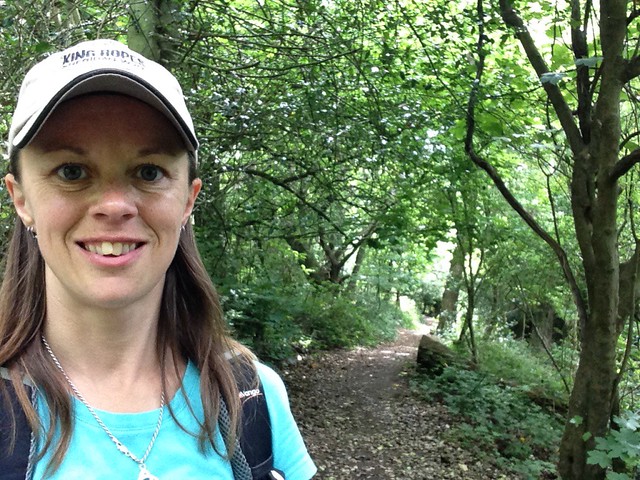 I ran into a few people and their dogs near the beginning of my hike, and other than one very large and noisy group of school kids, there were few others using the trail until I reached the far end. 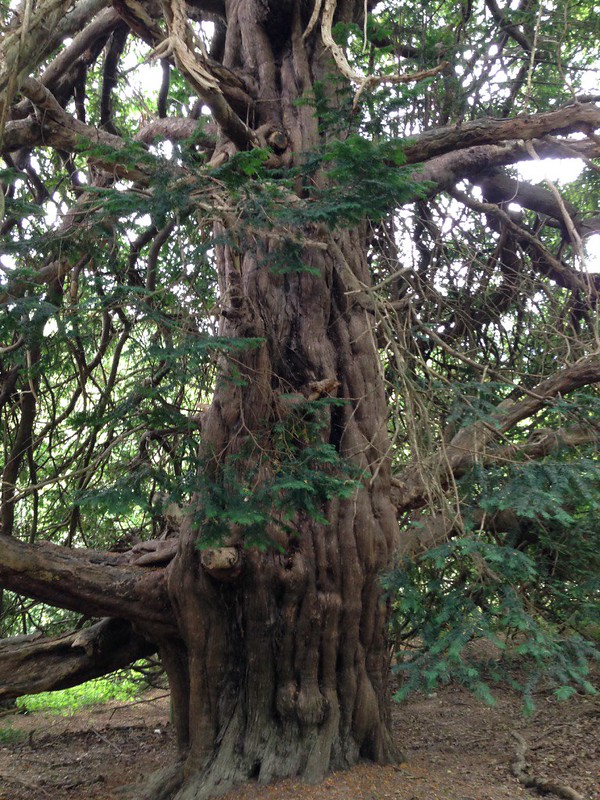 Flowers like lilac, blackberries and wild roses were still out in full force painting the sides of the trail with purples, pinks and delicate white among all the greenery.

Most of the trail was well signposted except for a few spots where it looked like someone had removed the signs, and probably not under the proper authority.

The views continued to impress and I stopped at one particularly enjoyable view for lunch, relaxing for a few minutes until I heard the raucous voices of the school group closing on me. I should have just let them past me earlier as they were obviously gaining on me despite my fast pace. It dawned on me, at the bottom of the last steep but short climb, that they were not faithfully following the North Downs Way and were taking short cuts on bridleways and other public footpaths. They finally caught me at the top of the downs in Gatton Park where I stopped to take a water break. Thankfully they too also decided to stop there and eat lunch. I headed out. 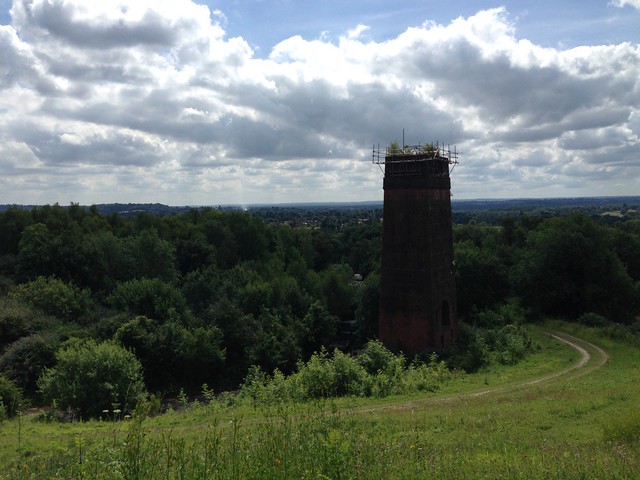 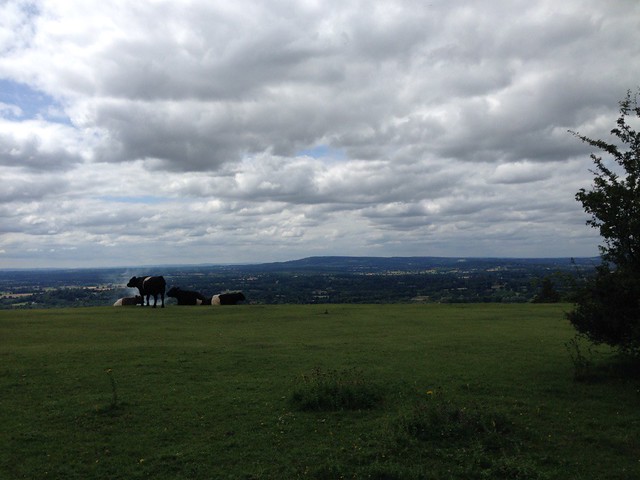 Belted Galloway cattle were grazing at alongside the trail and I passed many other people on foot and on horseback. Many people were out walking or playing with their dogs and I was impressed with the amount of people who had control of the dozens of unleashed dogs that were romping around. I have seen more evidence here in the UK of better trained unleashed dogs than I have in the US. I also saw a very elusive Muntjack deer crossing the path ahead of me but it had disappeared into the undergrowth before I had the chance to pull out my phone and take a picture. 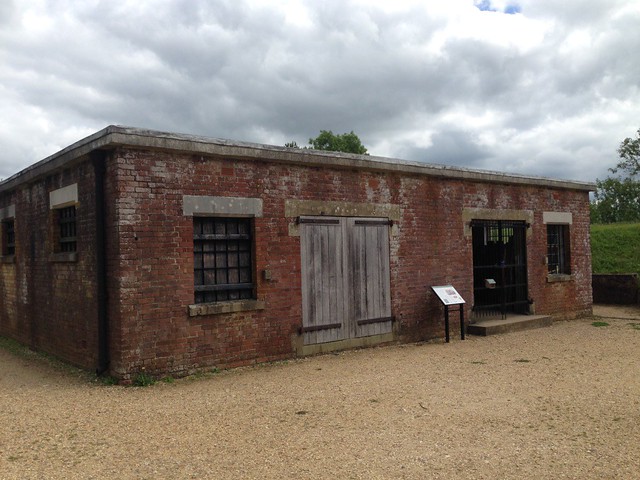 I passed Reigate Fort, an old WW2 fort that had housed troops and ammunition. From the fort the path headed gradually down the hill and through the grounds of a boarding school, a golf club and a small cricket ground before finally finishing at the town of Merstham. A quick stop at the pub for a very expensive beer in the beer garden provided a time killer before the train back to Horsham arrived at the station, two minutes away.

Before I even got out of the car as my mom dropped me off I was already hot. The air was humid and the sun pressed down with a fairly intense heat.

I started the hiking from the visitor center at Denbies Vineyard, just south of where the North Downs Way crosses the A24. It was a more convenient location for my mom to drop me off than the actual road crossing due to the high speed of the carriageway.

The trail started on a paved path through the vines and climbed slowly and easily through the fields. A land train used for tours around the vineyard passed me on its way down and I continued climbing for about a 1/4 mile until I reached the trees and the intersection with the North Downs Way. I appreciated the shade beneath the trees as I continued to follow the ever-climbing paved trail. Views over the valley, the vineyard and the town of Dorking came intermittently and I was pleased with the occasional cloud cover that seemed to appear every time I stepped out into the open. 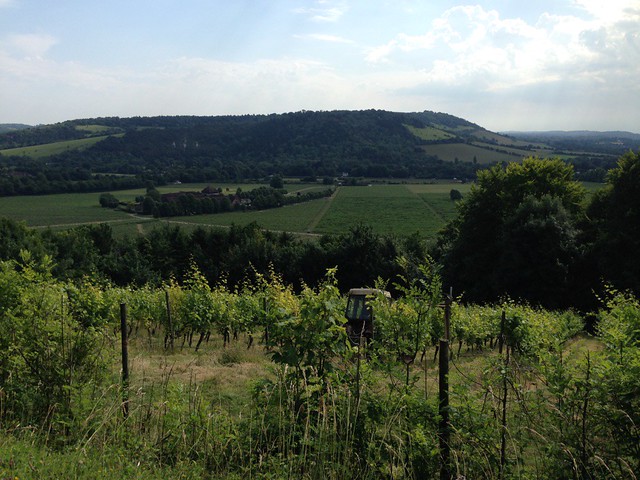 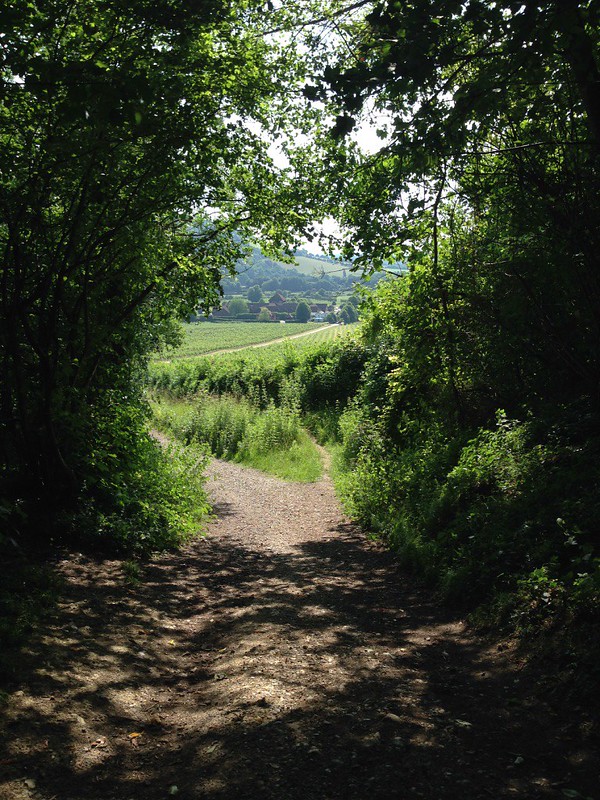 Once done climbing the trail turned onto a dirt path before rejoining a roadway at the top of the hill and through a different section of the Denbies estate. The trail finally left pavement behind as I passed St. Barnabas church and crossed another quiet country lane. I was now surrounded by wildflowers and magnificent yew trees. From this point on the trail remained at a more or less constant elevation which made for some easy hiking and was easy on my knee. 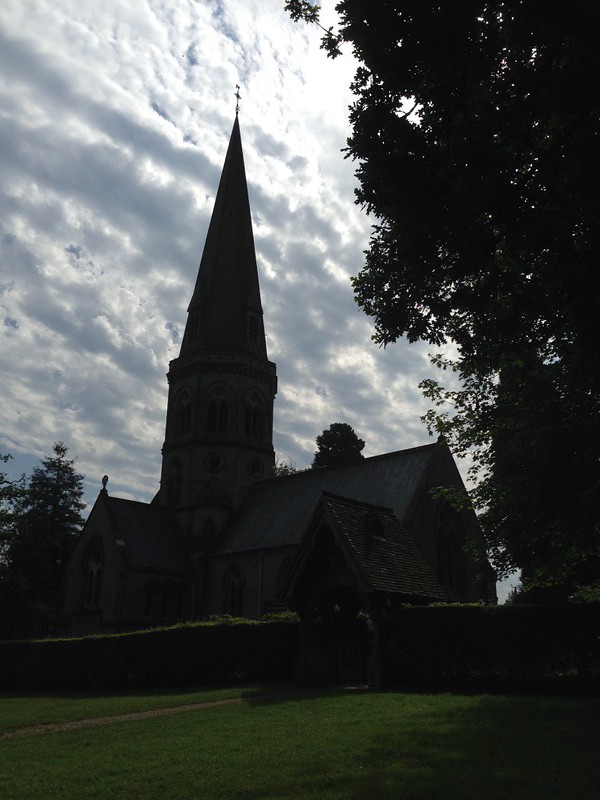 The chalk hills of the downs provide some of the most unique and unusual habitats for various wildflowers, plants, animals and insects that you will find no where else. The kind of chalk soil found in the downs of south-east England can only be found in northern Europe and a small area of Texas with the downs claiming more than half of all there is in the world. It is a beautiful and rare wild habitat that used to be widespread but is now only found in small pockets. Various organizations and volunteers are working on increasing and nurturing these locations. 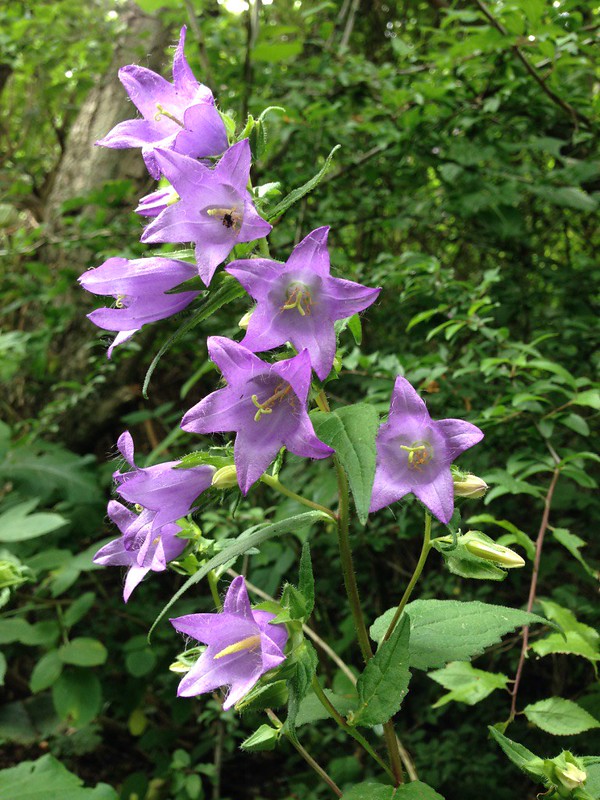 With the exceptions of a few open pockets of land the trail remained under the shade of the broad branches of oak, ash, beech and yew which was much appreciated. I passed the occasional walker or runner out with their dogs, including one lady who was wearing a skirt and dress shoes, and looking a little out of place. 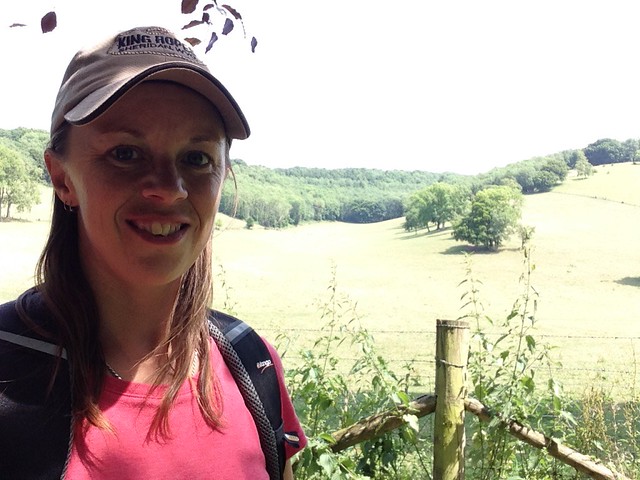 The second half of the trail had me passing an assortment of brick bunkers called pillboxes. These small shelters were built along the south side of the downs as a home defense against a possible German invasion and were mostly hexagonal in shape with blast protection on the roof and small gun ports on three or more sides. They were manned by the home guard but provided no living accommodations for the men who were in service. 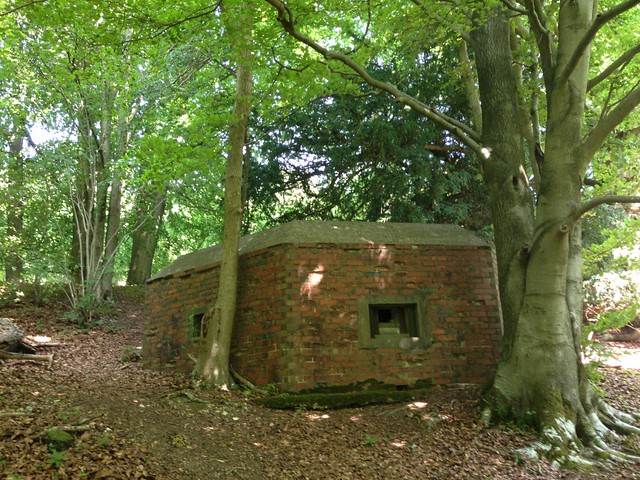 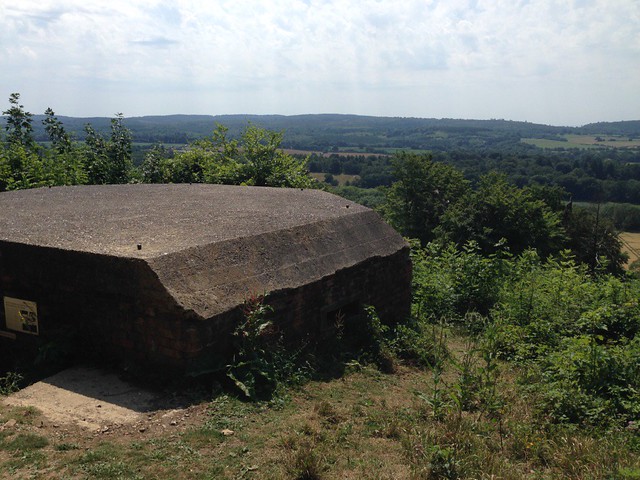 More wildflowers and extensive views of the south downs continued for the remaining miles until a left turn took me down the hill to my destination, the tiny village of Gomshall. Unfortunately it was this last downhill that had me in pain again and me knee was protesting violently. I was glad to rest my knee at the beautiful riverside pub, The Compass, as I waited in the beer garden for the next train that was still an hour out. 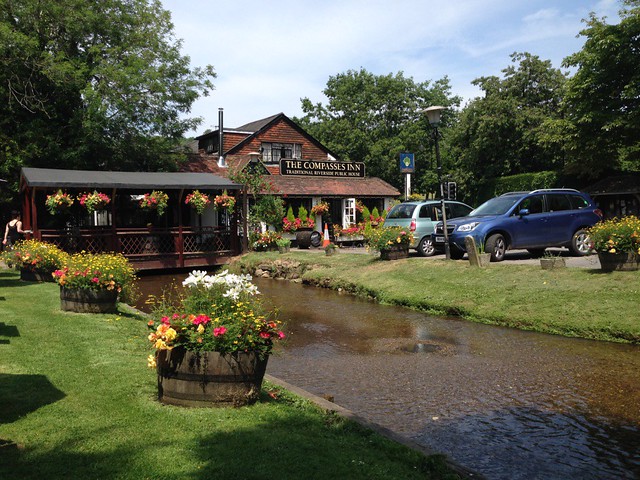 I stopped in at the minor injuries unit at the hospital on my way home to have them do a quick check of my knee as a precaution. Thankfully there was nothing major but I am sadly out of commission for hiking for a month or so as I let it rest and heal.

The rest of my week, and thus the last few days of my time in England, were spent with family and old family friends. On Friday we took a drive to Hollingborne in Kent, just east of Maidstone, to meet an old friend of the family, his wife and her daughter. We met for lunch at a quaint little 13th century pub called The Dirty Habit. The food was good albeit slightly unusual for a pub and the service was excellent.

From a great lunchtime meet-up we headed west to Yalding, on the other side of Maidstone, to spend the afternoon with my nan. We enjoyed a few hours in the garden before having a light tea of hot buttered crumpets and heading home.

Saturday was grocery day (exciting, right!) and then we headed to the local garden and falconry center where we spent an hour looking at and interacting with all the beautiful falcons, owls, hawks and eagles before a two hour flying demonstration of several of the birds. 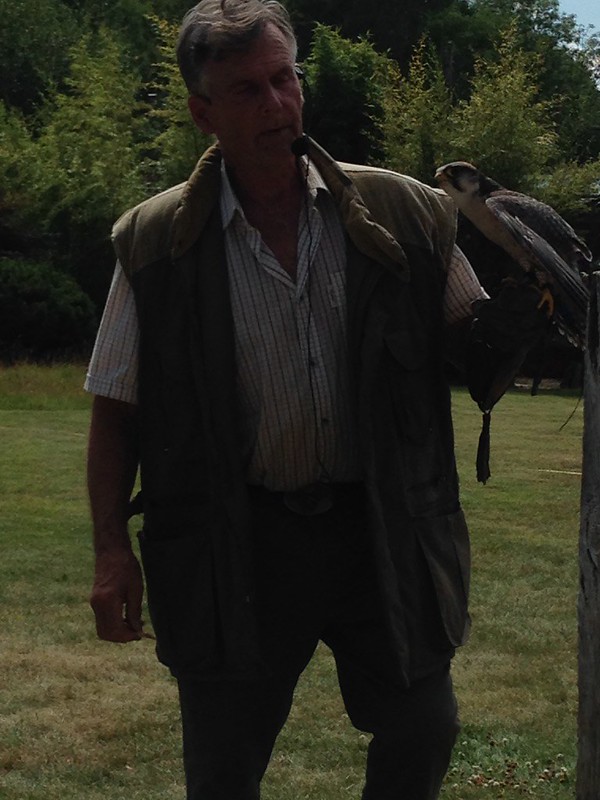 They started with two gorgeous Harris Hawks which are not native to Britain (they are an American bird) followed by a peregrine falcon/lanneret hybrid who took a long excursion away from the center. The falconers were worried and explained that it was normal to let them get out and fly. While we waited they brought out and flew a stunning and large eagle owl, which required a couple of volunteers from the audience…of course I jumped at the chance. He was a spectacular bird and it was quite an awesome opportunity…sadly my mom forgot to take photos so there are none of me and the owl together…at least I took a picture of him in his enclosure: 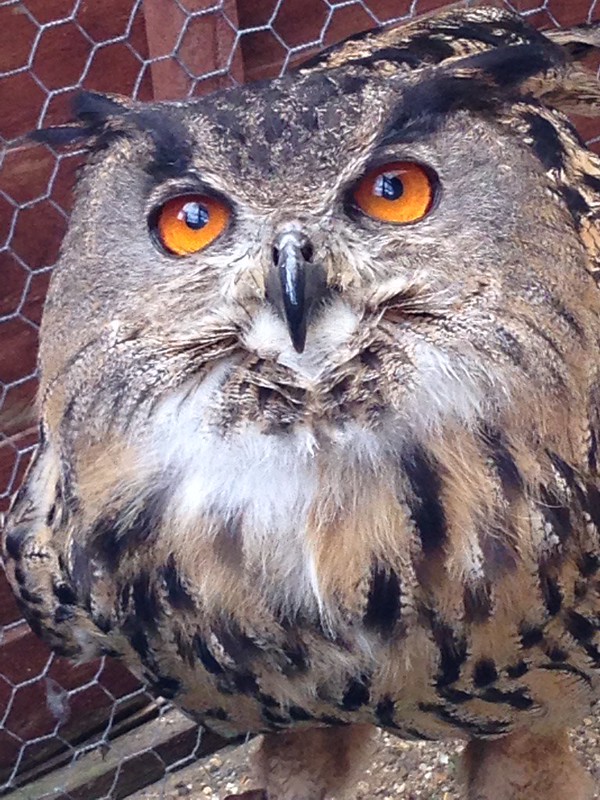 Toward the end of the owl flying the falcon returned and it was incredible to see him dive at high speed to take down the lure. 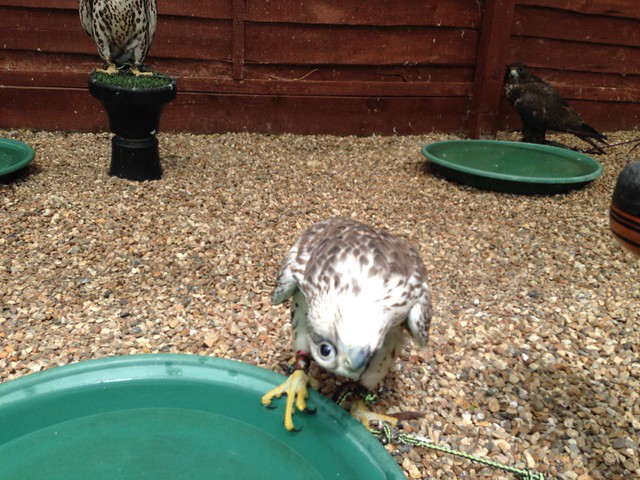 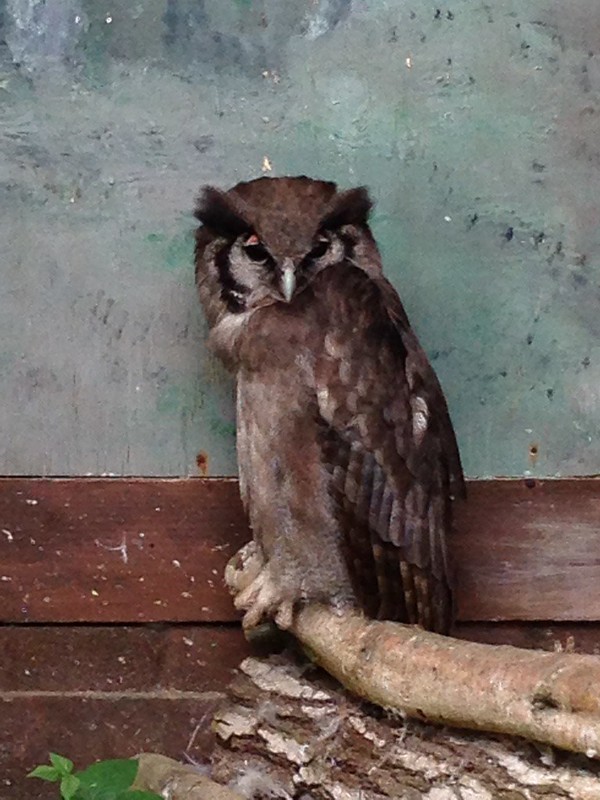 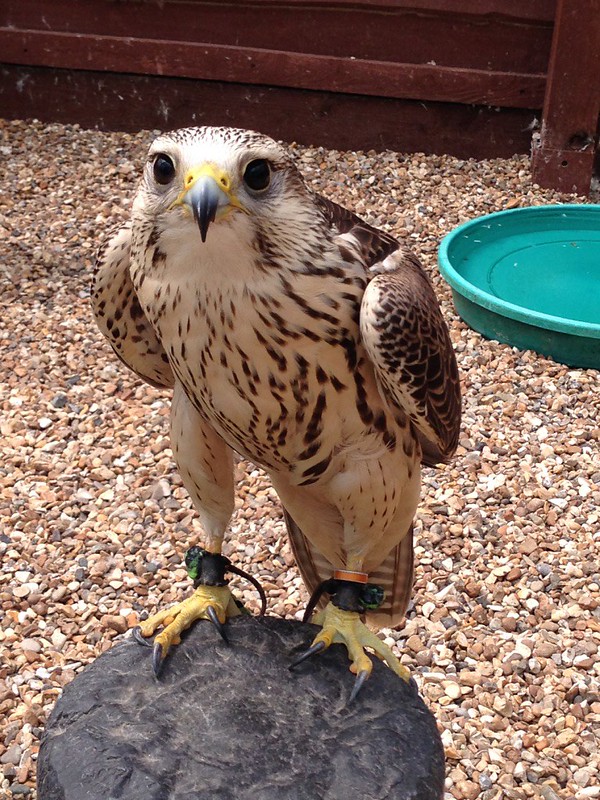 They flew a few more birds, including a kestrel, before calling it a day at 4:30. A 2 hour show for $6 plus a handling experience was a steal for a well-spent afternoon. We wandered through the camping store that was also on site, a place my mom had never been, and meandered through the maze of large “glamping” and basecamp-style tents…so many to look at and so many styles. Exhausted and hot we grabbed a quick cold drink and headed home for a light dinner.

Sunday started out a little gloomy but eventually warmed up and I did the last couple of loads of my laundry before packing my suitcase. My sister and her boyfriend arrived for lunch (a proper roast beef and potatoes English-style roast lunch) which we spent an hour or more enjoying before we headed to a quaint little pub in Barnes Green that my mom recommended. The afternoon was warm and pleasant and the conversation was fun and jovial. We headed home for tea, dipping chocolate and strawberries and a light-but-competitive game of Scrabble. Sadly I had to now say my last goodbye to my sister as I would not be seeing her again before my Tuesday departure. 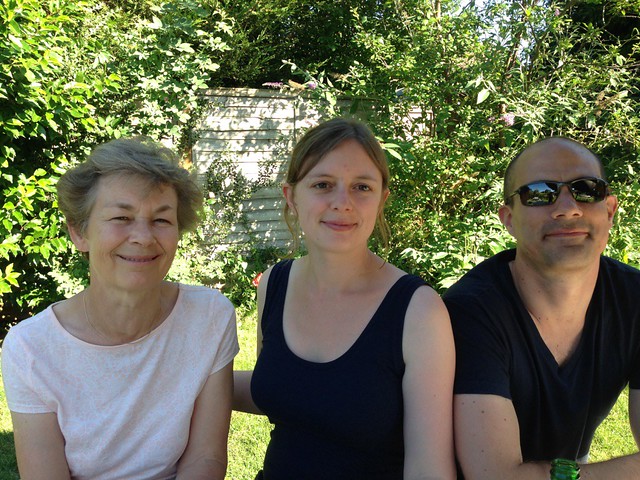 Monday was a relaxed day as mom did some garden work before we walked into town. I took her to lunch at The Giggling Squid, an excellent Thai tapas restaurant on the east end of the pedestrian high street, as a thank you for everything over the past five weeks.

Tuesday came all too quickly as I loaded the suitcases into the car and we headed for Heathrow airport. With a little time to spare after checking bags and getting my boarding pass we grabbed a quick bite to eat and then it was time to say good bye as I headed for security. As always it was an emotional parting from my mom but I was ready to head home, back to my dogs, and spend a few weeks with my dad and step-mom before they returned to England for the final time.