For so long, especially when the world had been hanging heavy on my shoulders, I have wanted to hook up the fifth-wheel to my truck and get on the road. I have spent three years ready to do something different after my ranch partner passed away in 2014, and two years getting my truck and trailer ready for full-time living. I saved money and spent money on upgrades. I made friends and I lost friends and I ended up in court, twice, and that is a story best left off the internet but I’ll leave you with the knowledge that I was not on the losing side either time.

August 2nd was my move-out/move-in date. The camper was finally ready with solar, fully-functioning plumbing, a sealed roof and seams, new tires, heavier rims and axles than she had come with and an interior redesign that would rival even Ragnar Lothbrock’s long-house. I was so ready, but I was also sad too. I had spent 6 years in an amazing house that would soon be in the hands of others to take care of…I had a lot of good memories with my parents in that house and it was a little heart-wrenching to walk, or drive, away.

However, I was only moving about 300 yards down the road to a friend’s property. Her and her family had recently purchase another property and were no longer on the premises so it was perfect for me to work out the last kinks I could find while living in the trailer and still finish up with some final commitments in the area. Very little happened during my time on the vacant property and I was fairly bored most of the time while my feet itched to get on the road…and finally we did.

I left Story on September 2nd, a month after I had moved into the fifth wheel, and headed for Casper where I was due to drop it off at Stalkups RV for a repair on a jack that wasn’t fully retracting. I also discovered during my trip down that the brakes were still not functioning right and also asked them to check out what the issue was during the week they would have her. I would be in the Wind River Range backpacking for a week with a group of four people I had never met (see previous blog post here) and would be out of contact for a week.

With the backpacking trip over I returned to Sheridan to pick-up mail, wait on a check and a couple of packages to arrive and to have a beer or two with a few friends before I left. I talked to Stalkups RV about the issues with my camper: the jack was a simple fix thankfully and didn’t require a replacement. However the brake issues were a little more serious with pads falling apart, incomplete wiring, bad magnets etc) and I authorized them to complete the work so that I would have a road-safe RV finally…it would be good to have brakes that actually worked!

Again, despite only being back for two days, they dragged by slowly and I was ready to leave again. It wasn’t until I was completely loaded, with the food in the coolers, my packages unboxed and put away and the dogs in the back of the truck that I really felt truly sad about leaving…this really was it and there was no coming back for a while.

Once I was on the road and heading towards Casper, some good country music on the stereo, my melancholy mood quickly left and I was bopping down the interstate towards my home on wheels. It was a good site to see as I pulled into the lot and quickly unloaded some of the gear that had been cluttering up my truck. I went to pay for the work and was shown exactly what the brakes had looked like…certainly not a pretty sight.

I spent the night in the RV service lot so I could visit a friend early in the morning and then head out with plenty of hours to spare in the day. Another sad farewell was made with Megan, a former room-mate from Sheridan and now good friend…we had shared several fun days at renaissance faires together.

With nothing left to do I hooked up the trailer, made my final checks (including brakes) and drove out of Casper towards Muddy Gap.  On the way I passed Independence Rock but with no warning signs and the only sign being 20 yards from the turn-off I didn’t have the time or distance available to stop and so I just got to enjoy it from the road. A little further on I did have enough warning to be able to stop for Devil’s Gate a couple of miles to the west, info for which can be found here and is part of the old Oregon Trail. There is also an old settlement on the west side of the gate which use to be a ranch and homestead but was sold to the LDS church in 1997 and is now the Mormon Handcart Historical Center. 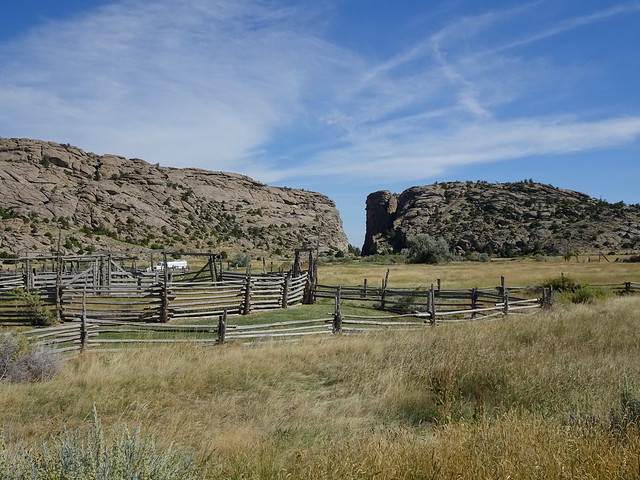 The weather was perfect for a first day out on the road with my home on my back and we made good time over the pass and into Rawlins. I didn’t want to travel too far on my first day and used one of the free apps on my phone to locate a good boondocking spot for the night. The closest one I could find was Teton Reservoir south of town and I followed the directions. 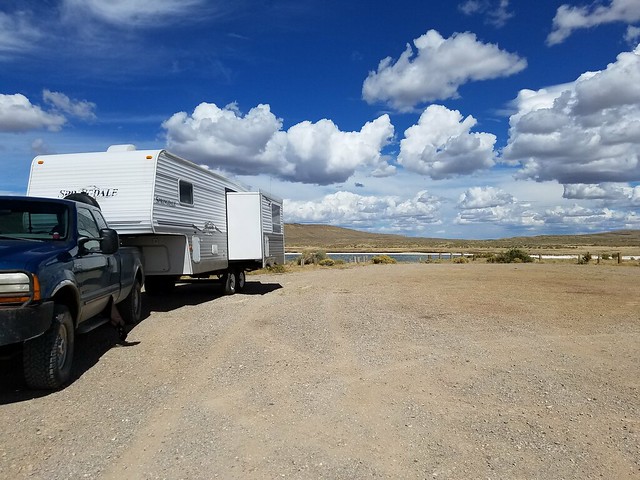 I never made it that far as a sign for Rim Lake Recreation Area caught my eye a few miles along the road and I pulled off, driving the mile-long dirt road to something more akin to a cattle pond than a lake…but it was quiet, easy to get to, had clean toilets and was flat. I didn’t see any “No Overnight Parking” signs but nor were there any purpose-built campsites either. I pulled into the unused (unusable too) boat ramp area and called it good for the night. Plenty of hours of daylight left gave me a good chance to get more organized and finally put away all of my camping gear and de-clutter the camper while enjoying a glass of wine and texting friends. Cell phone service was limited to non-existent but I’m not on the road to be constantly connected to the outside world. I did watch a movie and was a little shocked to see how much power the TV and PS3 pulled from my four batteries. 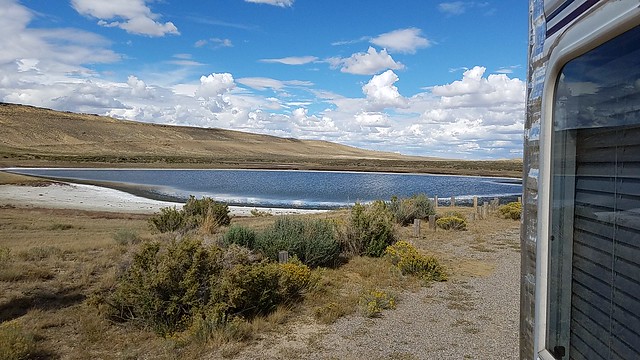 I was up early after a restless night listening to the incessant rain and wind on and around the camper. It was certainly a gloomy and wet morning. I used the recreation area facilities and let the dogs run in the rain for a while before I loaded them up into the truck, unplugged the extension cord from the inverter and left Rim Lake.

We pulled back on the highway, got diesel in Rawlins from a rinky-dink Sinclair station that was 20 cents cheaper than the larger truck-stop Sinclair station three blocks away…it was worth maneuvering into for that price difference. I’m glad my rig isn’t larger than it is.

From Rawlins we drove through intense rain and wind, almost feeling like we were blind as truck after truck passed us and kicked up spray that was more like a wall of water than airborne droplets. It was a slow journey but finally it cleared up and we could pick up a little speed. Of course the wind picked up speed and it was a constant fight to maintain a straight line, not to mention I could see the sway of the back of the trailer behind me.

We exited at Green River and filled up, again. I try to keep my truck’s tank above half full so I never have to worry about running out of fuel and it is also less painful to look at the pump when paying for it…psychological, I know, but still the way I do it. 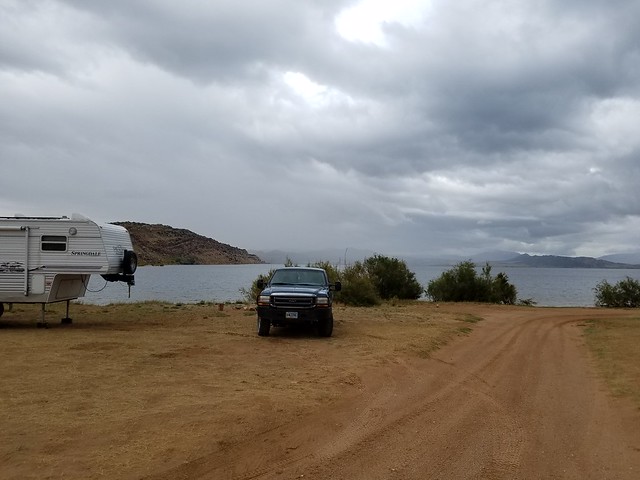 A camp ground in Flaming Gorge was our destination for the night and the drive in was beautiful. The campground itself was empty except for a lone Class A and I asked if there were campground hosts to pay…nope, they just come around and ask for money. It was $12 for the night and the view was pretty amazing; I had picked a nice secluded spot right along the edge of the lake and I spent some time uploading previous blogs and pictures since I had a couple of bars of 4G service. 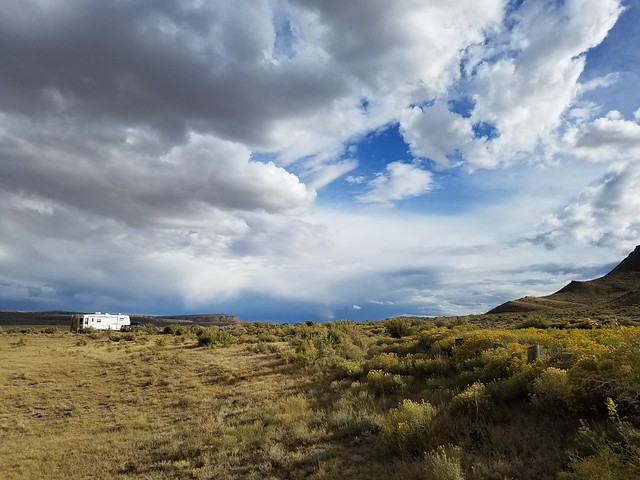 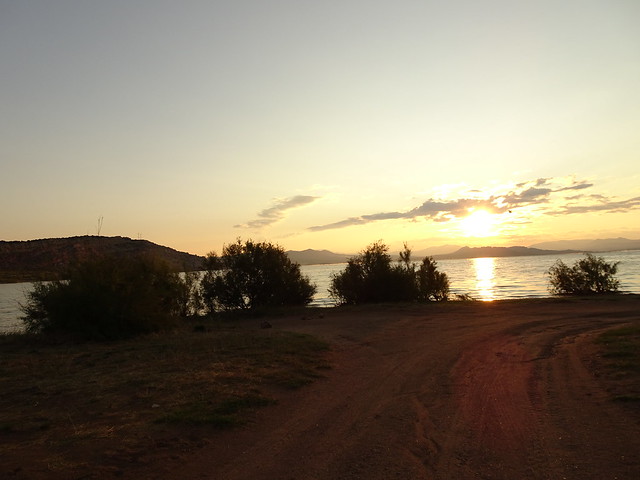 With the sun going down I decided to explore the local area and headed into Manila for the evening…a two bit town whose only bar seemed to be on the Wyoming side of the state line…go figure that one out!!! I enjoyed a cold beer and then got involved in a couple of games of pool with some locals and some guys up from Salt Lake City who were in the area to hunt bear. A fun evening, and meeting new people is half of what being on the road is all about for me. I called it quits at 9pm and headed home with some damp dogs (it had apparently rained a little while I was inside) and went to bed. 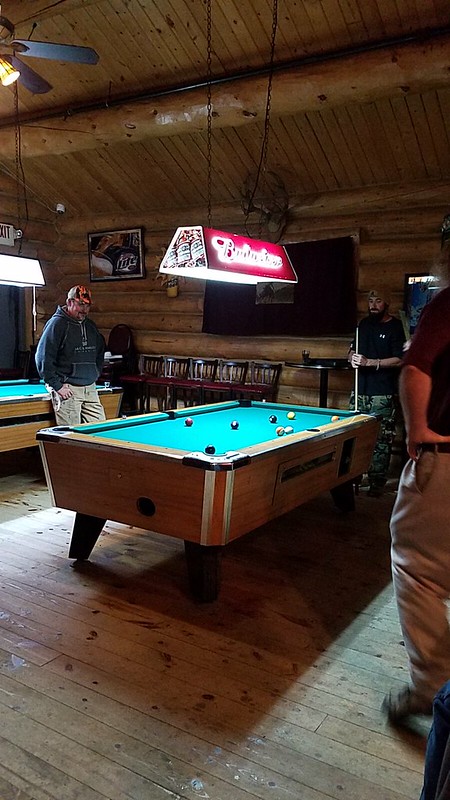 So far, a good first couple of days on the road albeit very little to share.