Everything was pretty wet this morning leaving Flaming Gorge National Recreation Area, including the sandy soil…thankfully this made for an easy hook-up and pull-out at 8am.

From the campground we headed south, crossed the Utah state lane and followed highway 530 south towards Vernal. Initially the road was moderate but it quickly got steep as it climbed into the Uintah Mountains. There were no easy grades here. A steep decline into Sheep Creek Canyon was stunning but hairy (another thanks for finally having good brakes) and I passed a handful of Big Horn sheep on the side of the road. Sadly, due to the road and the lack of pull-offs I was unable to get a picture. I did try to capture some of the scenery when safe driving permitted. 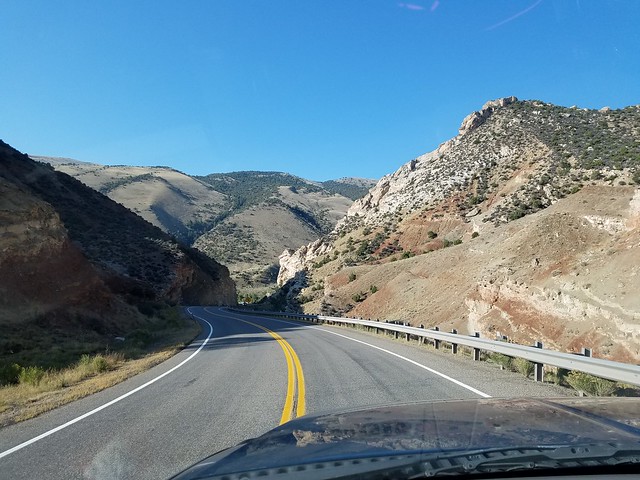 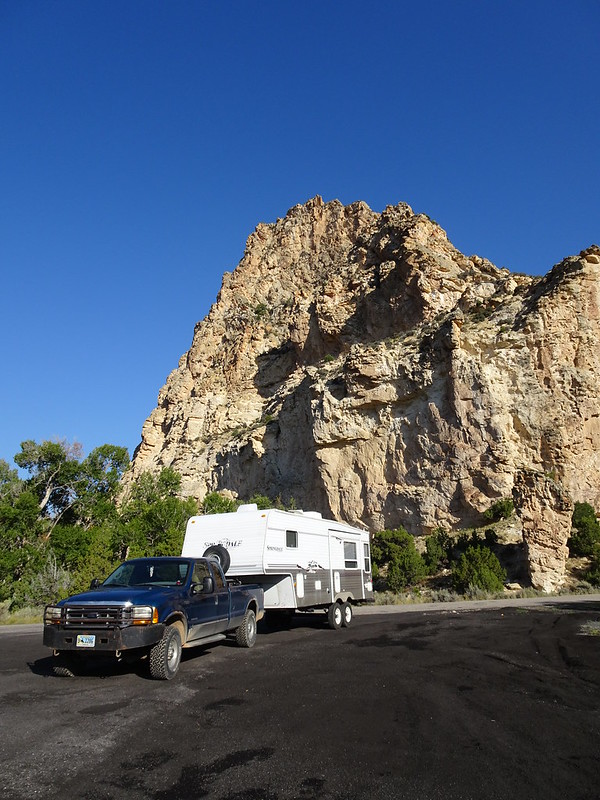 None of the highway to Vernal was easy and I rarely got above 4th gear, often being in either 2nd or 3rd due to the incline or decline. However it was very suitable for hauling and the views were spectacular and I enjoyed the drive. Hwy 530 finally joined 191 and we made more steep descents and climbs as we made our way to Vernal. 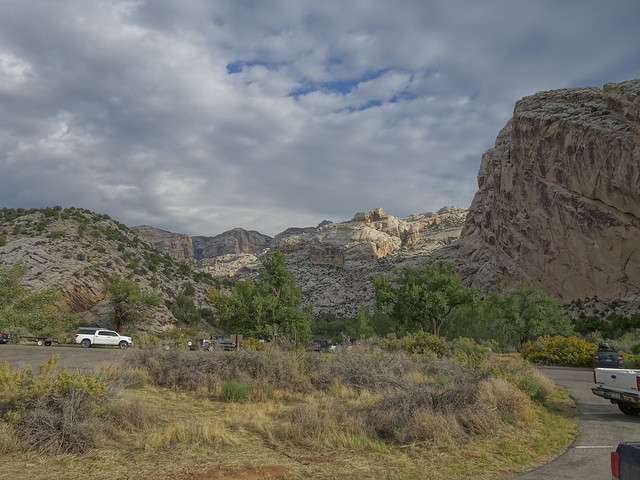 Coming into Vernal was simple and well sign-posted and we turned right onto Hwy 40 towards Salt Lake City as we kept an eye out for a Walmart. I didn’t need to pick up anything but they are almost always guaranteed to have RV friendly parking lots in which to look at maps, phones and GPS devices. 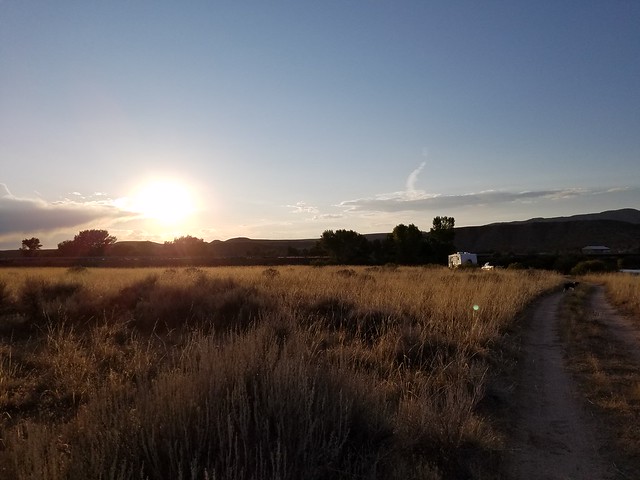 I oriented myself in the town, ran into Walmart for the bathroom and headed back out…turning west on Hwy 40, back the way we had come, before turning south on state or county highway 45 towards the Green River and BLM land where we found an empty dispersed camping campground. We set up quickly, relaxed for a while and then headed back into town to explore. 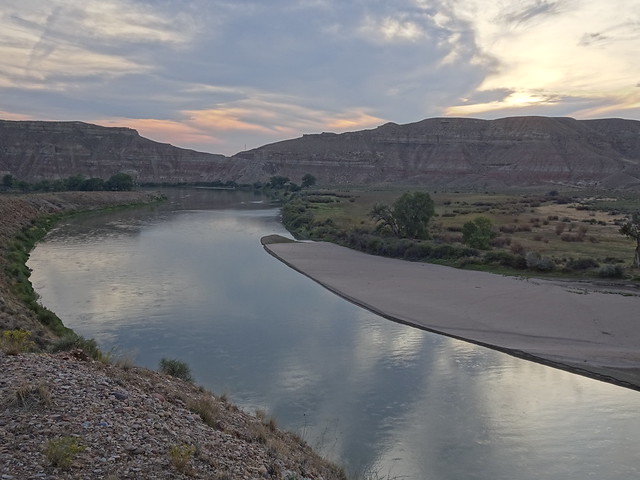 Our first stop was the museum in town to learn about the geographical and geological history of the area. The Uintah Field Museum of Natural History is combined with the visitor center and is a good place to start off any visit to Vernal and the surrounding area.

The Uintah Basin was originally a massive lake that eventually evaporated over time leaving layer upon layer of sediment that entombed the history of the area for us to find millions of years later and helped us to understand what happened here and how. 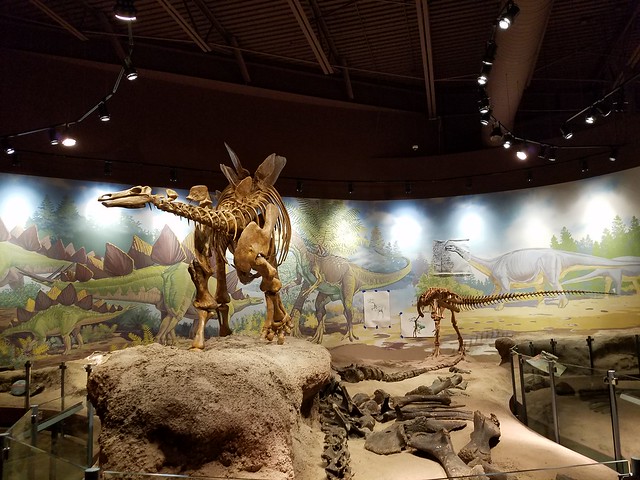 The museum provided multiple brochures that were each listed as a day hike/activity in the area. There were 12 to choose from and I picked the couple that I had been recommended; Dinosaur National Park and Fantasy Canyon. From the museum I crossed the street to the Vernal Brewery, a recommended place to try a local brew before heading back to the camper for the night. 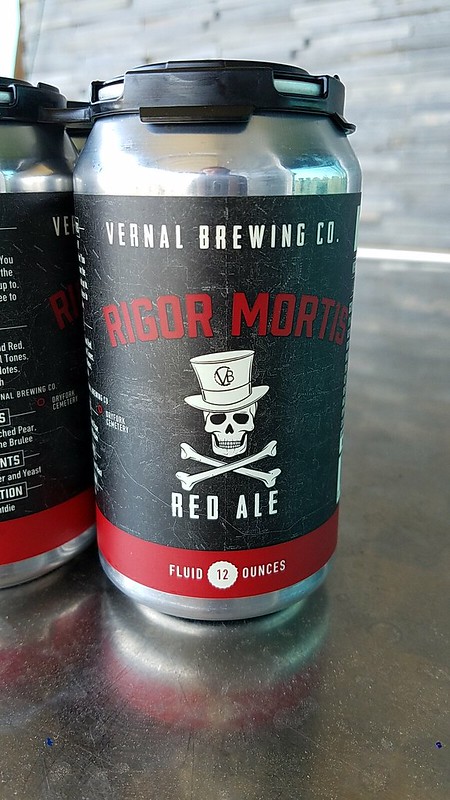 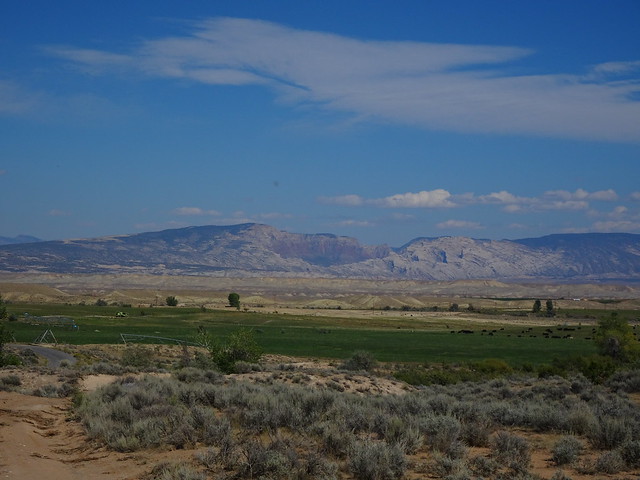 The dogs and I were up early to head to Dinosaur National Monument where we finally got our annual pass (they had been out of them in Grand Teton NP when we were there a few weeks ago). We briefly stopped at the visitor center where we were told we could drive up to the quarry as the shuttles weren’t starting until 9:15am. Being an early bird has its perks. 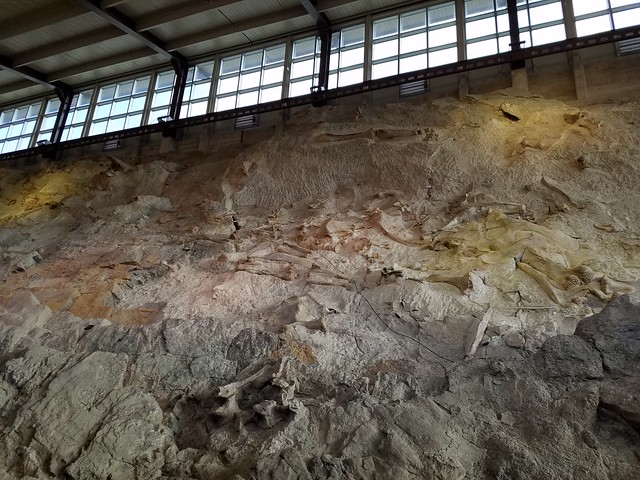 The visible quarry is housed in another massive building to protect it from the elements but in the rock wall it is possible to see hundreds if not thousands of bones. The reason for the huge amount of dinosaur bones in the area was due to a lengthy drought during which many hundreds of dinosaurs perished on the banks of the dry river. When the rains came again and the river rushed back through it carried the bones and bodies into the Uintah Basin and the surrounding area. Sadly the Fossil Trail was closed for maintenance (the bane of coming in the shoulder season) so we headed down the road and turned left, further into the park.

The Tilted Rocks Scenic Drive is the main road through the park and it is obvious to see why it gets its name, even more so from a distance outside the park. The geological formations of vertical and split rocks, enhanced by the gentle flow of the Green River, made for a stunning drive and I found the beauty more intriguing and interesting than the bones of old dinosaurs…of course their history is intertwined but there is something about the upheaval of the earth and the erosion by wind and rain that inspires me. 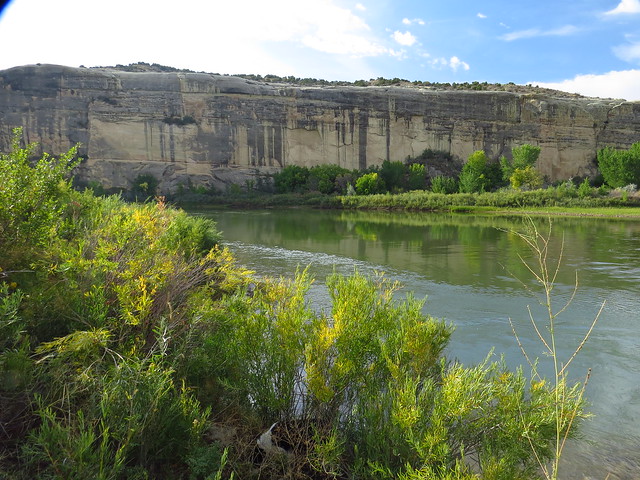 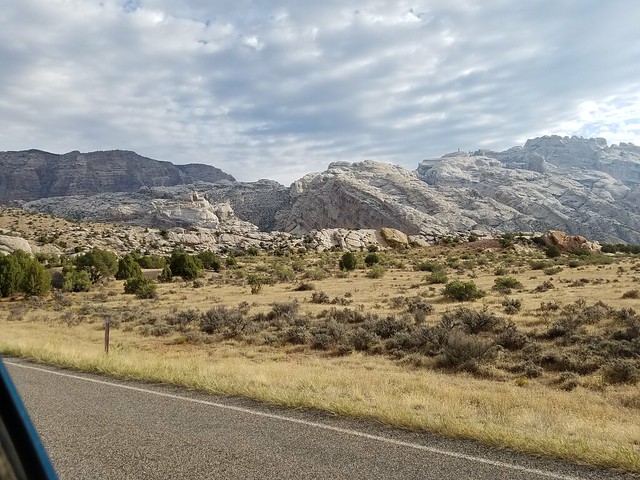 The end of the paved road crossed a cattle guard and turned to dirt as we drove towards Box Canyon and a small homestead long abandoned. A short hike into the box canyon was stunning and I felt particularly small as the walls towered above and dwarfed me. Rain came quickly as it had been threatening all morning and I stashed the camera quickly and made for the truck. Sadly the Hog Canyon trail as also closed so we got turned around and headed out of the park. 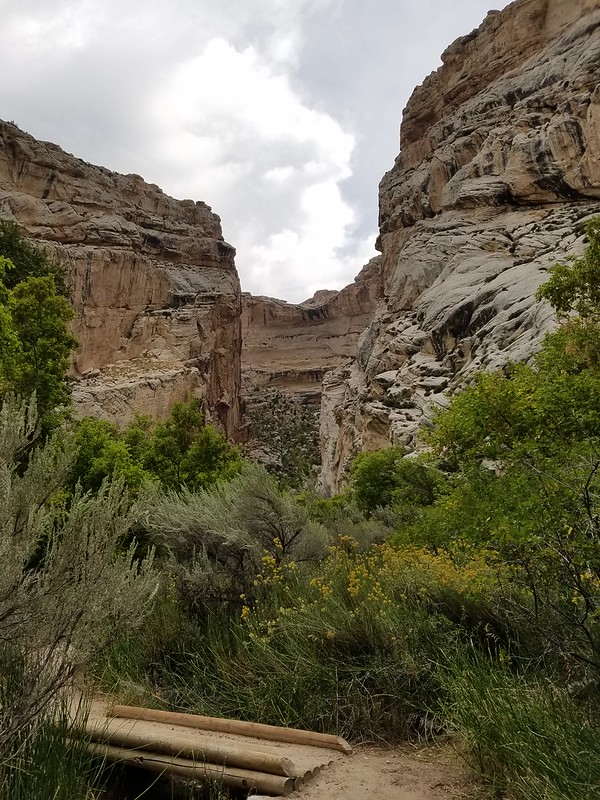 A glance at the clock confirmed it was barely 11 am and I wasn’t ready to be done for the day yet. I am out on the road to do and see things, not sit in my camper and watch TV.

We headed for Fantasy Canyon, a remote canyon 40 miles south of Vernal on mostly-paved roads. After leaving the Green River/Red Wash Highway the views were not inspiring with all the pumps, wells, pump jacks and other industrial equipment. Fantasy Canyon is located in an area surrounded by all this ugliness but is worth the drive. 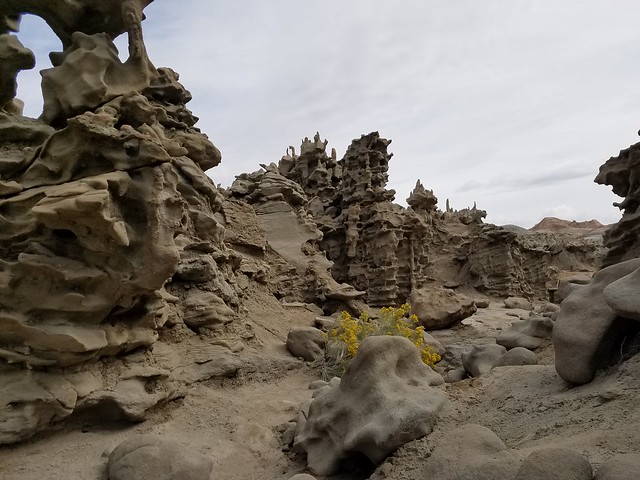 The canyon itself is incredibly delicate and you can see where nature has already felled some of the spires and creations. It felt like I was in Mordor or some other fantasy realm where Orcs or other evil creatures lurk…I half expected to walk out into Middle Earth. Sadly that didn’t happen. The canyon is only a little over 10 acres in size but the formations are pretty incredible to walk between and around…just be careful of Prairie Rattlesnakes…they even warn you on the bathroom doors! 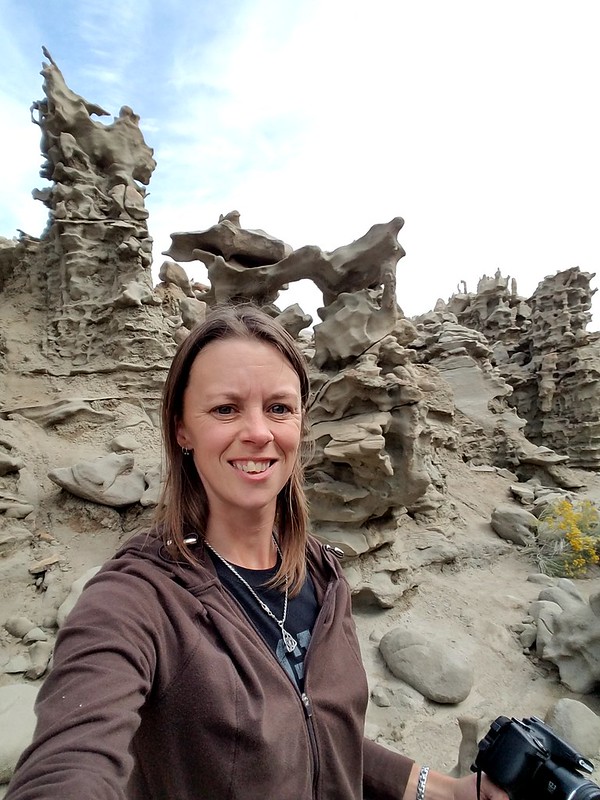 With Fantasy Canyon toured we called it a day and drove the long way back to the camper, almost getting lost in the process (thanks Google Maps for not being obvious). 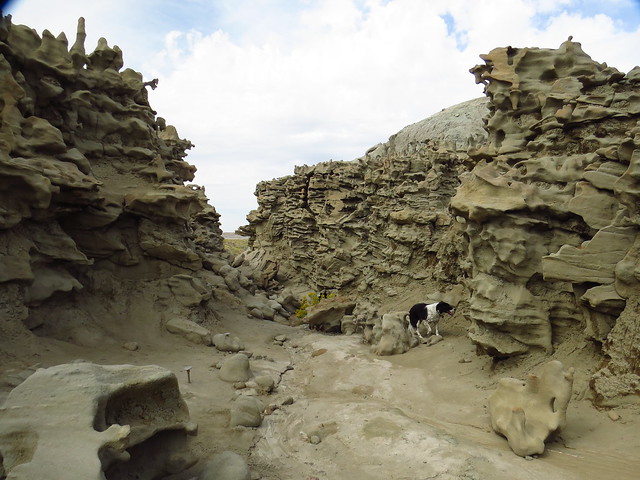 Drove to Horseshoe Bend (not to be confused with the one in Arizona) for the sunset: 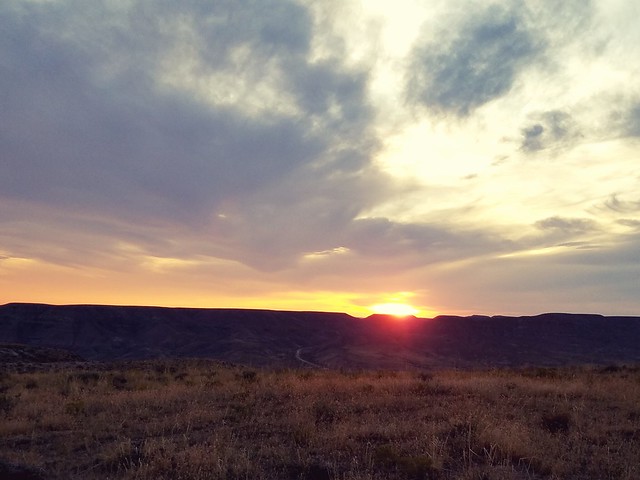 Our last day in Vernal saw us heading to check out Moonshine Arch, a little known arch and tourist “attraction” north of Vernal. The brochure gave good directions and I still missed the almost-invisible turn-off and had to turn around. The dirt road is easily navigable and the way fairly well signed with rust-colored or green signs pointing the way. A gate and fence line was where we parked due to a massive washed-out gully in the way but it is possible to drive up further with the right vehicle, and even to the bottom of the arch with and ATV. I chose not to beat the hell out of my truck. 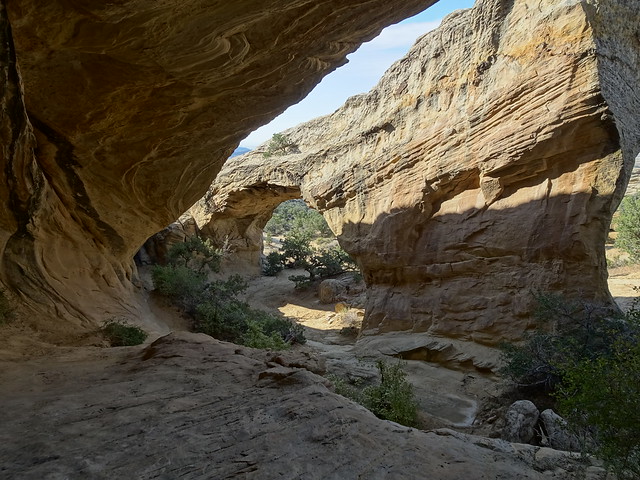 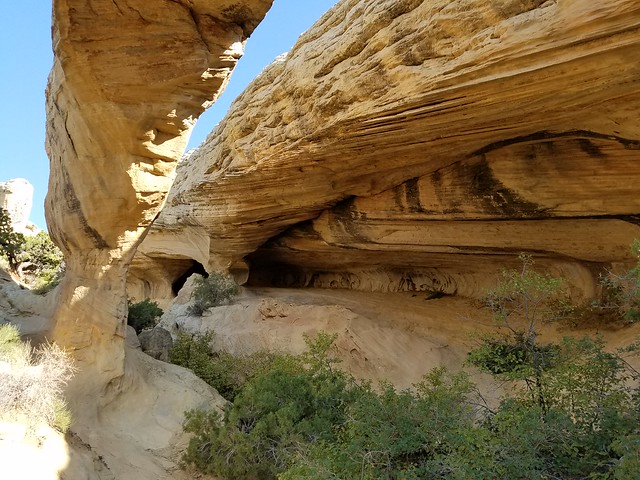 A short mile-long, well-marked, up-hill hike brought us directly to the base of Moonshine Arch and the shadowy caverns behind it. You don’t actually see the arch until you come around the last corner and are right beneath it. It would really be a sight to see water rushing through the channels and washes of the canyon and caverns but of course that would also make the trail dangerous and difficult to navigate like many of the trails in the area. 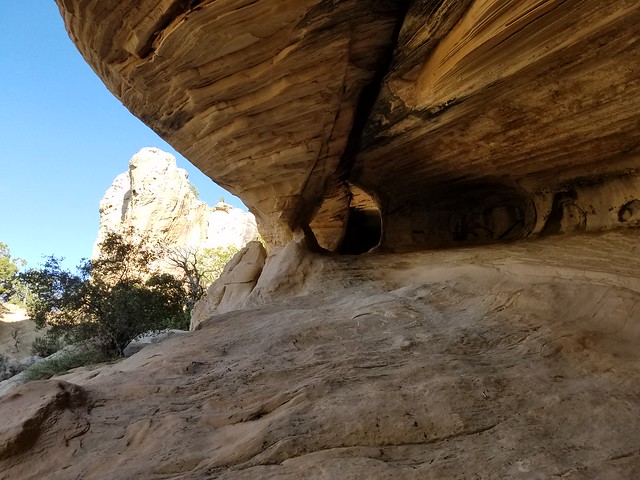 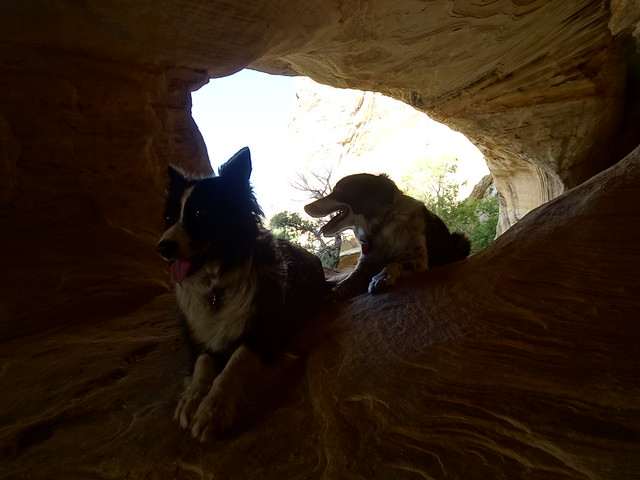 We spent a few minutes exploring and climbing on the rocks and into the caverns around the arch before starting to head back to the truck, and then realizing half way down that I had left my jacket hanging in a tree. I hiked back up, retrieved my jacket and started back down…again.

I gave the dogs some water and headed back into town for lunch. I had been recommended a restaurant called Swain Bros Steak House. It was on the east end of town and I ordered the California Burger with sweet potato fries…it was definitely as good as the recommendation. 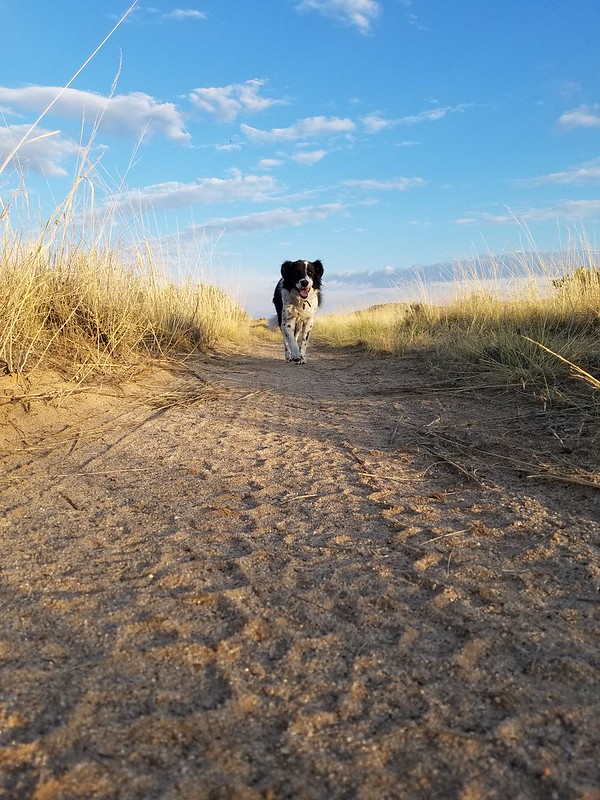 Our last activity in Vernal was a short drive up Dry Fork Canyon and a quick stop below the memorial for Remember the Maine, a battleship destroyed in 1899 during one of the many wars in America’s history. 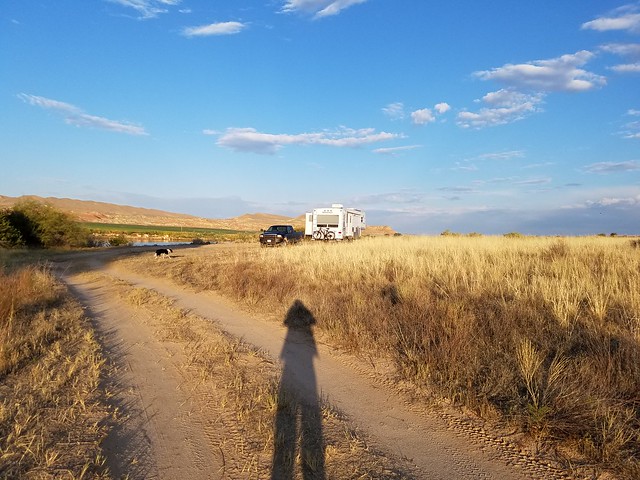 Back at the camper I re-heated some food, organized everything for an early departure, played with the dogs and went to bed.