Apologies for the delay in getting the blog updated. I have been dealing with a broken right hand from an accident at my current job and I am right-handed. I am at the tail end of healing and should be getting more posts out in the near future.

(As with the zip line tour I booked a half day canyoneering excursion on Friday directly with the tour company. There are a handful of places in Moab that can book multiple adventures (biking, hiking, horseback riding, canyoneering etc) all from the same place, like the Moab Activity Center in the middle of town).

My tour was booked for 8 am and so I was up at 6:30 in order to let the dogs out, eat some fruit and organize my pack. I headed out at 7:15 am, dropped my keys with one of the RVers up the road so she could let the dogs out mid-morning, and headed into town again.

Once at the office for Moab Cliffs and Canyons, the tour company, I again signed my life away with the standard waiver…the one that I almost never read because they all say the same thing (I do read some of them). I met John, our tour guide, a handsome young guy (yes, of course I noticed how attractive he was) who directed me to the packs of gear we needed to take. I transferred the harness and helmet to my pack and topped up my water as we weren’t scheduled to be back until 1pm. The shuttle driver, John and I jumped in the van and headed to the Moab Activities Center to pick up three other ladies who would be joining the tour.

Bev, Sabrina, Sandy and I quickly got acquainted as the shuttle driver, also called John, and our guide chatted together during the short 20 minute drive to the trail head. Our guide also asked if any of us had rappelled before…the others said no, I could actually confirm I had for a change although it was many years ago.

From the trail head we hiked about a mile to the first rappel, walking through recently-flooded washes. One thing that was quickly pointed out to us was the black, crusty-looking soil in many places. It is actually a very sensitive and easily damaged crypto-biotic soil that provides an unusual eco-system which helps the desert thrive by keeping water in the soil and building a nutrient-rich environment. It is also the slowest growing thing in the desert, taking 100 years to grow an inch…in other words DON’T step on it! 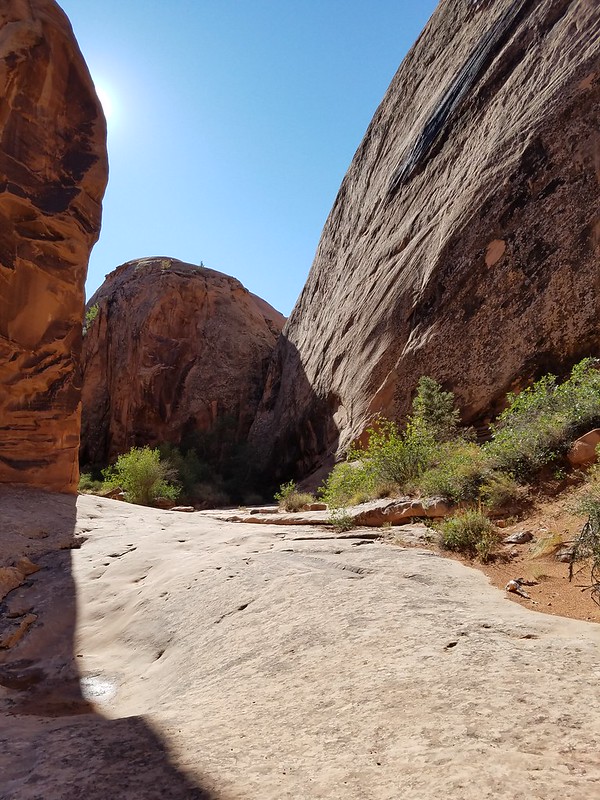 Another group of two, plus their guide, passed us before we reached the first rappel and it was as good a place as any for a pee break. (It should be noted that any solid waste MUST be packed out in this area…it cannot be buried). 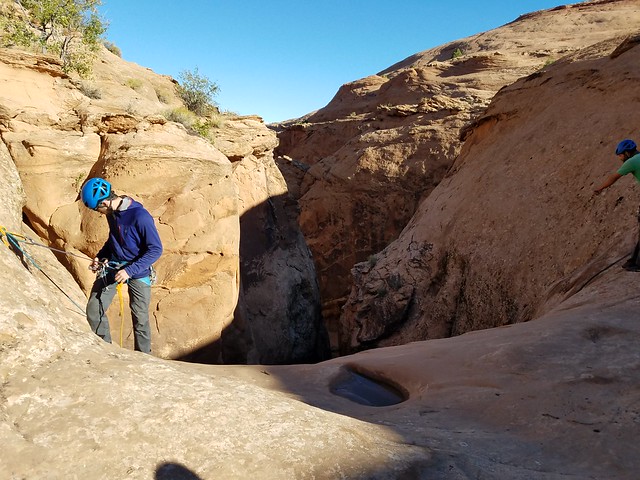 The first obstacle in our path was minor and involved a slight jump/large step across a shallow gully. It seemed fairly easy and I made the crossing with ease…the other ladies made it look a little tougher, but John was spotting at the bottom in order to help those who needed it.

From the gully crossing we hiked a little further along one of the many sandstone fins to a sheer drop into Ephedra’s Grotto. We were quickly warned not to get too close to the edge as it was curved and easily mis-judged…but I sooo wanted to look down and probably got closer to the edge than I possibly should have (10 feet was plenty safe). 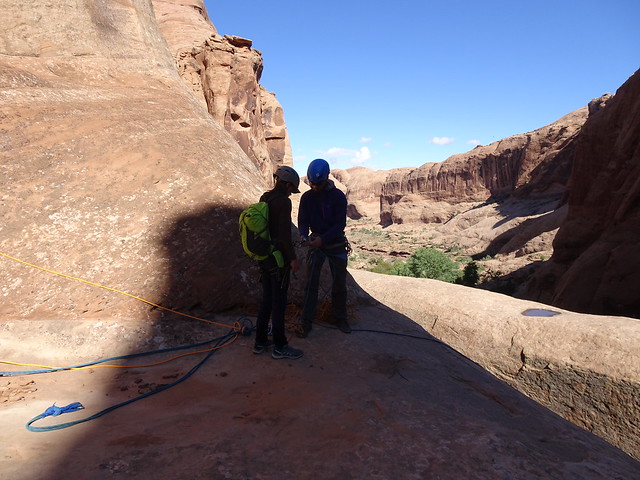 As John set up the ropes and carabiners for our first descent the other ladies and I talked and took pictures, we also put on our harnesses and helmets. The other group ahead of us were in the process of descending.

With ropes and safety equipment set up in the anchors John checked our harnesses, borrowed my rappelling equipment from my harness and showed us how to hook up, detach and control our speed. The reminder was good to have, and seeing that I had actually rappelled before the ladies were quick to offer me up as sacrifice and go down first. I would have volunteered.

John tossed a safety line to me which I hooked up before getting close to the edge then proceeded to join him at the anchor. He hooked up my rope and the safety line and I was good to go. The scariest part of rappelling is backing over the initial edge, right up until the harness feels secure.

While I hadn’t rappelled a very long time ago it all seemed very familiar and the correct form and actions came back quickly. My only mistake was in trying to fight gravity and guide/walk myself away from the natural direction I was supposed to go. I reached the first level after about 100 ft and got my feet wet in a foot of water…thank you rains from yesterday!!! I was regretting not wearing my hiking pants and wool hiking socks, but you live and learn. I crossed the pool and backed down over the next cliff into the dark abyss for another 40 feet. I managed to avoid the water at the bottom, unhooked the safety rope and sent it back up then unhooked my rappelling carabiner and stepped into the canyon to watch the others. 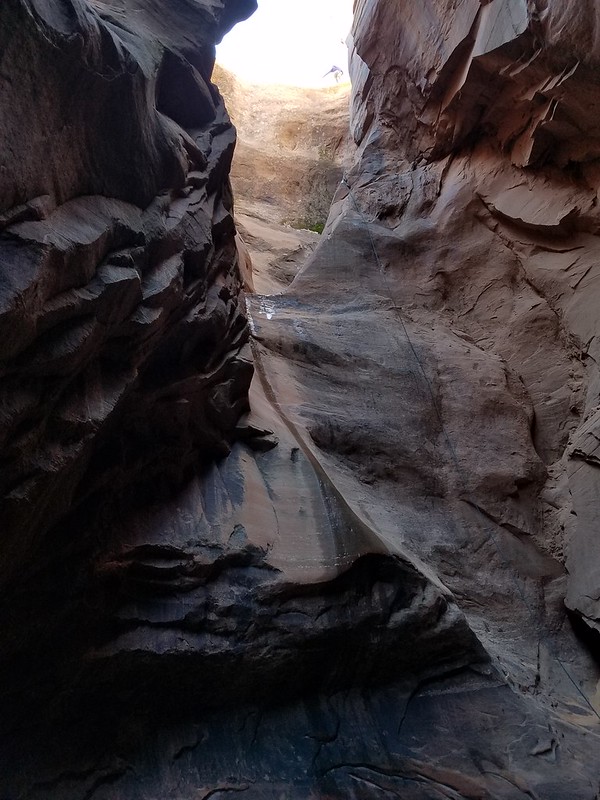 Sandy was the next to come down and I watched from the bottom. It was fun to watch others rappel and I yelled encouragement and tried to help improve her passage down with a little guidance regarding legs being out in front and not underneath (a hard habit to break as you want to reach for footing). She arrived at the bottom and I helped her unhook. Bev and Sandy made it down slowly but safely, both of them with the same trouble in keeping their feet in front of them and bracing against the rock. John was the last to come down, for obvious reasons, and it takes the guide a while as they have to reconfigure ropes to make sure they get both ropes down and don’t leave anything behind. Somehow John managed to keep his feet dry…it was either magic or some kind of aerial acrobatic rappelling we weren’t privy to! 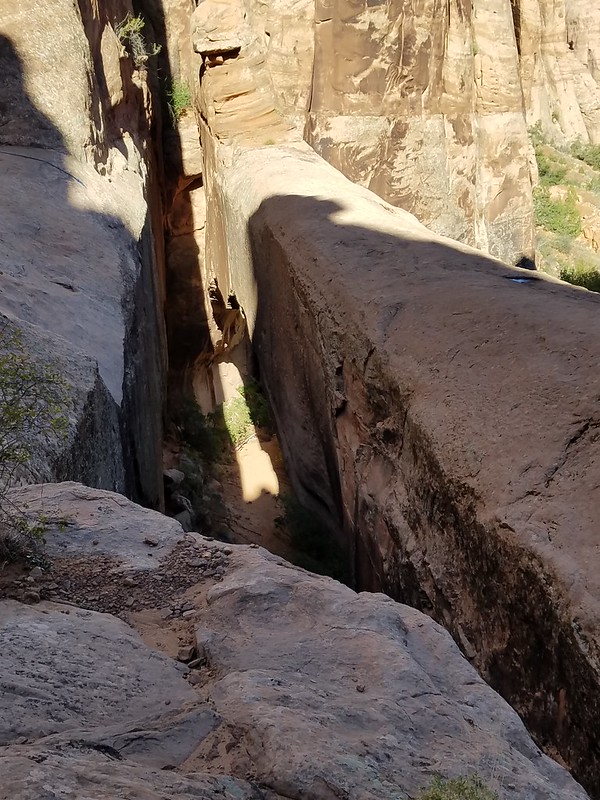 A short hike out of the slot canyon took us 100 yards to the second and final rappel. This one was located at Morning Glory Bridge at the end of Negro Bill Canyon. Sandy went first on this one as I asked her to video me coming down (the bane of being a lone traveler and adventurer). I went second. 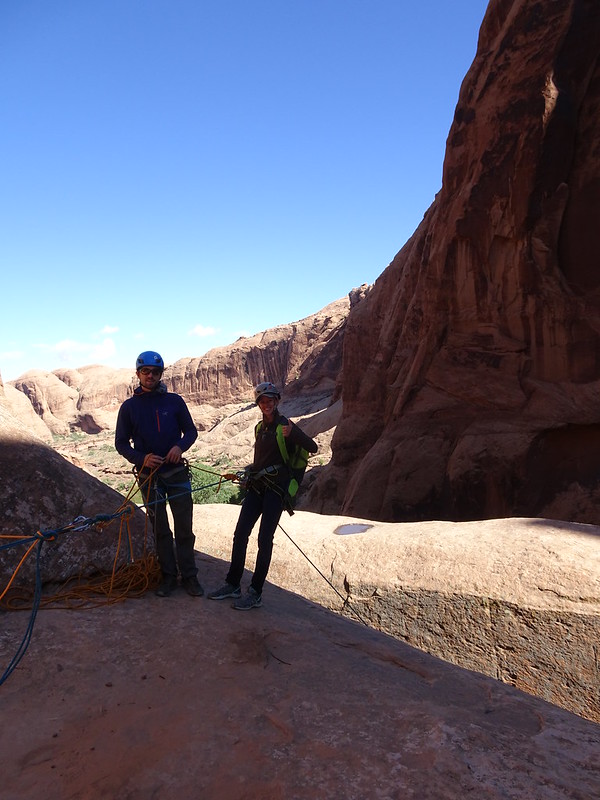 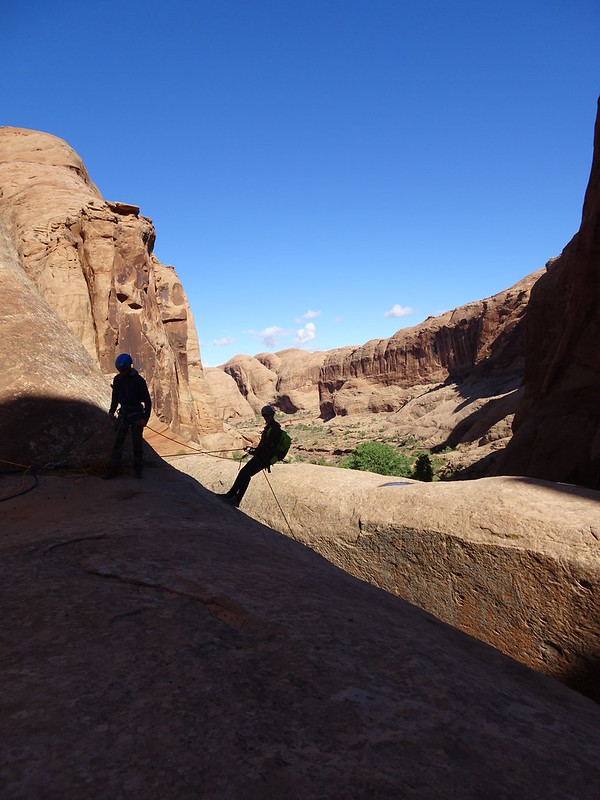 The initial drop-off you have to back over was a lot more pronounced on this rappel than the first and thus a little more nerve-wracking. I don’t find it scary but there is still a slight adrenaline rush as you lean over the edge, backwards. The first 20 feet or so is flat, vertical rock and thus a little easier to step down than the convoluted walls of the descent into Ephedra’s Grotto. However, after 20 ft the wall disappears inwards and I was left hanging in mid air as I dropped down, keeping a good and mostly even speed (although a little stilted with the safety rope) and avoiding spinning for the most part (speed makes the difference on how much you spin when descending without a wall). I looked down at Sandy and waved at the camera, and at the same time noticed the audience I had in the form of several hikers who had made the trek to see Morning Glory Bridge (land bridges and arches are formed by different acts of nature, hence the difference despite often looking the same). 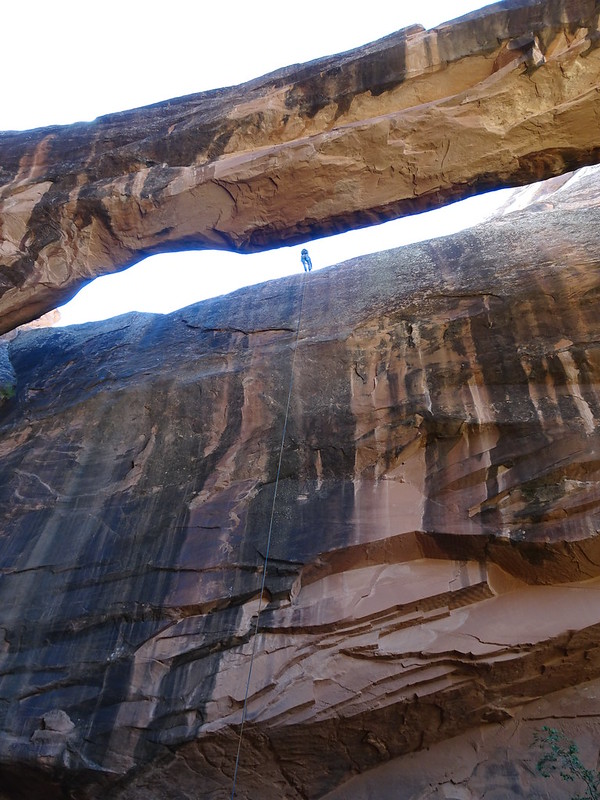 I made it almost to the bottom but John hadn’t quite been keeping up with me on the safety rope and I stopped two feet from having my feet on the ground. Slack was quickly given and I unhooked the safety rope, untangled the lines (happens when you spin), sent the safety rope back up and unhooked the rappelling rope. Bev and Sabrina followed, both coming slowly and turning into that dreaded spin that comes with canyon winds and a slower descent.

Yay, video of my descent from Morning Glory Bridge: 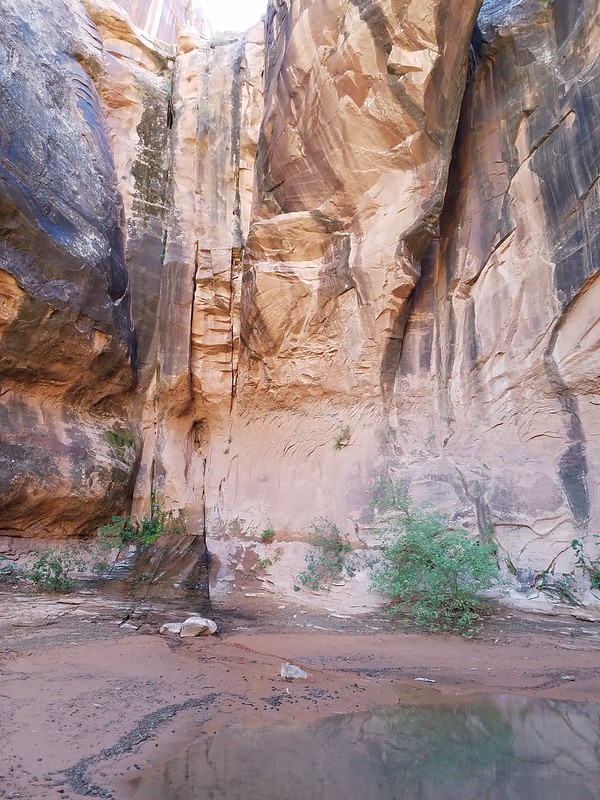 At the bottom of Morning Glory Bridge was a pool and a very unique spring looking as though it was flowing from the very cracks of the rock…it was very cool and very unusual. 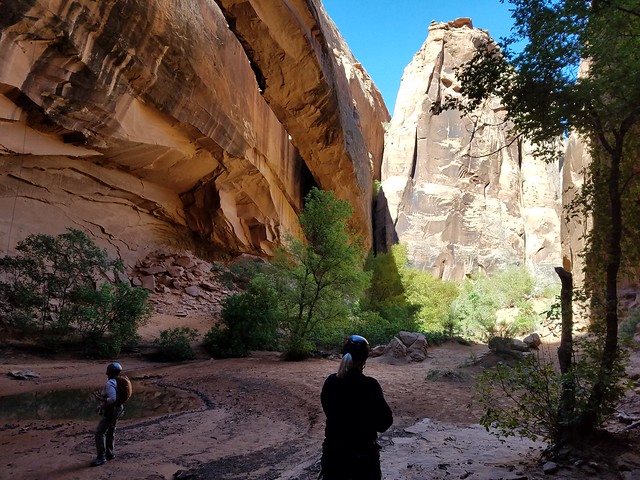 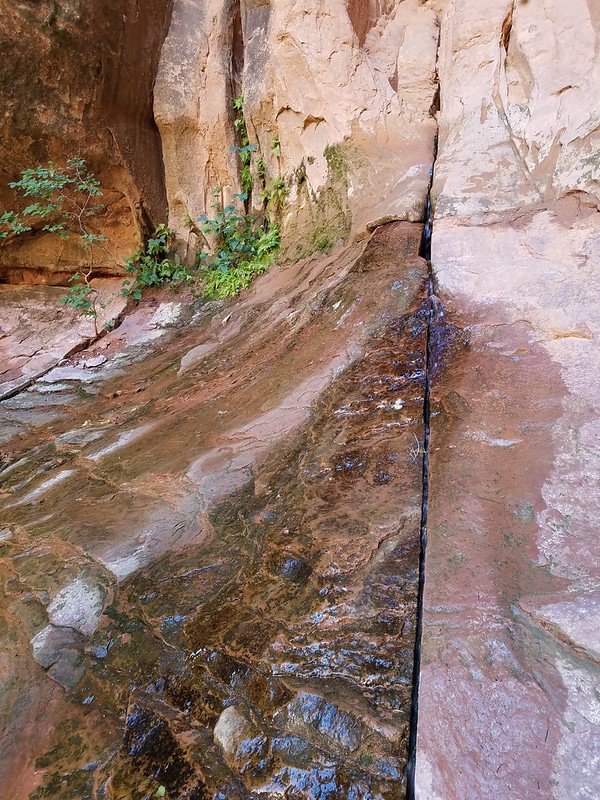 John got his ropes in order and descended quickly. He packed the ropes up and said we could remove our harnesses and helmets which we did with haste and then packed them away. We then had a mile and half hike to a different trail-head where the van was waiting for us. Sandy, John and I had a good conversation about Moab’s best eateries, the history of Negro Bill Canyon, and what he does in the off-season (guides mountaineering trips in Washington). The canyon itself was gorgeous and had the run-off from multiple natural springs flowing through it (we had to get our feet wet again at one crossing, even John) which seemed to make it a natural hike for those with dogs and we saw plenty on the trail. 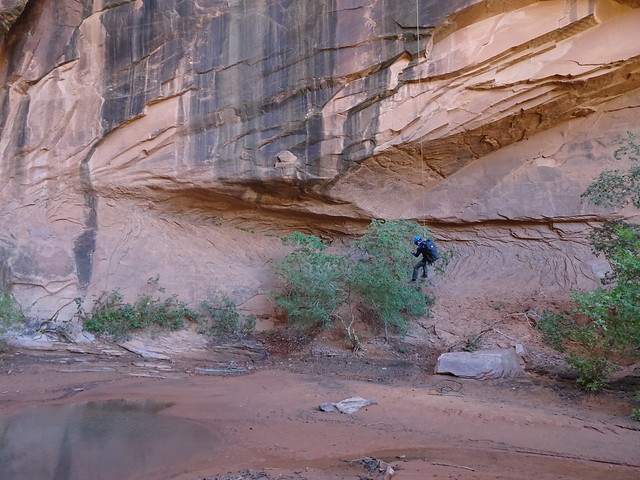 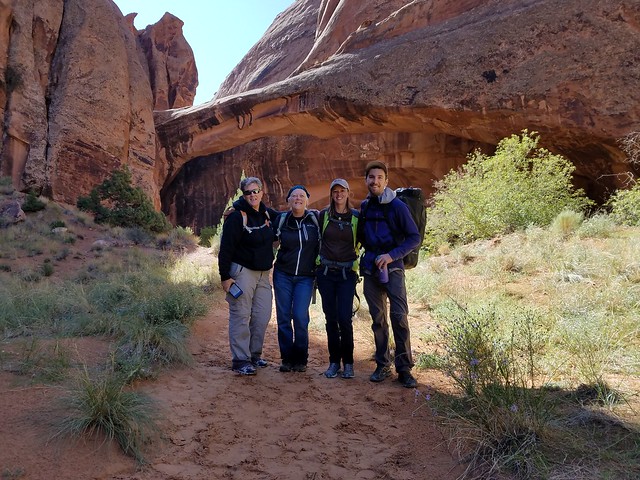 Back at the van we made the short drive back to the office, dropping off the other three ladies at the MAC on the way. I tipped John and grabbed a bite to eat at a local quesadilla food bus he recommended before heading home for the afternoon.

Moab Cliffs and Canyons was another very professional tour company for canyoneering and rock climbing trips. (The family of four from the zip lining had done a rock climbing trip with them the day before and also raved about them). John was exceedingly safety-conscious/oriented but was also friendly, fun and courteous. He really made the trip a lot of fun and the small group was nice.

Moab Cliffs and Canyons is located at 253 N. Main Street, Moab, Utah or you can call them at (435) 259-3317. You can also visit them online at www.cliffsandcanyons.com. They offer multiple options from the easy half-day trip to Ephedra’s Grotto, which involved minimal water, to three-quarter and full day trip, to multi-day, multi-canyon over-night excursions. Rock-climbing and hiking trips are also available and if they are anything like my canyoneering experience they can be recommended.