Access to the Fiery Furnace in Arches National Park is restricted due to the dangerous nature of the area; the ease of getting lost and the lack of water. Those who wish to access the Fiery Furnace require a permit and are required to watch a short safety video and it is recommended you go with someone familiar with the area, or you can join a guided hike into the area. I chose the latter. Fees are associated with both options.

I met the guide at the Fiery Furnace parking area at 9pm. The ranger’s name was Travis and the group quickly learned that it was his last guided trip into the Furnace and also in Arches National Park…he was moving on to other things. 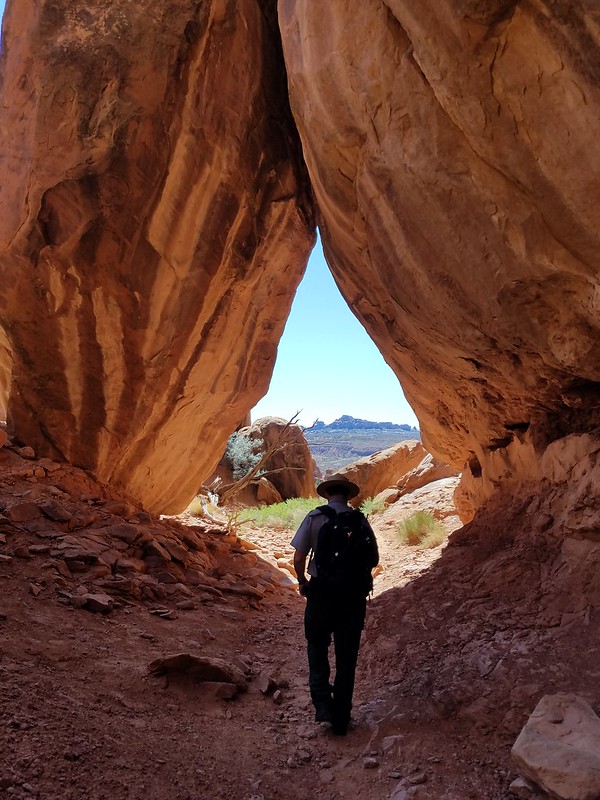 The reason I chose a guided trip for the Furnace was for all the great information that the rangers can provide as you visit certain areas. 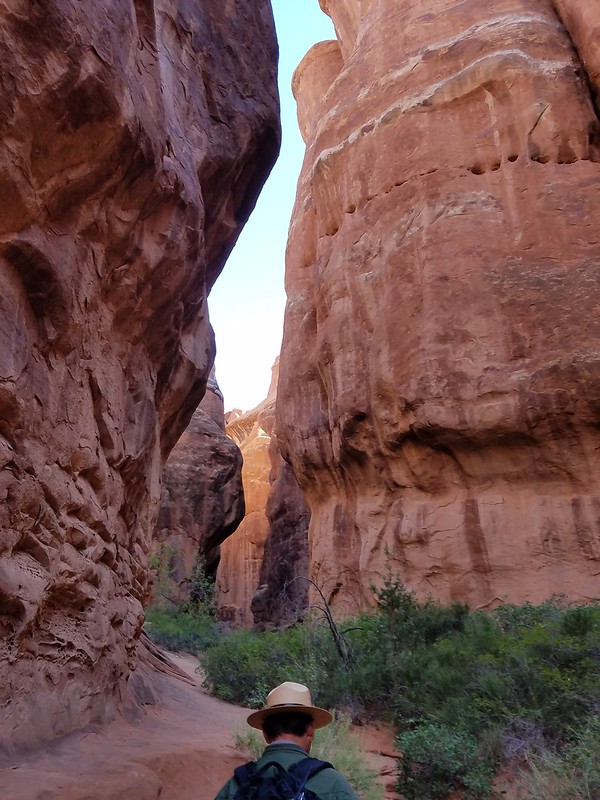 We hiked down hill a short way and Travis explained the geographical history of the area; the formation having had two parents to create it, one being the salt valley that resided below us, and the second being the powerful force of water (and a little wind). As we hiked down into the sandy washes we were confronted with some rocky, boulder-strewn trails. It was a minor test for what was to come but a good indicator about who might have problems and it was the last chance people had to turn back. Despite the quirky knee of one group member (not me) and the “experienced years” of another gentleman no one chose to turn back and we continued on. 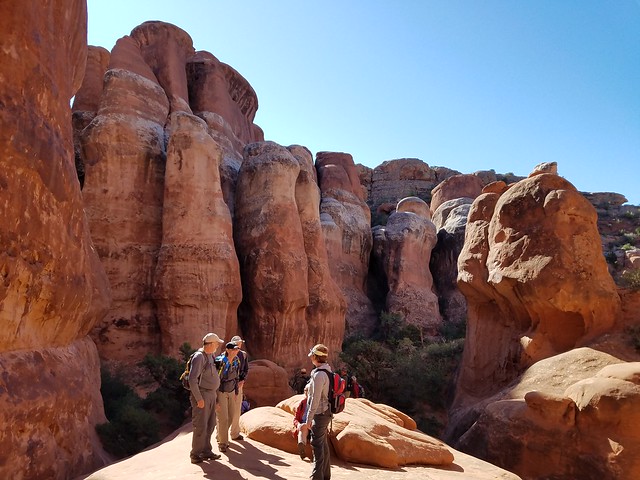 With the sandy washes behind us we entered into the towering spires, narrow slots and rocky footing of the Furnace. Sometimes it is good to be small and many of the climbs, canyons, and sliding between two almost-touching rock walls were much easier due to my size. Climbing the boulder field below Jackass Pass in the Wind River Range made this look pretty tame. 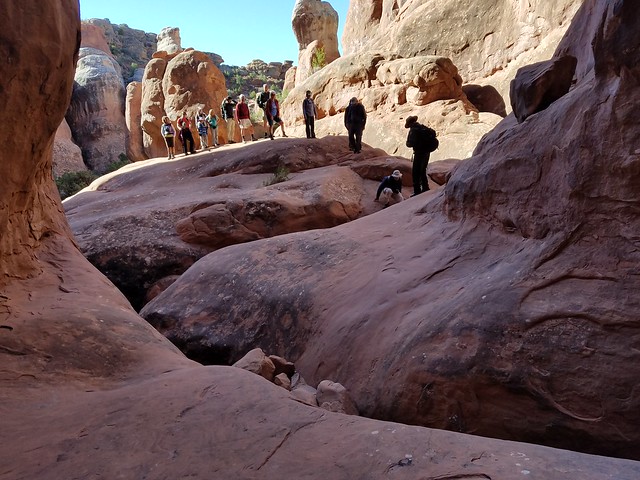 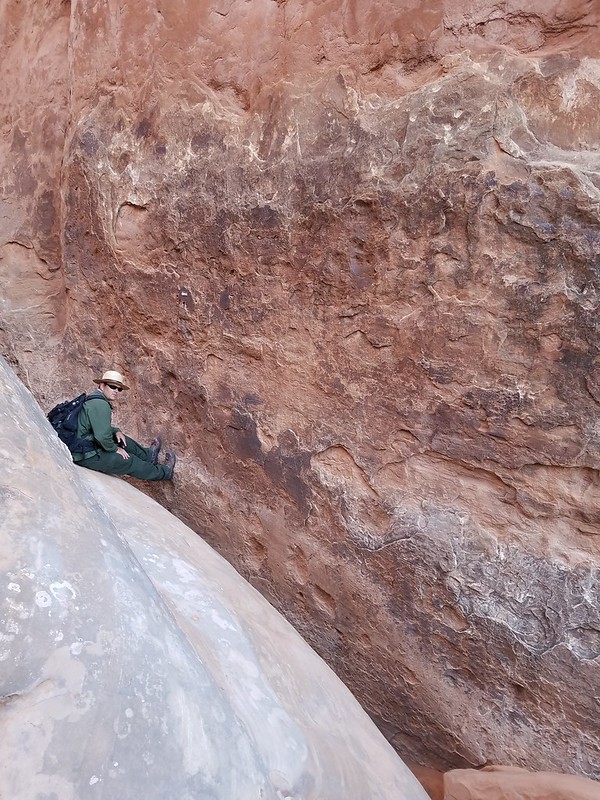 Travis led us into a handful of dead ends to show us a few of the formations that had been carved and formed over the years including a small land bridge (although all land bridges in Arches NP are called arches, no matter how they were formed) and Skull Arch which looks like the eye sockets in a skull.

There were many tight spots and a lot of rock scrambling, climbing, leaping, tip-toeing, leaning and sliding on your butt in many places but that was what made the hike even more fun. I tended to follow right behind the ranger as I was the youngest person in the group, other than a family with two small girls. 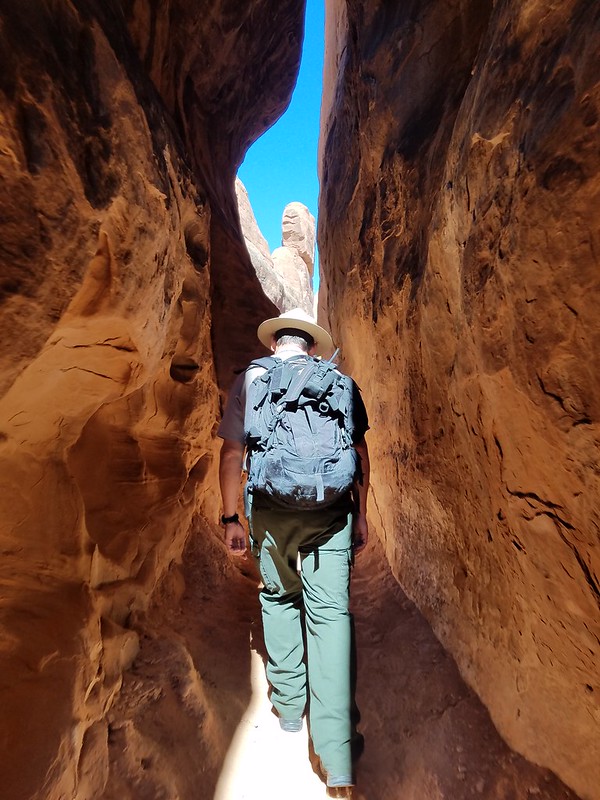 I did get talking with a very nice couple from Kansas City who had only started hiking within the past 4-5 years. They lived part time in their travel trailer in Tucson, AZ and were pretty determined to get out and do things while they still could…and they did great. In fact everyone did amazing, including the older gentleman who looked to be in his late 70s. I was very impressed. 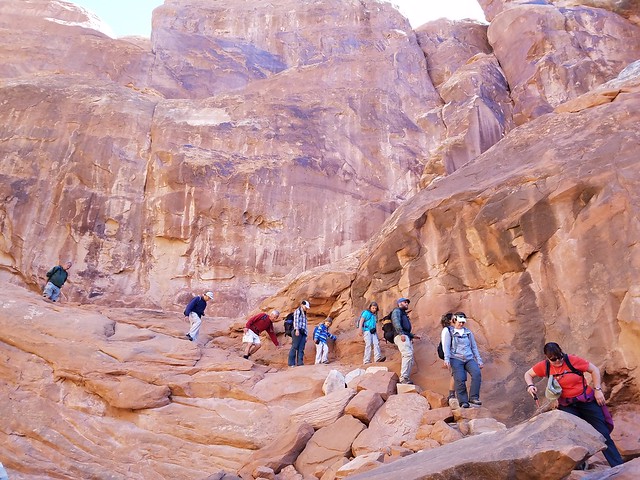 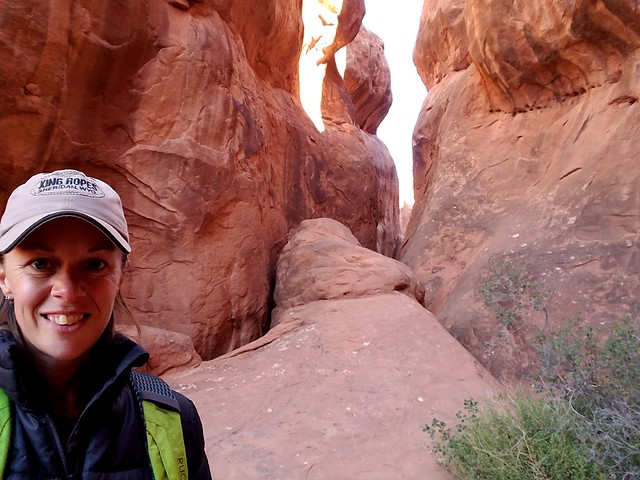 The tour took about 3 hours and we were back at the parking area at noon. I enjoyed it very much and highly recommend it. Tours do need to be booked in advance and they usually fill up 2-3 days ahead of time; I booked mine Thursday for Monday which was the next available guided tour.