Another early start to the day saw me arriving at the Arches’ visitor center at 6:45am and directed into the parking lot to wait until the park opened at 7. This gave me time to dump some trash and recycling, unfortunately the bathrooms were closed at the visitor center so I was going to have to wait. 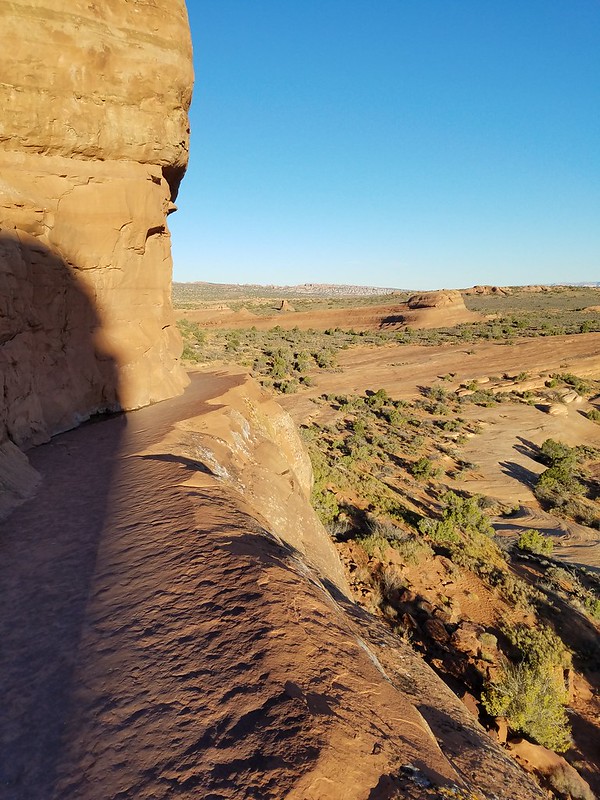 With the barriers moved a line of cars streamed out of the parking lot. I was fifth out of the gate and those of us in front soon left the rest behind (while still obeying the speed limit). Two of the front cars soon pulled off the road into turn-outs or turned towards ‘The Windows’ section, presumably for the sunrise. I continued on to Delicate Arch where I was the third on the trail for the morning. I quickly passed a slightly older couple and a younger Asian couple (the young lady had twisted an ankle) about half way through the hike. 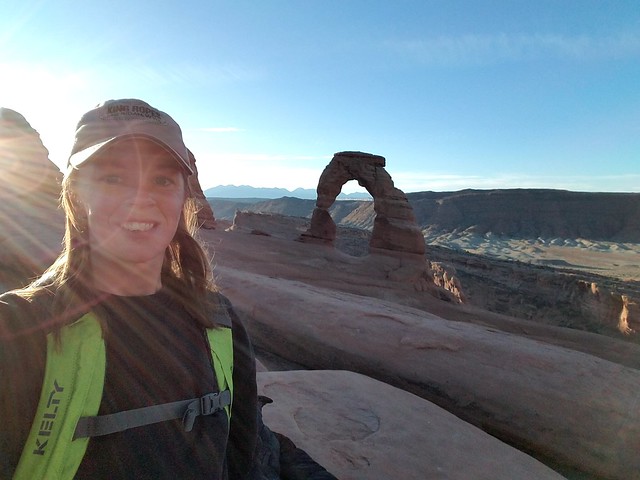 I pushed myself hard and followed the cairns to the top, rounding the corner of a narrow rock-ledge trail to behold Delicate Arch in the early morning sun. I was the first one there and enjoyed a few moments of having the park’s most famous arch all to myself. The others I had passed soon arrived and the older couple were kind enough to take a picture of me under the arch. 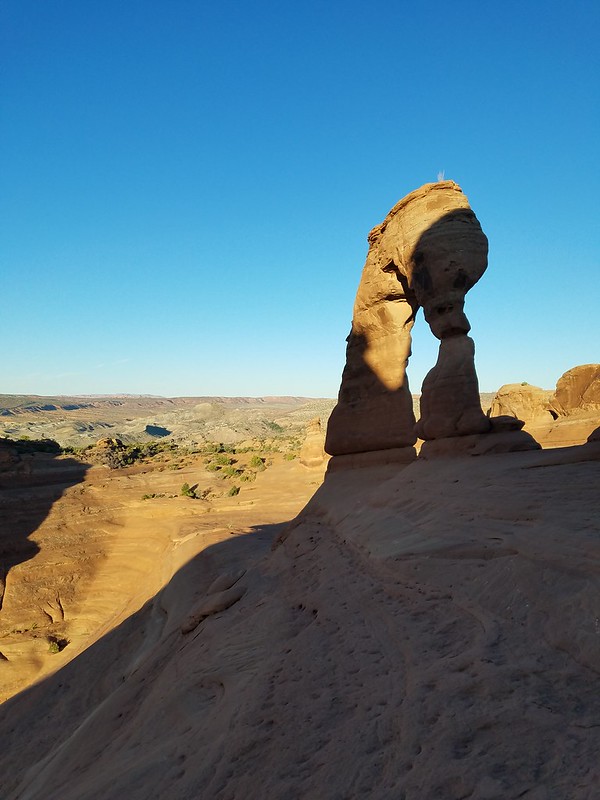 More and more people began to arrive and I decided it was time to head back down the trail. A few people asked how close they were to the arch as I hiked down, and some asked me what time I started since I was already almost back to the parking lot by 8:30am…when most people were just starting up the trail. 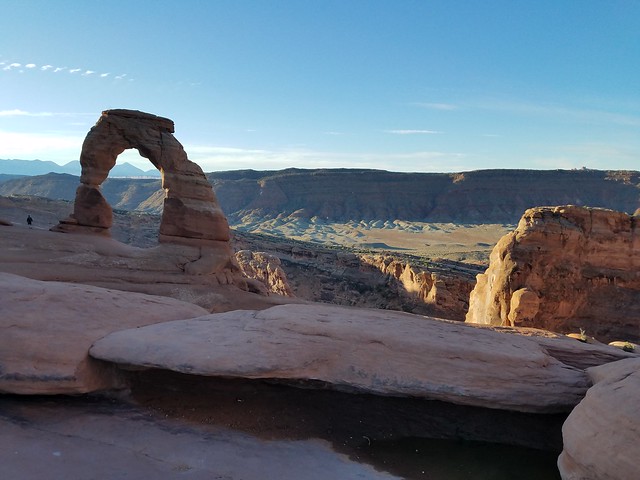 From Delicate Arch I made the short drive to see Double Arch, Turret Arch and the North and South Windows arches, all of which are massive and awe-inspiring. With the parking lots getting busier and busier I finally headed out of the park at 10:30 and headed back to the camper for a few hours before heading back out for some riding. 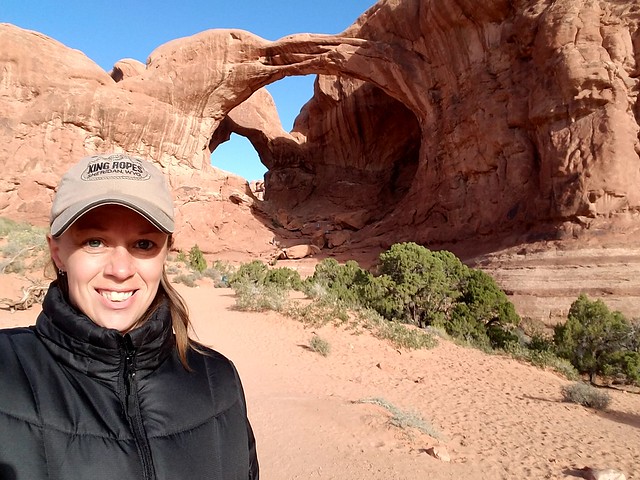 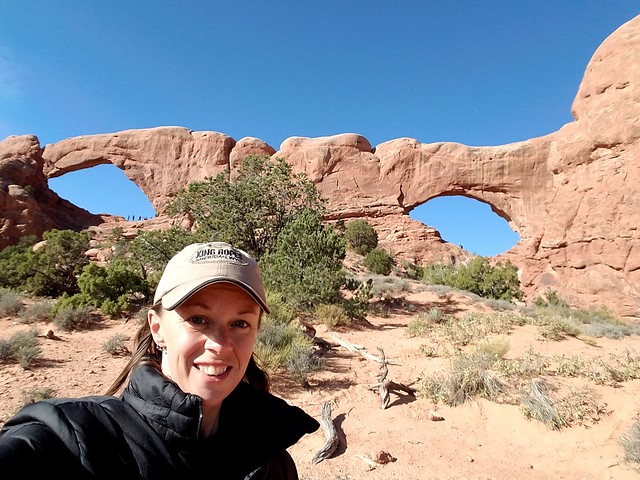 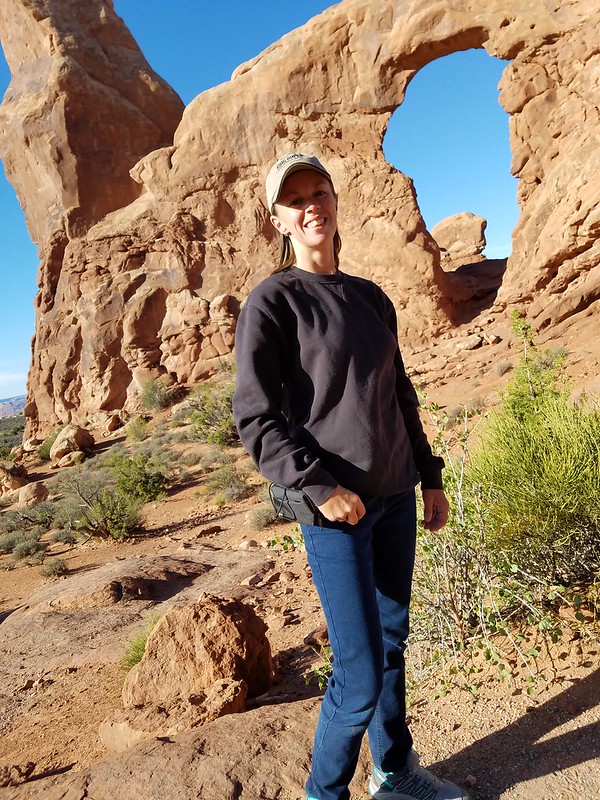 I had booked a 4pm ride with Moab Horses at Hauer Ranch and left camp at 2:30pm, not quite sure how long it would take me to get to the riding facility. I had chosen this particular place due to the location (near the Fisher People and Castle Valley) and also because they were one of the smaller operations in the area, and I like to support those kinds of places. I also tend to find they offer a more personal approach to guests. 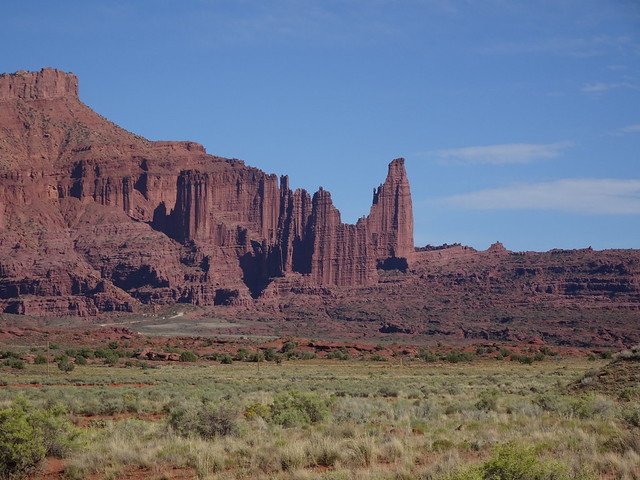 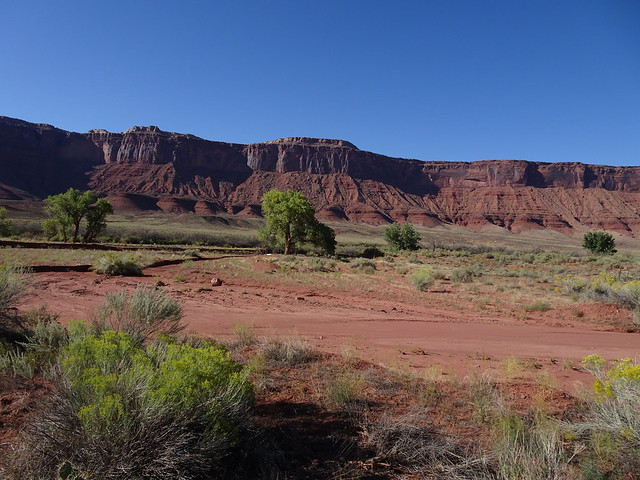 I took the dogs with me and stopped to let them play in the Colorado River before heading to the ranch. I arrived way too early and sat chatting with the wrangler, James, and the owner, whose name I didn’t get. James was still saddling horses while I signed yet another waiver and paid. I had forgotten my water bottle AND my sun block so I chugged some water from a hose and borrowed some sunscreen from the ranch’s supply (those bottles left behind by many guests ahead of me). I chatted with James, the farrier and the owners while they saddled up or brought horses in for shoeing. We talked about the ranch I used to own and the kind of work I used to do with horses and cattle. 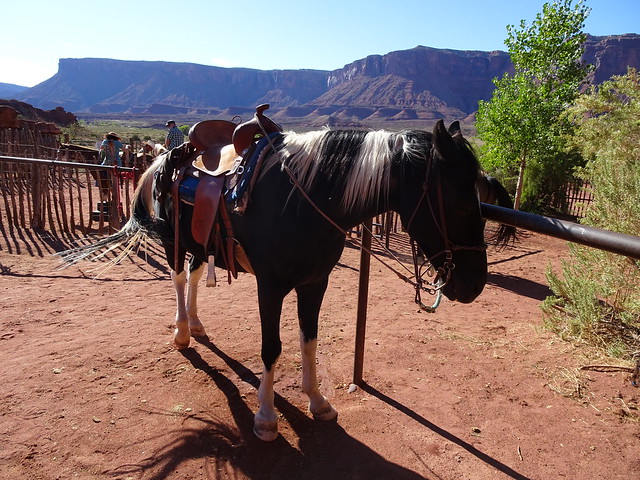 Four other guests arrived and we were soon ready to go. A quick safety talk was followed by us being assigned our horses. I was given a black and white paint by the name of Cash. The others were on Hondo (a spotted appaloosa), Sassy (a dark dun), Gem (a halflinger) and a red and white paint whose name I also didn’t catch. James’ directions were mostly decent but balance and foot placement in the stirrups was not addressed, and that later became painfully obvious with the nervous novice rider on Sassy. 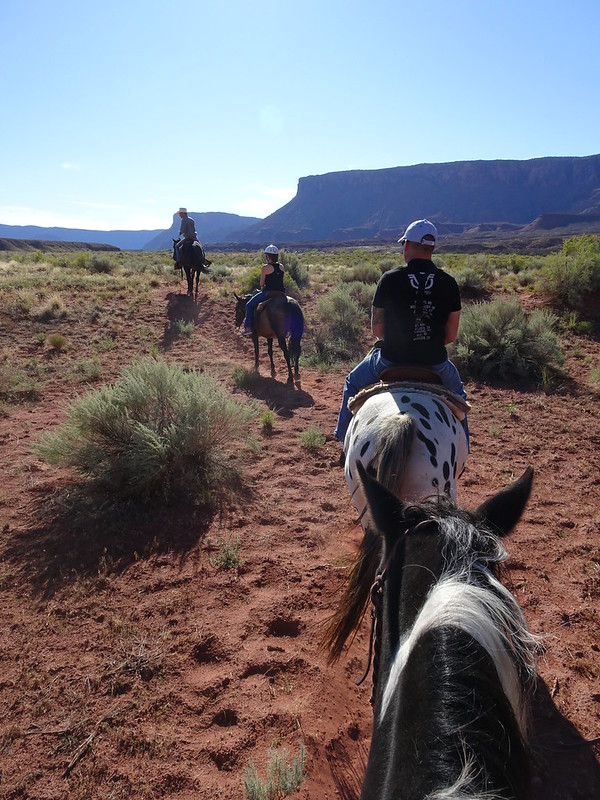 With everyone mounted in the round-pen we headed out into the desert. The initial half hour was flat but with stunning views of the red cliffs and Colorado River, and we also saw a bald eagle…a rare sight for so early in the season. I got to talking to the older couple (both pyschotherapists) behind me who were in the Moab area for a week on vacation. They both seemed to be enjoying their horses. 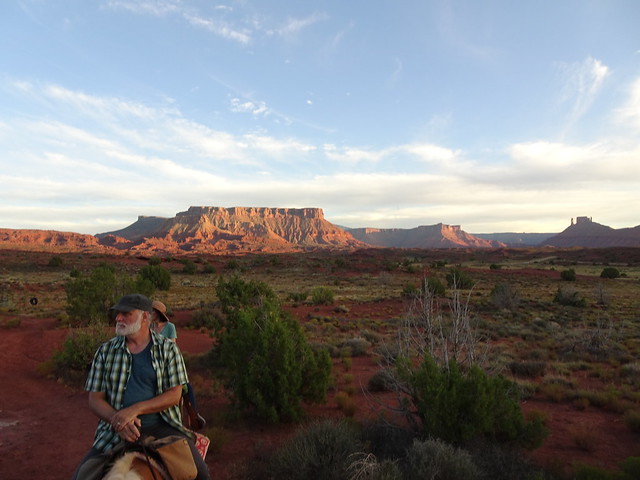 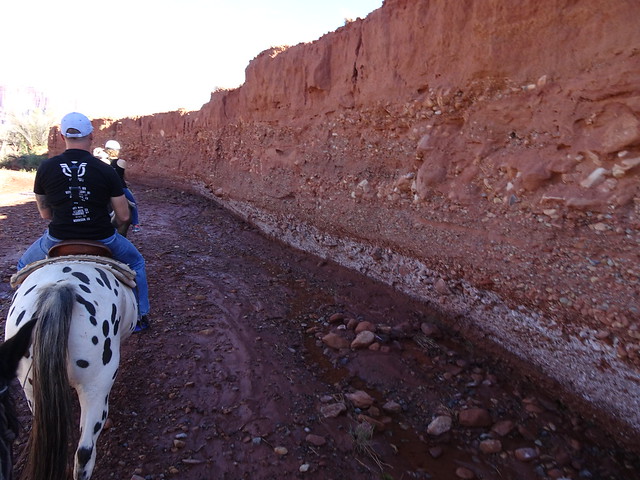 With the easy part behind us we followed Onion Creek east towards Fisher Towers, crossing and re-crossing the creek. Onion Creek is so named for the wild onions that grow in copious amounts along its banks. Still following Onion Creek we rode beneath the highway. The young lady on Sassy was struggling to control her mount who really had a mind of her own, took her through bushes and off the trail. James did a pretty good job of helping her out and instructing her in what to do. 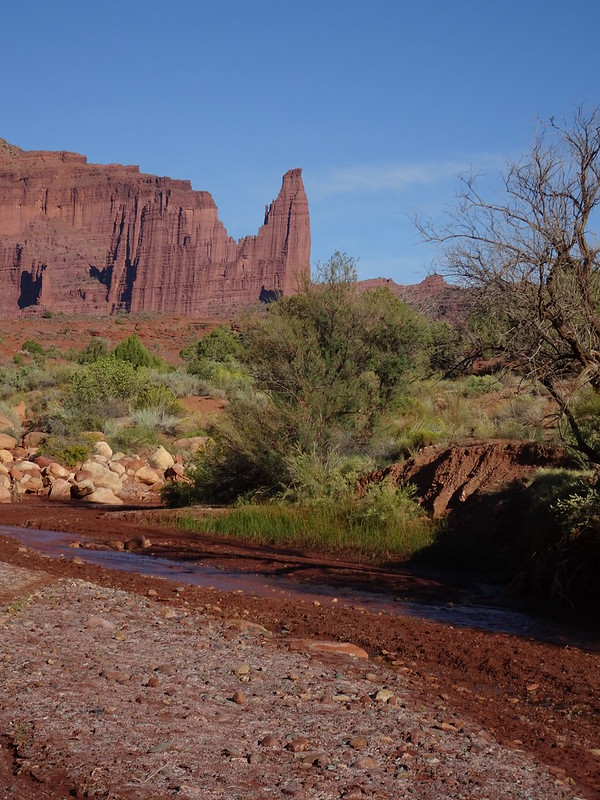 I was very much enjoying my horse, Cash, who was fun, spirited and very light on the mouth. He listened well but would have been a handful in less-experienced hands. I also discovered that he was a gaited horse after trotting through a couple of wash crossings. 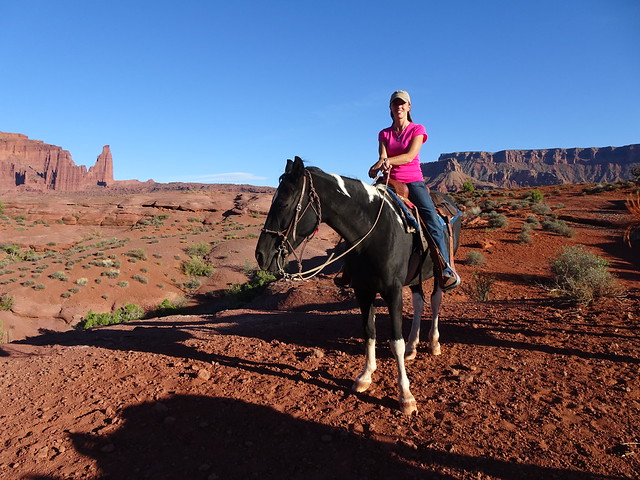 We finally left the creek bed and climbed up and up, following trails and other washes until we had the best views yet of Fisher Towers, a group of over 100 towers and each of which is named. James was good about talking about the history of the area, including the filming of many of John Wayne’s movies and City Slickers 2, as well as Bon Jovi’s “Blaze of Glory” video. 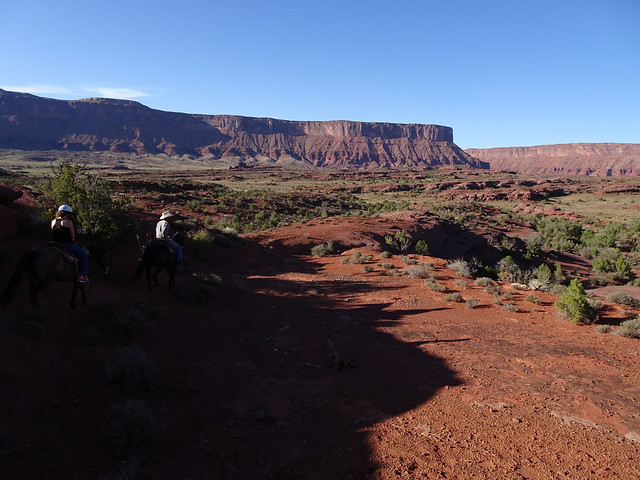 After 2 1/2 hours we turned back across the road and found ourselves back at the ranch, where we were greeted very enthusiastically by the ranch dogs. We all dismounted and handed our horses back over to the ranch. I was a little sad to say goodbye to Cash…he is exactly the kind of horse I would buy if and when I get back into horse ownership.

I headed back into Moab to get gas and then headed for home. I let the dogs out to run and fed them before heading over to the Class A camp to enjoy a couple of drinks with new friends on my last night in Moab.

Moab Horses at Hauer Ranch were courteous and professional and the scenic ride was gorgeous. For $80 for a two hour ride they are right where I think they should be (after having worked in the industry for many years). Moab Horses are located located 21ish miles north of Moab along Highway 128 (the River Road). The ranch can be reached by calling (435) 259-8015 or you can find their website at www.moabhorses.com.