On my way home from riding I noticed my engine temperature gauge wasn’t registering. I was a little concerned but after having one of the guys check it out with his computer I determined it wasn’t the thermostat and was most likely just a sensor. It was still something I would have to spend more money on to fix.

This morning saw the jack I had previous paid to have fixed at Stalkups RV in Casper quit retracting again. I halted the motor, lifted the manual legs and left both jacks as they were. I was PISSED OFF to put it mildly.

With everything loaded I headed out of the campsite, pausing to say goodbye to a couple of the people in the Class A campsite and hit the road. My temperature gauge still wasn’t working and with the non-working jack an issue again I was feeling pretty stressed and emotional.

I called Stalkups RV and spoke to Dan in the service department who said they would stand by their work but would need me to take it into a repair shop. If the repair shop determined that Stalkups was at fault they would need to call them and inform them before Stalkups RV would cover the bill, but that they WOULD stand behind their work if they were found to be at fault.

I paused in Green River to chat with a mechanic and he informed me of a Ford dealership in Richfield, 120 miles away, who would be better able to diagnose the issue regarding my temperature gauge. I had to cross 3 mountain passes on my way there and I was certainly nervous…I don’t like not knowing what is going on with my engine, especially when hauling a heavy load. Using the AllStays app I was also able to locate an RV repair shop which happened to be right next to the Ford dealership.

I stopped in at Jorgensen’s RV and they were able to get me in immediately (unusual but appreciated). The repair technician pulled apart my jack and determined that Stalkups had indeed used the wrong part (a roll pin vs a shear pin) for the jack. A call was made by one of Jorgensen’s office staff to Stalkups RV informing them of the fault but was apparently rudely informed that they would not cover the work, despite what they had told me earlier.

The repair technician made another discovery in that the repair that should have been done initially was NOT in fact a shear pin issue but a gearing issue. I had paid Stalkups RV a decent chunk of change to fix the jack, which they had not in fact done (I had not been shown the broken part either), and was now having to fork out a lot more money to have it done right.

With my jack finally fixed, and feeling a lot more broke, I wasn’t in the mood to go much further and once again used AllStays to locate a place to camp nearby. South of my location was Mystic Hot Springs, a small RV/tent camping park attached to some hot springs. The reviews called the place funky and the website showed old cabins and buses to stay in. I don’t usually do RV parks but the $30 price per night included full hook-ups and passes to the hot springs. I was in need of a break and since Ford hadn’t charged me for diagnoses of my gauge issue (two sensors needed replaced) I put that money towards two nights at Mystic Hot Springs in Monroe. The place certainly was quirky, and certainly not for those interested in a fancy RV park, but it was my kind of place and I quickly found a suitable pull-through site and set-up, opposite some buses that people either live in or stay in. It definitely recommend it. 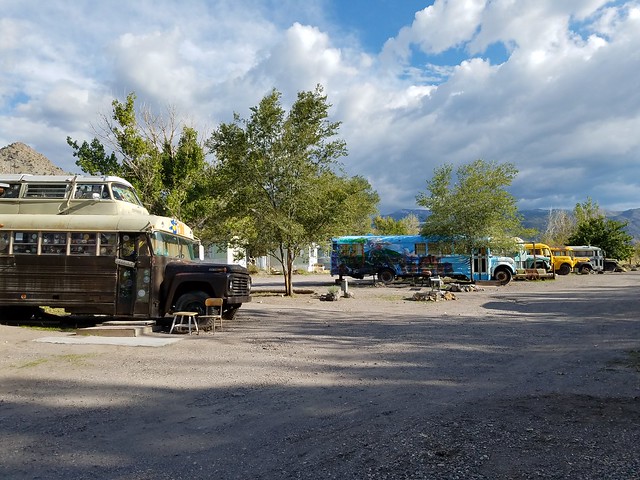 It was nice to have electricity for a change and to use my TV and free-standing lamps as well as start charging some of my AC electronics without having to cart them to the truck.

A large group of tent and truck campers was growing slowly behind me and on my way back from a short walk around the hot springs I asked one of the older guys if it was a bachelor party (no women). I was informed it was a group of para-gliders and hang-gliders in town for a week-long meet-up/event. I was invited to come say hi, which I did.

I spent a couple of hours with the group, meeting a few and getting first names and where people were from…Idaho, Utah, Alaska and more. I enjoyed a roaring fire they got going before excusing myself to go enjoy the hot springs I had, in essence, paid for.

The hot springs themselves were very rustic-looking and included two pools, one large warm pool and a smaller hot pool. Above the pools, after climbing some rough rock steps, there are bathtubs with spring water flowing into and out of them constantly. When checking in the owners inform you about the hot springs rules: no alcohol, no nudity and no pets permitted in or around the hot springs (although all but the nudity are permitted in the RV park).

Two others were in the pools when I arrived but it was dark and didn’t say hi, nor did they acknowledge me. I disrobed and climbed into the larger of the two pools which had a small waterfall pouring into it. I floated for a while and enjoyed the warmth, remaining near the waterfall where it was slightly warmer. The two ladies left soon after and I was alone. It was relaxing and much needed after a rough day.

With the rain starting to fall lightly I moved to the hotter pool and enjoyed the heat for a while before it became too much. Being a little too hot now getting out into the cool night air wasn’t too bad and I wrapped myself in my towel, grabbed my clothes and headed back to the camper. I was glad I had remembered a flashlight as none of the pathways were lit.

I re-dressed quickly and headed back out to the bonfire where things were getting a little raucous. It was fun and interesting to listen to the guys talking about paragliding although I didn’t understand some of it. Paragliding has been on my bucket list for a while and meeting these guys reminded me of that and not to forget about it…they were definitely enthusiastic.

Warmed by the hot springs and then the fire I was getting drowsy, bid the group farewell and went to bed. I’m not sure how long they were up for as I was quickly asleep.

I had two nights booked at Mystic Hot Springs so I enjoyed the day in between doing very little. I made a quick trip into Richfield to get some groceries and fill up with fuel but I spent most of the day enjoying having an electrical hook-up, listened to Pandora,  watched a DVD and wrote. The evening progressed much the same as the night before; hanging around the camp fire, drinking a beer or three, talking with the paragliders, enjoying the hot springs and then the fire again before hitting the hay at 10pm.

I was up before the sun and it was another chilly morning. My heater had done a good job of keeping the inside of the camper perfect (it got a little hot in the middle of the night so I had to turn it down). I let the dogs run one last time and packed up camp before saying good bye to the guys I could see.

I was on the road by 9 am and heading for St George. I chose to stay off the interstate and instead took the scenic route to the east. It was generally a pleasant drive and we stopped on the way up the pass going west to make a sandwich. Coming down the other side was beautiful but a lot less fun and I allowed the pressure of traffic behind me into making a mistake…I tried pulling off too fast, on too steep of a grade with too much momentum and almost lost my brakes. Thankfully I was pulling off against the mountain and the only thing I would have hit was a pole, but it was still not a good moment. I let my brakes cool for a while before heading down…and I waited for a large gap in the traffic before pulling out. Anyone behind me from here on out was just going to have to be patient as I wasn’t going to make the same mistake again.

The view at the top of the pass before making an error in judgement: 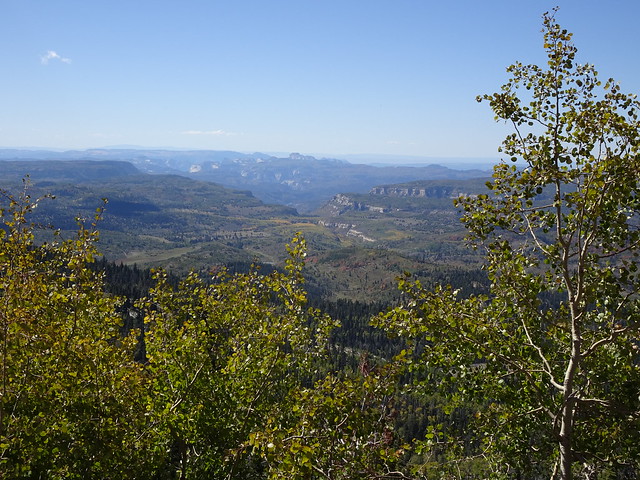 A brief pause in Cedar City at the bottom of the pass gave my truck and me a break before continuing south. I used one of several apps to find a good and free boondocking location but the first place I looked was full. A little frustrated I did another search and found a place above La Verkin on BLM land, above the Virgin River and the dam (although not visible from my location as I didn’t want to drag the camper too far on rough dirt roads).