It is rarely good to try and find a free boondocking site on a Friday, or a weekend generally.

Of course that didn’t stop me and the first place I looked, listed on freecampsites.net, was completely full…and not a particularly fun road to drive with all the washboards. Camp sites were right on the road and not that appealing so I moved on.

BLM land was listed on the eastern side of La Verkin and Hurricane, south of the road as you head into Zion. It looked promising. I took the first road and quickly found a nice large, flat spot to park and unhook. For some reason there was also a tiny house parked just before me which seemed to be a rental as the cars parked outside were never the same. I can’t find any information on this though to confirm. 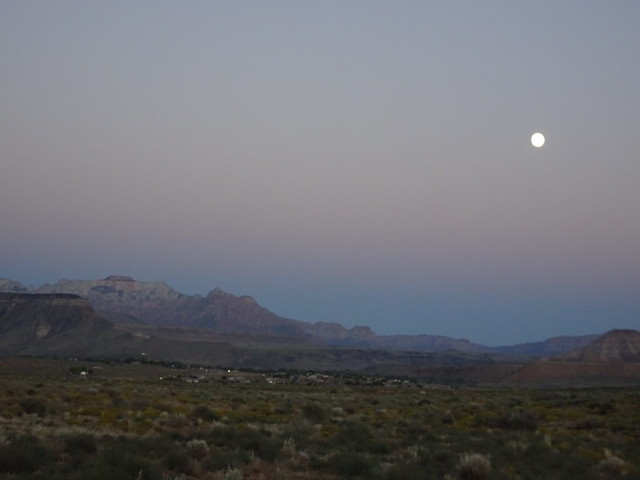 With camp set up I headed into town to locate the Ford dealership. While they were booked out two weeks ahead for newer vehicles, having a 7.3l diesel has its benefits and a simple repair was all that was needed…and they could get me in Monday.

With the truck issue taken care of I went to explore Camping World (an RV “super-store” much like Walmart) as I had heard many things about it but never been in one. It was interesting to wander round and I saw a couple of things of interest, but nothing I needed (still looking for a retractable clothes line). I also visited the mall…just because…but it was nothing special and my favorite stores weren’t even open yet.

I took a back road around St George and discovered the cheapest place to buy diesel in the area. I kept it in mind for Monday. With little to occupy me in the city I headed back to camp, stopped briefly at Walmart and a gas station for some cold brews and sodas.

The weekend was fairly relaxed and we didn’t do much except a couple of short drives around the area and fill out some job applications.

Monday I headed back into St George where my truck was finally fixed (not inexpensively either), and I felt even more broke. These fixes have seriously been eating into my savings and I was starting to get a little concerned about my financial situation. While taking my truck to Ford wasn’t the cheapest alternative it was also a positive as they also replaced a sensor that had been on recall, and thus was done free of charge. With my two other sensors replaced (coolant temperature sensor and exhaust back-pressure sensor for the turbo) I headed back to camp…I immediately noticed an improvement in the power of the truck due to the replaced exhaust sensor which was great. 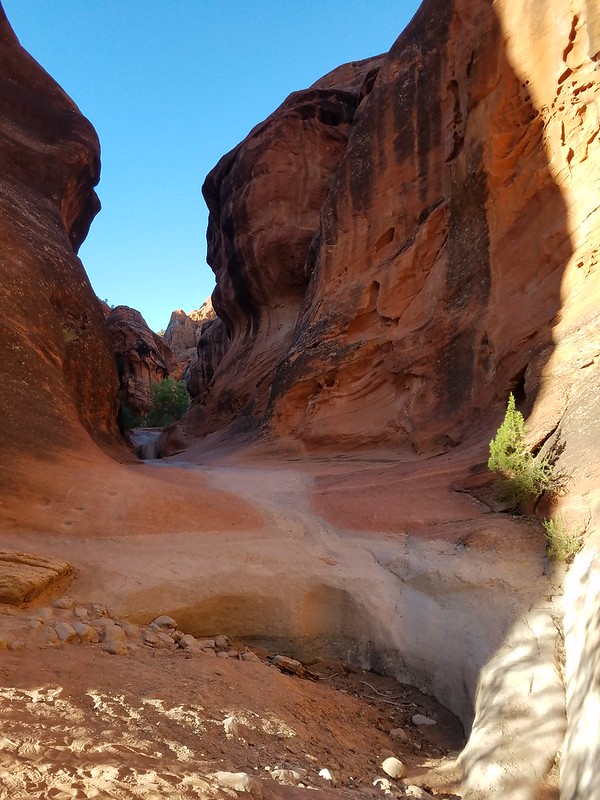 A friend posted some southern Utah hiking recommendations and I read through them…three were in my area…and Tuesday morning I headed out to do the Red Cliffs hike with the dogs…a short mile-long hike to a red cliffs canyon (no surprise there!). 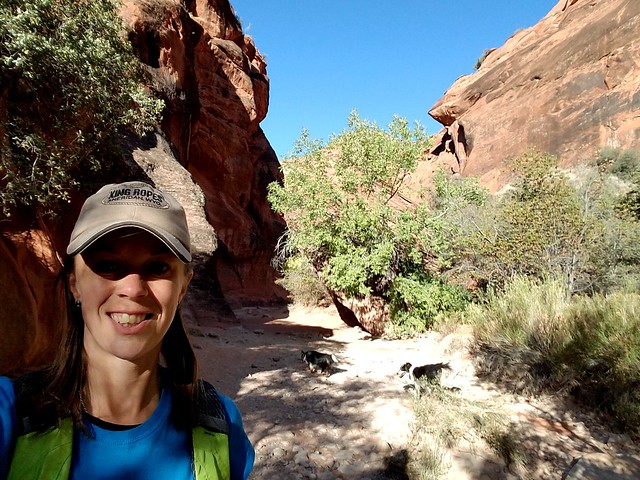 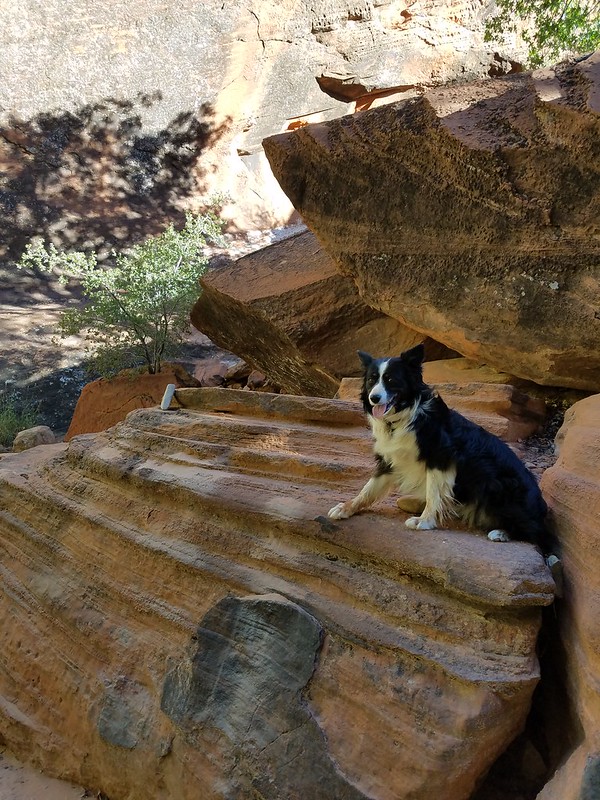 It was perfect weather and it was nice to hike with the dogs again and while I kept Kye on leash for a change I let Cody have some freedom. We had to turn around at a narrow gap as the dogs couldn’t climb the rock and it was too far to carry them, not to mention dangerous. It was an area there would have been a waterfall if there had been any water flowing. I climbed up where the dogs couldn’t go…where ropes had been anchored to the wall for safety…and took a few pictures. It would have been amazing to go further but with my best friends with me I could go no further…they were already looking a little forlorn that they couldn’t follow me up the water-fall cliff. 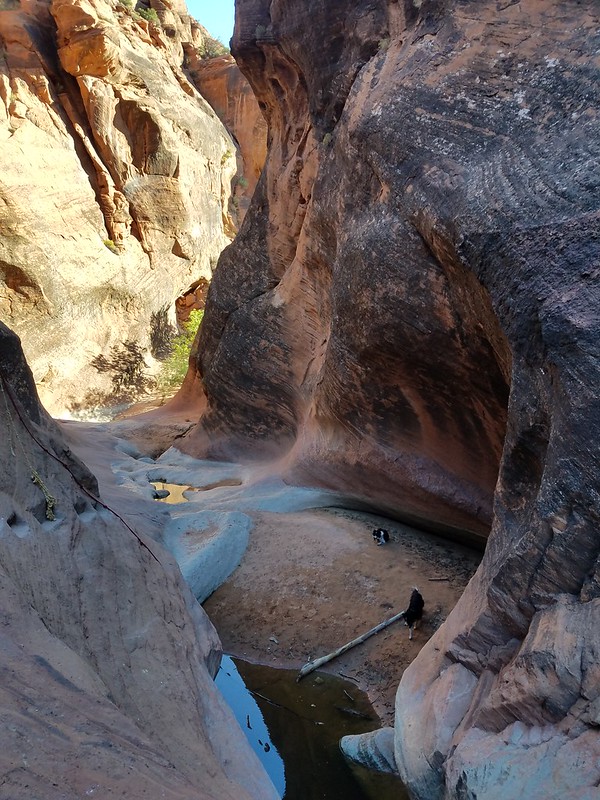 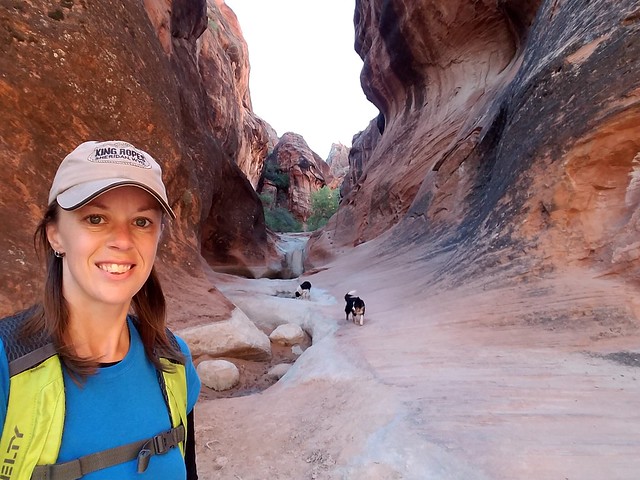 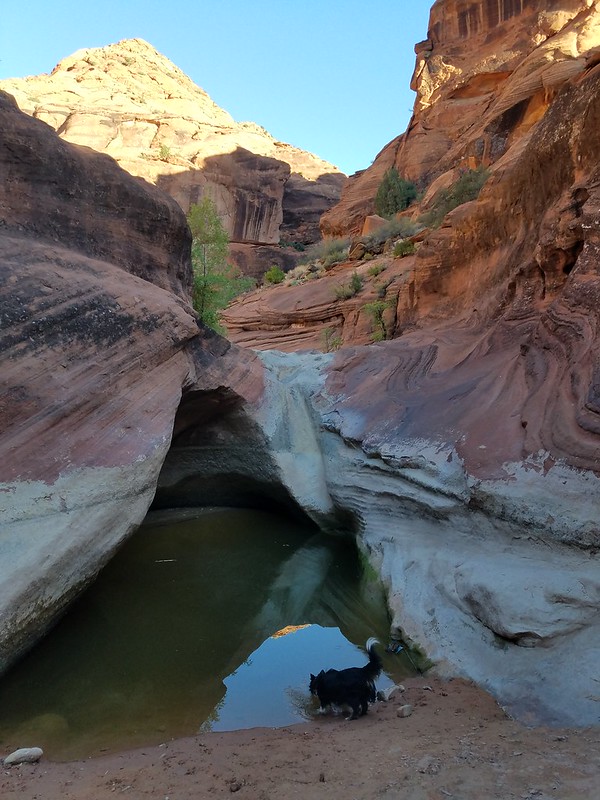 Someone had left a plastic water bottle full of water to the side of the canyon which I went to pick up. Upon closer inspection I noticed it had two tadpoles in it…someone had scooped them up in the bottle, sealed it and left them to die there. I dumped the bottle in the pools where there were other tadpoles and stuffed the bottle in my pack…some people are disgusting human beings. 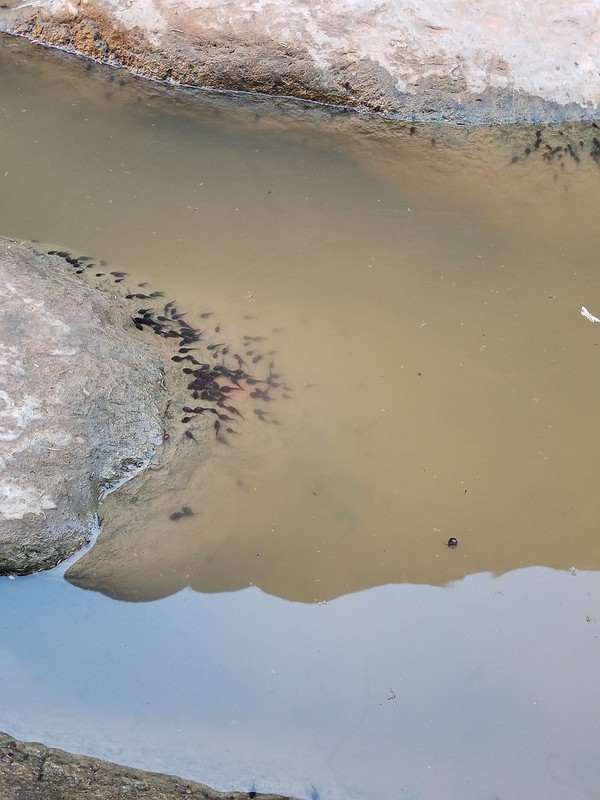 Back at the truck I dumped the trash in the trash can and headed back to camp for the afternoon. I highly recommend this hike; it is not particularly challenging but I assume it could be tougher once you get further into the canyon. 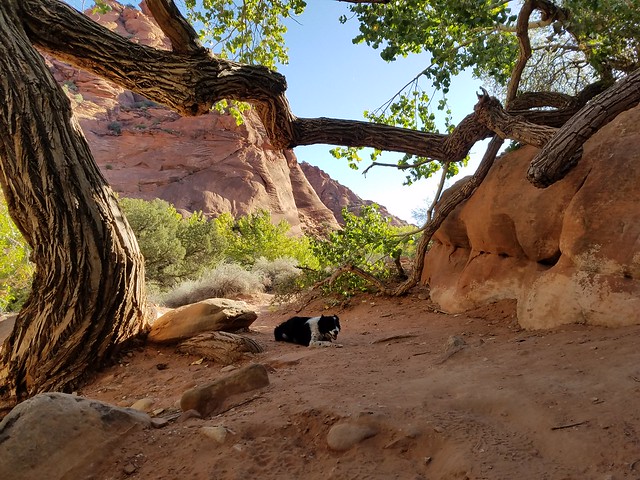 During the evening, waiting until it was late in the day, I headed up to Zion’s Kolob Canyons Visitor Center to see if I could get a permit for the Subway hike. I didn’t think it was likely but it never hurts to ask. I arrived 5 minutes before they closed and they were able to issue me a permit…another moment to be thankful for being a solo hiker/traveler. I took a quick drive through the park, past the canyons and the massive walls burning red in the dying sunlight. It was pretty impressive. 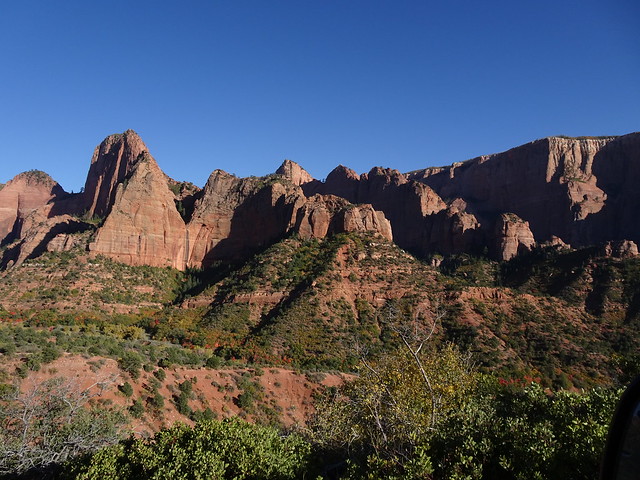