I forgot to change my clocks to Pacific time. With that in mind I looked at my alarm clock…it said 5:30am. It is not unusual for me to be up at that time due to work…however on Pacific time that is 4:30AM!!!

Well I was awake and had slept decently although suffering through some very strange dreams. Of course I didn’t realize just how early I had crawled out of bed until I was about to step out of the door and head to the Park for the sunrise…way too early. 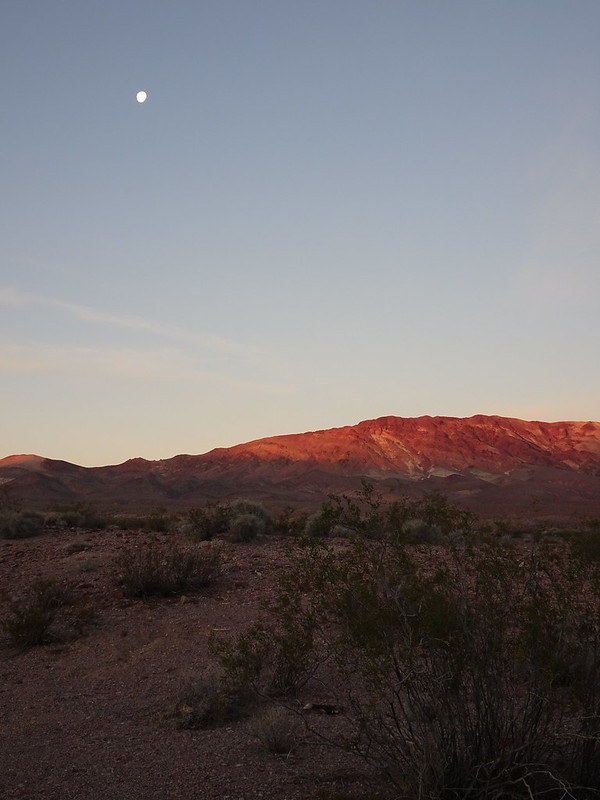 We left anyway and stopped at the information kiosk for a map and visitor’s guide. Dante’s View sounded like a great place from which to watch the sunrise…and I’m sure it would have been if it hadn’t been closed. I made it half way up before the road was closed due to construction. “Insert sad face here!!” I watched the sunrise anyway and got a couple of nice pictures of the multi-colored peaks in the dawn light, complete with the moon. I can only imagine how amazing it would have been to see the Super Blue Blood Moon here at the end of January. 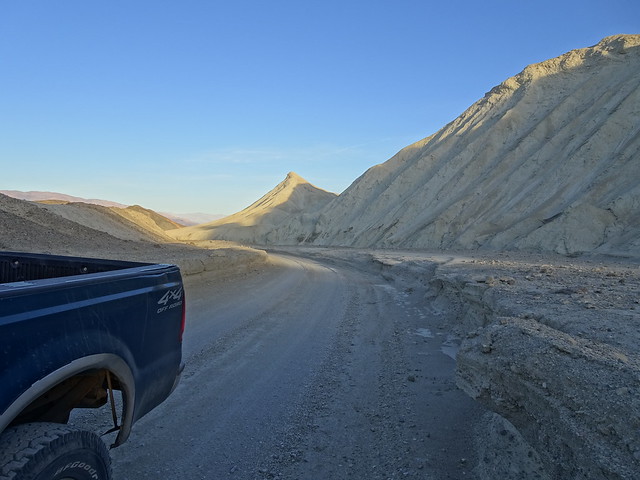 With the sun rising above the mountains and creating some great picture opportunities I headed towards Zabriskie Point. A brief detour took me through a one-way canyon called Twenty Mule Team Canyon…a windy and stunning moon-scape that took some ingenuity to build a road through. Of course something that amazing is always ruined by at least one person…for me it was the idiot driving the wrong way on a one-way, one-lane road. And of course, with me having the large truck, I was the one to have to maneuver around him because I had the capabilities…I made sure to let him know I was not impressed.

Zabriskie Point was a short walk up a steep paved path to a stunning view over the badlands. The early morning sun created some amazing texture and contrast for pictures between the peaks, ridges and valleys. 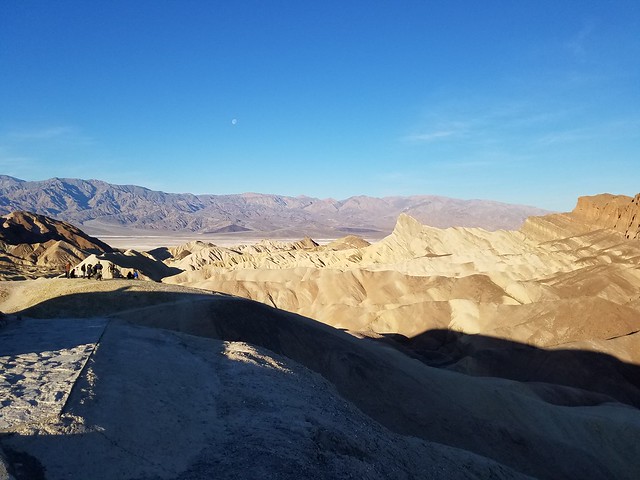 I had previously decided to take a loop route south from Furnace Creek and turned onto Badwater Road, a 72 mile route that ended at Shoshone. 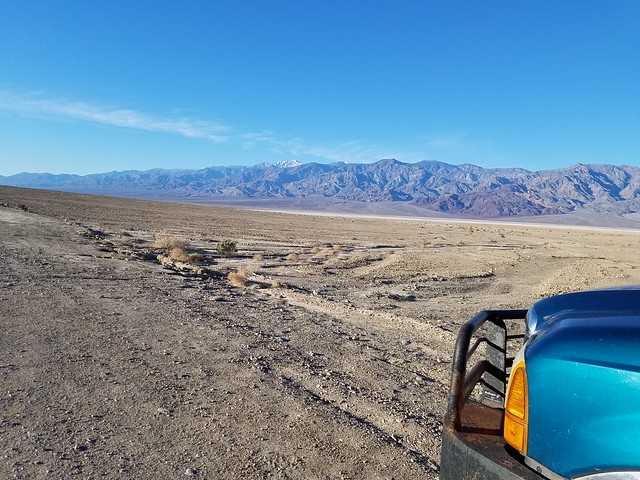 The first point of interest was Artists Drive, a 9 mile loop that carves up above the valley floor. It has a 25ft vehicle restriction…and they mean it. Artists Palette is the well-known highlight of the loop but I found the entire drive to be well worth the time, and I marveled at the route and construction of the road more than the scenery. Tight turns, steep dips and rises, and walls that risk your paint job mean that this road isn’t recommended for anything wider than a pick-up or van, and vehicles longer than 25ft are prohibited…and I can see why. 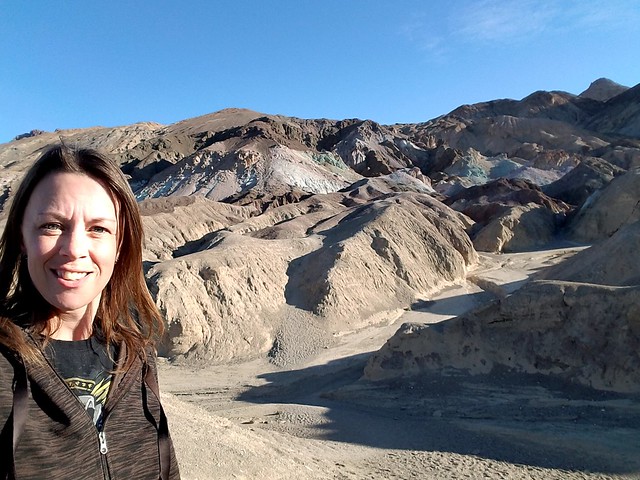 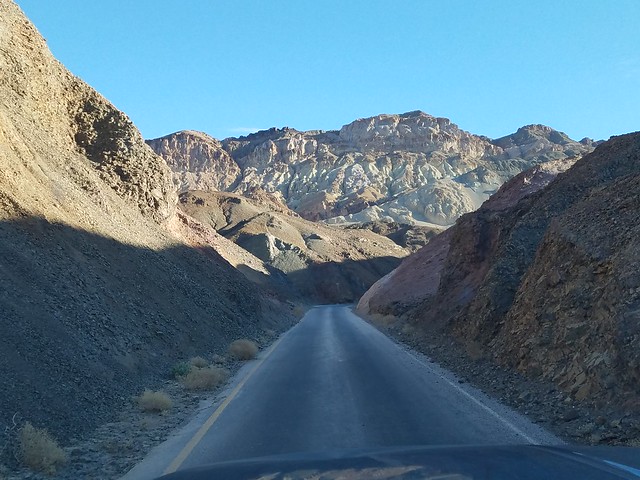 I wasn’t back on Badwater Road for long before I turned off again to the Devil’s Golf Course, a rough “field” of salt spires. Salt was initially deposited by thousands of years of floods and the spires were then shaped over the millennia by the erosion of wind and water. Care should be taken when walking in this area as the footing is treacherous and lacerations and broken bones are a real possibility. 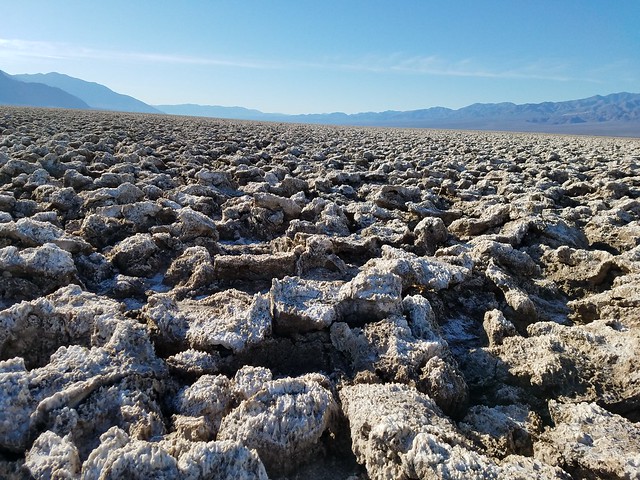 I paused briefly at Badwater, the lowest point in the western hemisphere at 282ft below sea level, before continuing south to Mormon Point and Ashford Mill. The Mill was owned by three brothers who used the mill to crush ore from a mine 5 miles to the east before sending it on to a smelter in another location. It was run by the brothers and lessors for a short time before finally closing.

Badwater; about a half mile out in the valley: 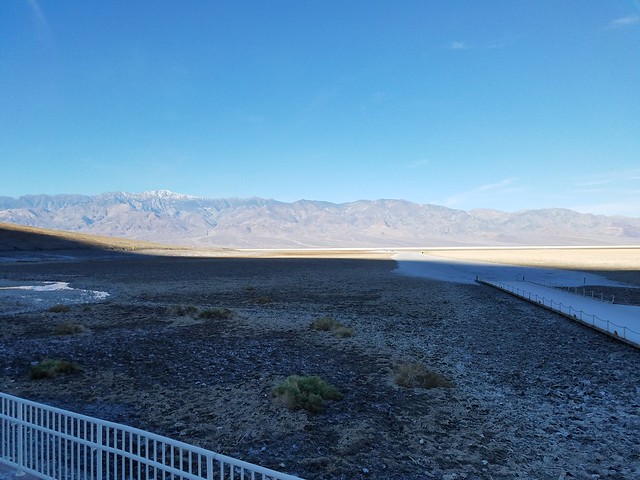 Can you see the tiny Sea Level sign on the cliff above my truck? 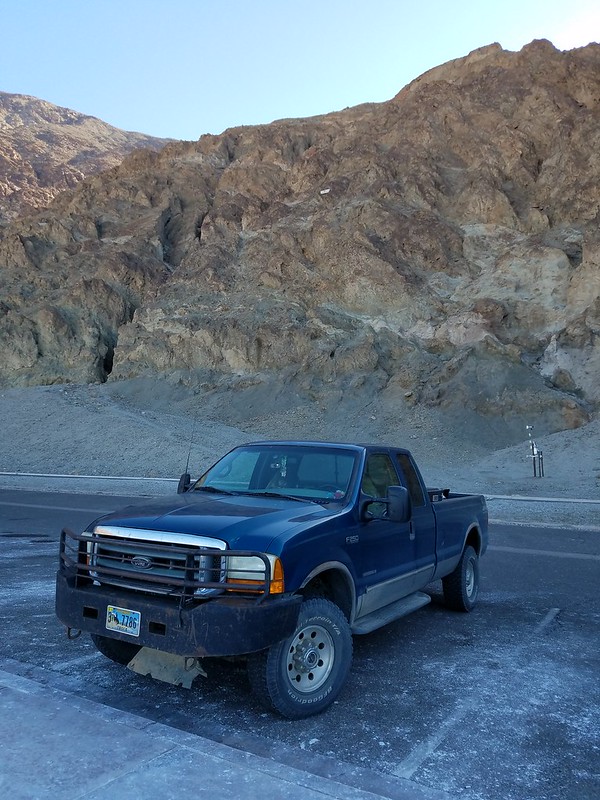 The highway then took my up and over Jubilee Pass which gave me a great view back over Death Valley from 1200ft. It then climbed another 2000ft to Salsberry Pass before dropping me back down and into the rinky-dink town of Shoshone where I had to sell a kidney on the black market for 15 gallons of diesel…I cringed at the $4.79/gallon cost. Cost of fuel…one of the many reasons I wanted to avoid California for my drive to Oregon.

Back at camp I took the dogs for a quick walk before settling in for a quiet afternoon and working on some pictures.