Day two in Death Valley started at the more reasonable time of 6:30am…although reasonable for me it may not be for others.

With the sun barely peeking above the eastern horizon I packed my lunch, loaded up the dogs and headed for the Park. The Visitor Center at Furnace Creek didn’t open until 8am and I filled the time with the Harmony Borax Works Interpretive Trail. 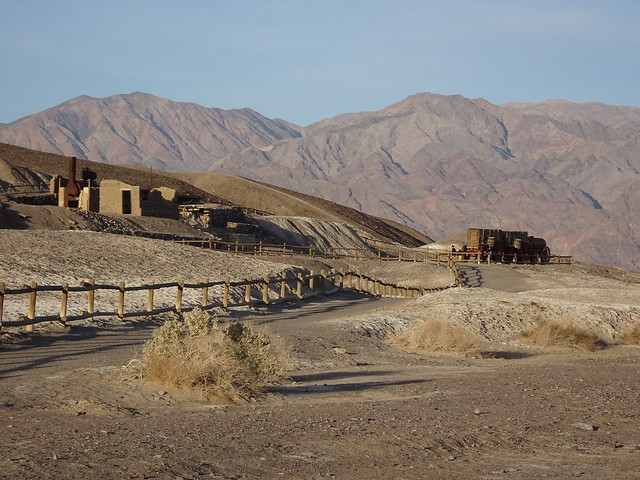 Despite many mining hopes and claims for gold in Death Valley the area’s most lucrative mineral was Borax, a salt mineral used by many professionals including blacksmiths, meat packers and housewives. Borax was mined and concentrated in a handful of places throughout the valley and then transported by twenty-mule teams 165 miles south to the railroad city of Mohave. It was due to the distance and the high costs of transportation that Borax was refined on site in Death Valley. To this day Twenty Mule Team Borax is a well-known and recognizable brand in many stores. 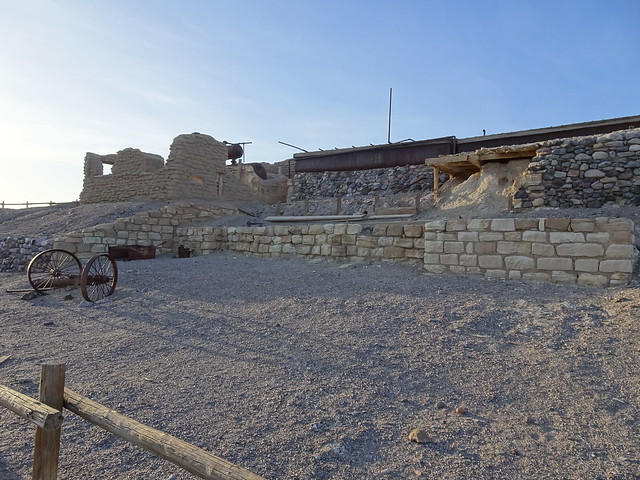 A quick stop at the visitor center to get a map for Golden Canyon and Gower Gulch, and to inquire about the road through Titus Canyon preceded my hike.

The parking lot for Golden Canyon was small and half full at 8:30am. As always I parked so the dogs had shade in the back of the truck and left them a bowl of water. With a liter of water and my cameras ready I headed up the canyon. 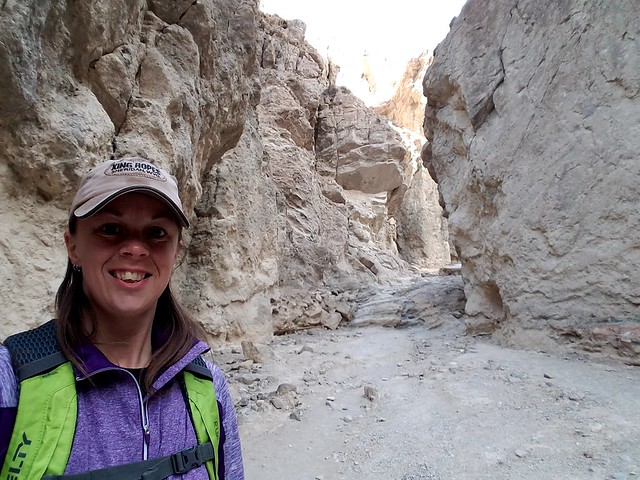 The first section was pretty and easy and I quickly passed a photographer who had set out before me. After the first mile the pathway splits and a half mile out-and-back trail leads to the Red Cathedral, a towering red rock formation that can be viewed while hiking up the canyon. I chose not to do the side trail and from the split the path climbed high into the badlands and was in sun exposure. Even at 9am in the morning, in February, the sun was hot and brutal and I quickly drained a third of my water.

The height of the trail peaks just beneath Manly Peak and then winds its way down through what looks like ancient sand dunes. I was starting to feel the effects of the heat already despite drinking plenty of water before I left and remaining hydrated while hiking. 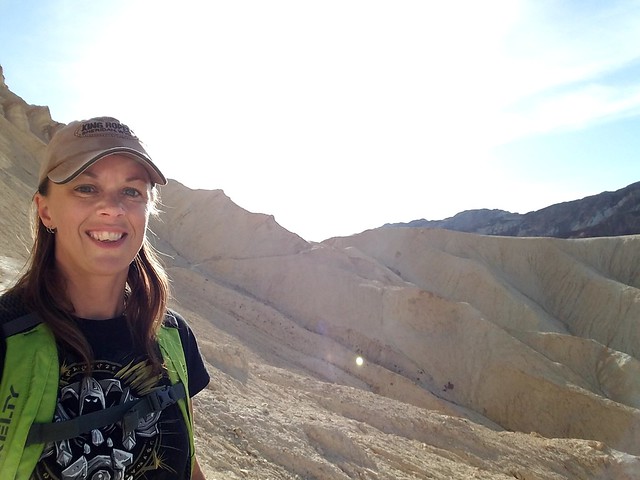 Thankfully the trail continued to go down and there was no more climbing. 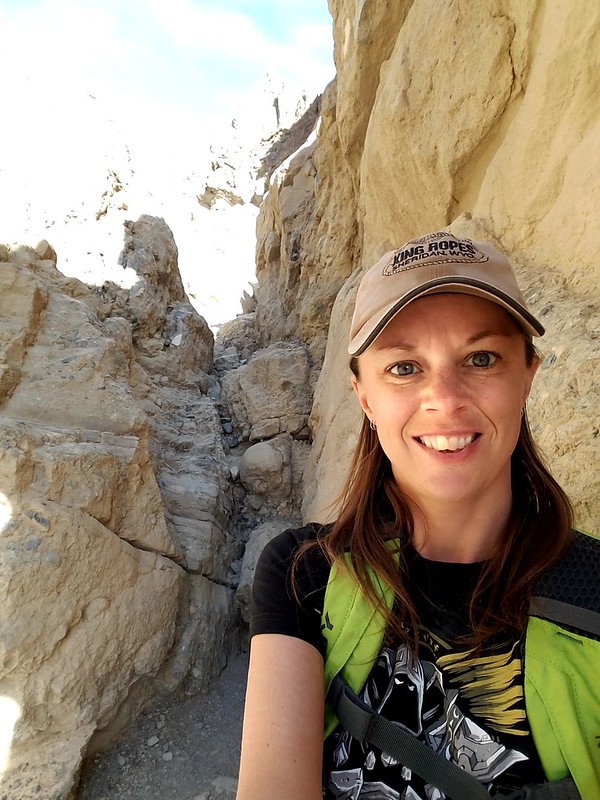 The trail flattened out and to the left was the turn-off for the Badlands Loop, another 0.8 miles I chose not to do. I was still feeling a little nauseous and weak when I remembered I hadn’t really eaten anything for breakfast (a serious oversight for me) and I paused in the shade of Gower Gulch’s towering cliff walls to eat my sandwich. I quickly began to feel better. 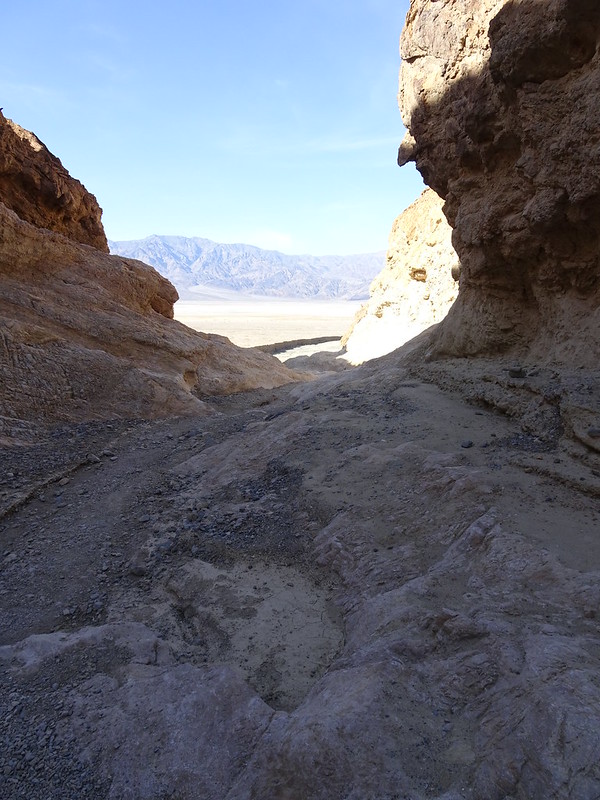 Gower Gulch started as a wide open wash for a half mile before narrowing between steep rock walls and jagged peaks. There was more shade and it was far more rugged than the first half of the trail, including a few rock scrambles down to the lower canyon. It was beautiful and the colors easily rivaled those of the Artists Palette I had seen the day before. 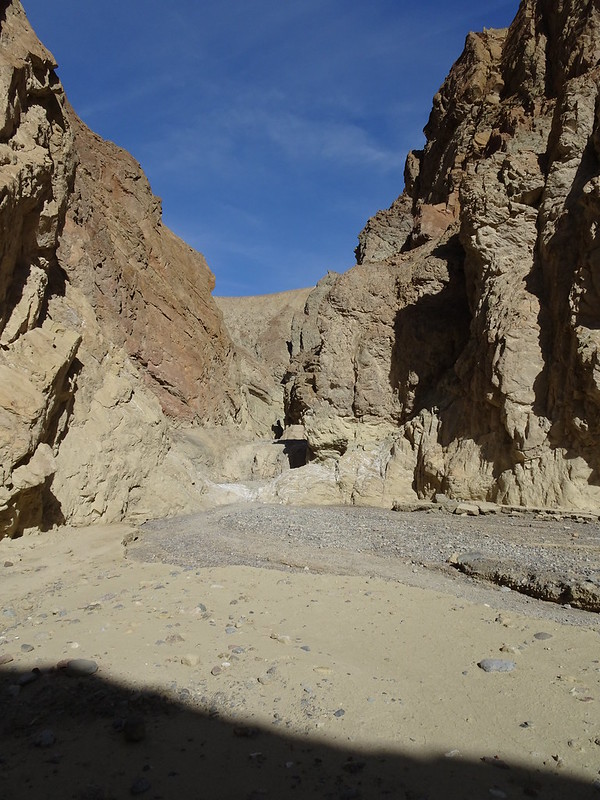 Ninety minutes after starting the hike I found myself escaping the canyon and looking down over a dry waterfall…I can only imagine how amazing it must have been with water flowing through the gulch. The trail led along the edge of the cliff face and above the sandy wash for another half mile before taking me back to the parking lot and my truck. 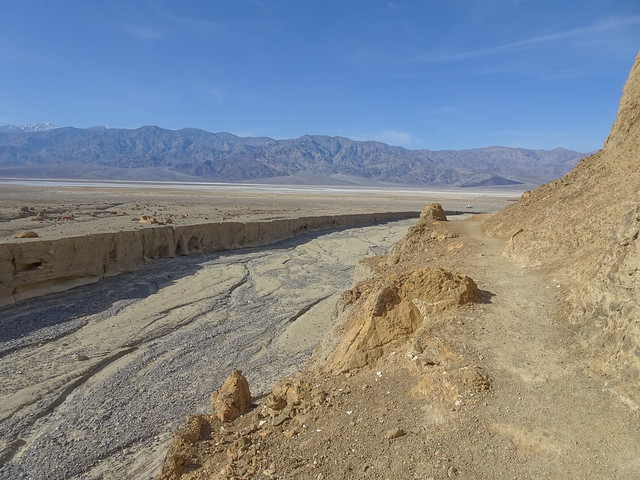 I quickly grabbed a cold diet Pepsi to cool my body temperature down and then let the dogs out for a brief potty break before heading back to the visitor center to peruse the museum.

The museum would be worth seeing prior to the hike (and really any excursion in the park), as well as the 30 minute movie, but I also don’t recommend starting to hike the Golden Canyon/Gower Gulch loop much later than I started, even in winter. I carried a liter of water and my lunch but I could have done with another half a liter of water. Shade is sparse but available in winter due to the lower angle of the sun…I wouldn’t recommend this hike in the height of summer unless done very early in the morning.