The day started at a more reasonable hour for a change but I was quickly dressed and out the door as I wanted to be ahead of whatever crowd Titus Canyon might draw, and to appreciate the drive in the early morning sun. Not to mention the joy of seeing two wild burros, a momma with last year’s foal, as I left camp.

The turn off for Titus Canyon was only a few miles from my RV on the main highway. Unfortunately the dirt road was nothing but washboards for four miles and the going was rough and slow. The National Park Service only recommends a high-clearance vehicle and not four wheel drive for this road.

After crossing the valley we started climbing into the foothills where the terrain was very reminiscent of Wyoming and I felt instantly at home. The gradual climb was the easy part as the road suddenly dived steeply down into another valley, complete with sharp twists and turns and harsh grades. It was fairly easy to navigate in low gear for my truck but I wouldn’t recommend attempting it anything much larger (even a dually may struggle). What amazed me the most was the huge variety of color in the rocks…something neither of my cameras could pick up very well…blues, greens, red, purple, yellow, black, white…every color of the rainbow. 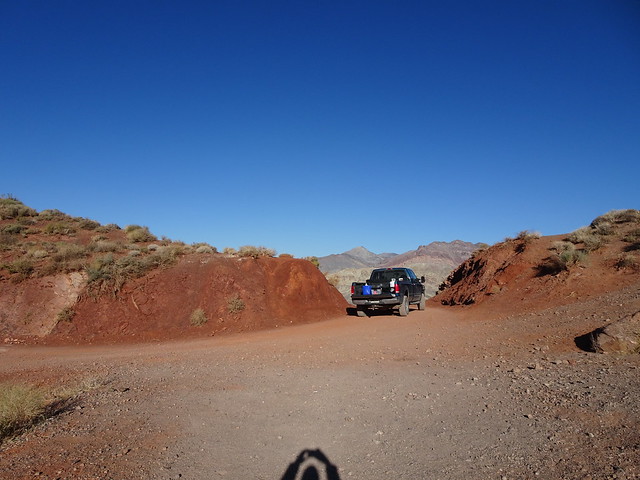 After dropping into the valley the road turned across the draw and started another steep climb to Red Pass. Another narrow road with another steep drop-off…but nowhere near as bad as the track that led down to the Colorado River from Canyonlands NP. On this road I felt safe, and of course knowing that it was one way traffic helped…I wasn’t going to run into someone coming the other way.

I paused briefly at Red Pass to assess the road, snap a few pictures and let the dogs take a break, especially since Cody hates bumpy, windy roads and tends to destroy anything left in the back of the truck. One or two of the remaining buildings of the ghost town of Leadville could be seen in the distance. 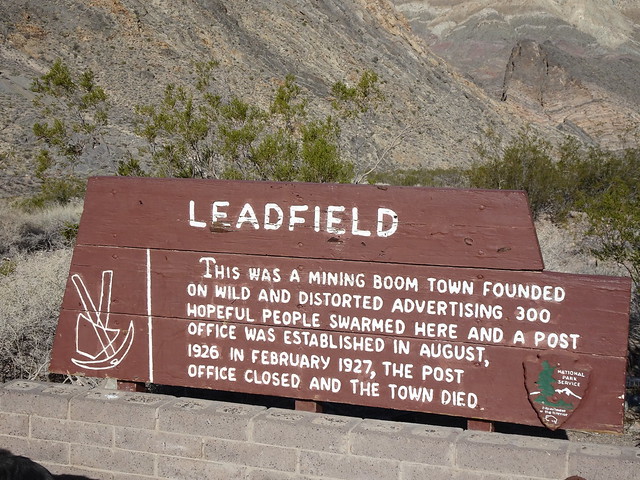 The road down from the pass was definitely a little more hairy than the drive up; it was narrower and steep cliffs threatened mirrors and paint work. At one point I was hugging the cliff so close I had barely two inches between my mirror and the wall of the cliff. The steep descent was short and we were soon in the valley and paused to take a look at the old mining town of Leadville. 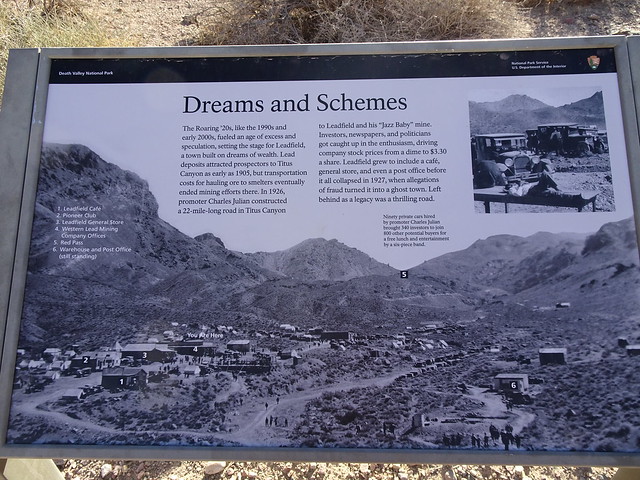 A jeep passed by as we were parked and headed down into the canyon. We followed a few minutes later and soon we were swallowed by the towering walls of Titus Canyon. The road followed a wide wash and we were hemmed in by massive slabs of sandstone and granite. It made me feel extremely small. 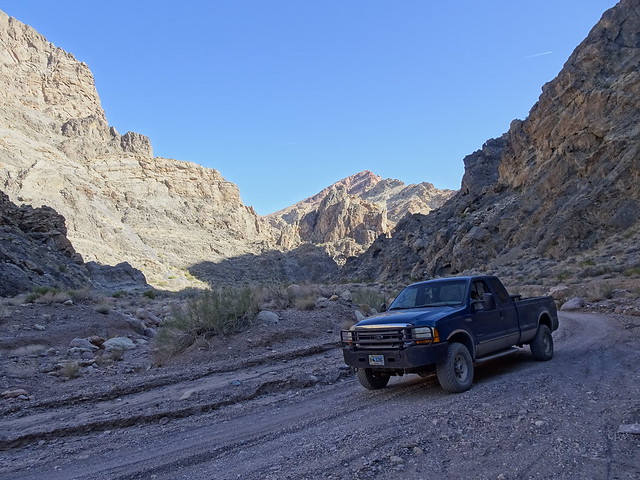 The road remained good and confirmed what the ranger had told me…it was the best he had ever seen it. If it hadn’t had been for an occasional large rock in the path with a large drop or a couple of large holes it would almost have been suitable for a high-sitting car.

The wash widened slightly and yellow grass covered some of the slopes. I really started looking for big horn sheep but wasn’t having much luck, despite knowing what I was looking for. My stomach was growling and I found a place to pull over to eat lunch. I let the dogs out and grabbed my cooler, and that was when I heard the skitter of loose rocks down the wall of the canyon. Expecting to see a rock slide I saw nothing, but then caught the flash of movement of two big horn sheep traversing the scree and knocking rocks loose. 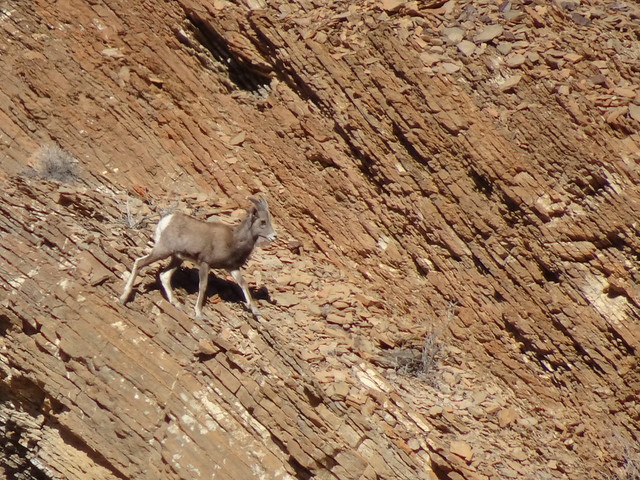 I watched the sheep for a while and took some pictures…easier said than done since the sun was almost too bright to see the LCD screen of my camera. I enjoyed watching them for a while as I ate my lunch. I was still watching them as another vehicle passed by; I was staring up at the mountain and I’m surprised they didn’t stop to see what I was looking at…but I didn’t have my camera out. 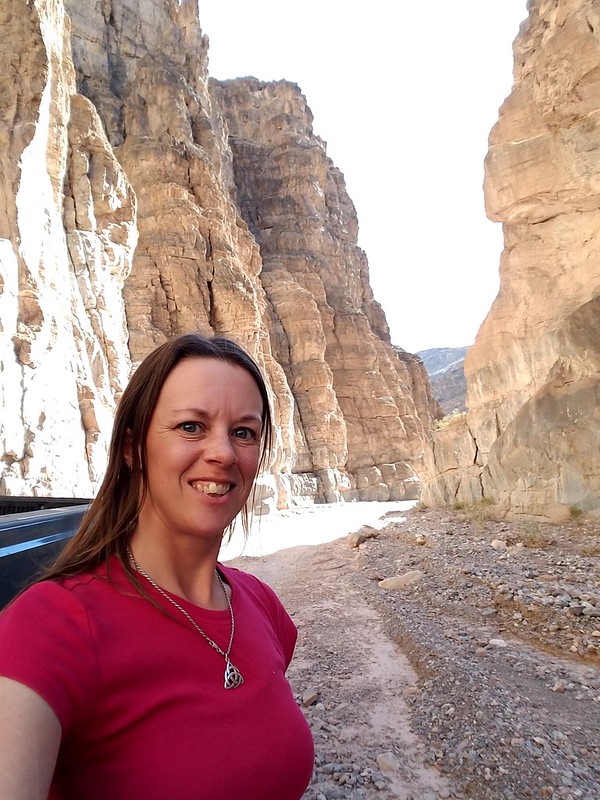 With a full belly and with the dogs having had their fill of water we continued down the canyon and into the narrows/slot canyon section. I can honestly say that I have rarely felt so amazed by a road (hiking trails, yes, but not roads) and I felt dwarfed by the narrow path that led me between sheer rock walls. I stopped so many times to take pictures that I lost count…but of course the pictures really don’t do justice to how it looks and feels. 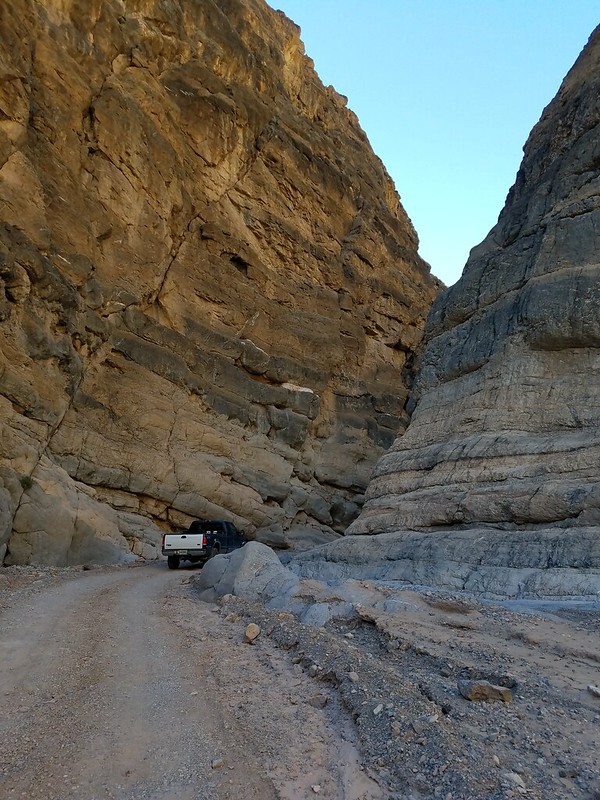 Four more miles of windy canyon paths and following the gravel wash finally dumped me out in the parking lot of Fall Canyon trail head. In hindsight I am glad that the one way road ends where it does…the slot canyons are absolutely stunning and a great finale to an incredible drive.

A quick stop at Stovepipe Wells Ranger Station to report the sheep sighting (something they request you do if you see any) and I headed home.

Titus Canyon Road is a 27 mile gravel track limited to one way travel from the east to the west and the access point is well sign-posted about 6 miles from Beatty, NV on the way into Death Valley National Park. A 2WD high-clearance vehicle is required due to infrequent rocks and a number of wash-outs in the road but with gravity on your side there is generally no need for 4WD. Experience driving on narrow canyon dirt roads would be beneficial but certainly not necessary. If you don’t have a suitable vehicle for this drive I highly recommend renting a jeep for half a day and taking your time…I rarely got out of 1st gear as I wanted to soak it all in. This trip was the highlight of Death Valley for me and something I would put on the must-do list if you are visiting the park.