The one day I wanted to be up early was the one morning my alarm went off before I got up and I wanted to stay in bed. It was 5:30am and it was my aim to be at the Mesquite Flats Sand Dunes for the sunrise.

I dragged myself out of my warm and comfortable bed, let the dogs out and made lunch while eating breakfast. I loaded the cooler and we headed for the truck, the early morning sun just barely turning the eastern horizon cerulean. 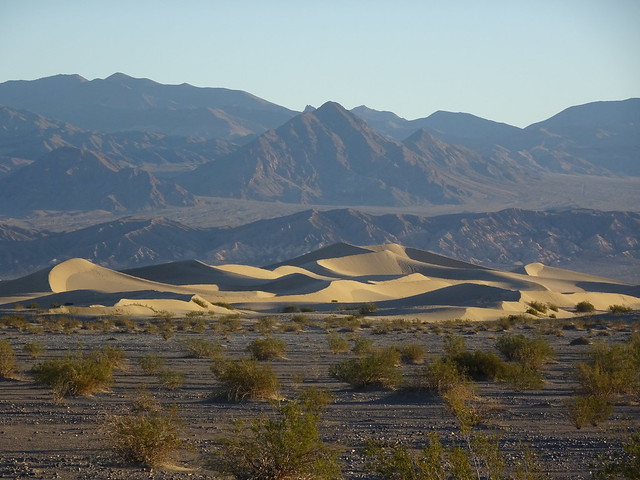 Once again we crossed Daylight Pass into the park and paused at a parking area at the junction of 190 and 374 to watch the first rays of light hit the mountain peaks and the sand dunes. It was worth the early rise and braving the chilly morning to get some good pictures. The sand dunes look very out of place when seen in the grand vista of the basin and are only found in two places in the park; Mesquite Flats, and Eureka in the north (a lot tougher to get to). The only reason for the sand dunes in these places is due to the geographical locations and climate anomalies these places share. 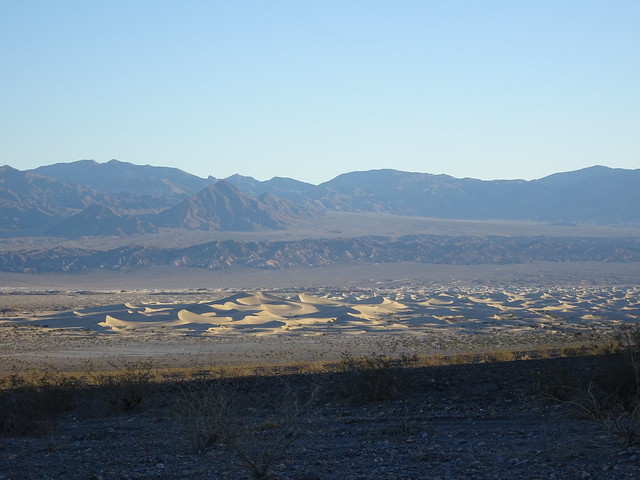 From Mesquite Flats we drove through Stovepipe Wells Village and turned onto a dirt road that took us 2.2 miles to the base of Mosaic Canyon. I was the first one there for the morning and quickly got myself and the dogs situated.

If you know me at all by now you know I like to make things difficult for myself and without much guidance, except a very poorly-diagrammed map in the parking lot, I wasn’t completely sure which way to go. Two tracks led away from the parking area and having seen the one that traversed the hillside, and knowing that the elevation gain was 1200ft, I hiked up the steep side of the mountain. Now the view from the top was incredible but it certainly wasn’t easy. 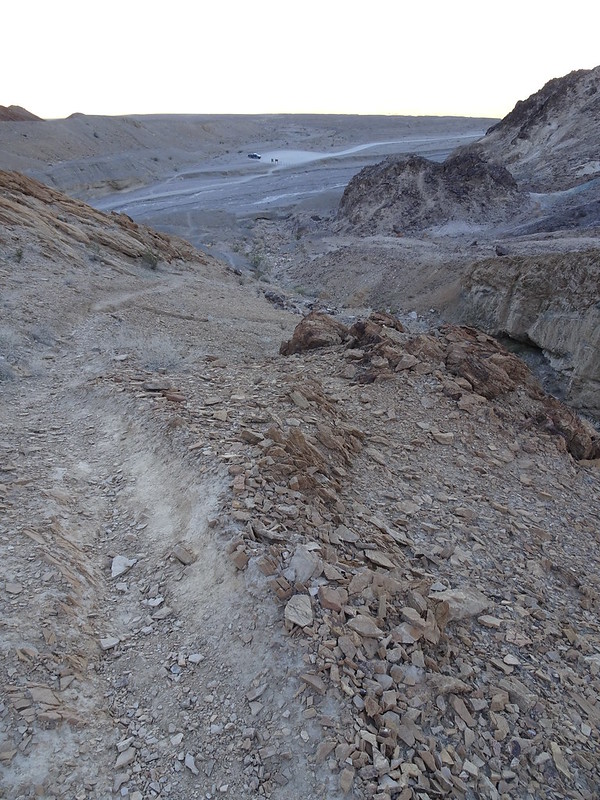 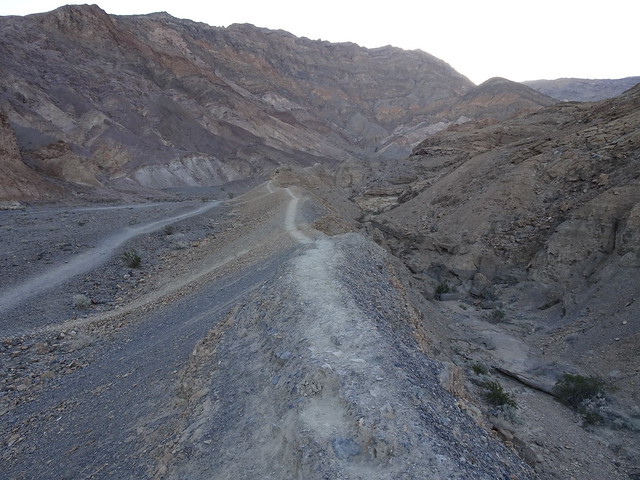 From the top I looked down into the wash of the canyon and carefully made my way along treacherous, scree-clad paths to the safety of the flat, gravel wash. I was once again surrounded by copper-colored majestic peaks although a myriad of colors could be seen complimenting the common copper and yellow tones.

I hiked up the flat wash and made detours to check out other narrow canyons and washes that flowed into, out of, or parallel to the main thoroughfare. 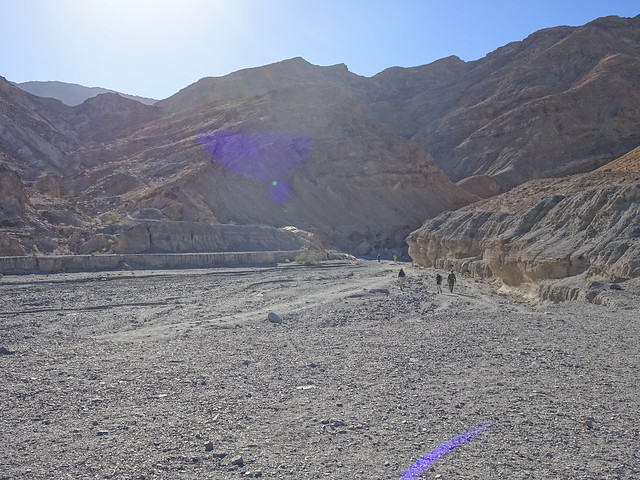 After about a mile the canyon started to narrow and some rock scrambling was required. I was excessively careful as I still didn’t have the strength or dexterity in my right hand to grip rocks or save myself from slipping if I needed to. I am always careful when on my own (even when carrying my GPS SOS device). 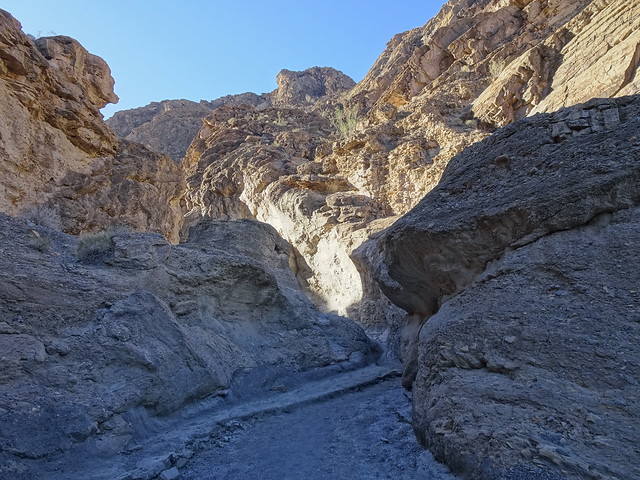 Slot canyons made up the last 1/4 mile of hiking and there were certainly some tough places to get through, despite my being constantly careful. The trail finally ended at a 30ft rock wall although a trail (50ft earlier in the canyon) seemed to continue further up if one was inclined to climb more. 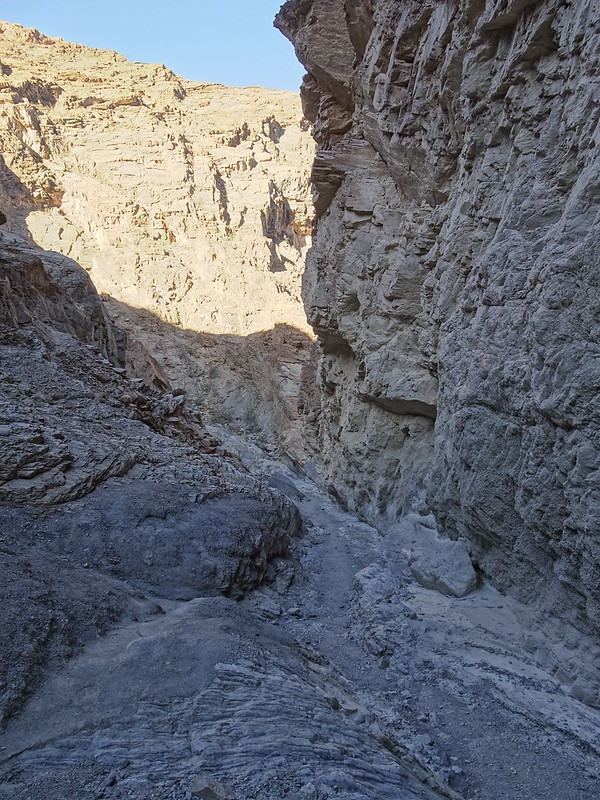 I paused for a bite to eat as I was once again feeling shaky after the 1200ft of climbing and needed an energy boost. I also made sure to stay hydrated.

With my belly full and feeling a little more energized I headed back down the canyon, surprised to not have run into the couple that had pulled into the parking lot less than 15 minutes after I had left. I had the canyon all to myself and I continued to take some beautiful pictures as the sun provided some really amazing lighting.

Upon reaching the trail I had followed down earlier I decided to check out the lower canyon, thinking it would be blocked by a massive boulder that was could not be traversed…and hence the reason for the up-and-over trail. But, NO! This was the actual Mosaic Canyon trail and it was much easier than the route I had taken. Oh well…saved the best for last and was pleasantly surprised and got the best of both worlds….views and the narrows. 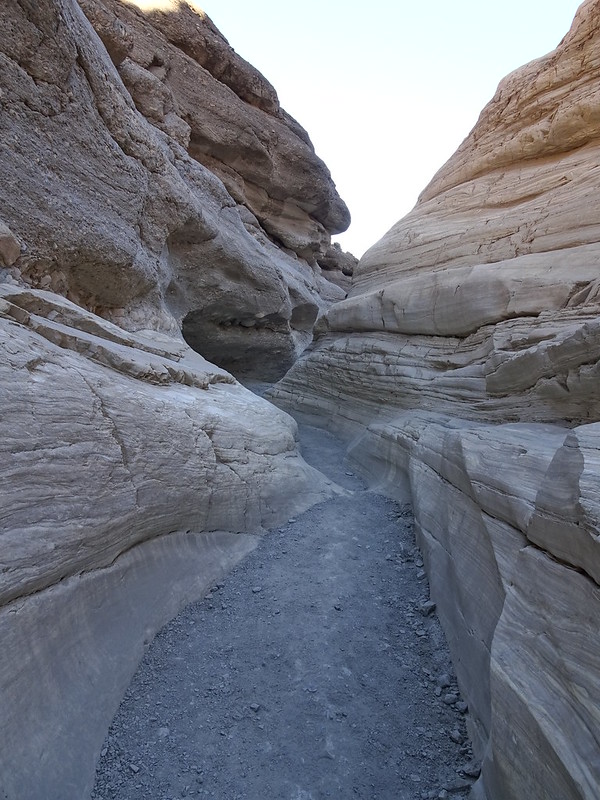 One side of the narrows was smoothed white marble while the other was a compact mixture of pebbles such as you see on pebble-dashed houses…and hence the name Mosaic Canyon. The whole thing was beautiful and I’m actually glad I made the mistake in taking the upper trail so to be surprised on the way back…I’d actually recommend it. 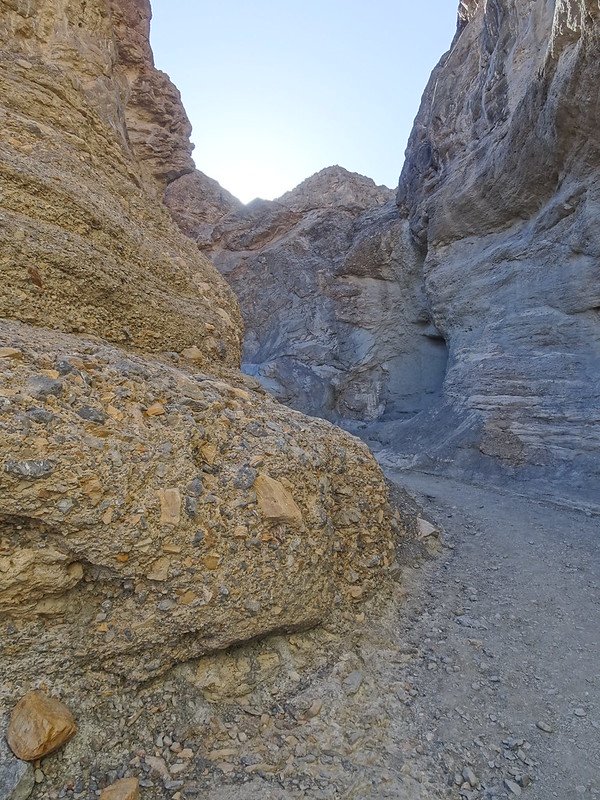 From Mosaic Canyon we took a short drive to the top of the pass into Panamint Valley where I had thought we might hike Darwin Falls. I, however, made the mistake in thinking it was a 6 mile hike (I’d looked at the wrong hike on the visitor guide)  instead of the 2 miles it actually was…something I now regret not double-checking…and I made the decision not to continue on to the trail head and save on fuel.

We paused at the Devil’s Cornfield, a salt flat near to the sand dunes that is home to strange corn-sheave-shaped plants. These are caused by the roots of the plants forming a solid base that resists erosion from water and wind as the dirt and other sediment is washed or blown away around it. 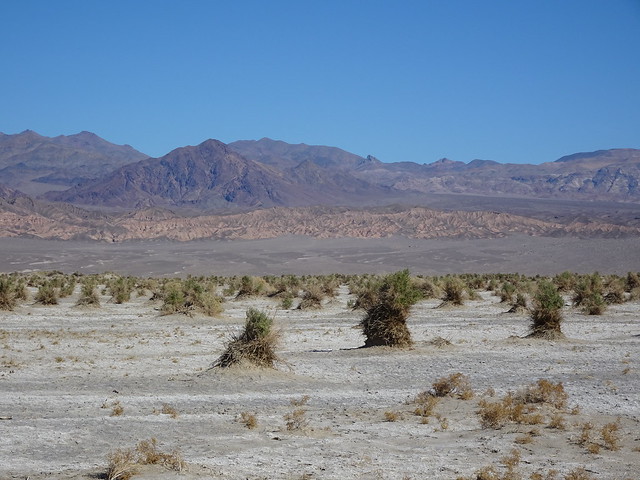 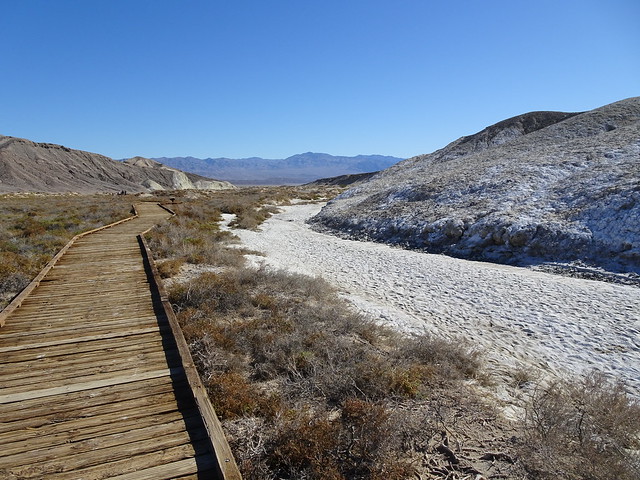 So with my mistake not quite computing yet I drove to Salt Creek and took a short 1/2 mile hike on the interpretive boardwalk trail. It is times like these that people REALLY PISS ME OFF when you see the remnants of the actions of people who think the rules don’t apply to them. Salt Creek is a very fragile and delicate habitat and stepping off the board-walk is prohibited to protect it…but everywhere you look people have left footprints in the salt marsh and mar the landscape…there were even tiny kid’s footprints with adult prints which tells me that parents are teaching their children that its okay to break the rules. It makes me so mad! 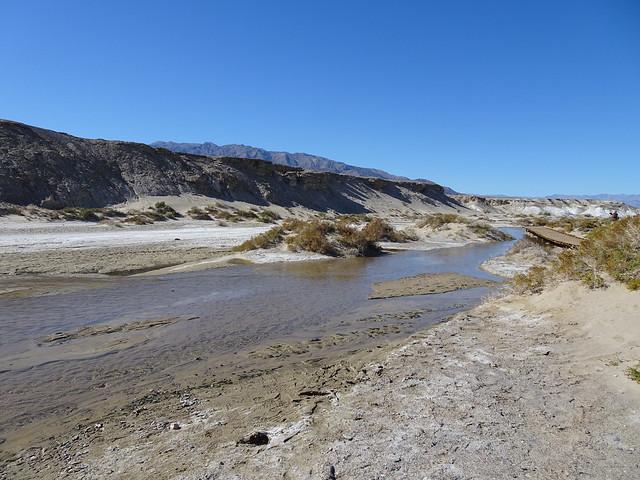 Salt Creek is the only home of the very rare Salt Creek Pupfish.

Thousands and thousands of years ago Death Valley was the home of Manly Lake. When the climate changed and became drier the water from the mountains needed to sustain the lake disappeared. As the lake dried up pockets of pupfish remained in various locations, all now different and distinct species from one another despite all descending from the same ancestors. 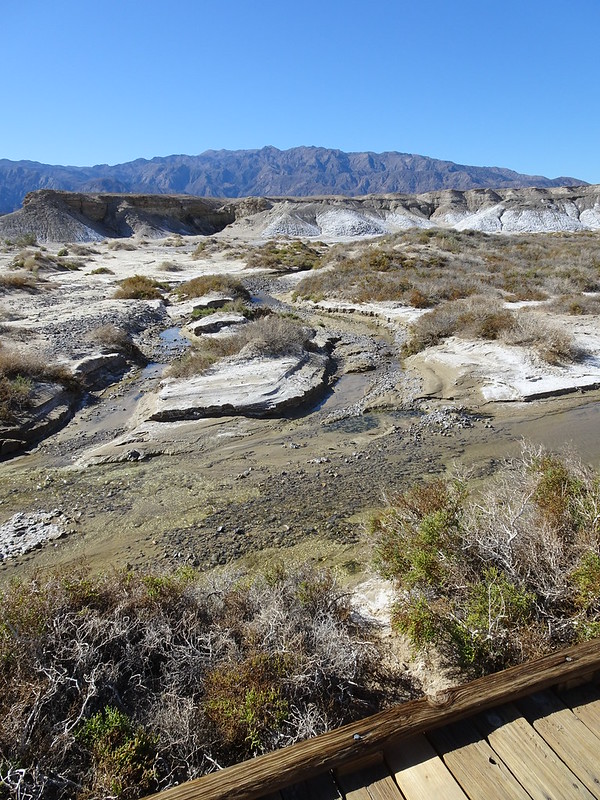 Salt Creek Pupfish have a pretty tough life, having a one year life-span on average, and they rely on small pockets of water from a small spring to remain consistent throughout the summer. They retreat to these pockets during the heat of the 120*+ summers when the rest of the creek dries up. The Salt Creek pupfish have adapted to living in water that is often many times more saline than sea water, and unlike many salt-water fish they actually have to drink water or they get dehydrated. There are around a dozen different species of pupfish in the deserts of California and Nevada that can all trace their ancestry back to the same locations. 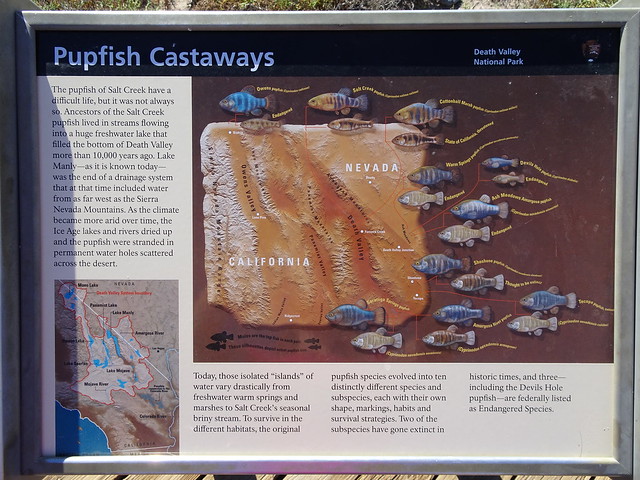 Winter and spring are a good time to see the creek at its best and to see the rare pupfish that live in its waters.

After having learned about this unique and intriguing habitat I headed home to get fuel without the trailer in tow and get ready to depart Death Valley.