Mail always seems to take forever to show up when you are waiting on something specific, in this case a new day pack. It was something I needed to take with me.

Now that the RV and most of my belongings had been sold it was just back to the dogs and me in the truck on the road and we headed out on a beautiful Monday afternoon. I bid my friends farewell and headed south from the Mt. Rainier area towards Portland. A quick stop at the bank and to grab a salad for lunch from Safeway was all the break I took on the way to Astoria, Oregon. Scenic views and port river bridges provided the background to the country music on the radio I listened to as I drove. 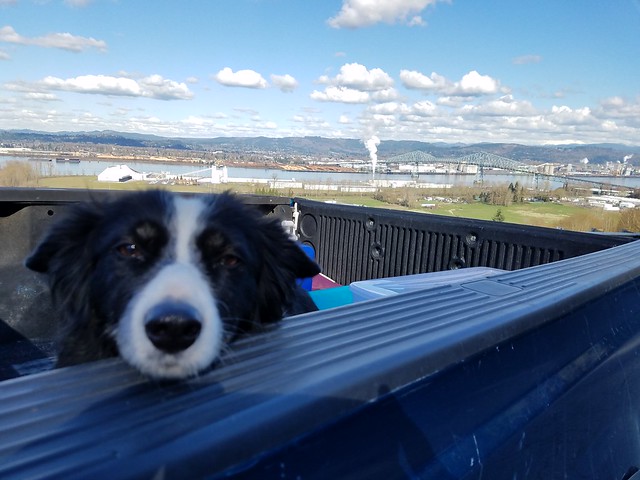 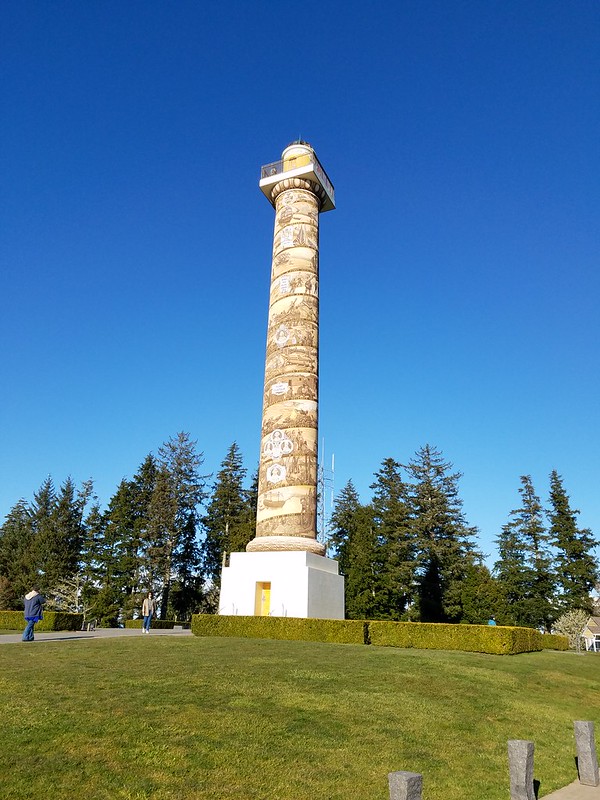 When I reached Astoria a sign pointed me to the Astoria Column and I thought “why not?” and drove up some crazy-steep hills and followed roads that weren’t well sign-posted (sound familiar?) to finally find the column and the 30 acre city park. There was an entry fee that I didn’t think was worth paying just to look at a carved column and the view so the attendant permitted me to drive in to turn around.

I shot a few pictures of the column which was built in 1926 with financing by the Great Northern Railway and Vincent Astor, the great-grandson of John Jacob Astor, in commemoration of the city’s role in the family’s business history. Patterned after the Trajan Column in Rome (and Place Vendôme Column in Paris), the Astoria Column was dedicated on July 22, 1926. In 1974, the column was listed in the National Register of Historic Places. 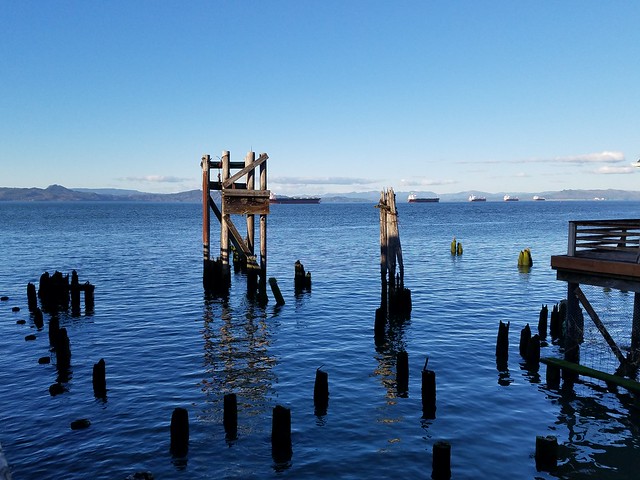 After checking out the tower I parked along the main road and headed to the local brew pup for a pint of the local ale which was a pretty decent IPA although slightly too citrusy for me; I could have drank another but decided it was time to move on. I wandered downtown briefly but saw little of interest and then followed the river back to the truck, pausing to take a couple of pictures of yet another dreaded bridge that would be taking me back into Washington and the massive ships on the river. 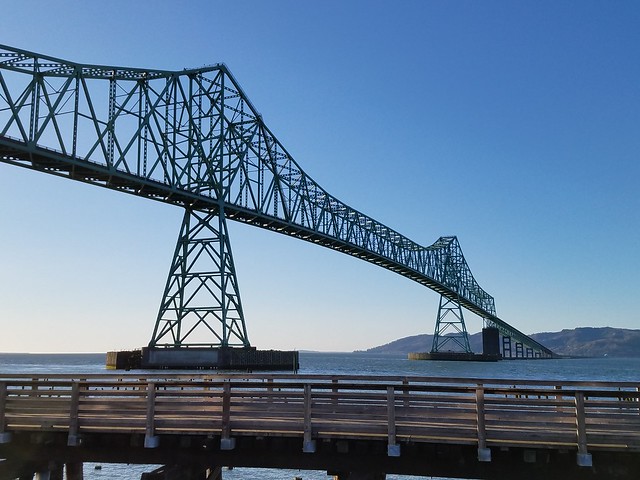 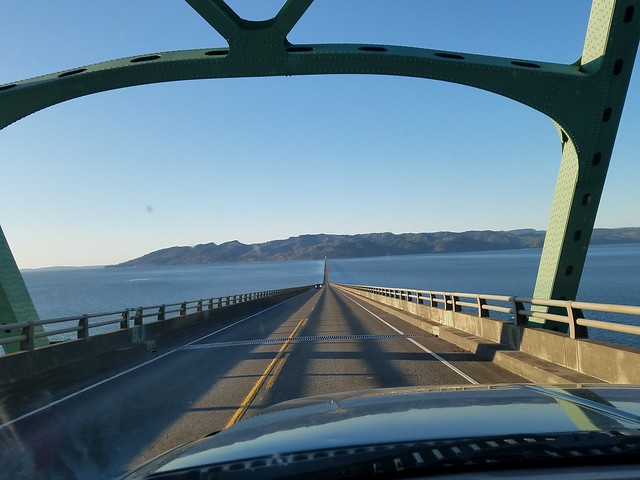 The rest area we spent the night was not ideal but it was a safe place to park. I got some sleep but it wasn’t the greatest…too much traffic and we were parked on an angle. As soon as it was reasonably light I was packing up and driving again. The fog made for some dreary driving but it made for a pretty amazing sunrise over the river. 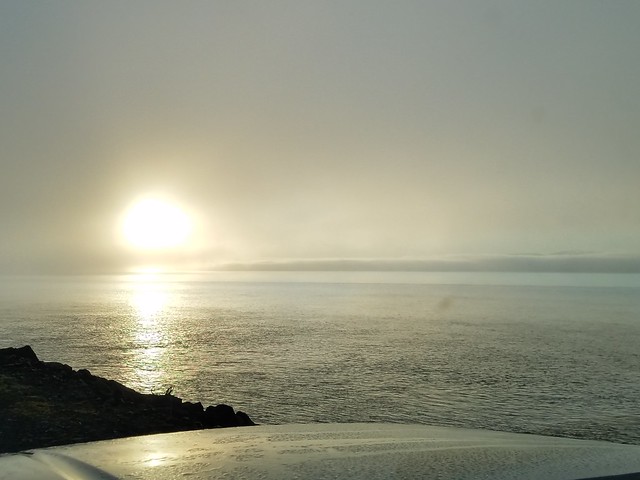 The clouds finally lifted near South Bend and it was nice to pause to allow the dogs to run for a while. Even the cobwebs on the trees looked amazing in the sun. 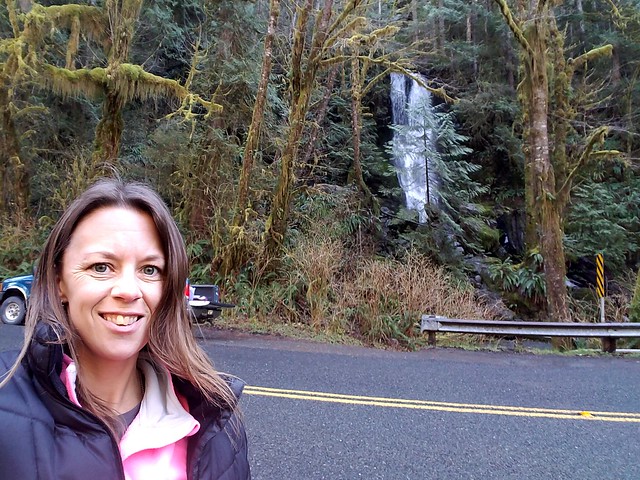 I hadn’t planned on driving so much but there was little to do with the colder weather, and there were few to no camping locations along the coast…at least no free ones. I continued to drive north, taking a break at one of the beaches with the dogs…their first time to experience the waves of the ocean. I kept them back from the surf as the waves were pretty hefty and I didn’t want them to get dragged in. I let them run for a while and pose for pictures on some driftwood before heading back to the truck. 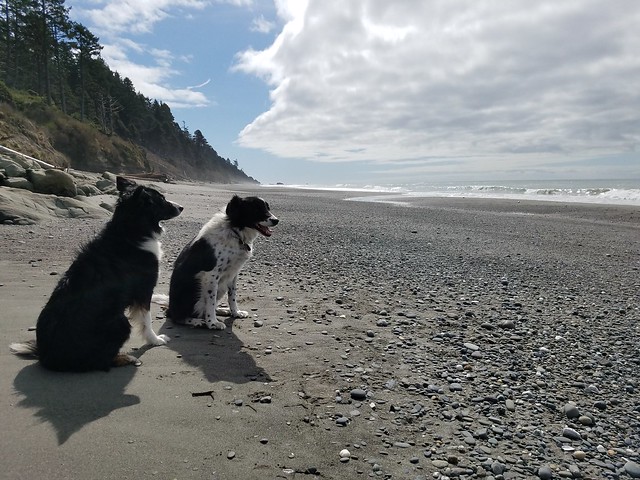 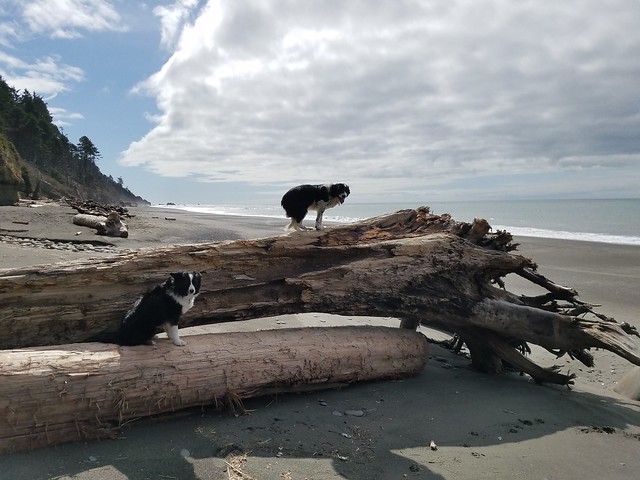 A quick detour through the Hoh Rainforest in Olympic National Park was gorgeous but the trails didn’t feel particularly inspiring and I just played with the dogs in the picnic area. The highlight was the herd of elk along the highway that were happy to pose for a couple of close-up pictures. 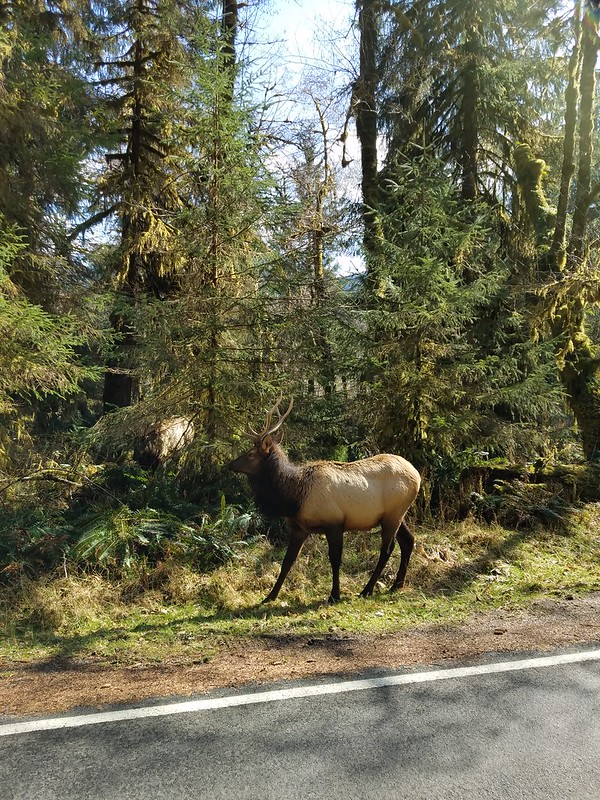 From the Hoh we headed to Forks (home of the dreaded “sparkly” vampires of Twilight) where I grabbed a bite to eat and drink beer before heading to a campsite near Beaver Lake. It was a wonderful quiet night even if it was chilly and I slept well. 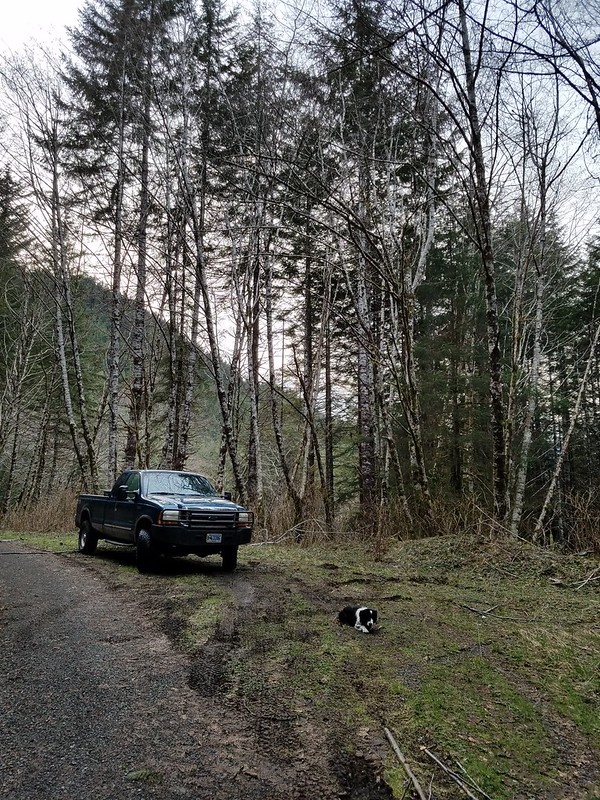 I was up later in the morning and had slept better than the night before, but we were still back on the road by 8am.

We passed the beautiful blue Crescent Lake and found ourselves in Port Angeles much earlier than expected. I found the ferry terminal and the lady recommended I book my ticket online as it was cheaper so I headed back to the truck and booked my ticket for Friday morning. 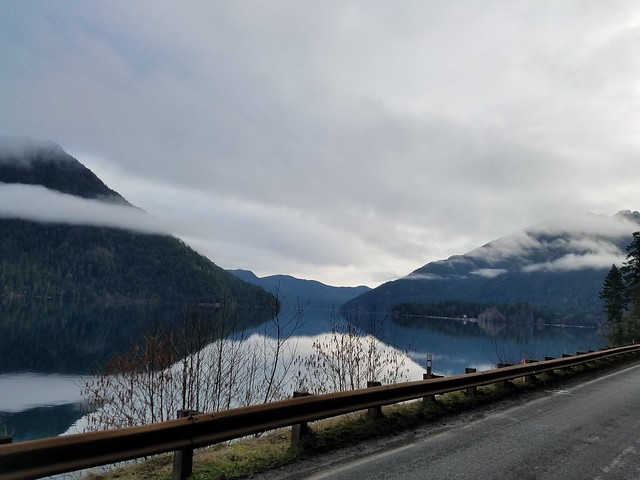 I spent the rest of the day exploring the local area and visited the Dungeness National Wildlife Refuge where you could look down from the bluffs to the sandy beaches. I didn’t make the hike along the sand spit to the lighthouse but I did make the drive to the town of Dungeness and saw the lighthouse from a beach there. We also headed to Port Townsend and then to Ironwood County Beach Park where we took a long walk on the beach…it was a great time for the dogs and they could get out and stretch their legs after being mostly stuck in the truck for the better part of three days. 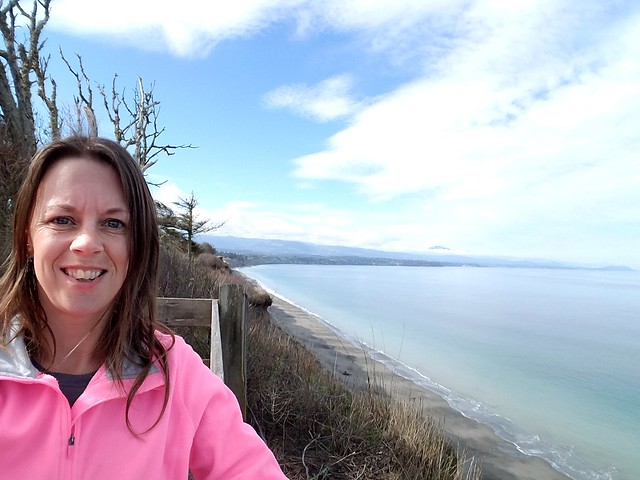 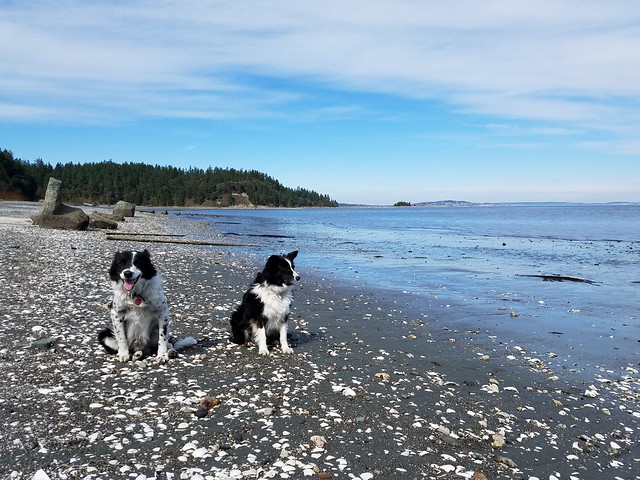 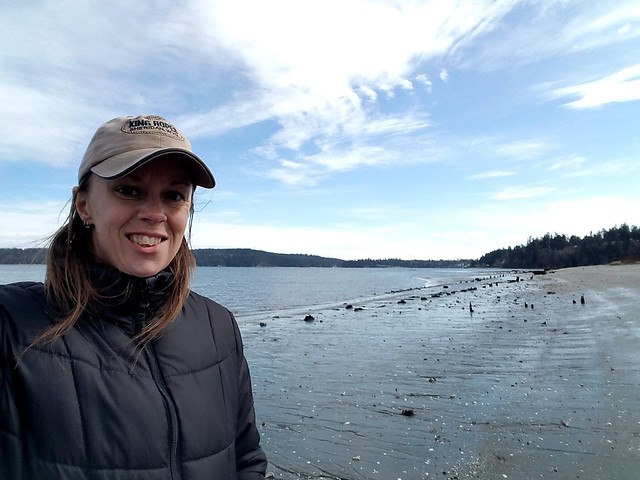 I ate a terrible BLT in Sequim before heading to the best campsite yet above Blyn. Rain threatened so we hunkered down in the truck for a while as it sprinkled a few rain drops on the roof as we listened to the radio.

The morning dawned chilled and damp as we packed up and headed back down the rough dirt road and headed for Port Angeles. I checked in with the attendants early and then went in search of a mail box to mail my sister’s birthday card while I was still in the US. It was definitely chilly and a guy almost ran us over as we crossed a street, honky and yelling at me despite the fact that I was in a crosswalk and had the right of way. Some people are just jerks.

Soon it was time to head back to the truck and get ready to take the dogs on their first boat ride. 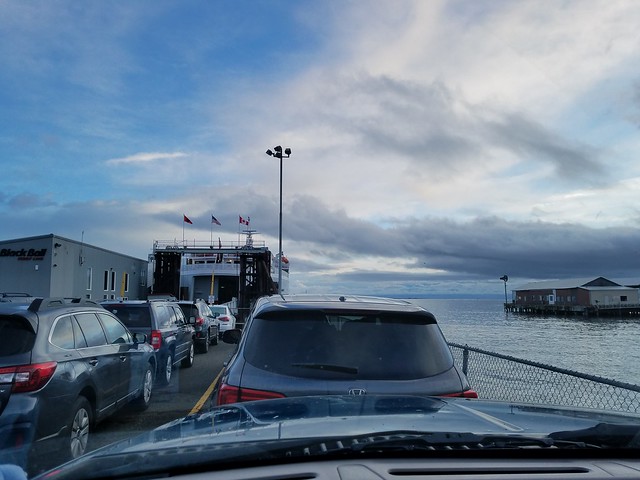