Poor Cody struggled with the ferry ride from Port Angeles to Victoria. The water was rough and there was a lot of movement in the boat that Cody didn’t understand. He was allowed in the passenger compartment above the vehicle deck so he could stay with me but he was constantly up and down and very stressed. There was little I could do for him. Kye, on the other hand, did just fine and slept most of the way. 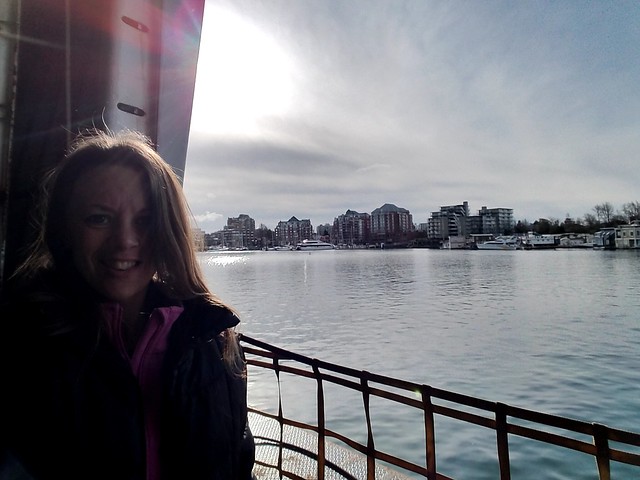 Customs and immigration in Victoria was the toughest I’ve been through and apparently my answers didn’t inspire confidence in the Canadian Border Agents as I was told to pull aside and wait. Eventually I was asked more questions. Without a fixed address and permanent job in the US apparently I come across as a possible illegal immigrant (2-3 weeks planned in Canada without permanent ties to the US other than a passport and 90% of my belongings still in Washington). The border agent was perfectly nice and just doing her job and after a quick search and a few more questions we were permitted to go.

I let the dogs run free at one of the many off-leash dog parks along the coast and then headed inland a way to see the city. I parked the truck in one of the free parking garages in Victoria and left the dogs to sleep. Sometimes I wish I had a van for roadtrips but when it is hot out the truck is better for the dogs as they have shade under the toolbox. The only spaces were on the fifth level and it certainly took some maneuvering to get around some of the tighter turnings to get there with such a large truck and my vertical height was pushing the limit…I kept ducking involuntarily when the beams got close. I wandered downtown and the harbor area and eventually stopped at what looked like a very British pub for lunch…sadly it wasn’t as English as it looked and certainly didn’t list any kind of English/ Irish/ Scottish food on the menu. 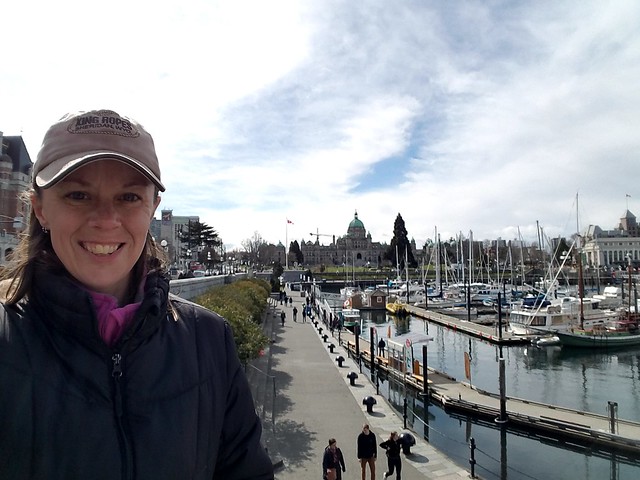 With the weather looking pretty unpleasant I decided to make the longer journey north to Black Creek rather than wait it out in a local Provincial Park. The three hours north on the Inland Island Highway was fairly unpleasant due to the constant rain and dark clouds. I stopped briefly at Cabela’s for a short break and debated staying but was completely over the constant rain and continued on.

An old friend of mine from the UK had put me in touch with a friend of hers on Vancouver Island and it was to their place I was heading. I arrived just as dark was settling and I drove past the place once. The house still had lights on and I had been told to “head on in” when I arrived…which I did. It was chilly but very homey and I quickly got a fire going in the wood stove to drive out the damp chill.

The house was wonderful and reminded me of several places in the UK, and my host was a great collector of fabulous clocks. I made myself at home and drank a couple of local beers…something I enjoyed very much after a stressful drive. The dogs made themselves quite at home with the massive dog bed in the living room. 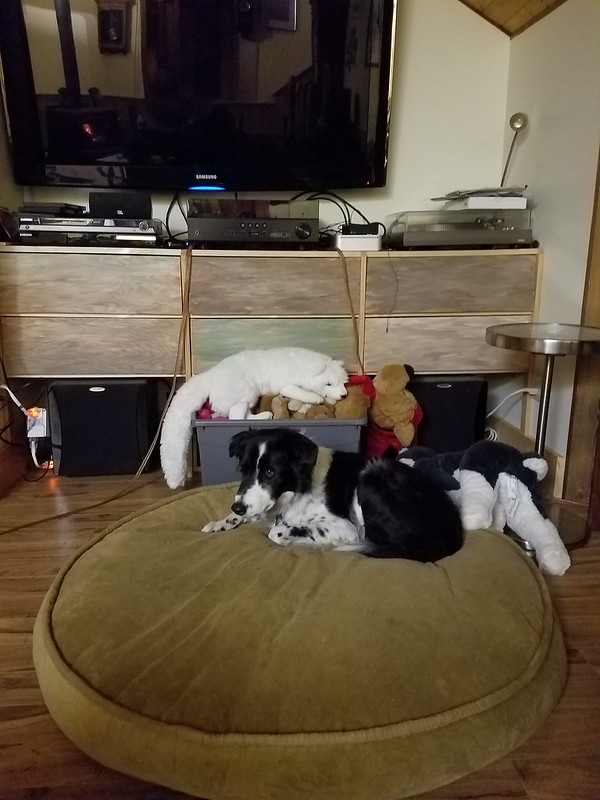 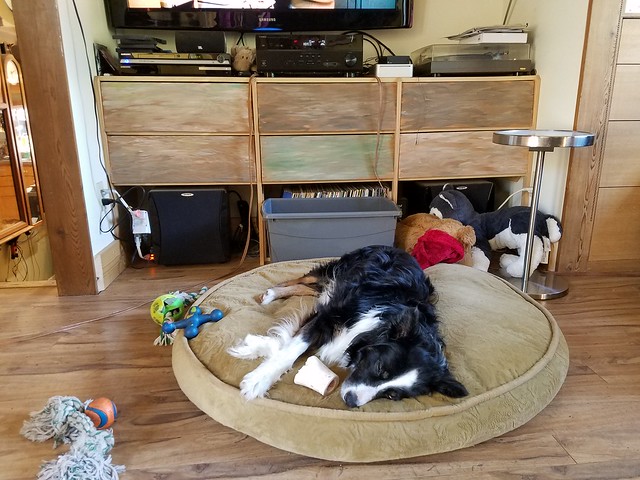 My host arrived home and we spent a couple of hours talking, drinking and getting to know each other, and talking about fond memories of a very special friend. It was a wonderful evening and I completely felt at home…probably too much so. I went to sleep that night in one of the most comfortable beds I have ever laid in and passed out into the most wonderful dreams.

The next week passed in a blur. Andy and his girlfriend, Emily, took me to dinner at a fabulous Chinese buffet one night and I was introduced to his daughter, Kelda, and her boyfriend. They were wonderful hosts and great conversation for the evening. Over the next few days I explored the local beaches with Emily and the dogs, the city of Campbell River, and a really great brew pub with a whole lot of very cute bearded lumberjack-types eating dinner…it was a good time. 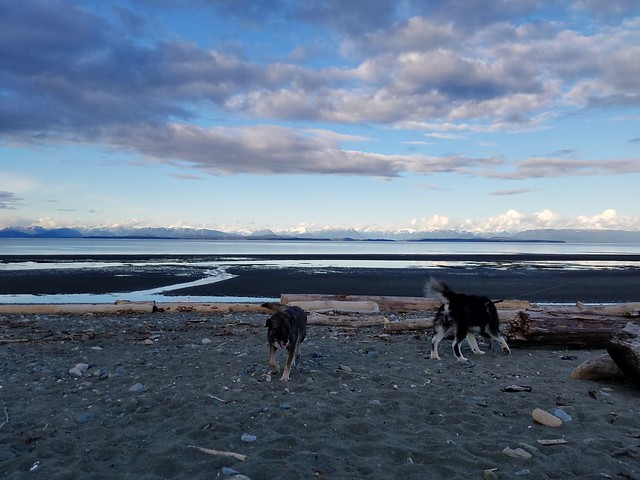 I checked out a couple of hikes to waterfalls in the area. Elk River Falls near Campbell River was the first I did as it was close to Andy and Emily’s place. A mile-long hike from the parking lot, it was easy to find but the path was certainly steep after the first half mile. The views once out of the trees were incredible and the roar of the falls was deafening. To get the best view of the falls you have to cross a slightly-scary suspension bridge that moves A LOT; not recommended for nervous dogs or people with a fear of heights. Even for someone without those fears it was a slightly disconcerting experience but the up close and personal overlook of the falls was worth a few uncomfortable steps. 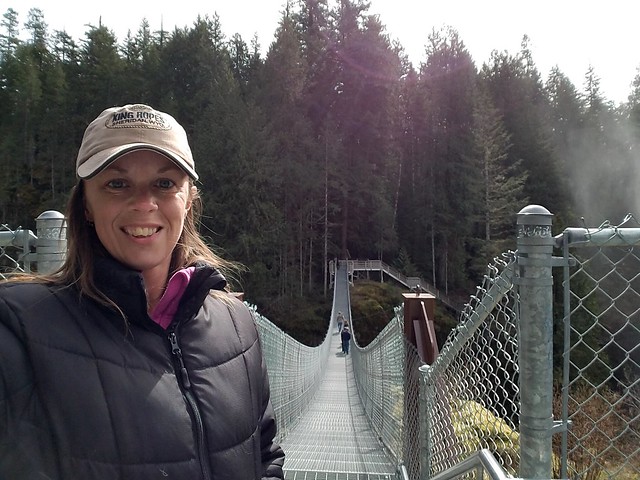 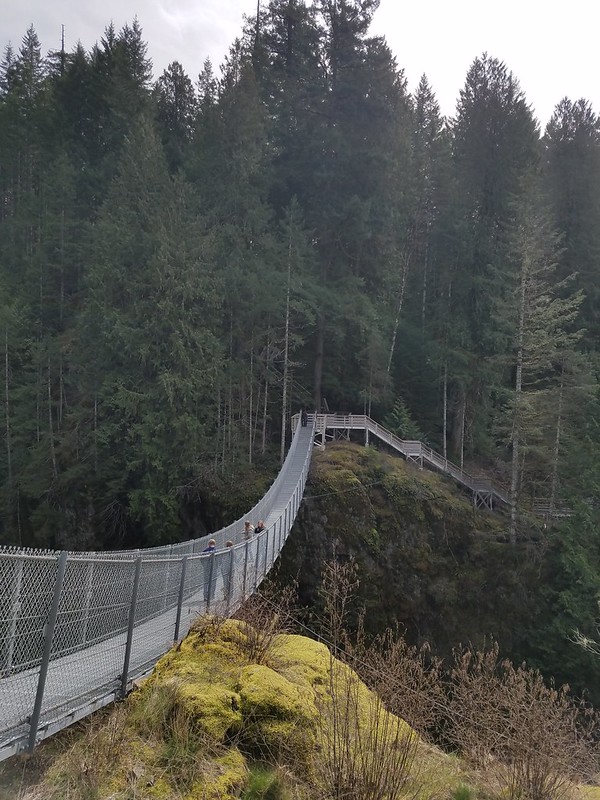 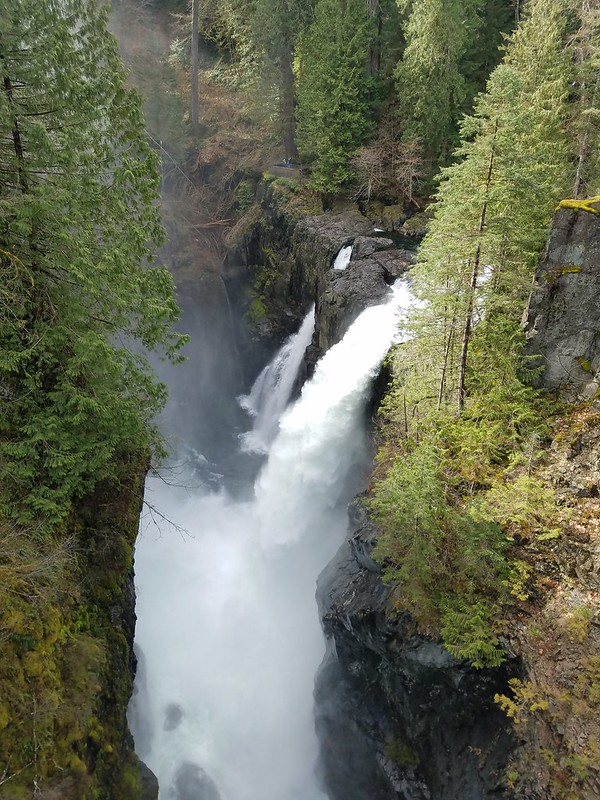 All too soon a week was gone; I didn’t want to overstay my welcome and I headed out. I made a brief detour to Port Alberni, driving past/through Cathedral Grove (the place was way too busy to make me want to stop) with the intent of camping in the area. However I didn’t find the town too inspiring and we didn’t do much except play in the park and check out the boardwalk.

On the way back from Port Alberni we stopped at Little Qualicum Falls. It was a lovely two mile hike that followed the river up one side and down the other and crossed a couple of bridges. It was a dog friendly trail although not as easy to navigate with dogs on leashes, which is required, and my two are used to being able to get out from under my feet and climb rocks without a 6ft limitation. 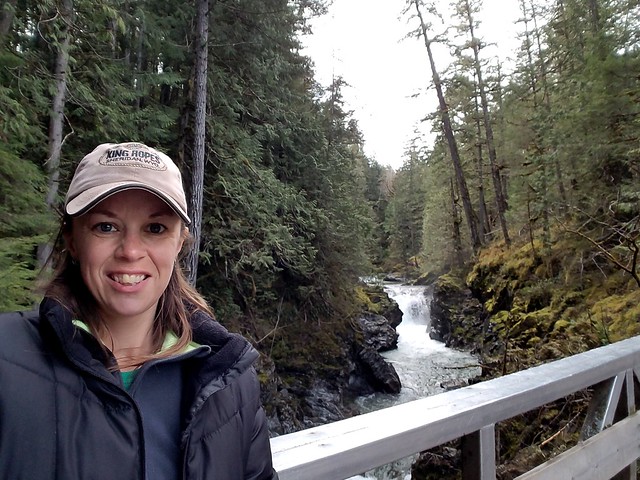 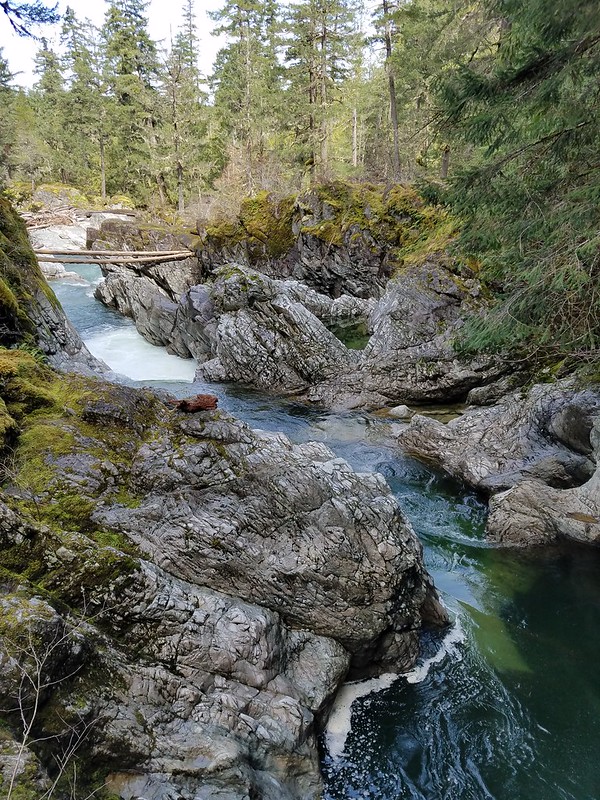 The last set of waterfalls we stopped at I did alone and left the dogs in the truck. Englishman River Falls. The most notable thing about the upper falls on this river is that it flows sideways into one of the narrowest waterfall canyons in British Columbia. The narrowness of the canyon also makes it difficult to establish the exact height of the waterfall but it is somewhere between 75-100ft. It is an easy hike and below the lower falls is a great swimming hole that is popular during the summer. 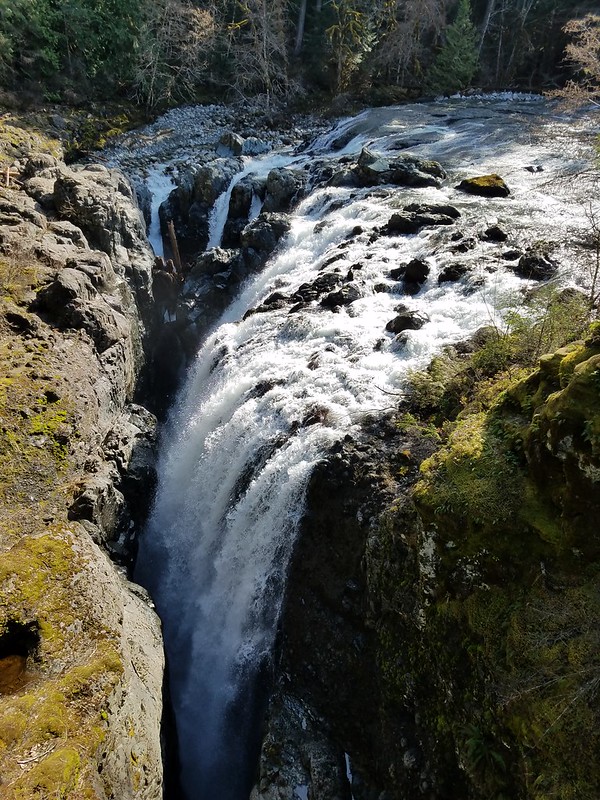 BC has a nice website to show camping locations and I found one not too far from Naniamo where I would be taking the ferry from in the morning. I camped one night in a horse camp before hopping on the ferry to Vancouver. Thankfully this was a much bigger boat and I asked for a top level location to park the truck; I was able to stay with the dogs and the vehicle, but being larger the ferry had so much less movement that Cody didn’t care. 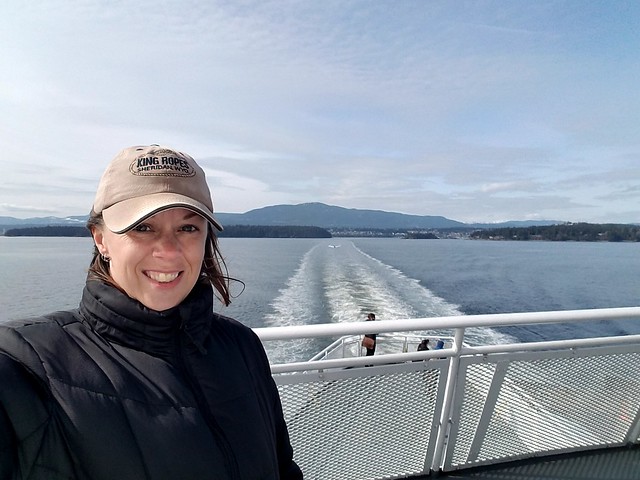 Vancouver was a brief stop for lunch and to let the dogs out and play before we headed for the Canadian crossing of the Cascade Mountains.

A decent campsite outside of Princeton, alongside the river, was our home for the night. I gathered some great firewood and got a wonderful fire going in the afternoon and kept it going as dusk came upon us. With bed in mind and as darkness fell I dropped off some extra firewood I had collected to the people in the Class A that had pulled in behind just behind me and was invited to join them for a fire. I made the mistake of grabbing an extra beer as I thought they would be social for a while but alas they hung out for 20 minutes and then headed inside….and I was no longer interested in finishing my beer. 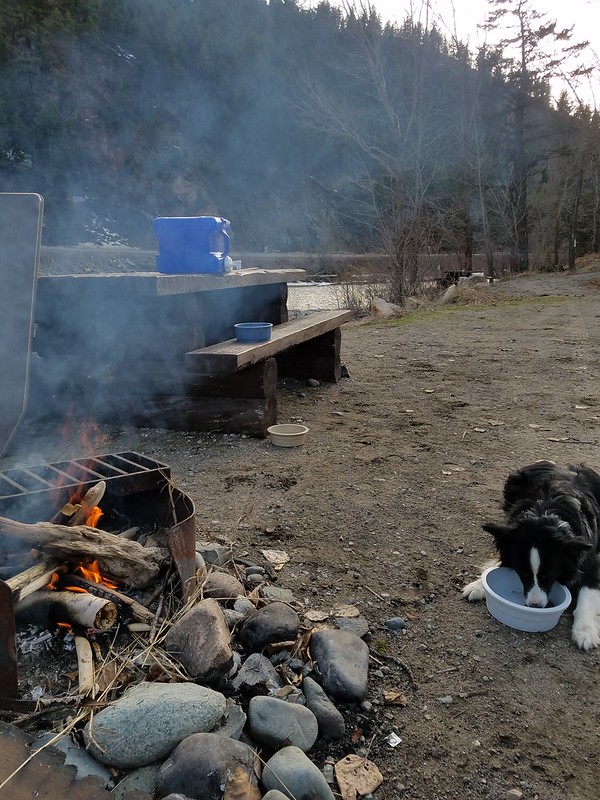 I awoke with the sun to a light dusting of snow on the ground and on the truck. The dogs’ water bowl had a decent layer of ice on top of the water. I dismantled the truck camp quickly in the cold and was ready to head down the road. It was a beautiful albeit cold and damp morning as we headed for the US border in Oosoyos and covered some amazing terrain.

The border crossing in eastern Washington back into the US was far less painful than the crossing into Canada. I think that the minor border crossings are far less strict and worrisome than the major ones and would highly recommend finding the less-busy locations, especially in the height of tourist season or weekends. Of course I am a US citizen which makes it a lot easier to cross this way than the other.