Compared to my last month-long trip into Canada and Washington and struggling to find things to fill my time I figured 18 days in Oregon would be easy to fill…and the first 10 days were.

I headed over the mountain on Highway 12, and south of Mt Rainier…the few clear views I had of the volcano were certainly impressive. The day had weather predictions of 60* and rain but once I got over the pass and onto the west side of the Cascades things quickly warmed up. 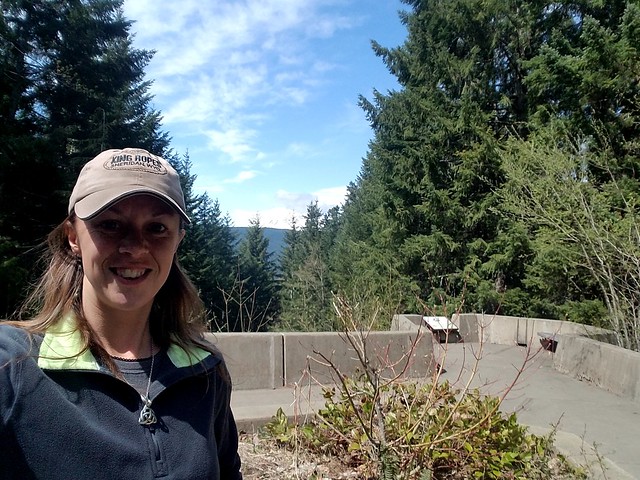 We stopped for lunch and a walk, and in the warm sun it smelled like summer. What does summer smell like to you? To me it smells of two things, depending on where I am, but summer predominantly smells of sun-warmed pine trees…there is nothing like that smell to let you know that winter is done and that there are adventures ahead.

We stopped for gas and beer in Yakima before heading east to one of favorite campsites (cell service and solitude) near Vernita Bridge and The Hanford Reach, on the Columbia River. I started in the location I had camped twice before but the rapidly rising water (a millimeter a minute) forced me to move my truck twice before I felt comfortable. A millimeter a minute on a river the size of the Columbia is A LOT of water. 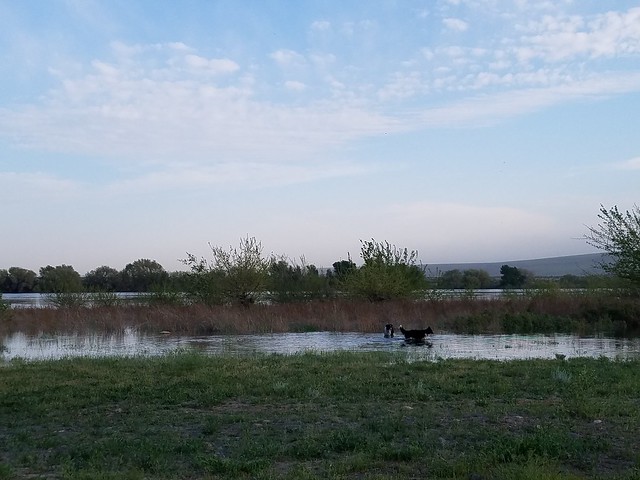 I was in a hurry as I was trying to reach Walla Walla for a meet-and-great with Steven Amell (of The Green Arrow fame) but when I arrived at the location I discovered it was a VIP event and ticket-holders only…and very expensive tickets they were too. I was disappointed that while Steven Amell had mentioned the event on his personal FB page he had failed to mention it was a ticketed event.

With a failed celebrity encounter behind me I headed out of Walla Walla in search of a campsite. Sadly, while it was good National Forest land, most of the back roads were covered in snow and the air temperature was not conducive to wanting to camp (or at least be outside the truck, and there was no cell service). I eventually found a gorgeous campsite alongside a creek that made for a pleasant evening despite being damp.

La Grande was the next town along the road and finally being in Oregon (no sales tax) I got a much-needed oil change. I am very thorough with my vehicle and after reading some reviews on the place I double checked my oil level…two quarts high. I took my truck back and had them drain some of the excess oil until the level was reading correct. The guys were accommodating and courteous and made things right but an over-fill of two quarts can ruin an engine (as evidenced by a previous Google reviewer).

La Grande was a neat little town and I spent a few hours exploring the downtown area, including a pretty decent outdoor store, Blue Mountain Outfitters. With a six pack of good beer in the cooler I headed up to the free campsite above town and on a lake where I found a lovely gravel camping location along the lake shore. While pretty and free, the place is very popular and busy…and probably more so in the summer. 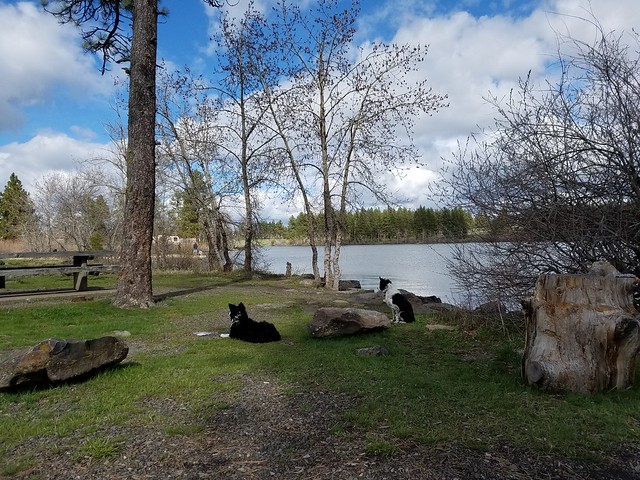 I put La Grande in my rear view mirror and headed south and west once more, not quite sure where I would stop for the night. The road I followed, was absolutely stunning as we followed it through the Umatilla National Forest and past the Bridge Creek Wildlife Area. I didn’t see many signs for hiking trails but it would have been a great area for day hikes or even an overnight or two.

The views never disappointed as we turned south at Ukiah and then west again at Long Creek towards Kimberly, Service Creek and then on towards Mitchell. There were definitely some great camping spots alongside the river but unfortunately all of them were BLM pay-to-stay sites and I had run out of cold hard cash. I finally located a beautiful campsite at the mouth of the Black Canyon, just north of Mitchell, after guessing which road it was on from a very pixelated Google map (no service). And while the site had no service the view was stunning and we were surrounded by amazing red cliffs and canyons. 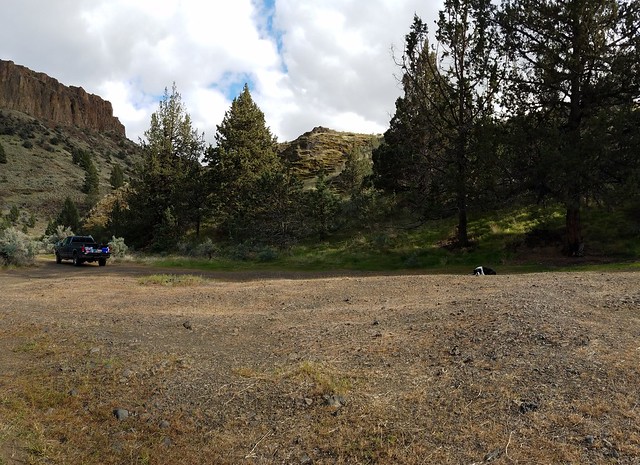 A gorgeous night was followed by a chilly morning and all thoughts of hiking the canyon disappeared from my mind as we bundled up and hit the road early, heading west again towards Prineville. The views continued to be stunning and we stopped for lunch at Smith Rock.

Again the lack of cash was catching up with me as Smith Rock (well worth a visit, and about 45 minutes NE of Bend) required a $5 day use contribution. Still, I enjoyed lunch and took a few pictures while walking the dogs before we headed out to look for an early campsite. 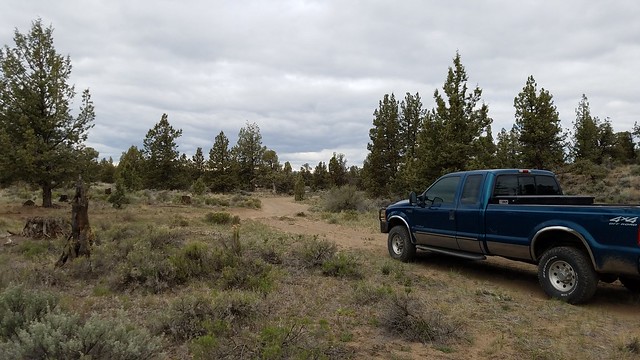 Freecampsites.net once again listed a great location just west of Terrabone with some fantastic views of the Three Sisters and Mt Bachelor, as well as the Deschutes River canyon. There were dozens of campsites to choose from, some with better views or better cell service than others…and all were sandy. 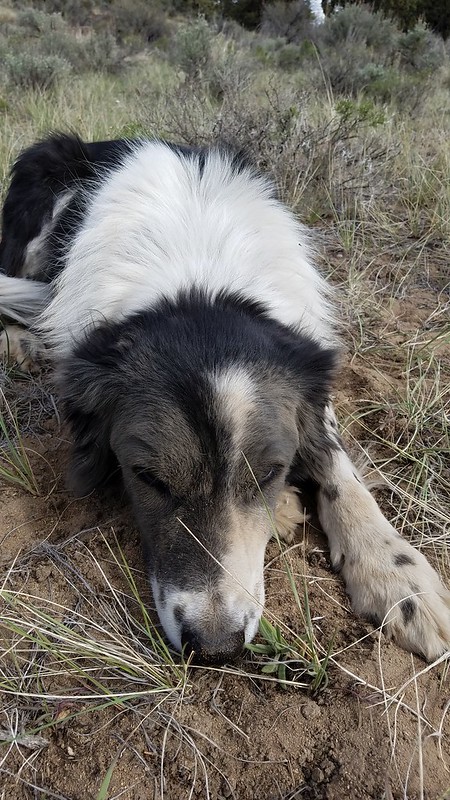 We picked a remote site with decent cell service but no view since we arrived early in the day, and then went for a long walk around the access roads in the area. I dropped a Google pin that pinpointed the truck and set out…this turned out to be a great decision as it would have been very easy to get lost and disoriented with all the winding roads, and we almost did. 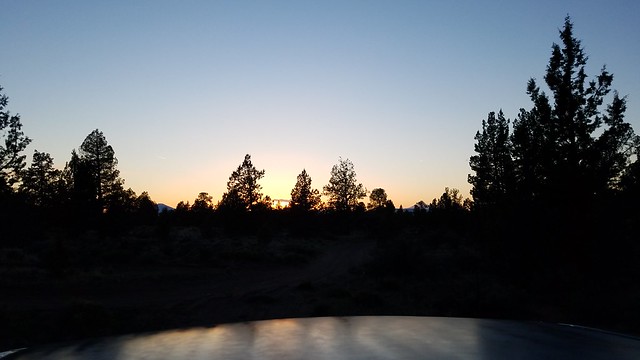 The following day a quick, chilly but very cheap shower was found at the Cascade Swim Center before we headed south into Bend, Oregon…but Bend deserves its own dedicated post.