We departed Bend on a Sunday after four amazing days exploring the town and its brew pubs/ breweries. One place of note that is very close to Bend but that we had avoided during our stay since I wanted to devote a day to it on the way out was Newberry National Volcanic Monument. This was one I’d never heard of but since it was so close and the map promised some interesting possibilities I wanted to make a day of it. 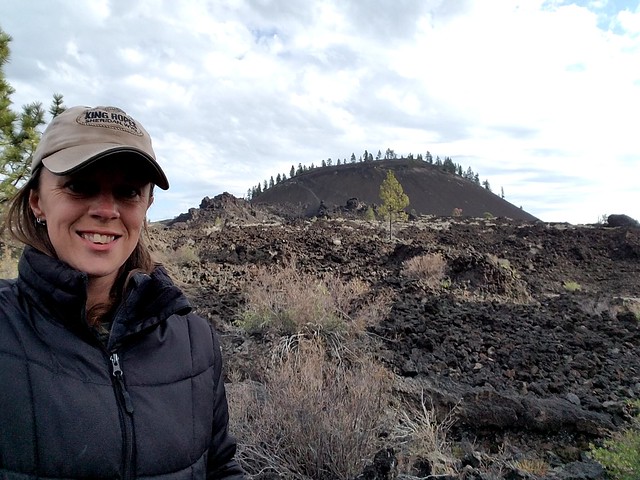 I was up earlier than necessary, as always, and was on the road way to early. We stopped for some groceries at Walmart and then got fuel before heading south.

Our first stop, Lava River Cave, didn’t open until 10am and we were an hour early. I backtracked to the visitor center which was on limited hours since it was still the shoulder season (late April). I took a short hike up the on-site lava cone and followed the paved path through the lava fields. The great thing about these short walks are the many signs that explain everything you are seeing. I got great views of Mt Bachelor and the Three Sisters, and I stood in a lava valley where lava had once flowed through. It was pretty intense and very impressive to see that plants and animals can still make their homes in such a harsh and unforgiving environment. 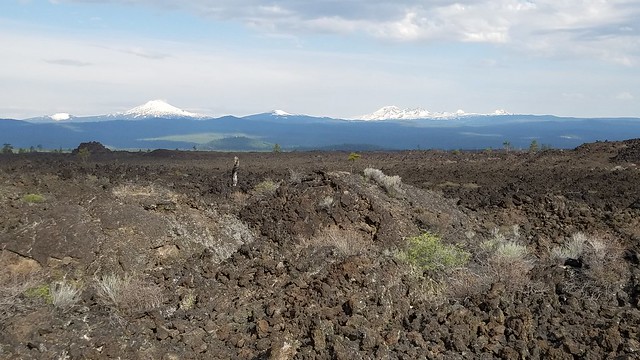 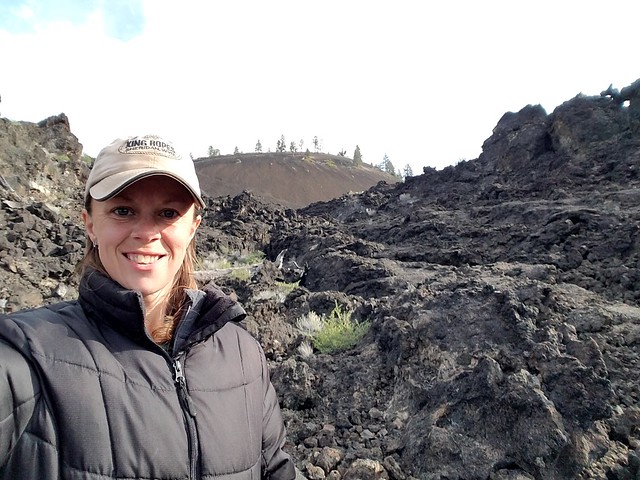 10am was fast approaching and I headed to the gate of the Lava River Cave. I arrived a few minutes before it opened. I tried to park in the shade as much as possible for the dogs, but as long as I pointed the nose of the truck into the sun’s direction they would always have shade under the tool box. I grabbed two flashlights and a warm jacket and headed to the orientation point.

The rangers emphasize the importance of not wearing any clothes into the cave that have been worn in any other cave system. The reason for this is the dreaded white-nose syndrome, a fungus that is wiping out bat populations across the US. 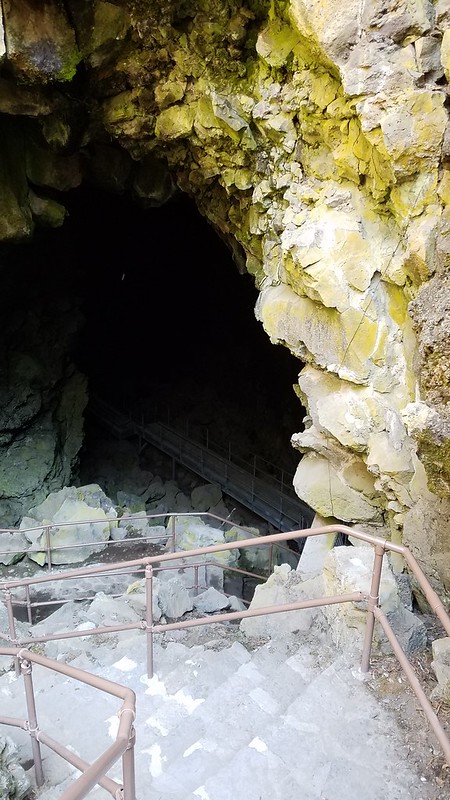 After the orientation I confirmed that I had a pass and then rented a lantern (definitely recommended) before heading down into the cave. I was the second person in and I’m glad I was. I hiked alone, with only a high-intensity flashlight to help me see. As soon as I was in the lava tube the temperature dropped immediately and ice could be seen below the metal cat walk where daylight was still visible. 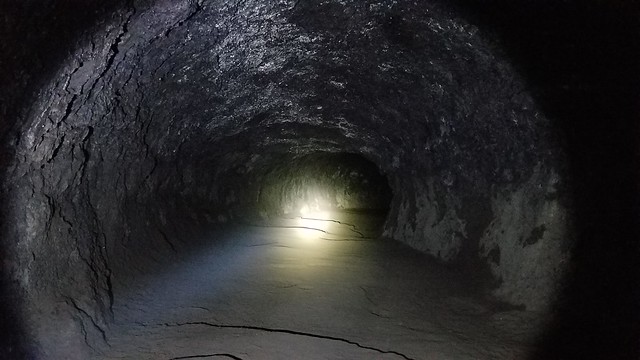 The Lava River Cave is a lava tube, and in some places a double lava tube, that runs for more than a mile (although only a mile is accessible) more than 50ft below the surface. It has a constant temperature of about 42* and my hands were definitely feeling it after a while (I would certainly recommend gloves as well as a warm coat). 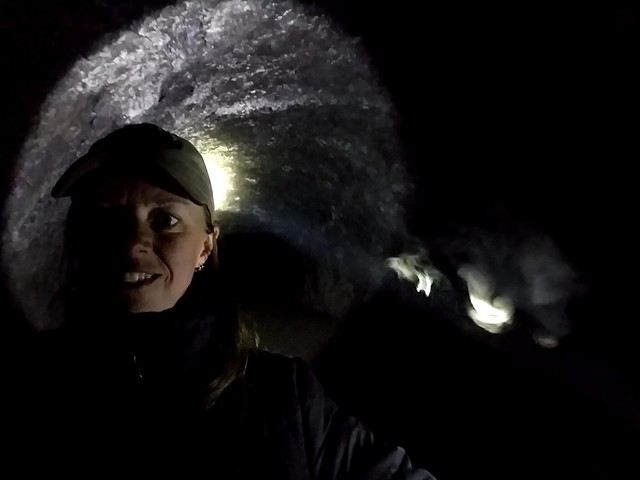 About 10 minutes into the hike I turned off my light. I don’t think I have ever experienced such encompassing darkness. I was glad to have the light I rented ($5 at the entry kiosk) especially when I tried out my own flashlights…I would have missed a lot if I had relied on them alone…they just weren’t bright enough.

The cave was impressive and I constantly stopped to look around. Being one of the first into the tube I pretty much had the place to myself on the way in and I loved that…it was definitely worth being early for. The way out felt shorter and I ran into many groups coming down which definitely impinged on the feeling of the cave a lot. 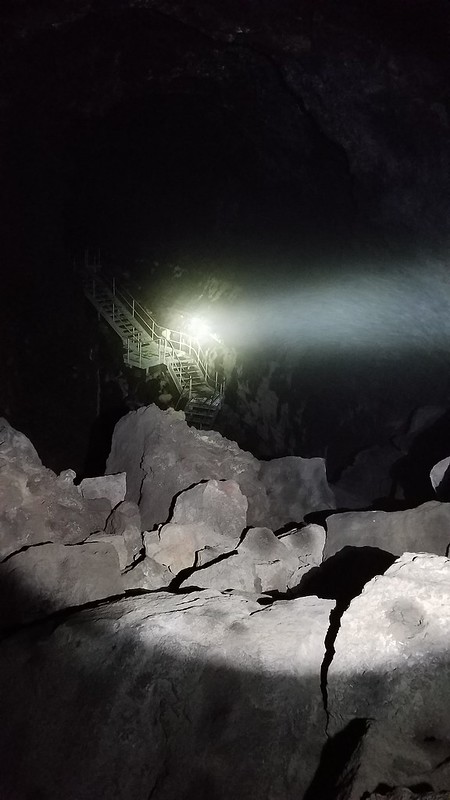 Climbing out of the cave I walked into the heat of the day and found an immediate need to remove many layers. I let the dogs out for a few minutes before heading out.

Our next stop was the Lava Cast Forest. What was supposedly a short drive on a gravel road ended up being a smoke-filled journey on one of the worst washboard roads I have ever had the misfortune of being on. There was a prescribed burn happening at the lower end of the road which wasn’t much of a problem and actually kind of interesting…the problem was the cheese-grater washboard road…absolutely miserable. However we did eventually reach the top in one piece…my chair sleeve was in tatters, however, since Cody hates roads like that and took it out on the sleeve. At least it wasn’t the chair! 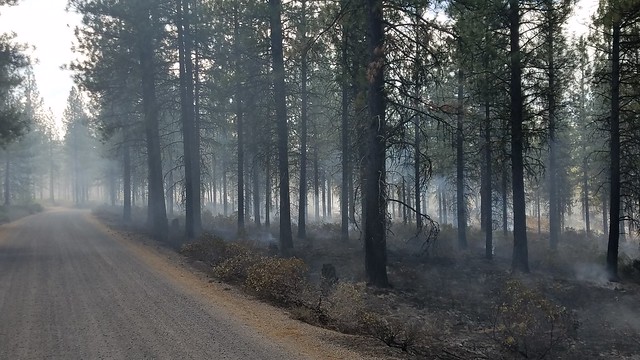 I left the dogs in the truck and did the mile-ish long walk through the lava field. I was expecting tall lava casts in tree shapes…what I saw was still interesting but not expected. Lava casts are where the lava enveloped and encased trees. As the trees decayed and rotted under the lava they left holes, casts of their trunks in the lava. Some casts were upright and looked like large pole holes and others were horizontal from trees that had already fallen before the lava covered them. It was worth the drive, despite the rough road. 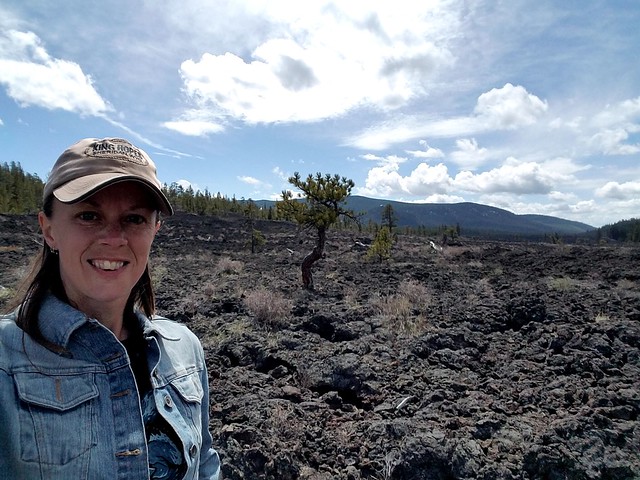 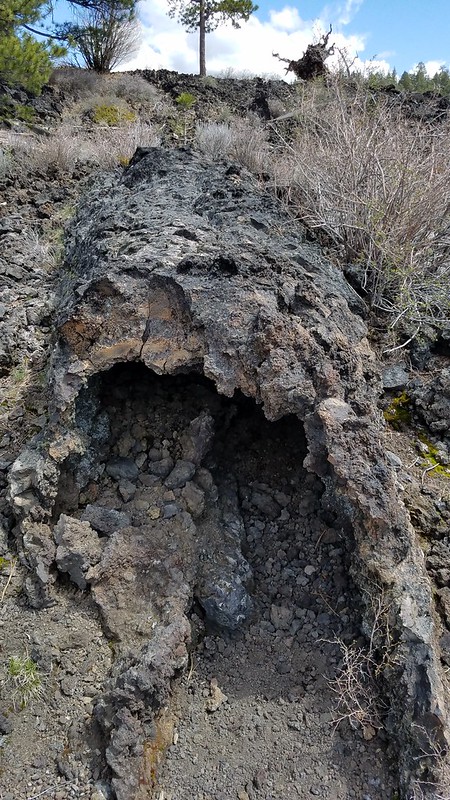 With the lava forest and cave done I was hoping to drive up to Newberry Crater, Oregon’s largest volcano but the road was closed for the winter. I made do with a quick stop at the South Ice Cave about 30 miles east of La Pine. I had seen other ice caves before and didn’t find this one any different, but worth a stop if you haven’t seen any others.

It was time to find a place to stop for the night and I located a decent spot on BLM land with good cell service. 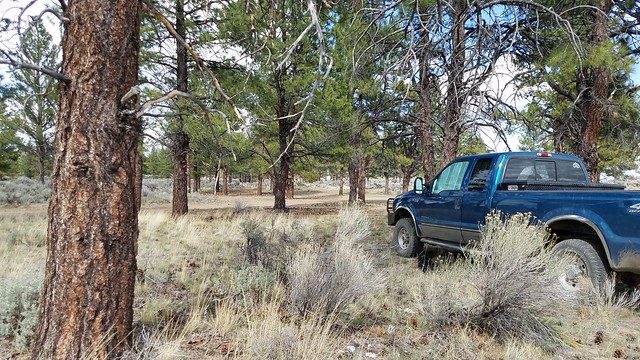 Driving south the next day I drove by Fort Rock, an old lava cone that used to be surrounded by an ancient lake. It is an Oregon State Park and looks like the fortress of something out of Morder; it looks slightly out of place in the rest of the flat landscape. I paused to take a couple of pictures but didn’t take the trail into the caldera where one side had been eroded away. 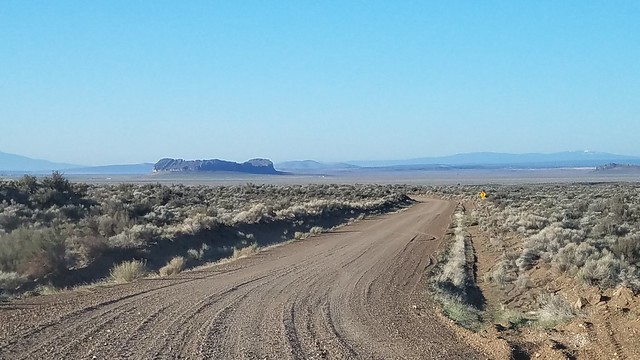 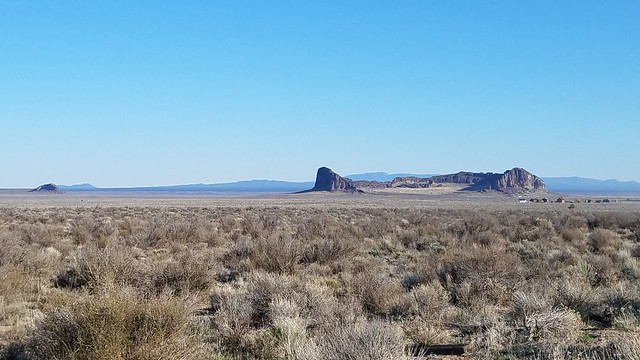 The road continued south and I stopped to check if the road I wanted to take was open. Two state road construction employees confirmed that it was but warned that it wasn’t the smoothest road to take to get to Klamath Falls. I wasn’t in a hurry and wanted to take the scenic route. The map had the road shown as paved, and apparently this is what is classed as a paved road: 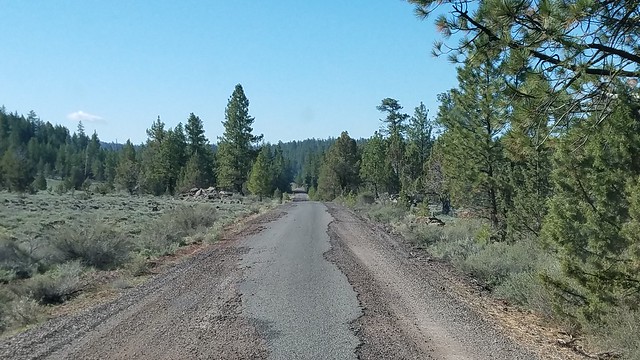 A quick shower in Klamath Falls and we were off to find another campsite before heading to Ashland. Freecampsites.net had one listed along the lake nearby and we went to check it out but the mosquitoes were horrendous and it didn’t take me more than three minutes to decide it wasn’t for us…not to mention how busy the location was. We did find a gorgeous campsite in the pine trees not far up the road that had zero mosquitoes and much better cell service. 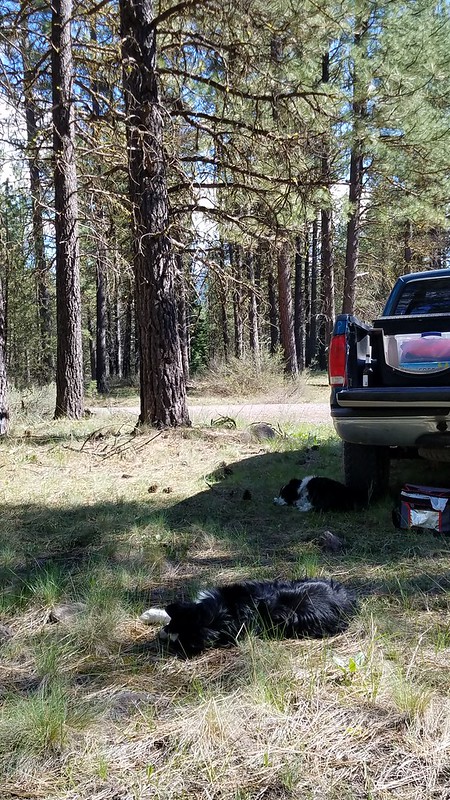 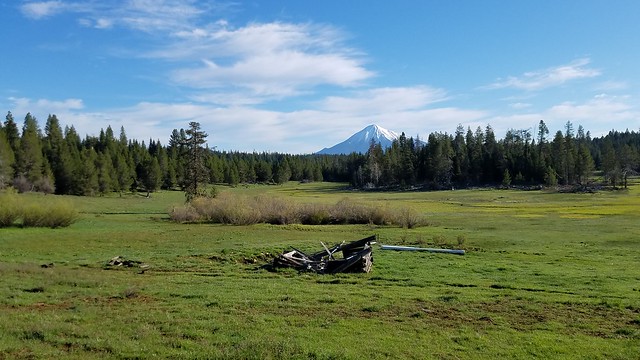 The next day was a quick stop in Ashland, where I had planned to spend a couple of days but didn’t, and was followed by a pause in Medford to buy two new tires for the rear of my truck as they were almost bald and probably no longer legal. That put a hurt on the wallet! The rest of the day was a scenic drive, and a very long and frustrating one, to a gorgeous creekside campsite where someone had left some cut wood and plenty of fire-starter…so I had a really nice campfire, drank some beer and played in the creek with the dogs. No cell service but it was such a pretty place I found plenty to keep us occupied. 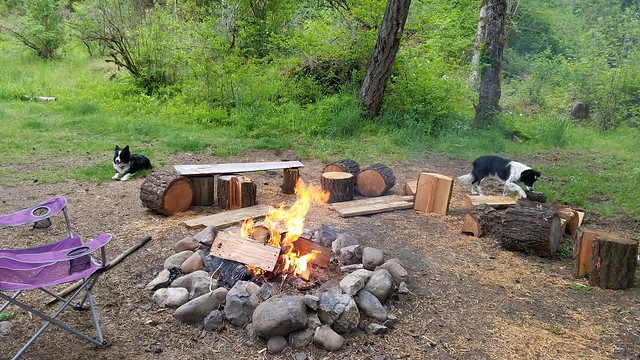 I made a brief stop in Crater Lake National Park to see how it looked in early May compared to the last time I had visited it in mid July…definitely a different place with snow at the Rim Lodge still 10+ft high in places. It was cool to see but I didn’t stick around long and headed out. Before heading north again to look for a campsite we stopped at the Rogue River Gorge, a short but slightly-scary canyon where the Rogue River careens through a narrow cut in the rock. It was gorgeous but as always the overlooks made me slightly nervous when looking down into the cauldrons of boiling water beneath me. 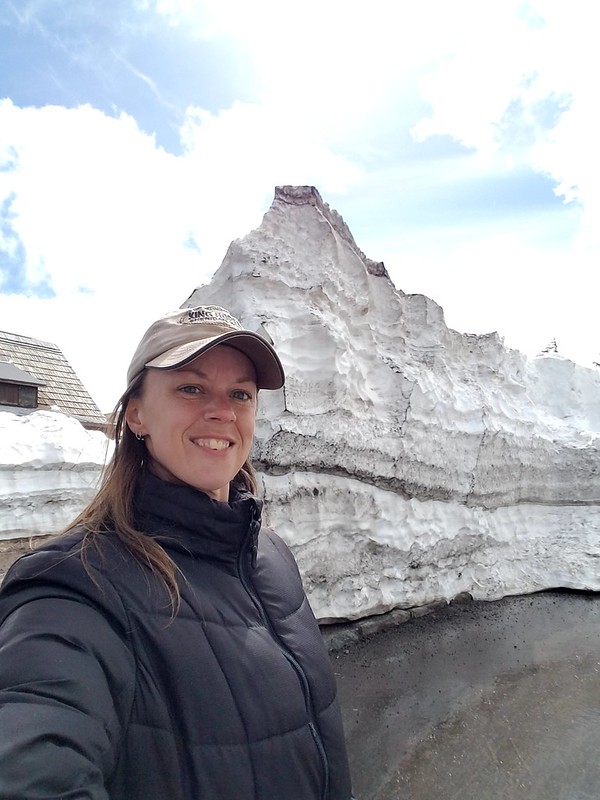 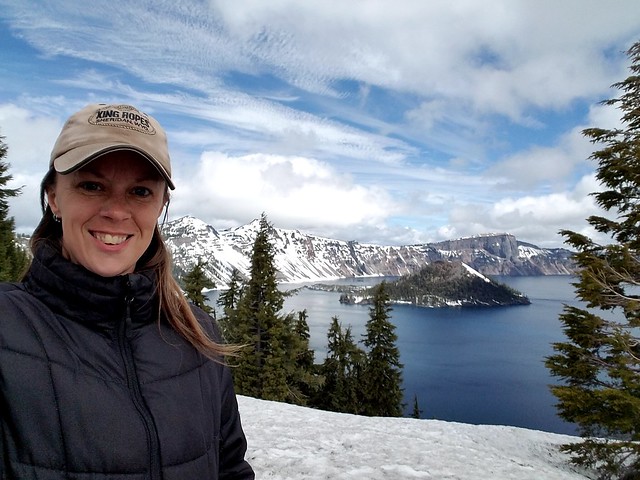 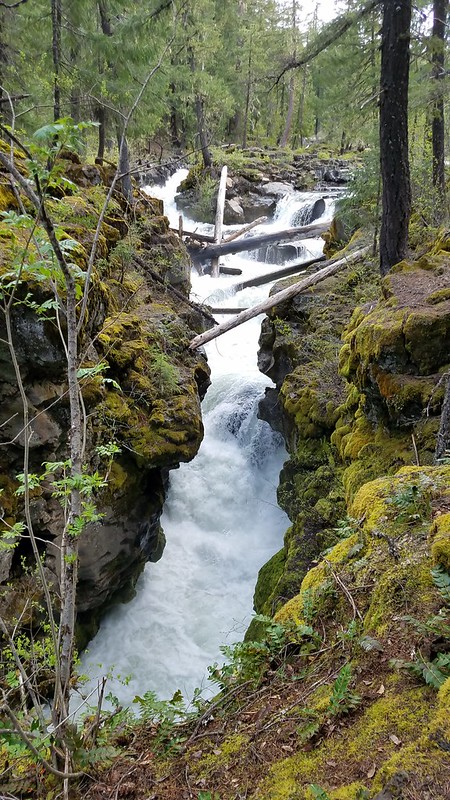 There were few options for campsites with cell service in the area and we ended up at one of the worst and least impressive sites I’ve ever had the misfortune of camping in. Of course in taking the dogs for a walk up the road I found a pretty nice large campsite in some trees but I was already set up and didn’t want to move…it was really only a place to sleep. We left early. 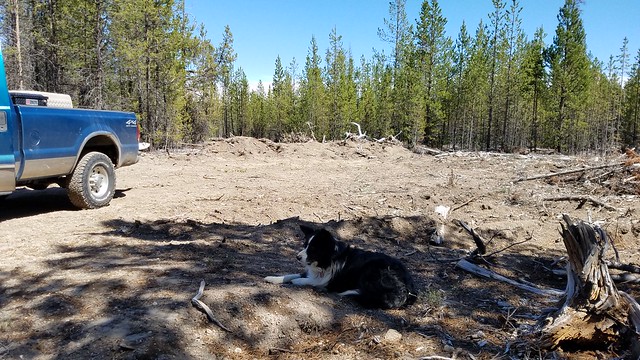 Our last Oregon stop was at White River Falls State Park, a small recreation area with some interesting history in regards to harnessing hydro-electric power and some pretty waterfalls. It wasn’t a large place but it was a nice place to take a break before heading to a county fairground campground for $10 a night and taking a shower. 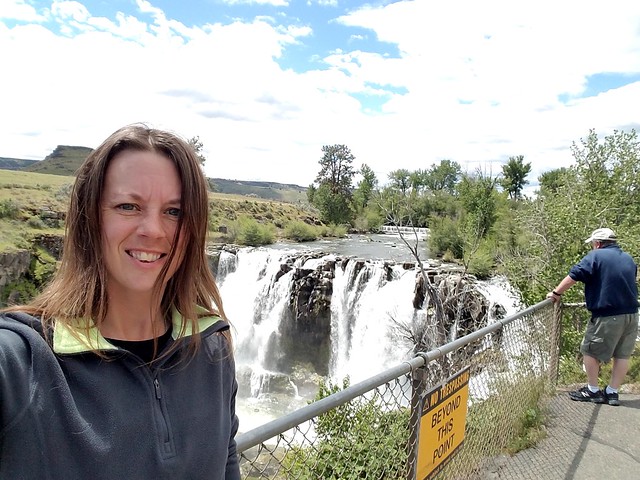 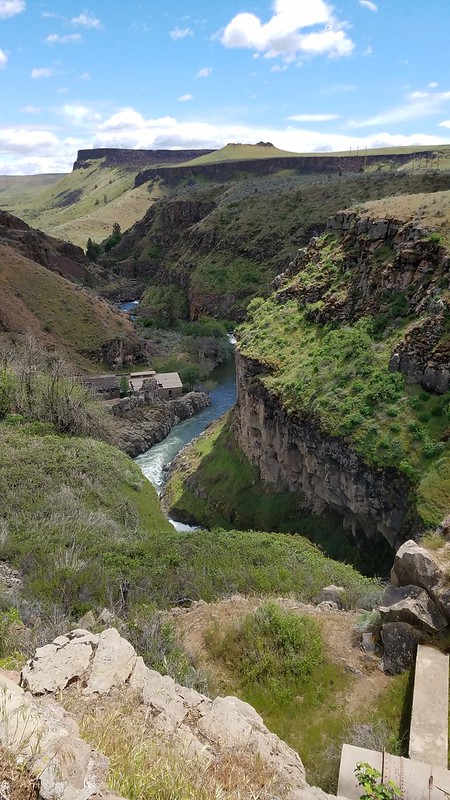 The last couple of days were spent driving back through Washington as I returned to my friends’ place near Olympia to house-sit for two weeks while they were on vacation. 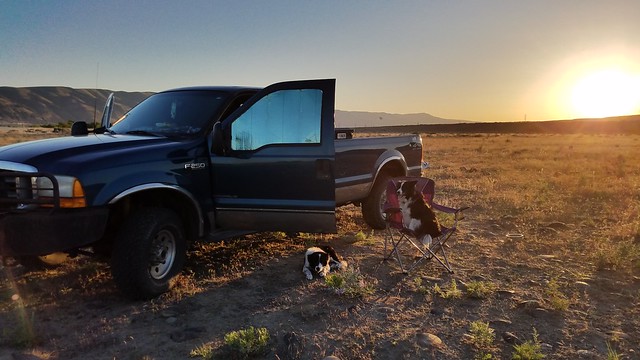 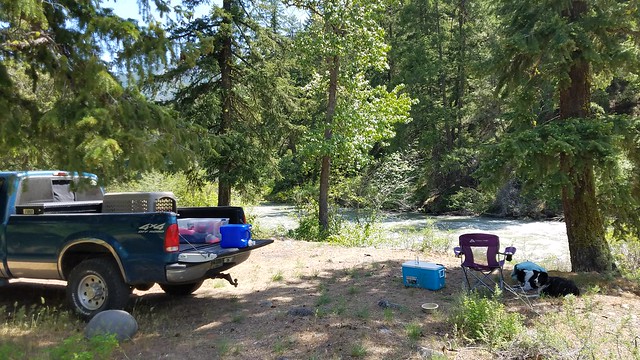