I was beginning to think someone didn’t want me hiking this trail. Two mornings my truck wouldn’t start due to the cold and higher elevation. Then my backpack broke after I had already loaded it and stored it in a tote for the next day. I had to make a 120 mile trip to Colorado Springs to buy a replacement during which time I also got a nail in my tire. It was definitely an ordeal getting to this point, but two days after I was supposed to start we were finally on the trail…on the summer solstice aka Hike Naked Day (and no, I did not). 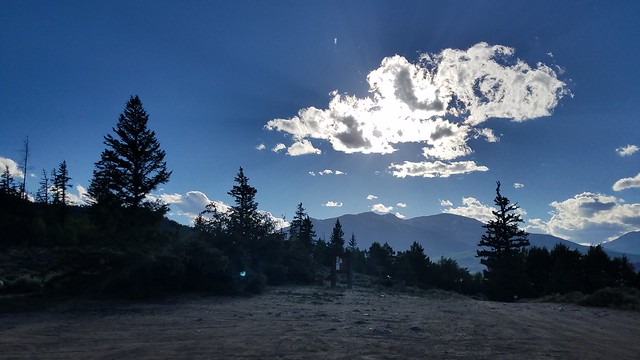 After a quick call to the Leadville Ranger District about leaving my truck at the trailhead at Twin Lakes we set out on the Colorado Trail for the first time. As per usual for me we managed to take a wrong turn right off the bat and headed toward the other trailhead. So with an extra mile under our belts by 9am we finally got back on track and followed the southern edge of Twin Lakes for a mile and a half before the Collegiate East trail (official Colorado Trail) and Collegiate West trail (official Continental Divide Trail) diverged. 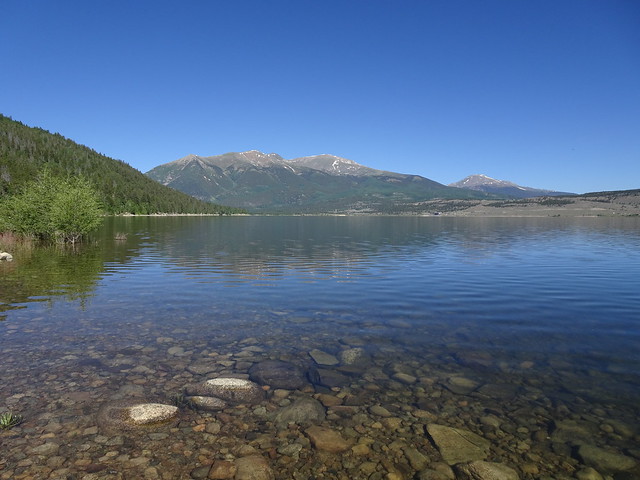 A short steep climb soon leveled out and we hiked through scrub, pines, aspens and sage brush. We passed another couple who had backtracked to the lake for water as they thought the seasonal creeks had no water. We chatted for a while and then I headed up the trail.

It was a gorgeous day but the sun was definitely starting to heat things up and we were glad for the shade. All seasonal creeks were flowing which meant the dogs had consistent access to water and I didn’t have to ration mine so much (we would have run out). An extra hot climb along a powerline road was the least fun part of the hike, but it was fairly short and there was a fast flowing creek the dogs made excellent use of. 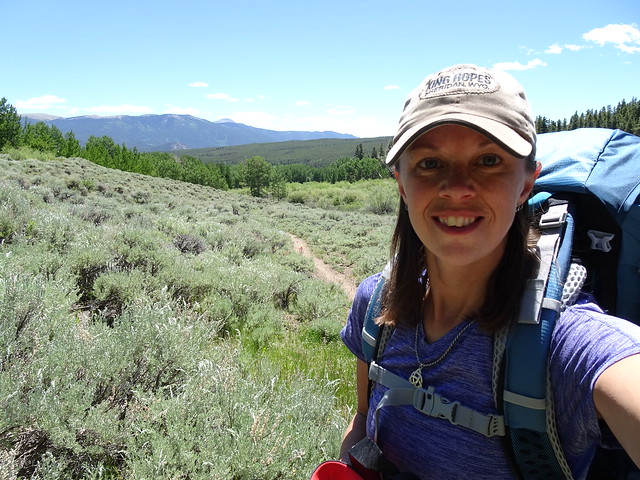 With the trail at lower elevation there were not many views but eventually we climbed over a ridge to see views of some of the Collegiate Peaks we would be climbing over the next few days.

The whole trail was very well sign-posted (loved it) and the first day on a mostly level trail was much appreciated. 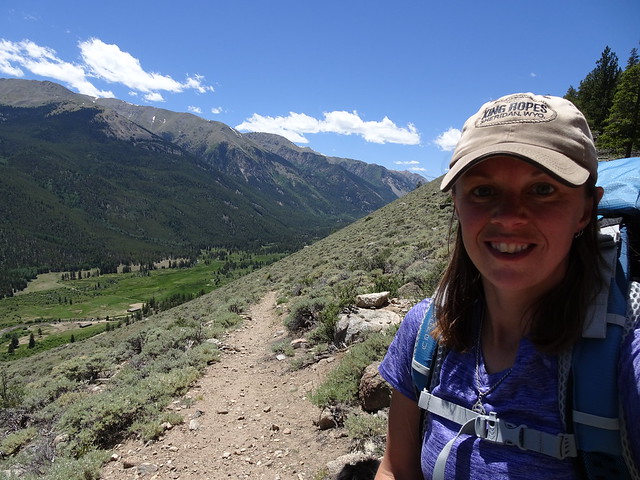 We ended up back at Clear Creek Reservoir where I had camped the night I realized my backpack was broken. It was a short 11 mile day and we camped in a very private and secluded location next to the creek, and had camp set up by 2:30pm…definitely too early to be camped when there is nothing else to do but there was no way I could have made the 3500ft climb that afternoon as it was another 6 miles to the next water source. 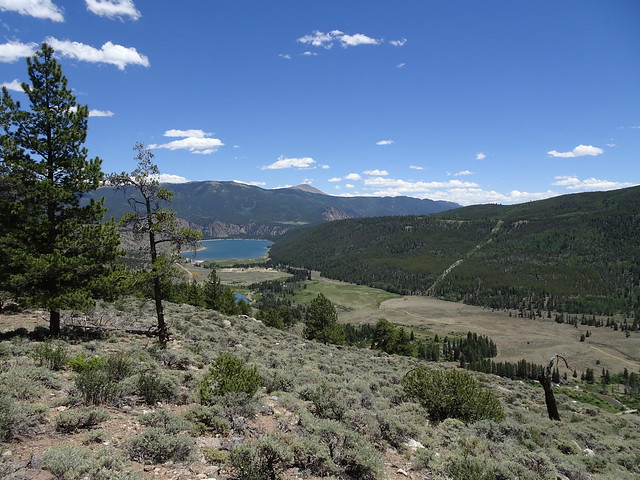 The dogs played in the water, cooling off after our long, sun-exposed hike down to the lake and I tried to fill my time as best as possible. I kept an eye out for the couple behind me as we had leap-frogged fairly constantly most of the day and I figured I would see them at the lake and invite them to join me. But as hidden as I was and with my limited view of the trail I missed them. I did run into another solo female hiker while out walking on the trail with the dogs but she was making for the next water source as her time on the trail was more constrained than mine. 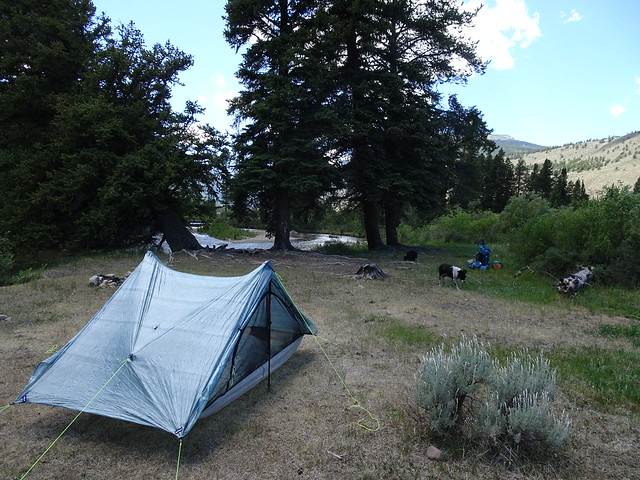 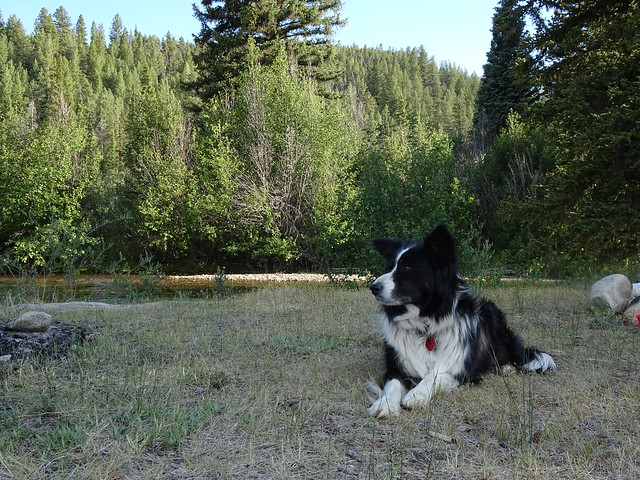 I was up early, for me, at 6:30am  with the sun already warming my tent. With the day already getting hot I was on the trail by 8:15am. I stopped and chatted with the couple I had met yesterday but they didn’t think they’d make it to the creek crossing I was planning for as my camp site for the night…the elevation gain seemed too much.

When I say “brutal” I mean we started an ascent that climbed over 3500ft and never felt like it would ever end. It was barely 5 miles but that was the longest 5 miles of my life. I started out well but quickly lost steam and it took us 3 hours to do 5 miles. I had absolutely no energy to give…maybe something to do with just a granola bar for breakfast and a bag of chips (I just couldn’t eat and had no appetite).

I passed a handful of backpackers coming down and almost all were doing the Collegiate Loop in the opposite direction to me (I’m trying to save the best (the Collegiate West) for last. 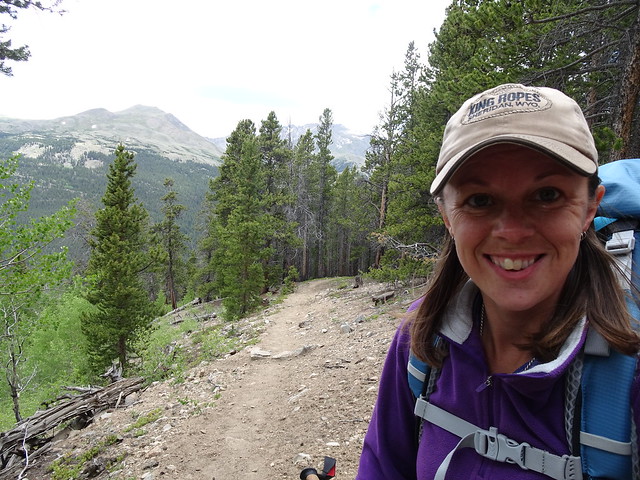 By the time we reached the top of the ridge which sat below Mt. Waverly I was done and I stuffed cheese sticks, some jerky and the other breakfast granola bar into my mouth before resting for a half hour…I was in a serious calorie-deficit but I still wasn’t feeling hungry. Sadly the wind picked up, the sun went away and my nap didn’t last very long. At least the dogs got to rest for a while and get some sleep.

We were finally going down for a couple of miles and the trail was great. I was really appreciating not having to go up for a while. 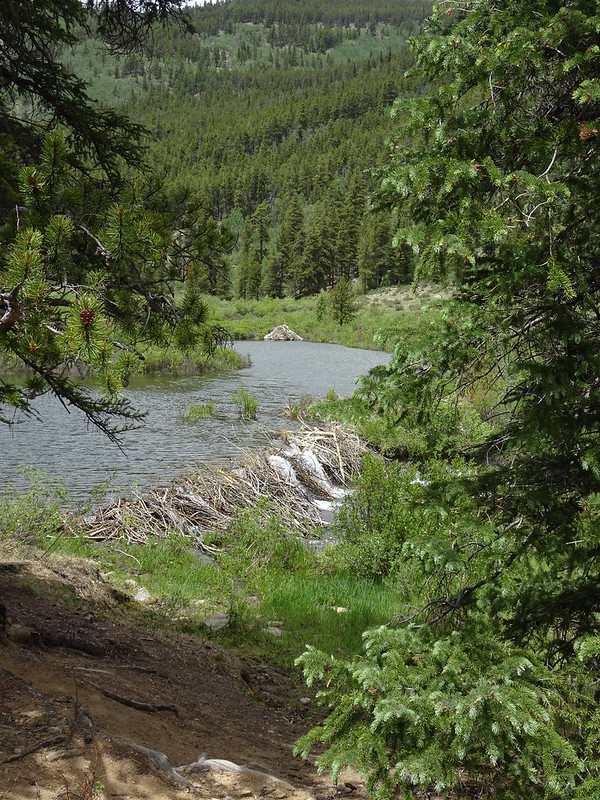 Pine Creek was at the bottom of the descent and I had planned on trying for a nap again there but again the wind picked up and the sun hid behind clouds…it had been gorgeous not 10 minutes before. Rain spattered briefly so I hunkered down under a tree for a few minutes and ate a bag of cookies to try and give my body some much-needed calories.

I loaded up with water for another 1500ft climb and took a moment to enjoy the engineering feat of the beavers who had built a pretty impressive dam just above the bridge. Again we started off well and the trail was moderate but got steeper and rockier the higher we climbed. I was making it 100 yards before having to stop and it took us two hours to reach the top of the ridge below Mt Harvard. I also got my first glimpse of some wildlife…the rear end of a cow elk disappearing into the trees. 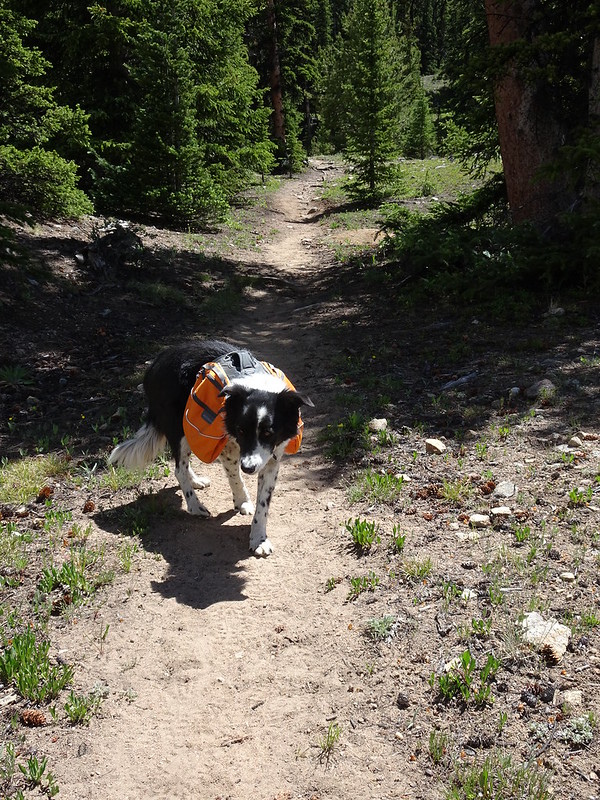 A mile from the top I met a couple who were thru-hiking the Colorado Trail (or as much of it as was open with the fire outside of Durango) a mile from the top. The guy had the same pack as the me (my ZPacks Arc Haul not the Osprey I was currently carrying) and in the same color. We chatted about the broken stays in my pack and they were also surprised that they would bend. We parted ways after they informed me I still had a mile to go and another 400ft if elevation gain. I groaned inwardly. The worst was the false summit I reached…those things suck!

But we finally got there and this time at the top we were rewarded with amazing views of Mt Harvard and Mt Columbia and the valley below us. You certainly can’t get those views without a little work. 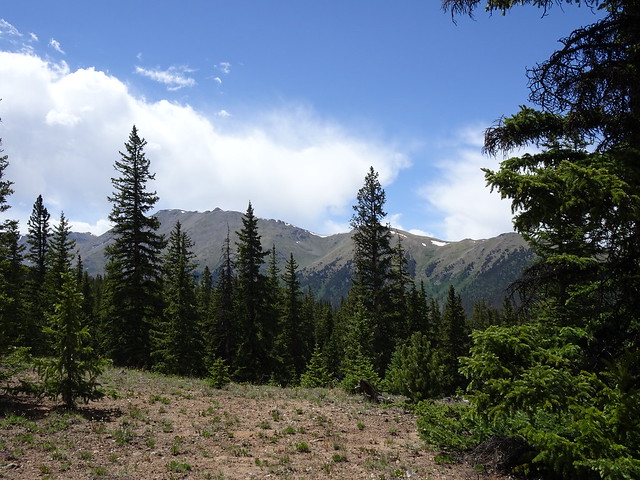 Finally we were on the home stretch and we cruised the last 3 miles to our campsite above Frenchman Creek, winding down the valley and being completely awed by the towering peaks just above me. The guide stated there was camping 200 yards from the bridge that crossed the creek and we found a flat a secluded piece of dirt to pitch the tent well off the trail.

With the clouds looking like they might be threatening rain, as they had been doing on and off all day, I quickly got the tent up. The clouds moved on to places where, like those before them, they dumped their load further east…I was grateful!

Dinner, as has been the norm with my “home-made” backpacking meals, left a lot to be desired and was much more food than I could eat (again, just not hungry) and so I shared with the dogs who happily wolfed it down (glad to have them have the extra calories when it’s just rice, chicken and peas). I am going to have to rethink my meal plans for future trips as it would really help to have something tasty.