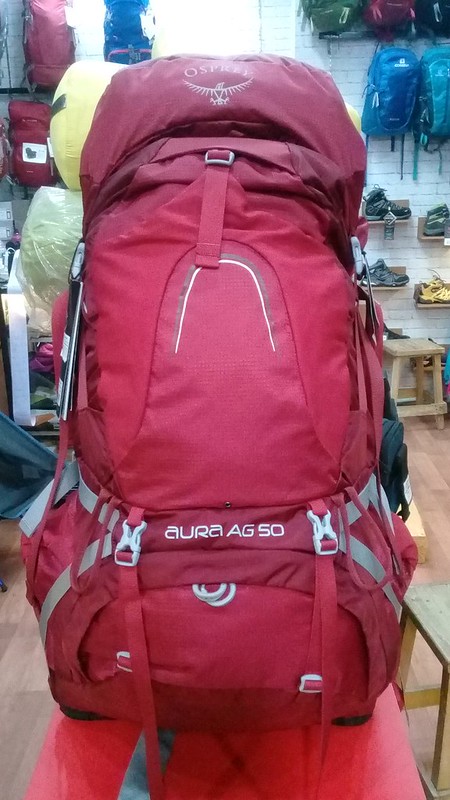 The night before my Collegiate Peaks Loop attempt the vertical stays in my Arc Haul bent and my only other backpacks were 400 miles away in Idaho. I had one choice; to drive the 120 miles to Colorado Springs and the REI to purchase a new backpack so I could get on the trail.

As I have my gear dialed in to my 62L (49L main compartment) Arc Haul I knew I didn’t need anything larger so the Aura 50L seemed to be a good starting place. As soon as I put the pack on it fit like a glove and kind of felt like I was being hugged from behind. It was a novel concept and feeling.

Of course I don’t ever just try one but I dismissed many out of hand due to belt designs. Gregory, REI’s own brand and others all have belt attachment set-ups that “bulge” in the same way that the ULA Circuit does, and I found it uncomfortable and miserable to wear. That really left me with a choice of Osprey packs with their mesh and Anti-Gravity or Airspeed suspensions.

In the end and after walking around the store for 10 minutes with 20lbs on my back I went with the first pack I tried: the Osprey Aura 50L in size medium. 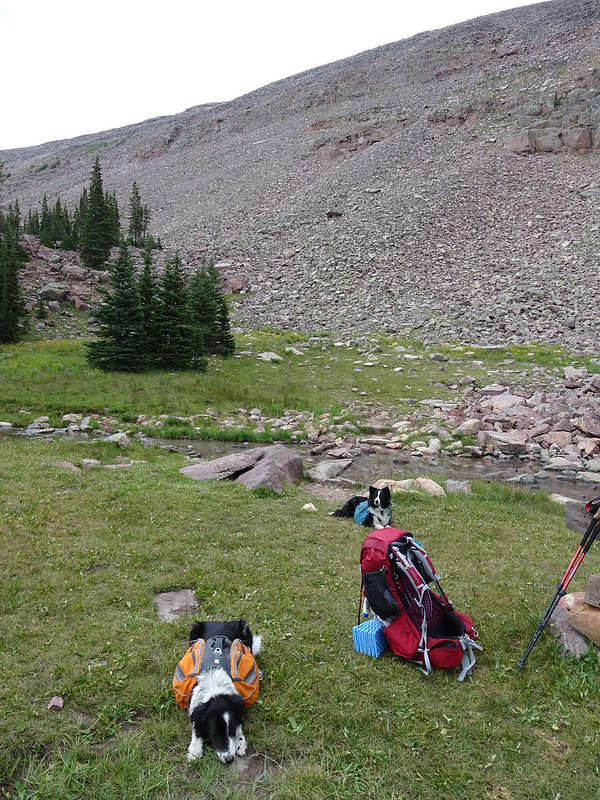 At a little over 4lbs the Aura is heavy for a 50L pack but without the brain (something I have zero need for) it comes in at around 3.5lbs. While still not light that puts it not much heavier than my Arc Haul (with all the add-ons and mods) and with the AG suspension you can barely feel the pack on which makes up for the extra weight.

My only issue with Osprey’s sizing is the discrepancy between height and belt size. I am very slender, petite woman (5’5″ and 112#) but I have a 19″ torso and as such I needed the pack in a medium size. However, the belt on this size can barely be made short enough for a skinny person, but at least it IS adjustable. I had to bury the movable wings behind the pockets on the belt as far as they would go and I still almost run out of webbing to tighten on the buckle.

With my odd sizing issue aside this pack fit my gear great and in almost the same manner as my Arc Haul. The compartment design is different and has a sleeping bag compartment with  zipper access. I do not use this but the compartment divider is movable so it can be turned into a single-compartment pack. The bottom of the pack slopes up from the frame which means it does NOT stand up on its own…a feature I find very frustrating on any pack and I don’t like to lean my pack against rough surfaces in case they get torn or snagged. However this is a minor annoyance and since I carry my dogs’ sleeping pad on the lower back straps the pad keeps it from falling over unless I am packing it.

The first day I had it out I constantly wondered at how little I could actually feel this pack on my back or hips despite the 27lbs I was carrying for 5 days of hiking. Again I was reminded of being gently hugged from behind. I often forgot the pack was there. My legs of course felt the weight especially when climbing up from the trail head, but the pack felt like it was part of me. 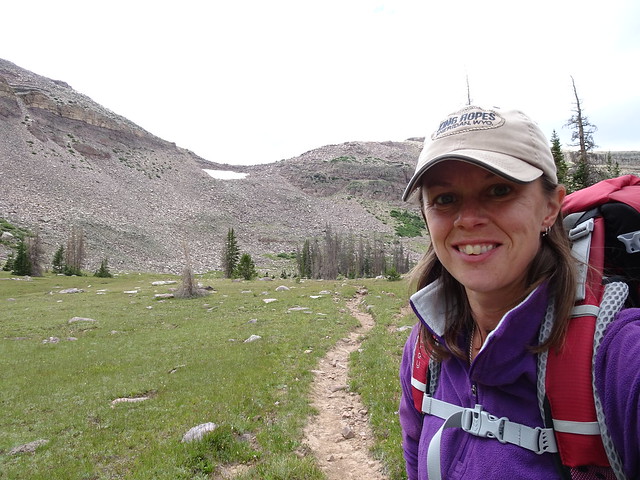 Osprey, in the past, has made some dumb design moves…including hip belt pockets that are impossibly small, compression straps that cover pockets and water bottle pockets that could barely hold a pencil when the pack was full. This pack seems to have addressed most, if not all, the design issues that previously plagued Osprey backpacks. The hip belt pockets are spacious and could hold my good aka not-small point-and-shoot camera in its case, plus chapstick and a small bottle of contact lens solution. On the other side I could fit a king-size packet of M&Ms, my pocket knife, four cheese sticks and at least one other snack of the day.

The water bottle pockets are no longer covered by compression straps, although they do cross the very bottom of the pocket. The pocket is large and bulges, unlike the flat pockets of before, and the elastic at the top is almost too tight but fits and holds a Smart Water bottle in it perfectly. The side pockets have two holes…one on top and another pointing towards the hiker while wearing it so bottles are easily reachable while wearing the pack. The 1L Smartwater bottles I favor were too tall to take advantage of the side openings though as my elbows would hit them but I liked the thought that went into that design.

I found the stretch pocket on the front of the pack a little too tight for my liking and it doesn’t fit very much stuff in it when compared to the Arc Haul’s more spacious but similar-sized (LxW) front pocket where I can carry my tent if necessary. It is a good place to carry tall slender things and that is where I carried my shovel, bug spray, tent stakes, Anker battery and long-handled spoon. 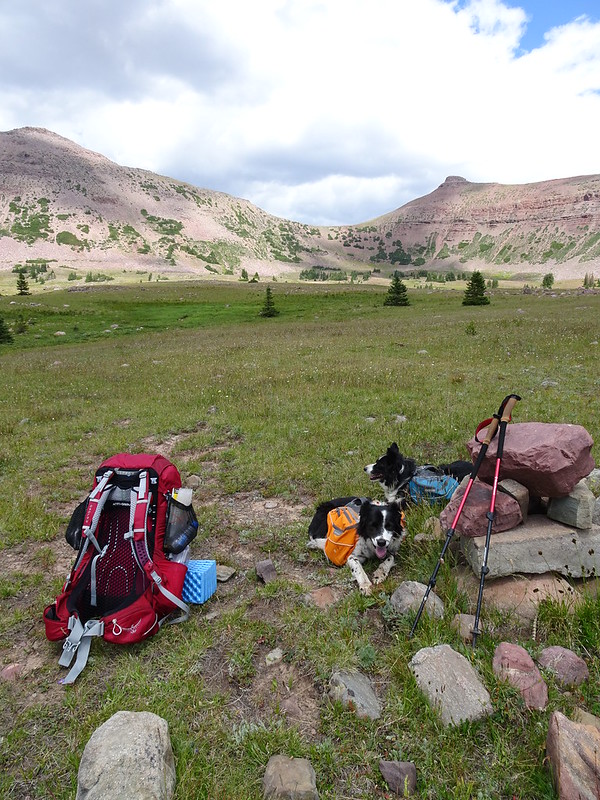 I made two modifications to the pack. First I trimmed down the ridiculously-long belt webbing…when pulled tight to secure the hip belt the ends hung down well below my knees. Secondly I added the two mesh pockets from my Arc Haul to the same location on the Aura…it works if you get inventive. (I did not use these on the Wind River Range trip). I love these top mesh pockets for my water filtering stuff, extra snacks, maps, my GPS SOS device, phone, mini-tripod and FA kit. Eventually I removed some of the straps I found myself not needing and removed the divider between the sleeping bag compartment and the main bag.

I carried this pack again (my Arc Haul had developed another issue despite the broken stays being replaced extremely quickly by ZPacks) on my Uinta Highline Trail trip with 30lbs of gear, food and water and the suspension continued to keep the pack very comfortable at that weight. It also accompanied me in the Wind River Range as the stays ZPacks had sent me were the newer-length for their 2018 packs, not the 2016 model which were longer. It served me well again in the Winds for a 7 days trip and remained comfortable and suitable for the long food carry although it felt like it dwarfed the packs the guys carried (an MLD Burn and a Superior Wilderness Designs 35L). 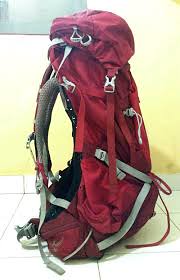 Overall I would recommend this pack despite the slightly heavier weight when compared to other 50L offerings and I almost prefer it to my Arc Haul for comfort.