Our first up-close views of the peaks we would be hiking through, and the too-friendly local wildlife: 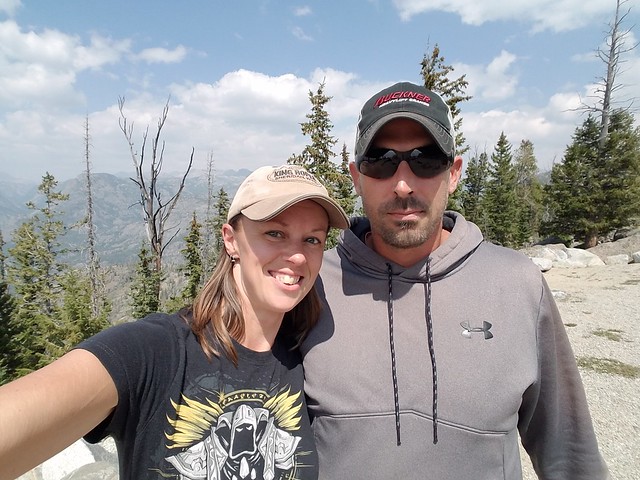 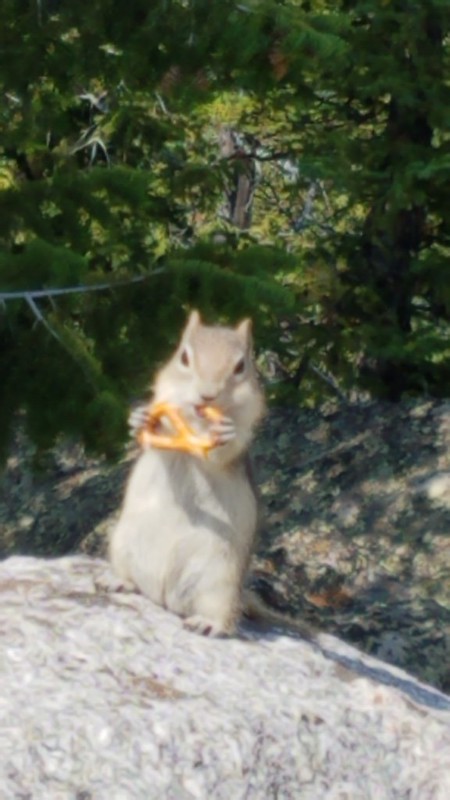 We started pretty slow this morning as we all stayed up too late and enjoyed a few beers but we did manage to make it out of Elk Hart Park by 9:30.

From left to right: Jerry, me, Colby and Dave 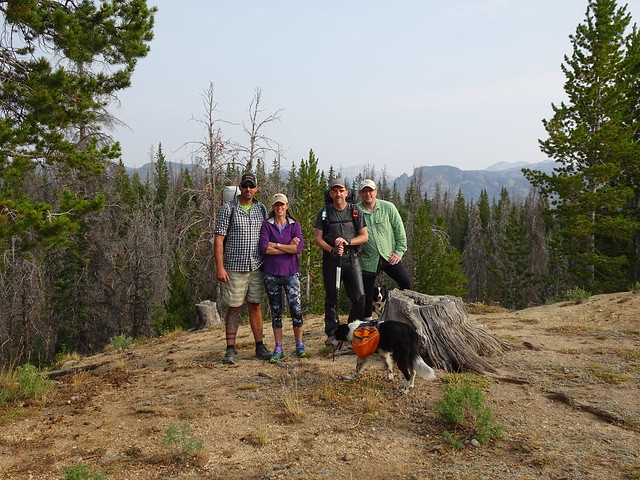 For 3 miles the trail wound down through the pines with some great views to the north. I lead for a while as we climbed down into the valley. In planning this route I knew we had a decent climb ahead but apparently I had missed the steep descent beforehand and by the time we reached the lake and then the creek after a few miles my legs were like jelly and were visibly shaking with the exertion. On the way down we passed a couple from Rochester NY coming up which was crazy as Jerry lives about hour from there. 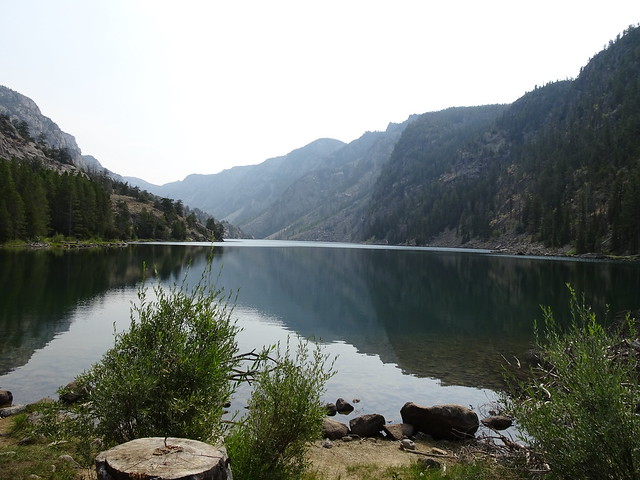 We grabbed a bite to eat Upper Long Lake and took some pictures before crossing a nice bridge over Pine Creek. The sign mentioned the trail was technically abandoned, was not suitable for pack stock and was not maintained. A lot of blow down trees confirmed this. 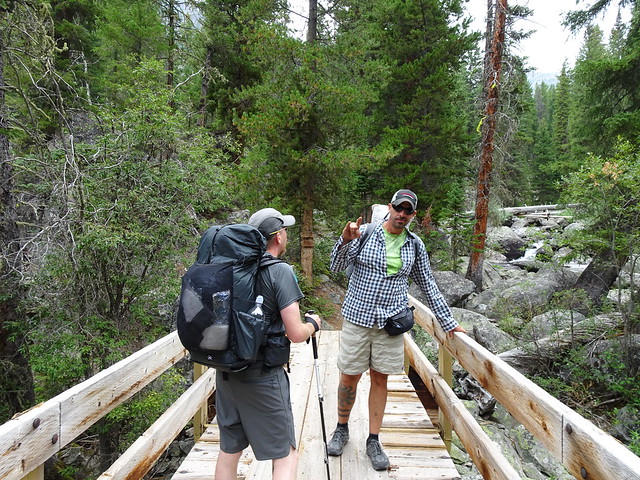 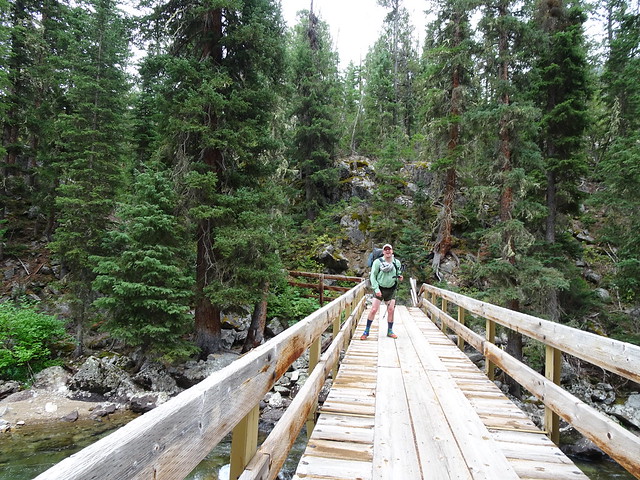 The initial climb wasn’t too bad but once over a low saddle it got super steep and made for some tough going. However in the steepest section the trail was generally clear and easy find. It was here that Dave started feeling the affects of the altitude and of not having hiked as much as the rest of us. We paused to wait for him to catch up several times but it was obvious he wasn’t enjoying himself at all. Words of encouragement were spoken as we stared out at the views from the Crows Nest. 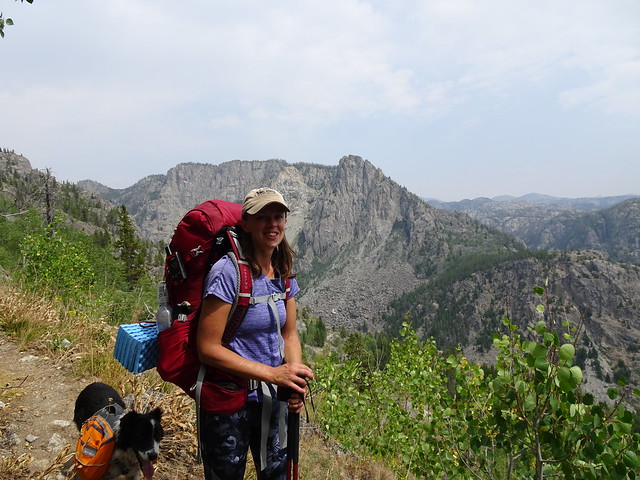 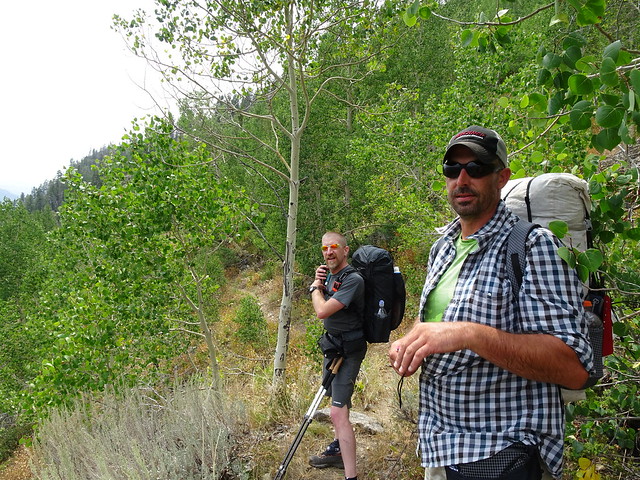 From the Crows Nest onwards the trail leveled out considerably and we were all appreciative of the mostly-level trail for a while. We stopped to get water at a lake below the trail and then it started to rain. It wasn’t serious rain and just a summer shower that last for half an hour but it was enough for us to don rain gear for a while.

And then we ran into a big old moose with wonky antlers that trotted across the trail. He stared at us, we watched him and I was glad Jerry had finally seen one in the Winds. Our last trip here and proven to be utterly wildlife-less with the exception of a deer and a couple of marmots. 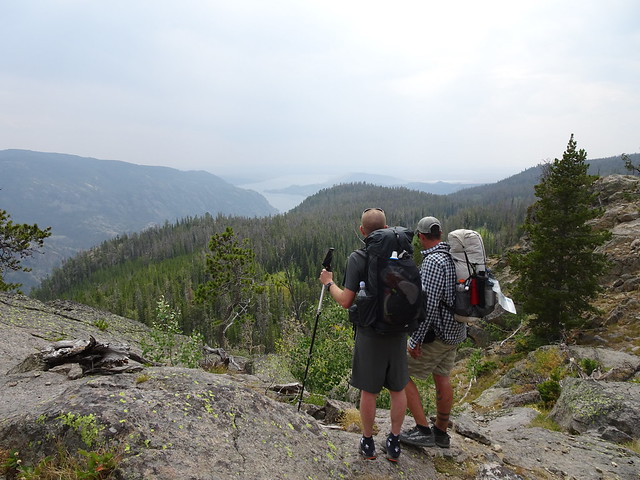 We moved on and had another short climb up and over a saddle. Thankfully this one was nowhere near as steep as the torture we had endured earlier when I had been wondering who the asshole was who’d mapped this route…yup, me.

From the top of the saddle the trees opened up into grassy rock-strewn meadows with yet more stunning views of northern peaks. The trail remained on a moderate decline but was, in most places, level and we finally reached Trapper Lake sooner than I had anticipated we would. This wasn’t a bad thing at all. We took another break and Dave was holding up well…he was definitely hurting though.

From Trapper Lake we had a little over a mile to our intended campsite for the night at Section Corner Lake, a short climb followed by a rocky descent dropped us out on the edge of the lake and we started scouting for a campsite. The first we came across was nice but wouldn’t see the sun early but the other place that looked decent was very rocky and would have been hard on the tents. 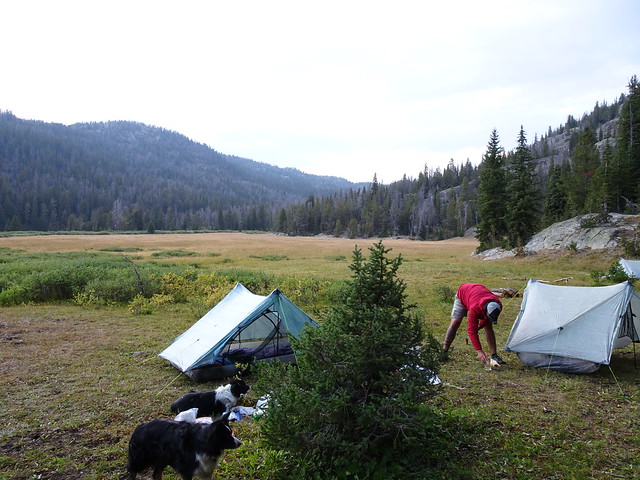 We got camp up quickly although Dave struggled to find two good trees for his hammock. And when you’ve had a tough day the last thing you want to deal with is struggling to set up camp and deal with more frustration. We all ate dinner and hung or tied our food bags away from camp as dusk settled in. We then talked for a while, Jerry, Colby and I trying to be encouraging to Dave to focus away from the pain and be positive about the trail for the next couple of days.

With darkness all around us and the clock saying 9pm we all headed for our respective tents for what hinted at being a cold night.

I slept like a rock and I couldn’t believe I didn’t wake up until 7:45am. I never sleep that late when I’m backpacking, and especially not on the first night. I hollered at Jerry who sounded like he was just waking up.

Dave dropped off my bear bag and said he was heading out shortly so he could get a head start and not slow us down. We showed him where the trail was across the creek and he headed out.

We took our time packing up camp to give Dave a decent head start and left camp at 10am…the latest I have ever gotten out of camp. We backtracked to the lake slightly and followed the trail around the water’s edge before turning north again up the valley. 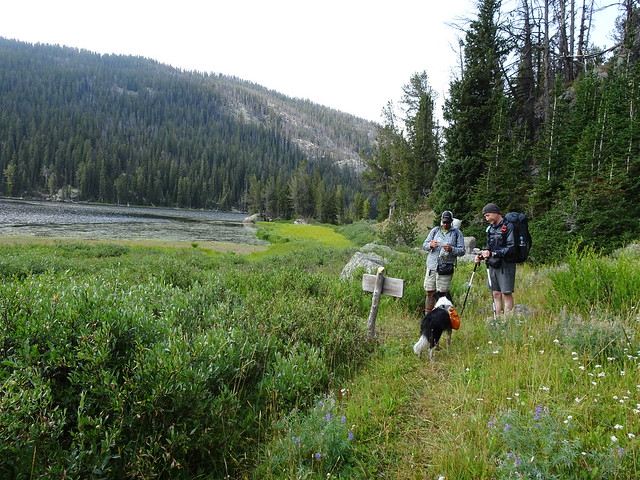 With only a granola bar in my belly I struggled with the uphills more than I had the day before and was soon left behind…something I found myself agreeing with Dave about was that it was kinda demoralizing to be at the back and not with the group. I could certainly understand why yesterday was so hard for him on that level. 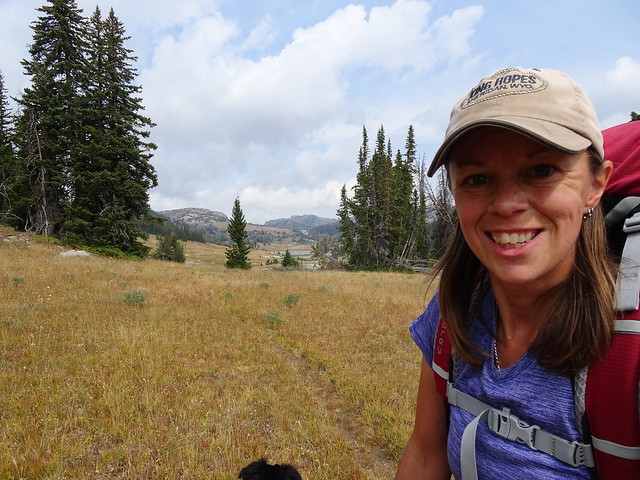 I caught up to Colby and Jerry at Round Lake and grabbed a snack before we headed down. We were keeping our eye out for Dave ahead of us but didn’t figure we would catch him quite that quickly as he had an hour or more on us. 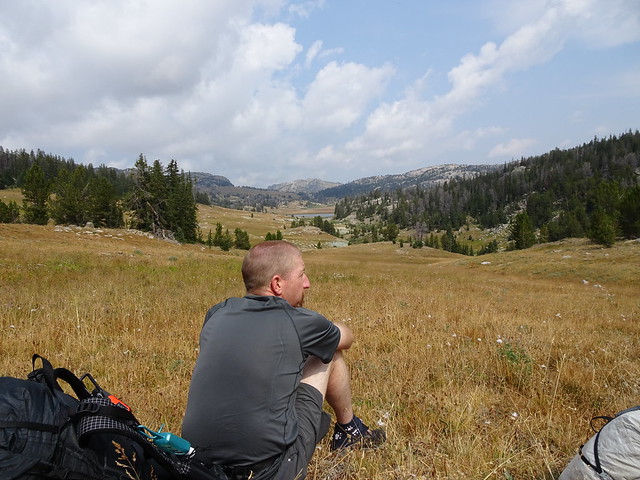 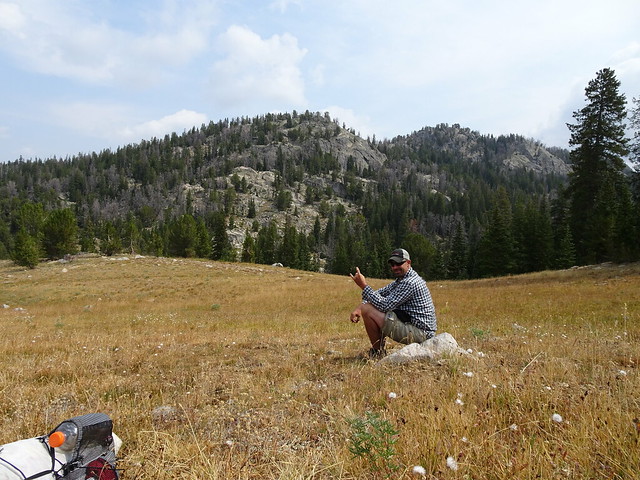 With a few calories in the system we circumnavigated Round Lake and met up with the connection of the original trail we were supposed to take. The sign was on the ground and the only obvious trail was the one we would have come down. We checked the GPS and got on the right trail for 1/2 a mile before making a brief error and having to back track slightly. It was also the time we were beginning to wonder where Dave was and worry was starting to niggle at us, but he still had a decent head start and my pace certainly isn’t speedy. 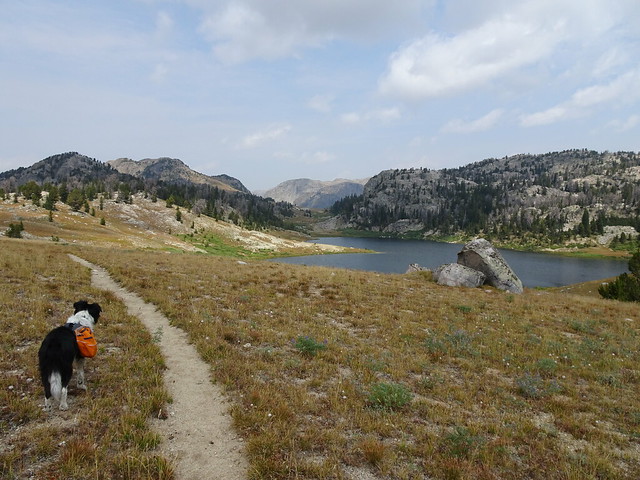 The climb from Round Lake was brief before the trail plateaued and then peered down at Palmer Lake. At the far end we could see two guys and one was wearing similar clothes to Dave. Sadly the person turned out to be a young man fishing with his friend, and not Dave. We were now getting more worried as the guys hadn’t seen a solo guy backpacking by himself on the trail. 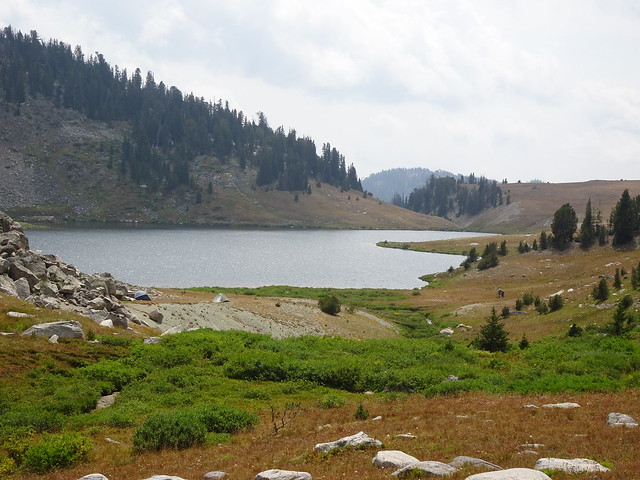 We made slow progress to the top of the hill and then enjoyed they awe-inspiring views of Palmer Creek Canyon. 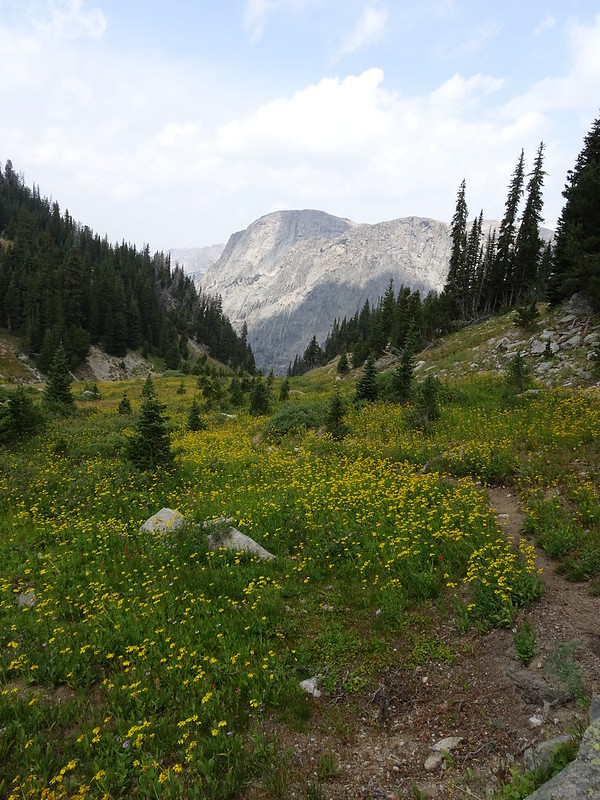 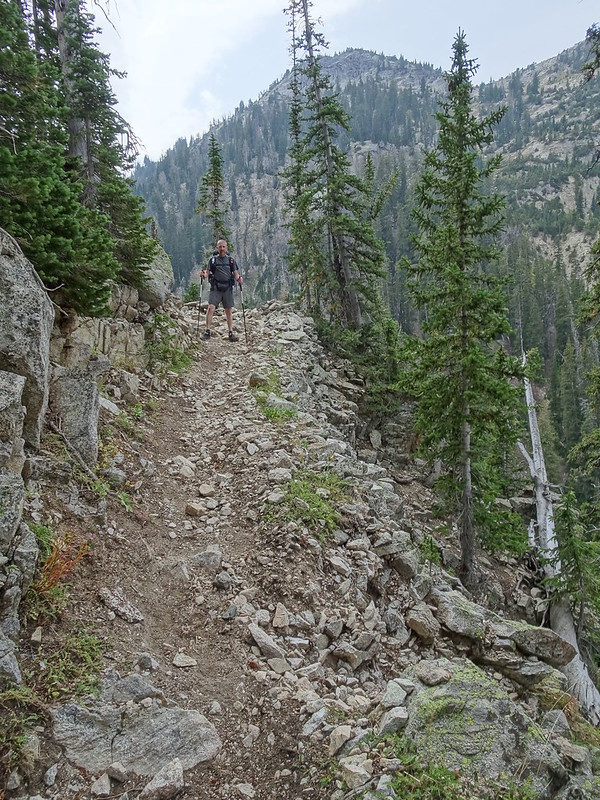 We descended amid stunning wildflowers along a steep and rocky pass to a low, rock-bound creek that showed obvious signs of being a raging torrent at other times of the year. It was this creek we followed for a while until losing the trail in the marshy areas where there were few signs and only hoof prints to go by. 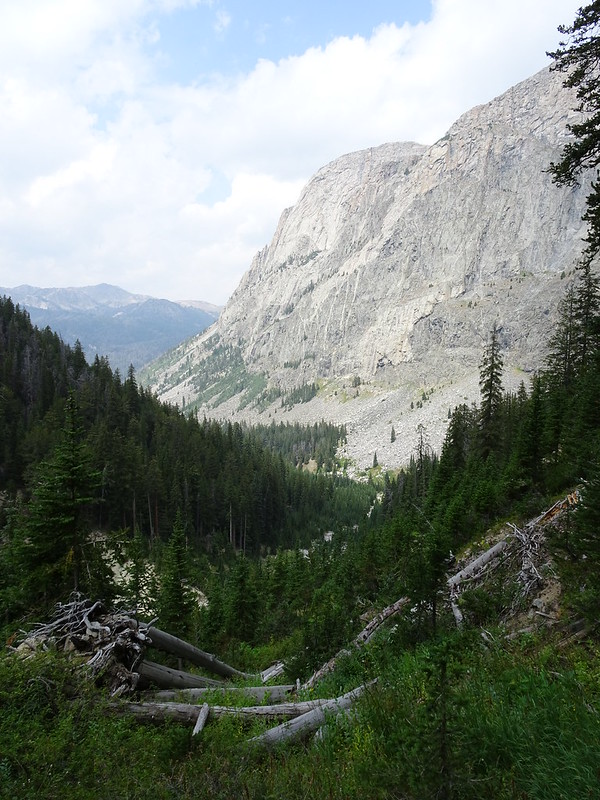 With the aid of the GPS again we managed to keep on track until we found the trail again (after a ridiculously steep climb up a tall embankment) and continued our way down the valley with magnificent walls of towering granite that made us feel extremely insignificant ahead of and beside us. It was also through here that we came across our second and third moose of the trip as we disturbed a momma moose and her calf. She eyed us with uncertainty while the calf did what his instinct told him to do and ran (or trotted) away up the hill. 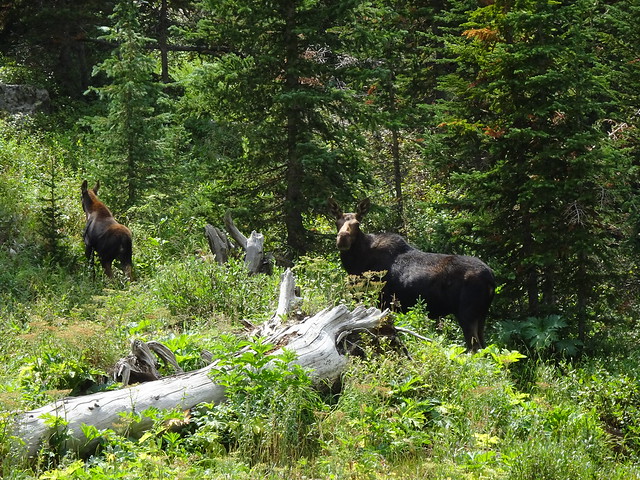 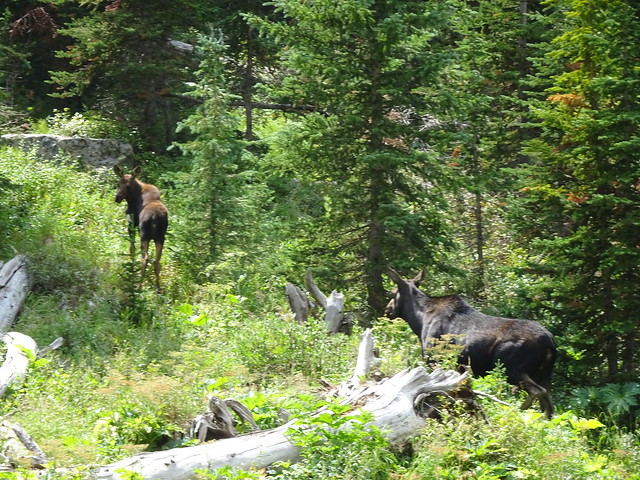 We passed a couple of guys camping prior to the trail intersection and stopped to ask if they had seen Dave, and gave them his description. They hadn’t seen him and some serious concern was starting to set in. With no way to know where he was; if he was on a different trail, if he was backtracking, or even if he was truly lost we were starting to question if and when we would need to hit the SOS buttons on our GPS units. 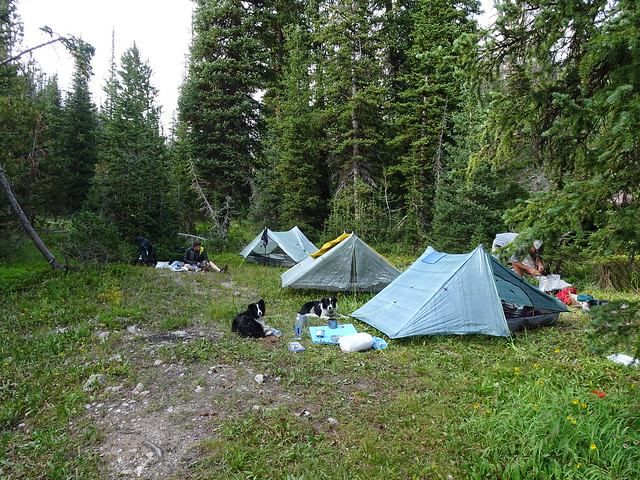 With tents set-up and dinner cooking our thoughts were very much on Dave and what had happened to him. Colby and I both theorized that he had taken a wrong turn at the badly-marked trail junction north of Round Lake and had followed the trail back around to Trapper Lake as the rest of the trails had been obvious and well-marked…and that was the place we could easily have made an error without a good map.

We continued talking as the sun sank behind the mountains and finally, just as Colby was about to turn his InReach off we got a message from someone at The Great Outdoor shop to say that Dave was fine and would be hiking back out the same way we had hiked in, and going back to Elk Hart Park. We all breathed a huge sigh of relief and knew we would all sleep better for knowing that. We felt bad but there was little we could have done at the time.

With dark clouds drawing in and a few raindrops starting to hit us we all withdrew to our tents for the night and listened to the thunder grumble away to the south.