We got out of camp a little earlier than planned and were covering the last couple of miles to the top of Porcupine Pass (the second one of the same name in the less than a month for me) by 8:45am. 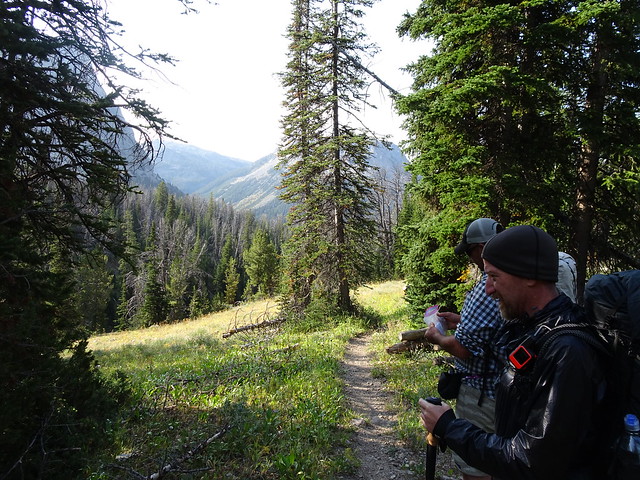 The first few switchbacks were tough but the trail soon opened up into a gorgeous alpine valley surrounded by towering peaks of granite on all sides and a fabulous view of the 2000ft descent we had made yesterday, and the 2000ft climb we were now doing. 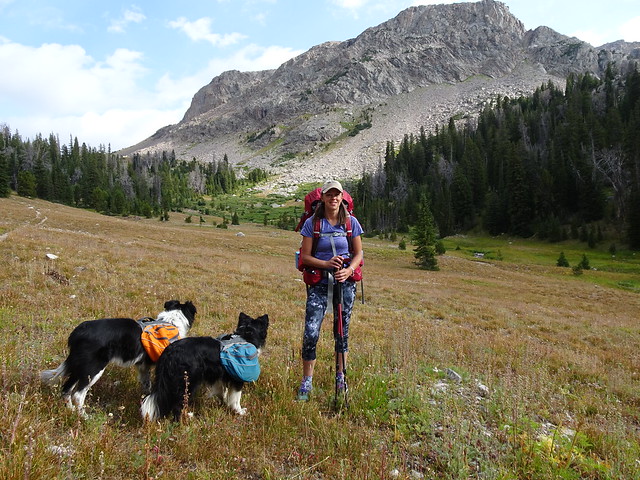 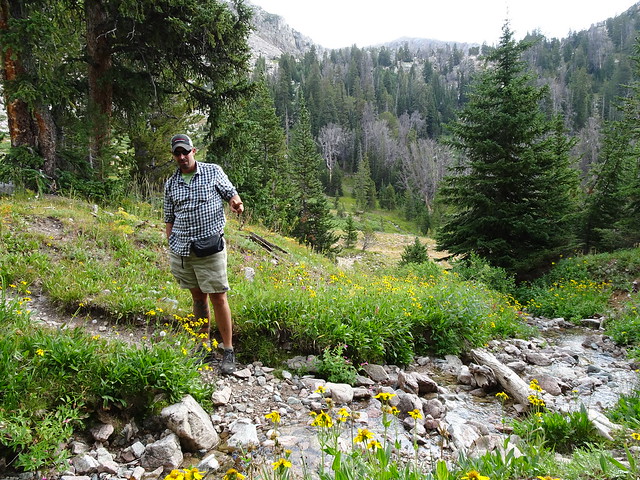 At the end of the valley we stopped for a quick snack break before the final switchbacks to the top. The weather was partly cloudy and perfect for climbing in open terrain and we stopped to soak in the next valley of absolutely stunning beauty. 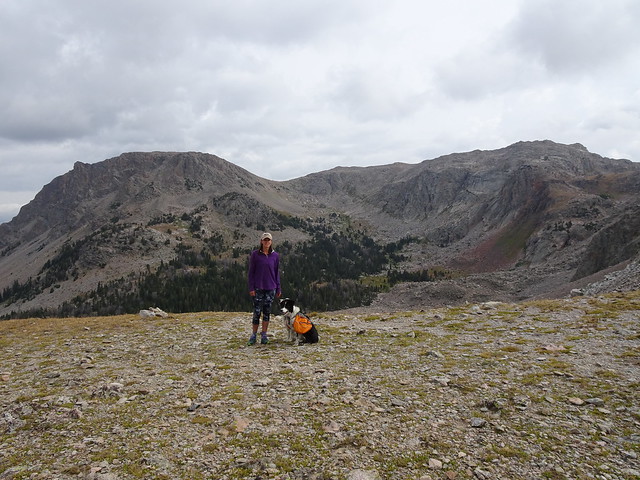 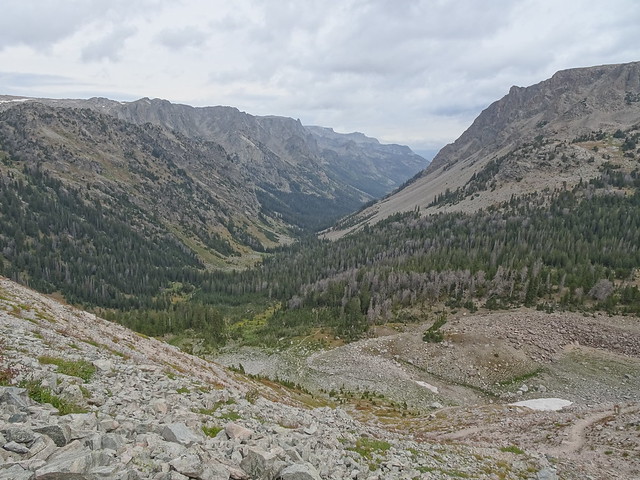 Pictures were taken in abundance before we started down the nice and not-too-steep switchbacks on the north side of the pass. I kept stopping to take pictures, not just of the views ahead but of the pass and Jerry and Colby behind. 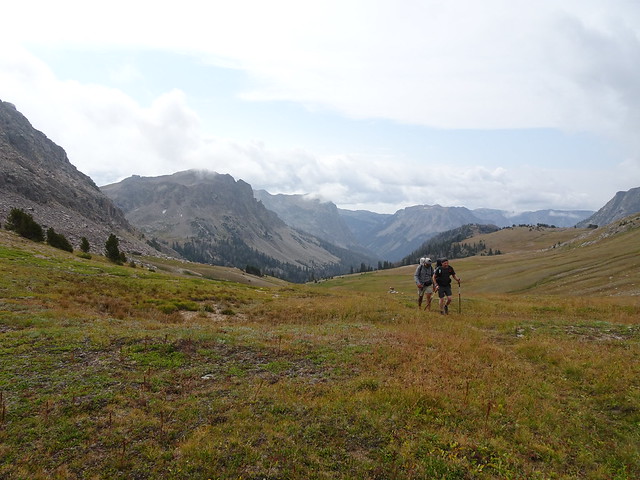 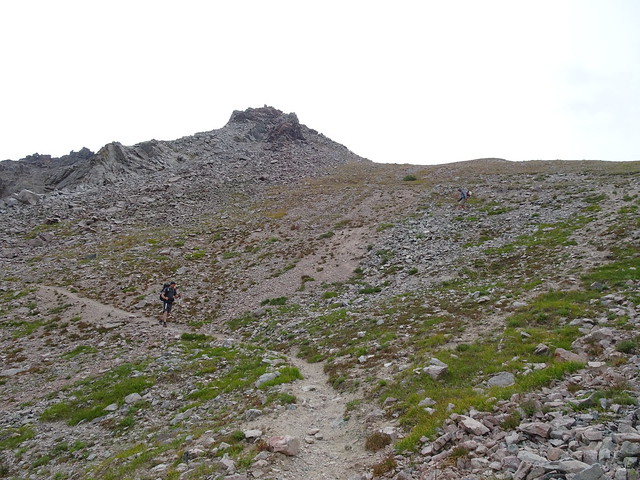 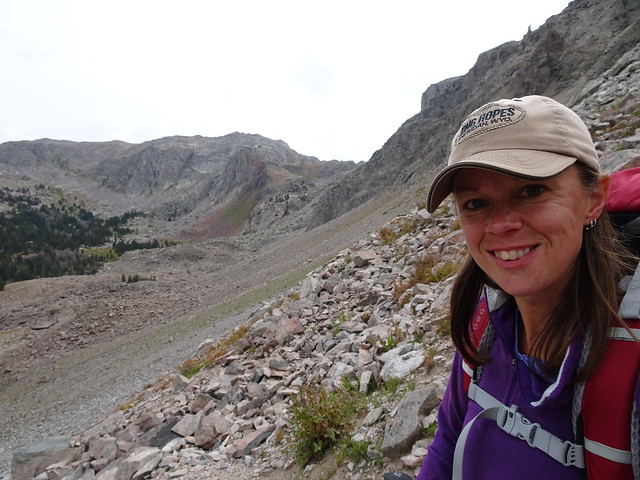 We filled up with water at the first creek crossing, grabbed a snack and I pulled my poncho out and stuffed it at the top of my pack…black clouds to the west looked pretty ominous. We followed the trail into the trees and within five minutes we were feeling the first raindrops and then hail. We all donned rain gear quickly and continued down the trail. The hail petered out and soon it was a light off again-on again shower. But eventually it got worse and the rain became more persistent and was less like a passing rain shower and more like a blanket of wetness. We hiked on and thunder grumbled around us. 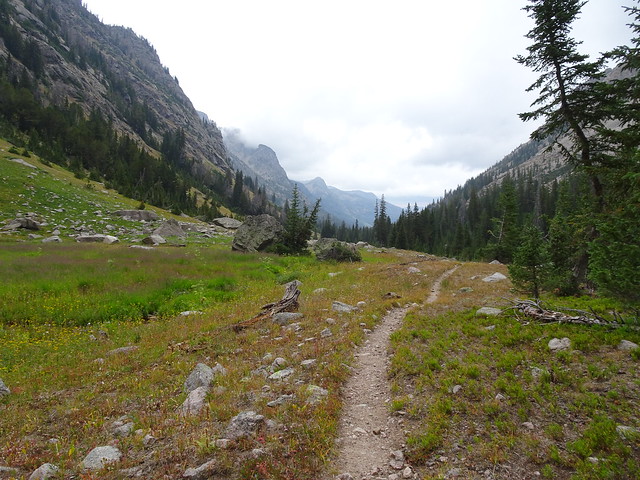 With a large pine tree providing a dry respite just off the trail we took a break. I was doing okay but wasn’t sure how I would do if the rain continued. We waited for 20-30 minutes in the shelter of the tree before I started getting cold and was beginning to shiver slightly. Despite the rain I knew I had to get moving to stay warm. 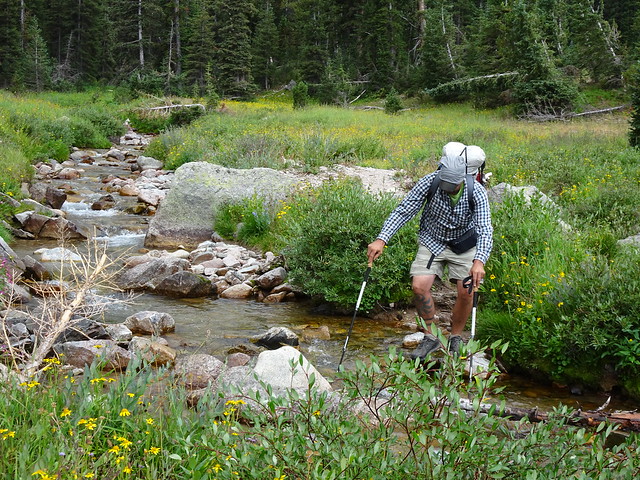 Despite my poncho keeping most of me dry my hands were getting wet and they were going numb with the cold. And wet plants drenched my feet. I was starting to worry about me staying warm and what we would do as a group if the rain continued…I knew if it didn’t break soon I would be facing some serious issues. Jerry kept a check on me to make sure I was doing okay (he admitted later he was worried about me too).

Finally after another 20 minutes of steady rain (not torrential downpour thankfully) we started to see a break in the weather. Sadly there was a creek crossing that had only one log for the crossing (and it was a no go as it was wet and slippery) so with already soaked and frigid feet I just barreled through the water, cussing the whole way. And on the other side of the creek, just as we reach a beautiful open meadow and the trail junction to Green River Lakes (30 miles from our starting point), the sun came out and immediately began to warm and dry us. I was beyond thankful. 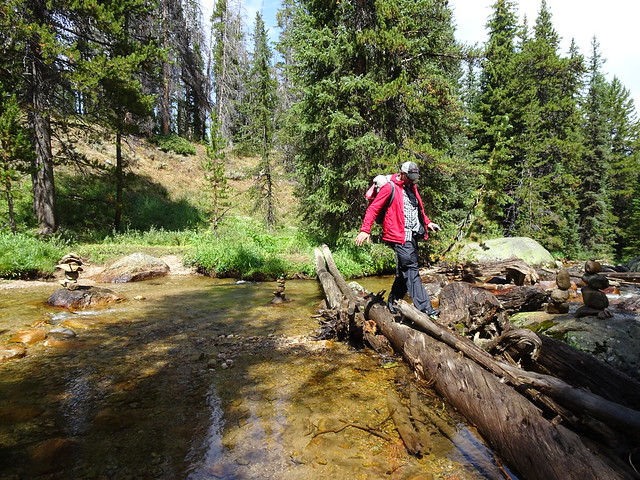 We crossed another creek, thankfully by log bridge this time, and covered the final switchbacks to Green River Lakes and crossed yet another creek. I took my shoes off for this one as my shoes were finally starting to dry and I wanted to keep them that way. Of course there was a log at the crossing that I had completely missed but it gave me a chance to get my now-stinky feet and socks clean. As we crossed the meadow at the southern end of Green River Lake we got our first glimpse of Squaretop Mountain. 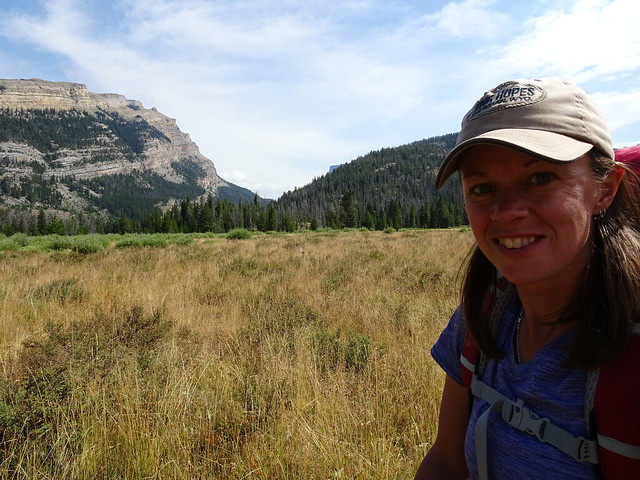 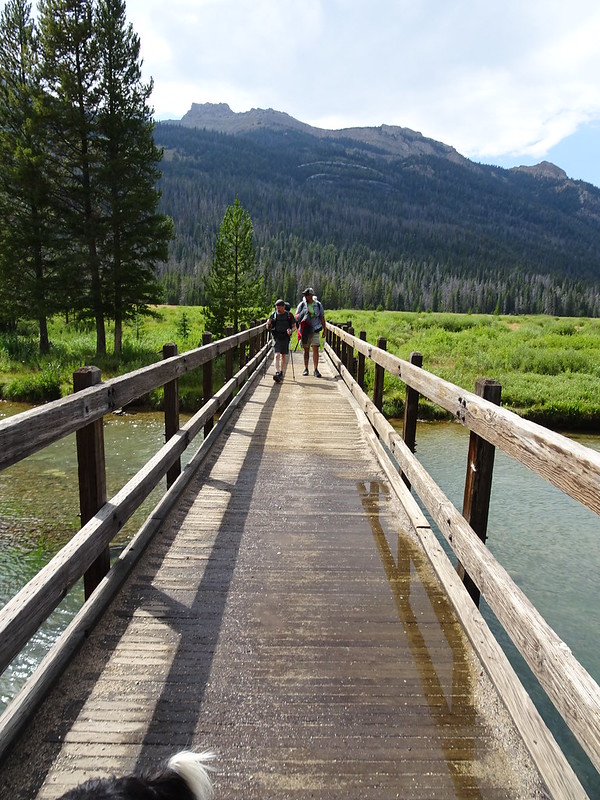 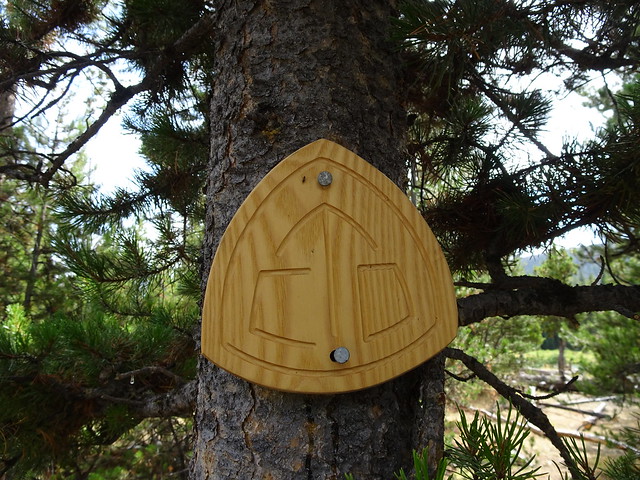 We finally turned north on the Highline Trail aka CDT (Continental Divide Trail) and circumnavigated the lake, all the while getting some quite impressive views of the aquamarine-colored lake and Squaretop Mountain. The trail was mostly level and we made good time, conversing with another hiker briefly and asking about camping spots ahead. He mentioned one but also that another group of six guys had seen a bear sow and cub in the area ahead of us…thankfully it was a black bear and not a grizzly. 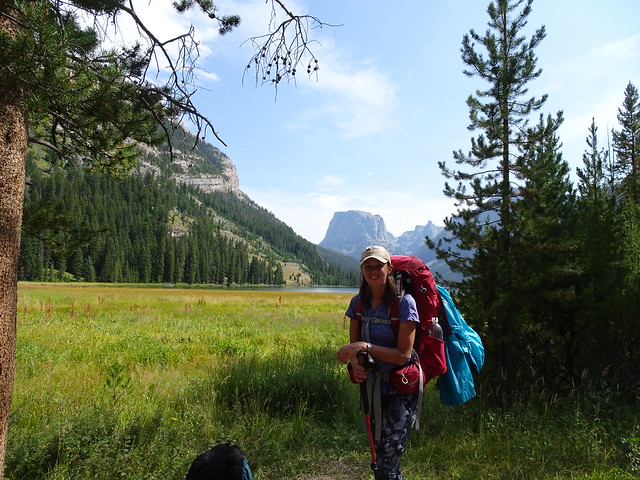 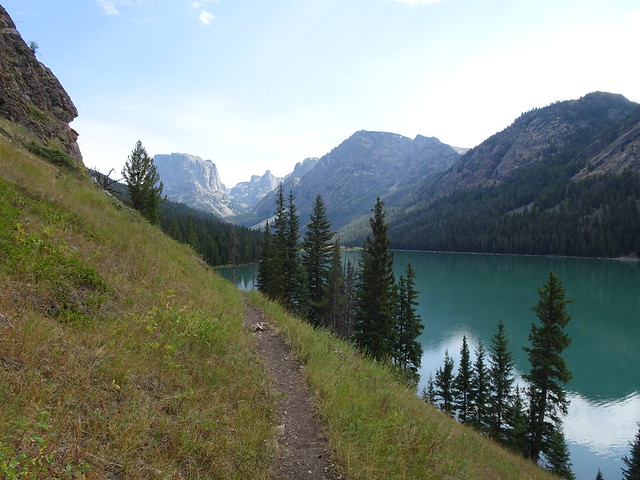 We hiked on a short way and found an amazing campsite 100 yards off the trail and just below Squaretop Mountain…and probably one of my favorite campsites of any trip in the Winds so far (including last year’s trip). We were watching the weather closely and wanted to get camp set up before any more rain came in. 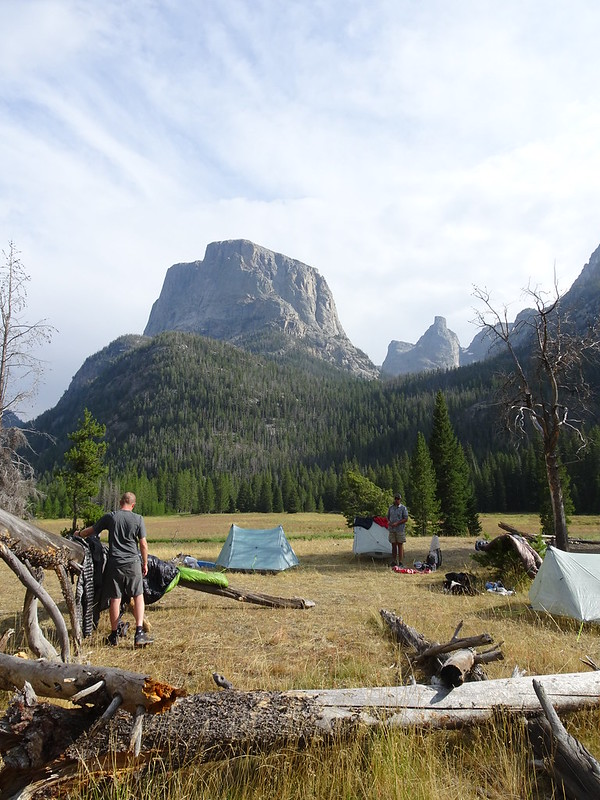 We got settled and ate, and most stuff had dried out from the night before when the rain, lightening and thunder hit about 6:30pm. We scurried for our tents. Thankfully we had been watching the clouds encroach on the valley and all gear had already been safely stowed in protective DCF cocoons.

Rain and thunder continued for almost two hours before finally abating at about 8:15pm. We were glad to see the end of it and made a move to hang our food bags before we completely lost the light.

We awoke to mist and fog shrouding everything, including our tents. It would break briefly and then come back in and it certainly provided for a couple of pretty pictures of Squaretop Mountain. But it was not a morning that was conducive to wanting to crawl out of warm sleeping bags and even the dogs were shivering a little. 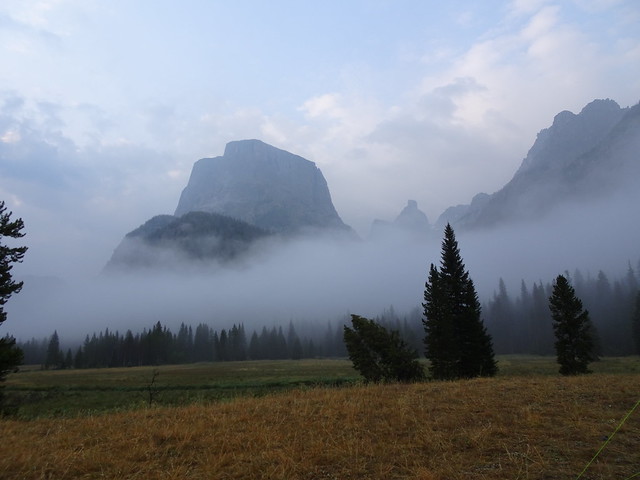 Everything was damp. Even my camp towel couldn’t get my tent dry this morning although it got it close and the dogs soon warmed up as I let them out of the tent and they enjoyed 20 minutes of running and playing together.

We eventually got on the trail and I was still wearing my fleece base layers and gloves to stay warm. The sun was starting to break through a little and after a mile or so I packed away my gloves and base layer top. 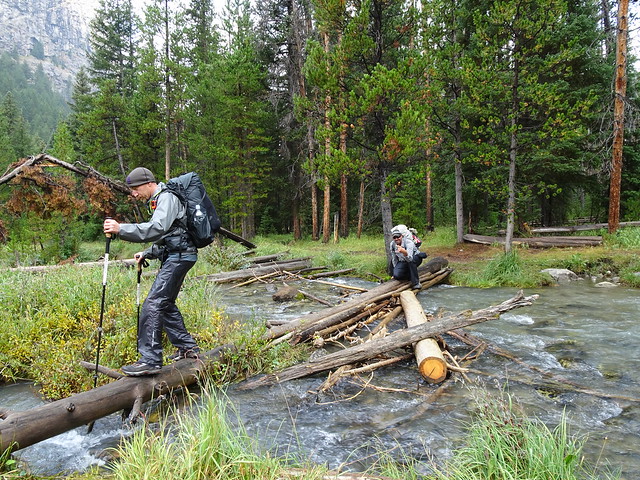 The trail continued for another four miles on a pretty level trail beside the meandering Green River. We crossed a couple of fairly wide and deep creeks that required some serious balance and careful stepping to stay dry on rocks or logs. Jerry, who doesn’t hike with hiking poles, had the toughest time and started crawling across the logs on the first crossing. On the second crossing I had the guys hold the dogs back so they didn’t try to follow me immediately as it was a precarious crossing. Kye, as always, tried to rush across the log and slipped a couple of times but the double log bridge meant she didn’t fall in. 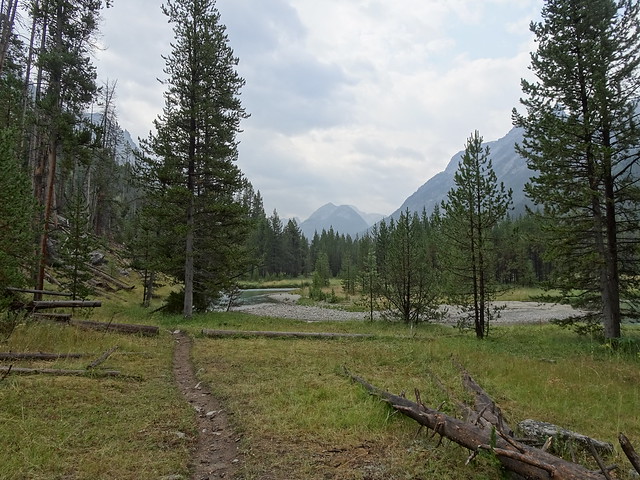 Eventually the trail split and we crossed the now-raging Green River via a foot bridge and climbed above it. The sun was beginning to come out more consistently and make the day warmer, finally…we were all glad for the warmth. Another mile and a half put us at the base of the switchbacks and before the climb I packed away my base layer pants; it was still chilly but I didn’t want to sweat in my sleeping clothes. 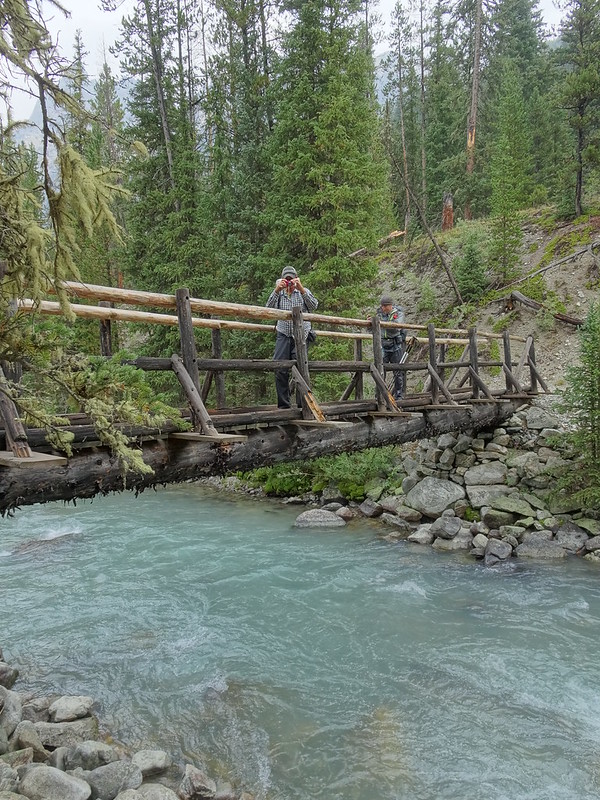 The switchbacks were a pretty easy climb and we stopped for views of distant waterfalls and peaks as we hiked up, eventually crossing Trail Creek were we ran into the six guys on a guided family trip who had seen a black bear sow with her cub not far from where we had camped the night before. We chatted for a while and climbed the final switchbacks to Trail Creek Park. 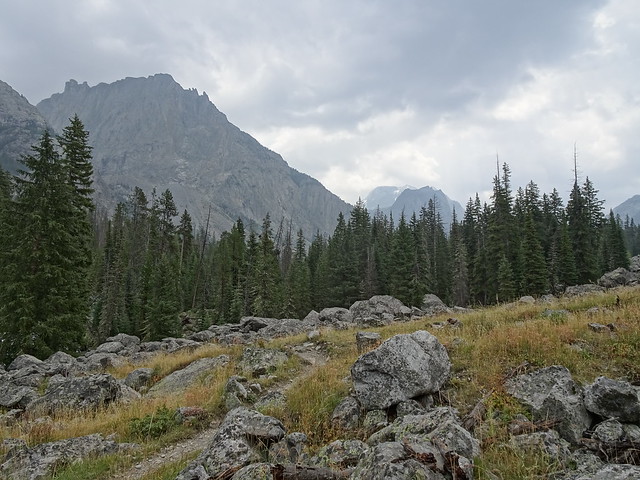 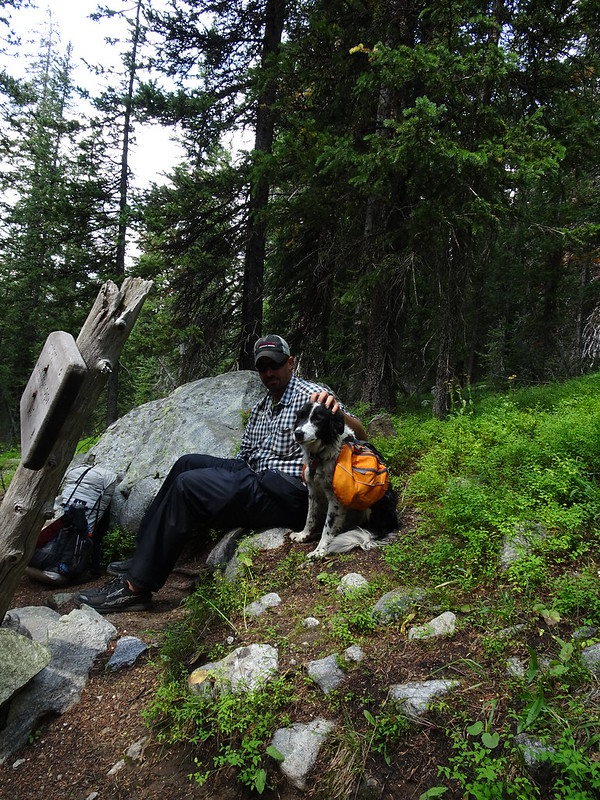 Soon the trees deserted us and we we surrounded by grey boulders, green meadows and fields of talus all interspersed with reds, golds and blues of wild flowers. It was a beautiful sight and just kept getting better as we hiked up through the valley, each step providing a better view. 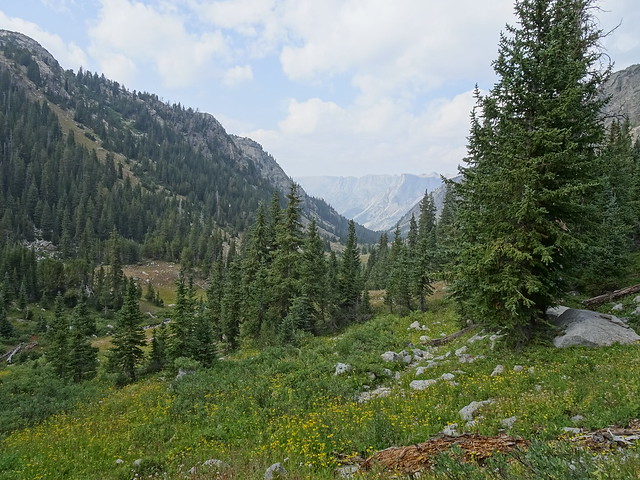 Eventually, after much stopping to take dozens of pictures, we reached the plateau that is Green River Pass. It was not an up-and-over pass like I was expecting but was an open-ended expanse of rocks, emerald carpet and alpine lakes glistening in the now-warm sun. It was stunning. 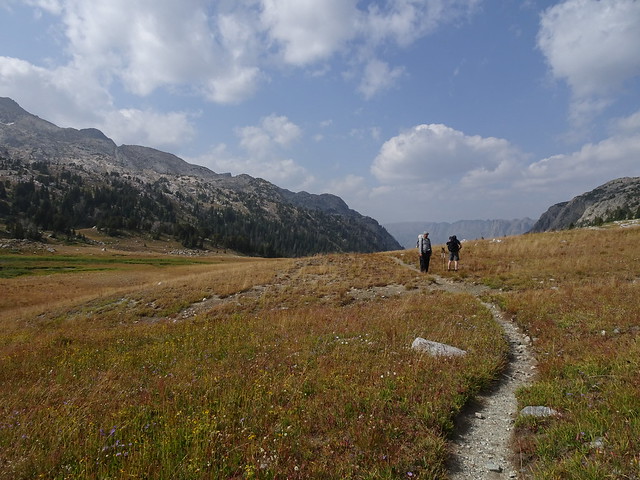 We reached the end of the plateau and looked over Summit Lake towards a grove of trees that looked like a good place to camp. We were high and exposed and wanted a little protection if a storm came through. But the skies remained clear and the sun, despite the wind and chilly air, was very welcome. 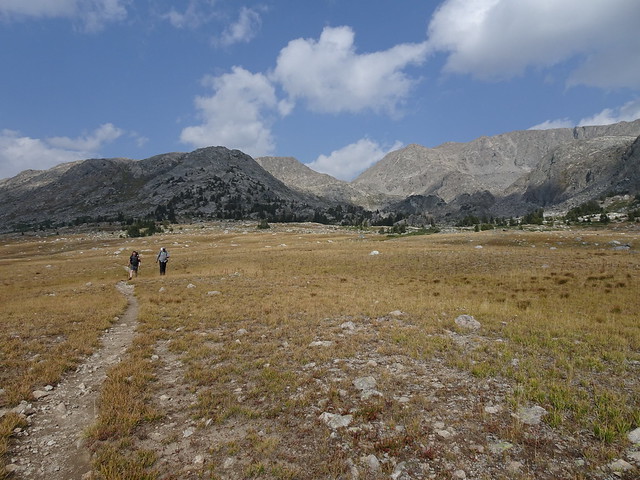 We had camp set up quickly so everything could dry and then sat for a while and enjoyed the view as the sun set and the moon rose. Soon it was too cold to remain outside of the tent and we all departed for bed. 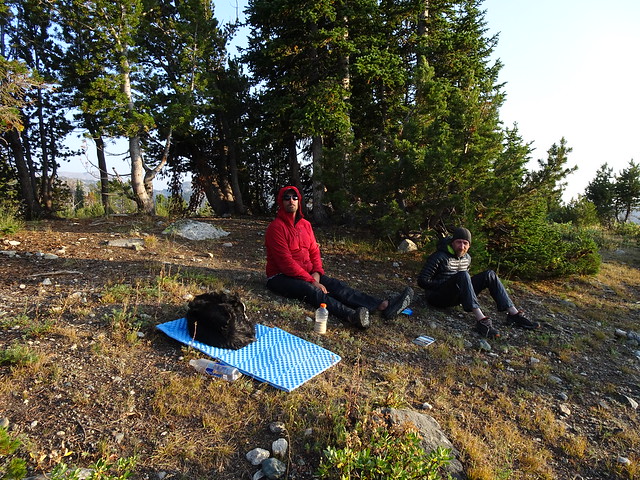 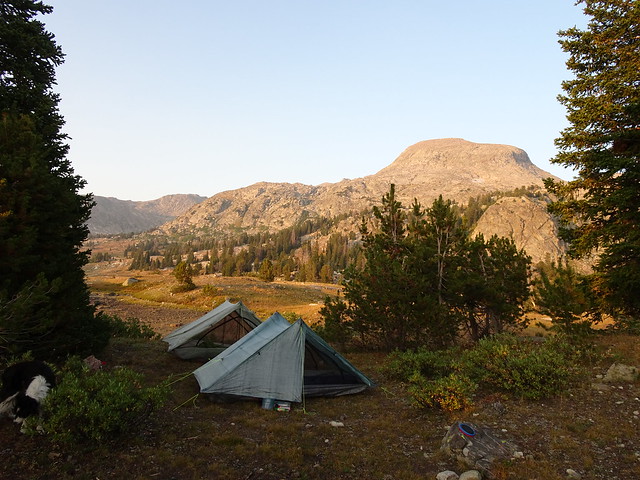 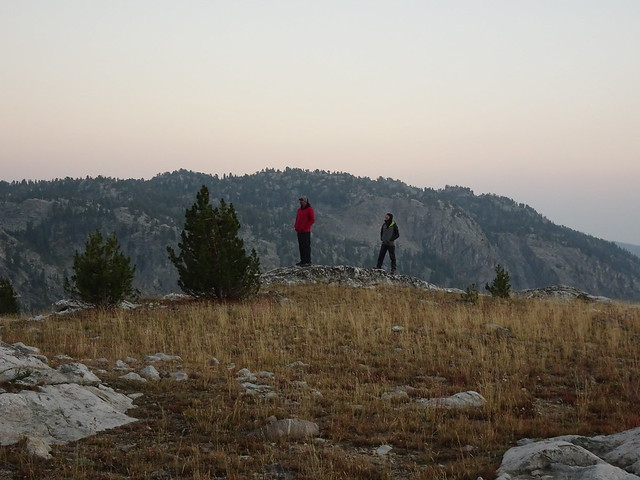