Lots of traffic out of the south-east at rush hour made for a longer-than-anticipated drive to Birmingham where I spent the night in a lovely fellow Adventure Queen’s driveway (you’ll have to Google who the Adventure Queens are) who had offered me a place to park as a stop over on Friday night. However not only did I park for the night but I also enjoyed a couple of hours of great conversation and a glass of wine.

Sleep evaded me most of the night, and what sleep I did get was fitfull and restless. I was up with the birds and heading north a few minutes after 5am. It had rained during the night and rained off and on during the 5 hours drive to Glasgow until finally settling in 30 miles south of the city. I wasn’t feeling good about the impending hike in rain.

I dropped off a resupply box with my return shuttle driver and found a parking space at the train station…the place most recommended by, well, everyone.

With the drizzly rain still lingering I knew I’d have to suck it up so I started getting ready and a little before noon we were standing at the obelisk at the official start of the West Highland Way. It felt a little surreal to be standing there, having seen this icon in so many pictures and videos of people who had done the trail before me….similar to the what I assume it must be like for those at the southern (or northern) monument of the PCT. 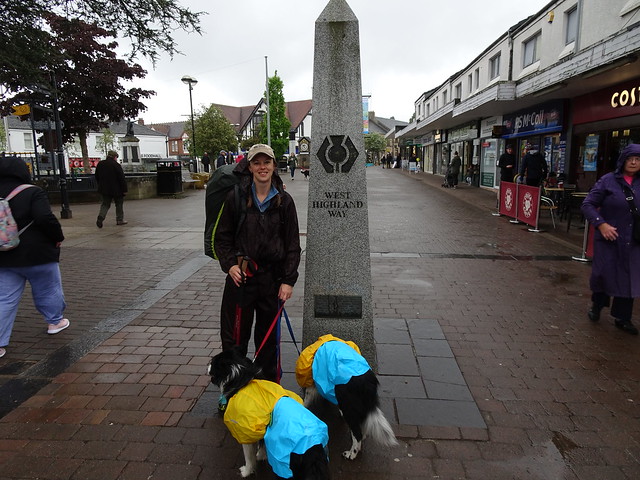 We followed the signs and were quickly away from the town center and walking well-gravelled paths alongside the creek. I had worn my full rain suit but was soon dying of heat despite the coolness of the day and the rain. I switched out to my poncho and was quickly feeling better. 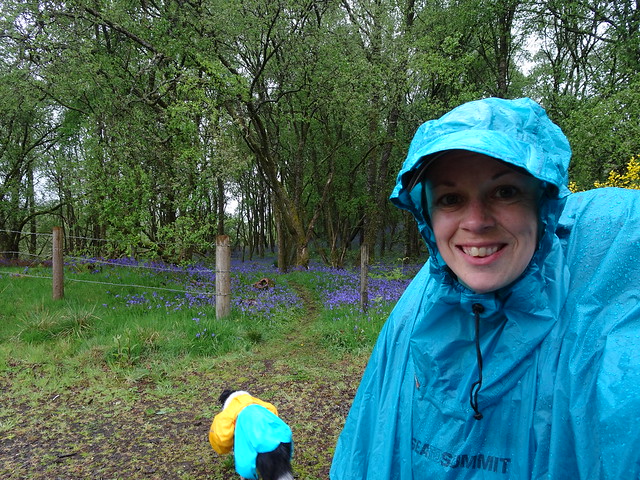 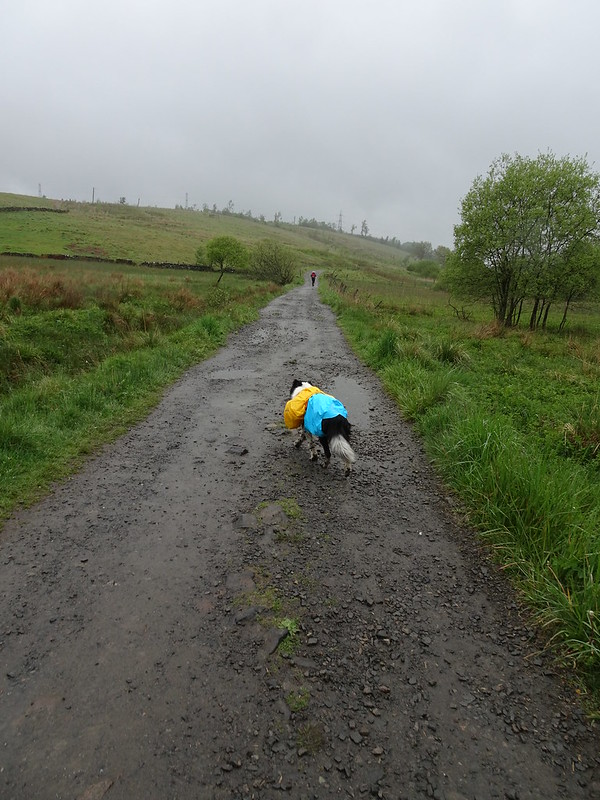 The drizzle continued for a couple of hours and obscured the views that should have been stunning. It was hard to look around much when I had my head down most of the time trying to stay dry. The dog’s raincoats were doing their job for the most part but I quickly realized that my measuring had been sub-par and they were too short for their bodies. 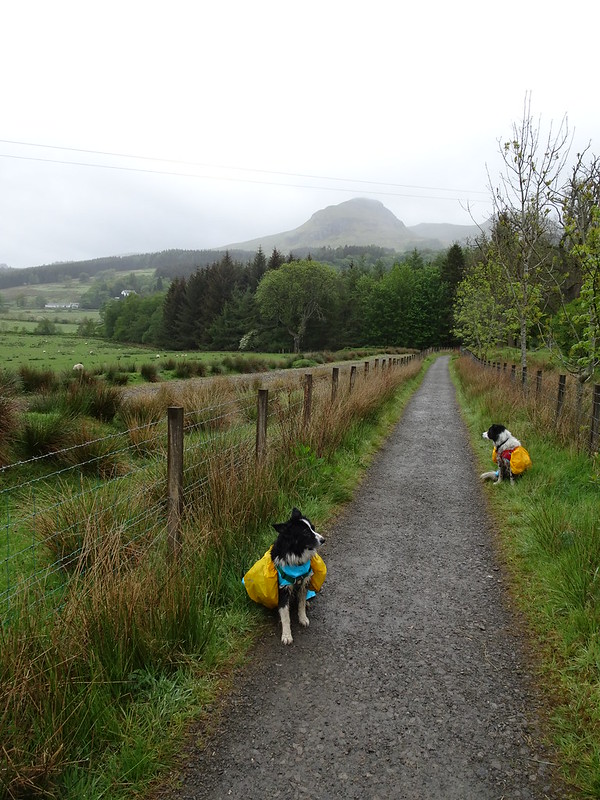 We meandered mostly through farmland and crossed a few roads, finally enjoying some rain-free hiking tine during the afternoon which held until camp. 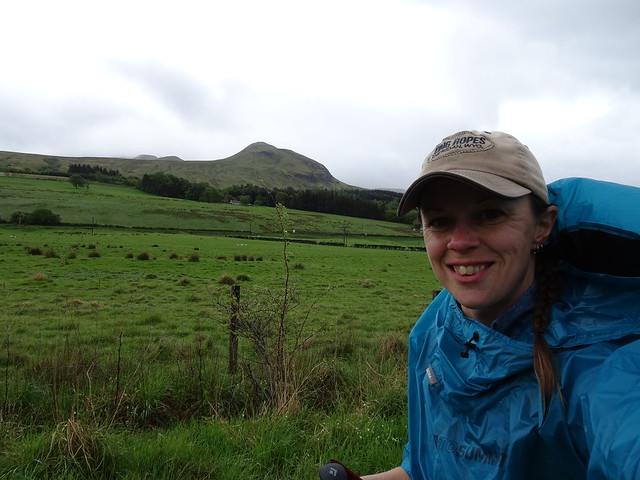 The miles flew by under our feet as the trail was mostly a wide travel track with little elevation variation and easy to walk on. Livestock surrounded on either side and despite the lack of views I stopped to appreciate the little things, like the stunning pink flowers alongside the path, or the first views over Loch Lommond framed by shrouded peaks and vivid yellow gorse. 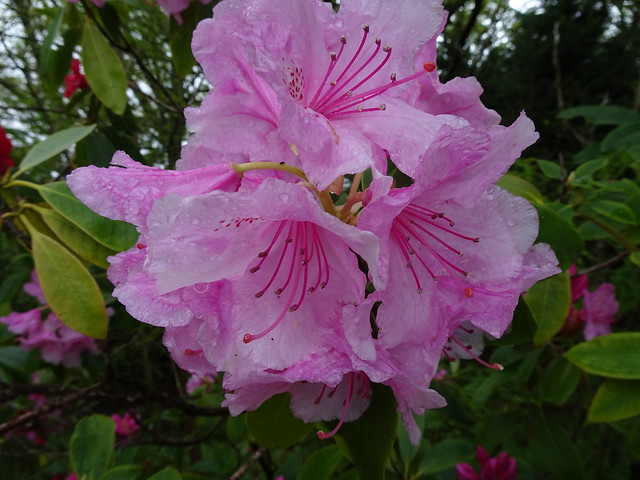 As we hiked up the road towards we encountered this cool-looking bridge but it was only when I got closer to it and peered intently at the gaping black maw that I saw how cool it actually was. 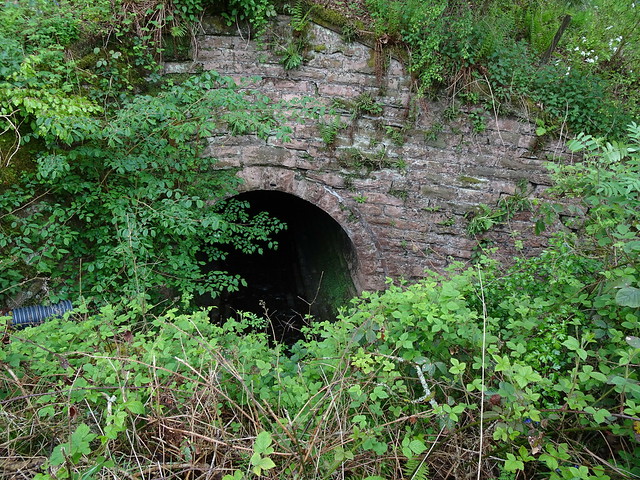 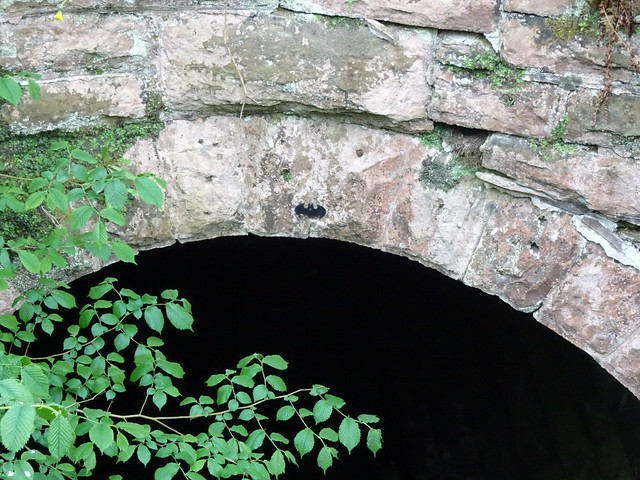 I had encountered a few backpackers and a handful of hut-to-hut (or B&B/hotal to hotel) hikers, and many backpackers peeled off at Dryman Camping, a mile or so before the town. But it was way to early to stop…not to mention I find it silly to pay for camping when there’s so much of it available for free in Scotland. 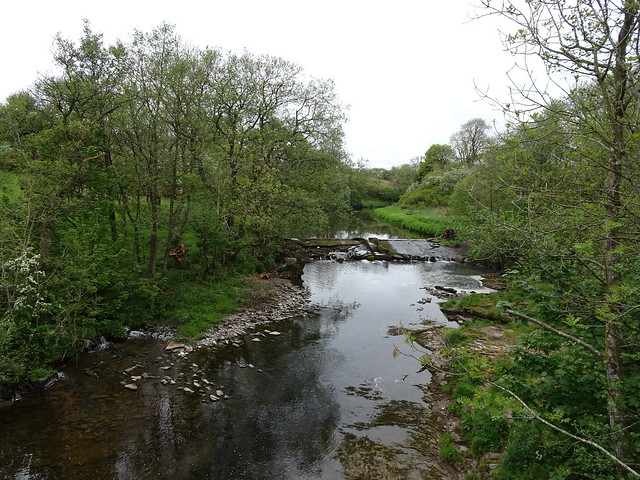 So on I went. I had intended to blip into Drymen for water but a convenient creek at the turn off saved me the extra mile. It was quite chilly and my hands weren’t happy with dealing with cold water and the breeze. I filtered 3 liters as I knew we’d be dry camping…and dang was my pack suddenly very heavy, which wasn’t helped by having to leash the dogs through a sheep field and then on a short road walk. 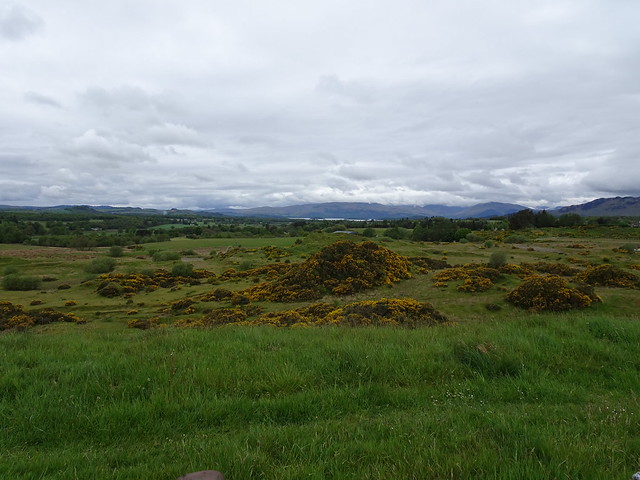 Finally we were in an area where we could camp and I started looking for a good, sheltered spot. The first one was promising but the neighboring tent just looked a little sketchy and didn’t give me positive feelings…it wasn’t a backpacking tent and I didn’t fell comfortable with staying there.

So on I went for another half mile before settling on another sheltered spot in a large stand of pine trees. Two other tents occupied a couple of spots but there was plenty of room. I struggled to get my tent up as it is difficult to figure out the correct orientation for it, especially in a tight spot, but I got it done. 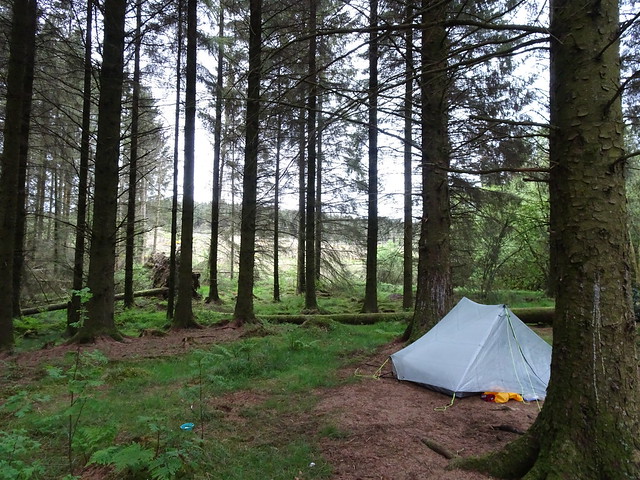 One of my neighbors came over to chat as I was making dinner and the midges just swarmed us. I doused myself in Smidge (something that was SWORN to work, so I didn’t bring a headnet) but it was useless so I quickly ate, and walked (to keep from being eaten myself) as I chatted and then be both headed for the safety of our tents to get away from the flying evil midges. I was really glad to have brought my Kindle but was kicking myself for not having brought the West Highland Way guidebook.

I slept fairly decent last night…once I actually got to sleep. Initially I was lulled into relaxation by the gentle sounds of light rain tapping on the tent. It was quickly followed by the sounds of loud voices, distant fireworks and neighboring campers making constant bird calls (obviously fake). I awoke to the dawn chorus again but covered my head with my coat and fell asleep again until 7am when the light sound rain was enough to break my slumber.

I packed as much away as I could inside the tent before emerging just as the rain was tapering off. The tent was soaked and cold to pack away but the midges were already out so I quickly packed it away without even bothering to dry toweling it off a little. I was missing having even a little breeze to keep the buggers at bay. I didn’t realize how much water was held by the tent until I put it up again…no wonder my pack felt so heavy. 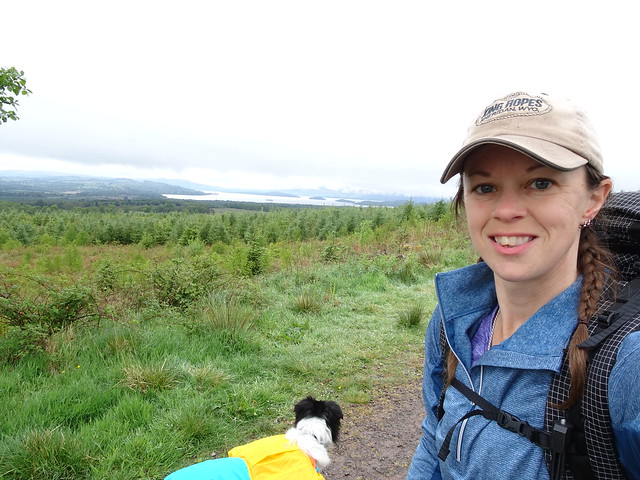 We followed the forest road north once again and said “good morning” to a few groups of other backpackers. We then had to turn west and take the road alternate as it was still May and Conic Hill was closed to those with dogs through April and May for lambing. And while it was a bit of a wrench not to do the whole route, doing the rest of it with Kye and Cody more than made up for it…not to mention that it was a steep climb and was socked in by clouds so there would have been no good views from the top. 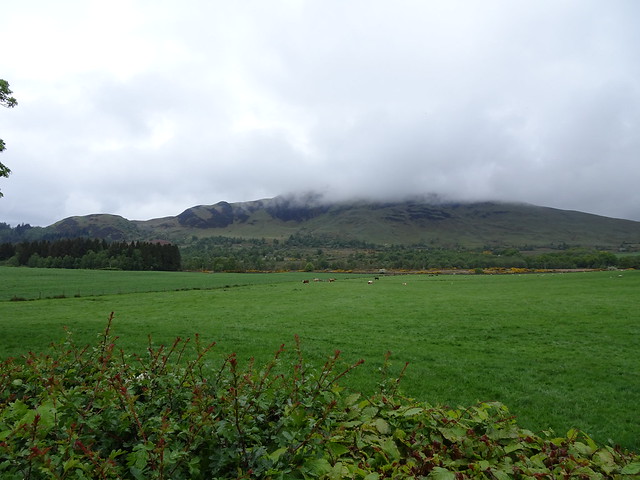 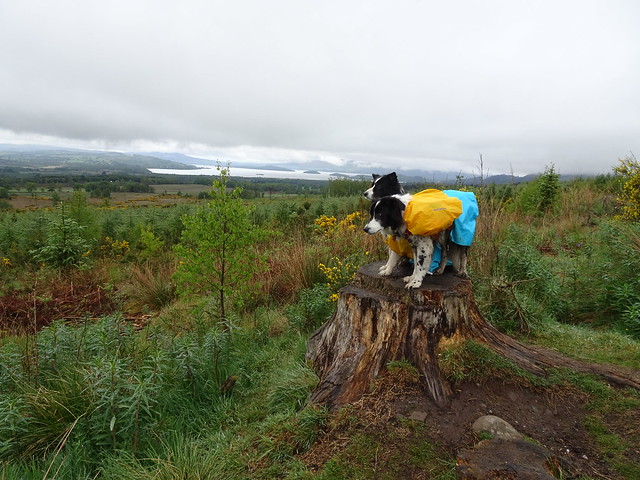 We took the road walk to Balmaha which thankfully had a sidewalk all the way and wandered into the town a little footsore after pounding tarmac for two miles. I ate a quick snack, said a quick “hello” to other WHW hikers I passed at the cafe and got some water and then we pressed on. We paused at the Tom Weir statue in the park to read about the iconic local hiking legend and mountain man who had been instrumental in protecting some of Scotland’s most scenic areas. 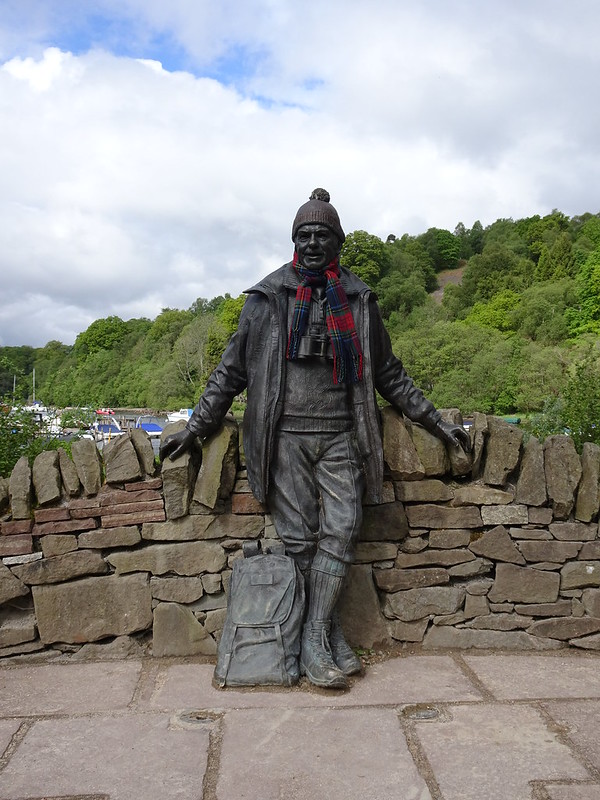 Blamaha sits on the edge of Loch Lomond at the south end and it felt a little surreal that we would be walking by this body of water for the better part of two days. 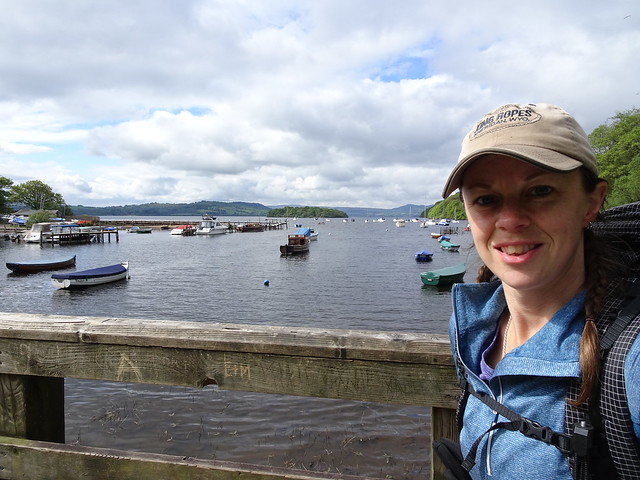 We hit our first moderate climb out of the trail (since we didn’t do Conic Hill) and was surrounded by bluebells…the smell of them was all-encompassing in the much-appreciated sunshine that was now gracing us. At the top of the hill it was finally time to remove my waterproof pants and it was such a relief to be rid of them. 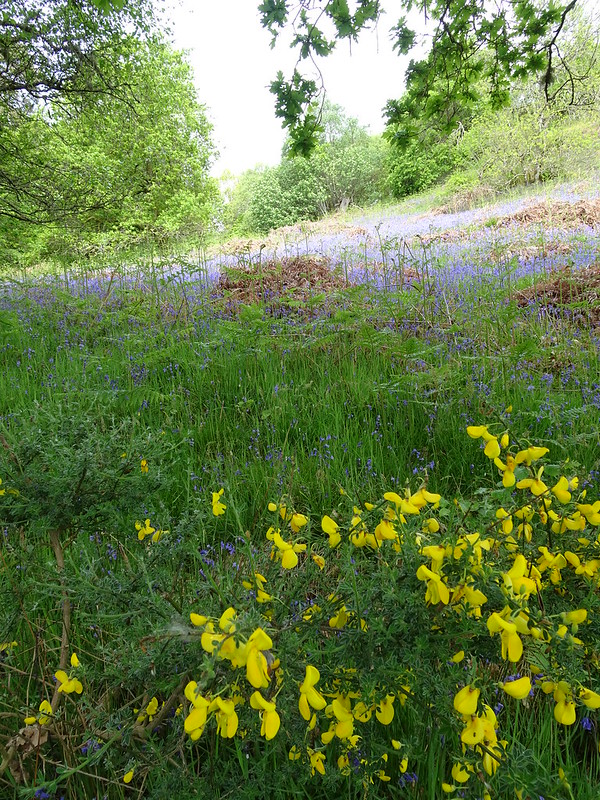 The scenery didn’t change much and we paused only briefly at Cashel to eat lunch and grab a midge net for my head…I didn’t want to suffer through another night again. I was really glad that most places seem to carry these things, even if they are at slightly inflated prices. 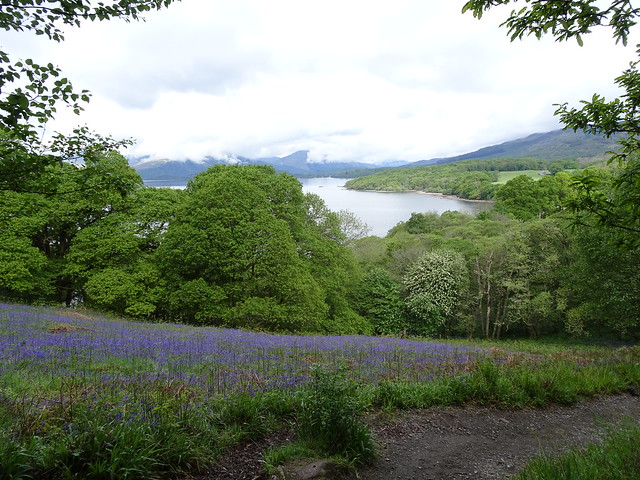 Trees surrounded us, bluebells carpeted the floor and the lake guided us onwards constantly to our left. It didn’t change much. It was also around this time that I started to get some sharp stabbing pains on the inside of my left foot. I had not stepped badly or anything I could recall but it got worse with each step until it felt like my foot was on fire. I paused and it went away but as soon as I started walking again the cycle of pain started over again.

With a brief thought I questioned my shoes and paused, while fighting off midges, to loosen my left shoe. Neither was over-tight (had numbness issues with that before) but apparently the laces were pressing on something just right to cause pain and as soon as they were looser the pain ceased. Crisis averted. 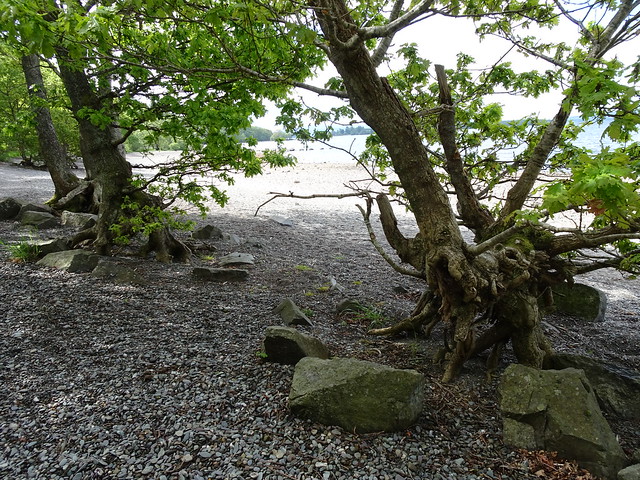 At the top of a steep climb and a hundred or more steps, and as I paused for a bite and a drink of water, another hiker passed us. I hadn’t seen too many hikers up to this point and we chatted for a bit…this was his first long-distance trail and he was struggling a little, but enjoying it anyway. 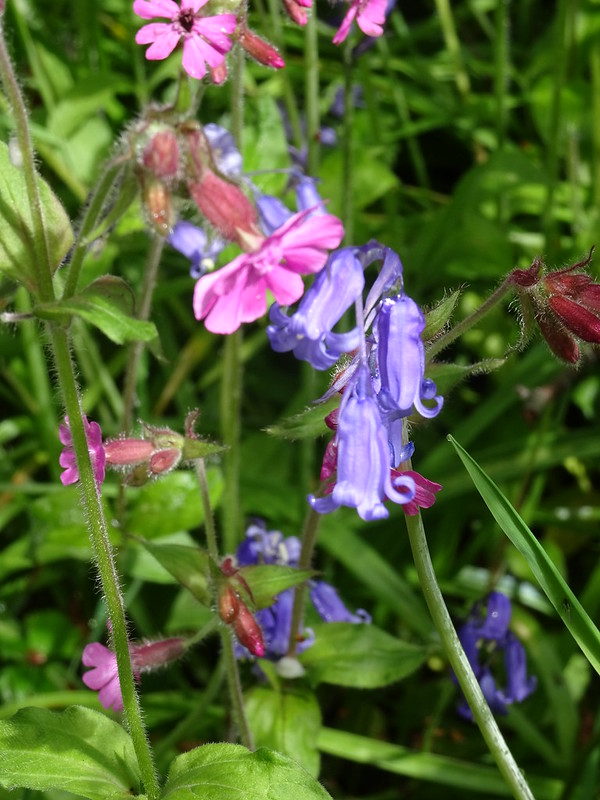 We came across some permitted campsites at Sallochy and I had to double check the name of the place we had a permit for. We were way too far south to be stopping already and the map confirmed we still had a couple of miles to go. 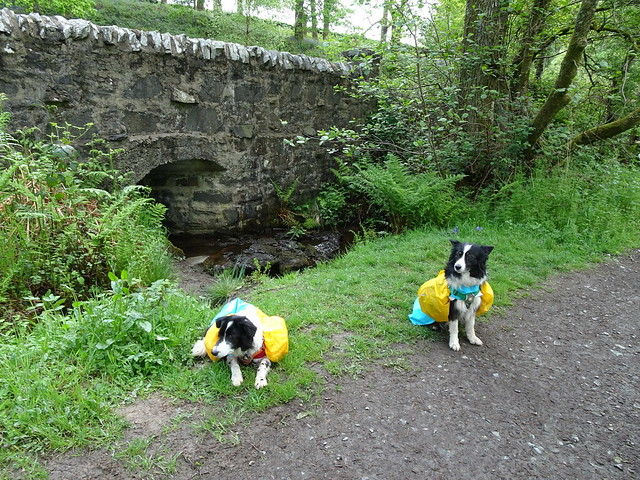 At about 2pm we reached the campsite I had booked for the night. Loch Lomond is one of the few places in Scotland that restricts dispersed camping due to the area’s popularity and a permit is required to camp in one of a handful of locations along the loch . It was very early but it gave me a good chance to get the tent set up and to let it dry out, and just as it was up a very considerate breeze picked up to help. 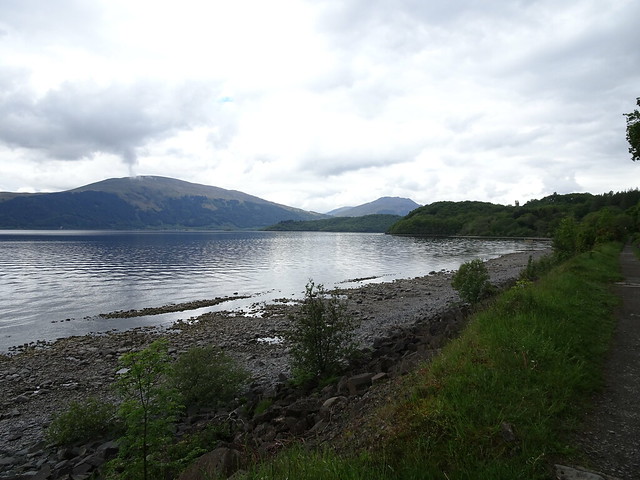 With now 6 hours to kill until bed time I put my water bottles in my pack and headed a half mile up the trail to the Rowardennan Hotel. I grabbed a bite to eat and drank a couple of good beers while chatting with some other WHW hikers, including two lovely American women from Arizona (whose names I forgot) and before too long it was 6pm and I headed back to camp to cook dinner and read a book.

Rangers showed up around 7pm to check my permit, and other campers came in about 8 although I was well ensconced in my tent by that time and didn’t even poke my head out until I had to take the dogs out at 9:30pm.