Mottled grey skies hid the tops of the peaks surrounding Keswick…not the promised sunshine, or even a partly cloudy day. The forecast remained good and so I was in the car by 9:15 and heading for Wasdale. I was glad I hadn’t left later than I did as there was almost no parking available and only by luck were there a few spots along the side of the road that were usable.

From the car we walked through a farm to start the trail up to Great Gable. It was initially flat and gravel but soon started to rise. Soon we were rewarded with views behind us and all around of the rugged Wasdale Valley and Wastwater. Scree-covered slopes plunged into the cool depths of the glacial lake. It could have been a wild, rugged and stunning valley if it weren’t for all the people. 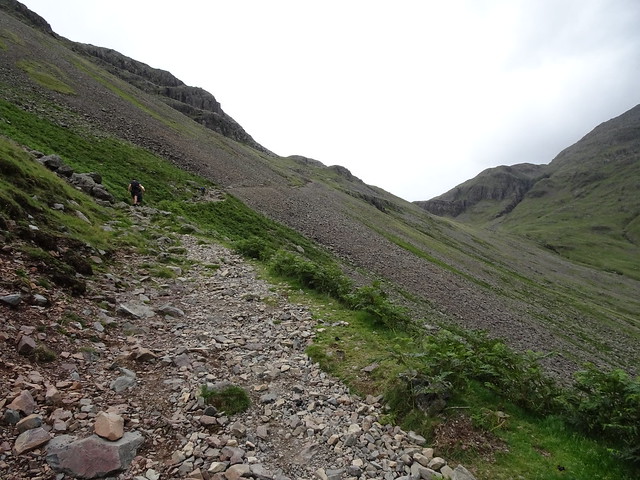 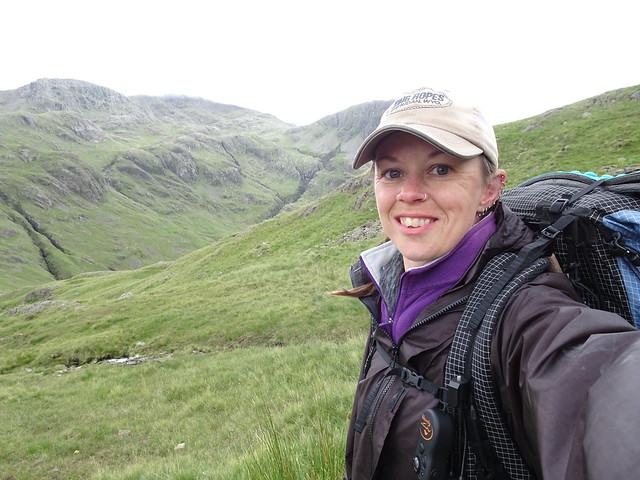 Scafell Pike hid, shrouded, in the clouds to my right as we climbed. Occasional smatterings of rain came through but never with much seriousness…only enough to have to put the camera away. The peak of Great Gable to the left became invisible behind its own lower bulk. 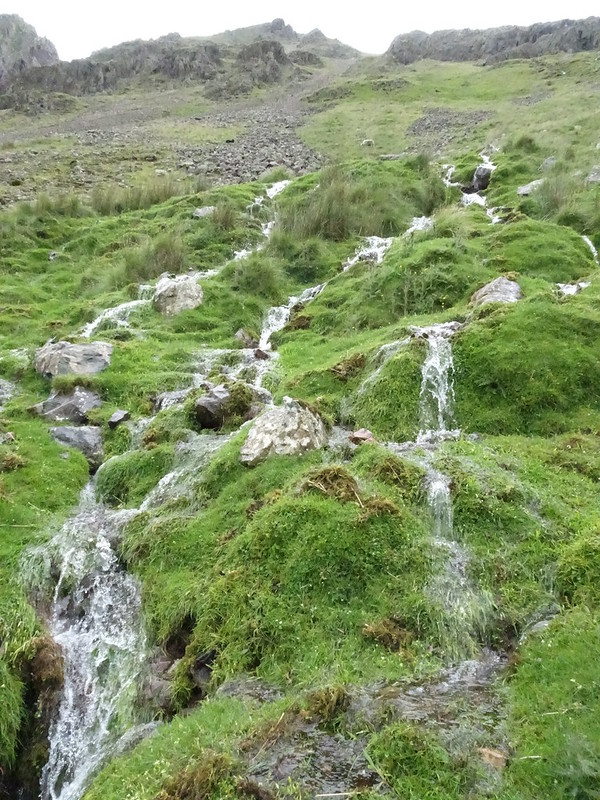 We paused at Styhead Tarn at the apex of Styhead Pass before starting the never-ending ascent to Great Gable’s pinnacle. This is where the trail from Seathwaite up to Scafell Pike intersected with the “easy” trail from Wasdale Head that climbed to the top of England…and the amount of people more than doubled. 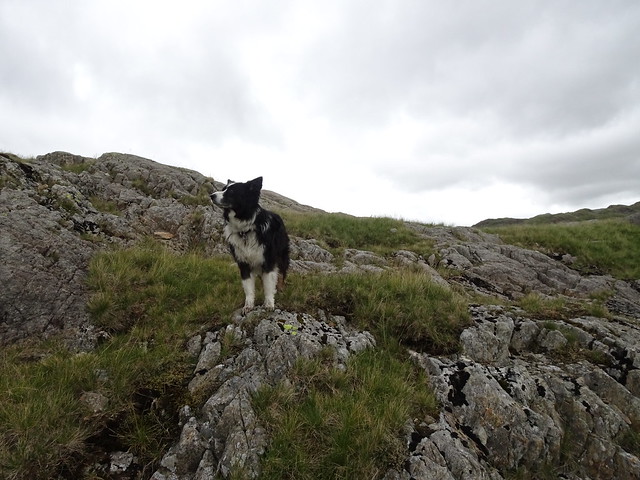 The climb was tough and long and more people were coming down than going up…in fact I think I was the only one going up this route. The path was either small rocks, large rocks or placed “flag-stones” put into position by national park rangers…those are the ones I liked.

By the time we were half way I up I was exhausted and we stopped for another break. The views just kept getting better as we climbed, and every so often the clouds would depart the top of Scafell Pike. With more open views we could see the little dots of people milling around. 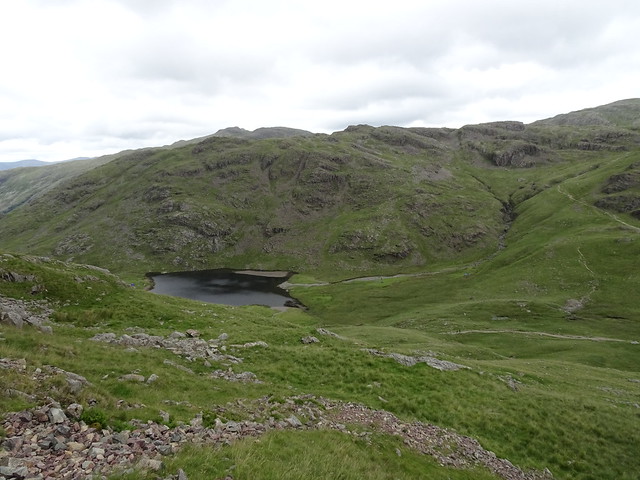 Eventually, with much wondering if the mountain would ever end, some scrambling and cairn finding we reached the top of Great Gable. The views were epic. 360° scenery assailed our optic nerves and it was almost too much to take in. We looked down over Wastwater to the south west and Buttermere and Crummock Water to the north west. We could see the brutal switchbacks of High Crag and the lofty reaches of Great End and Scafell Pike. To the east yet more mountains scraped the sky. 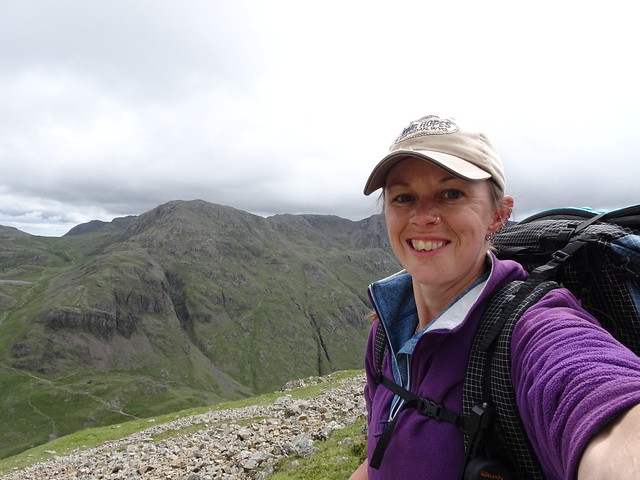 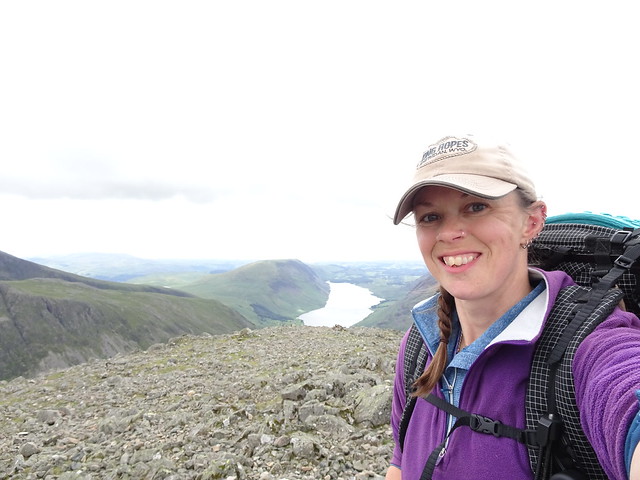 I had the mountain mostly to myself but after a few long minutes we made the treacherous and rocky descent to Windy Gap. I lost the trail one time as there seemed to be no cairns of any description and we ended up in a not-so-favorable location so we had to back-track slightly. The notch between Great Gable and Green Gable certainly lived up to its name.

I watched people descend the steep red path from Green Gable and heard more than a few complaints from a distance…apparently it looked better from afar than it actually was up close. However it wasn’t too bad to climb and when we reached the top and looked back at Great Gable I was lost for words. Great Gable from the new view was so much more dramatic than the long scree slope I had climbed and the cliffs were quite imposing. 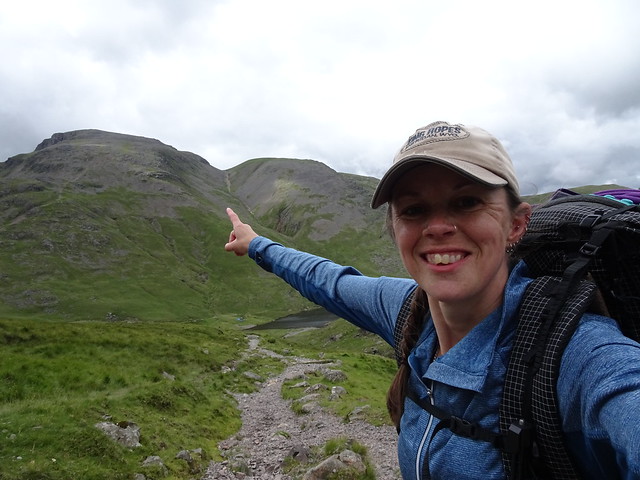 A brief stop atop Green Gable was enough to take in the view before we attempted the steep and treacherous descent back to Styhead Tarn. It wasn’t fun but it was definitely better going down than it would have been going up.

Back at tarn-level I was disappointed by the two large groups with massive tents who were blaring music. One also had a fire but I couldn’t see if it was off the ground. I don’t get coming into the mountains to blare thumpy music…just enjoy nature already. I knew I wouldn’t be staying there.

A short climb brought us to Sprinkling Tarn beneath the shadow of the imposing Great End. There were already a few tents dotted around the tarn so was glad I had arrived a little earlier than planned. The only flat dry spot I found was on a small hillock and surrounded by bog. I did find a small path through and set up the tent. 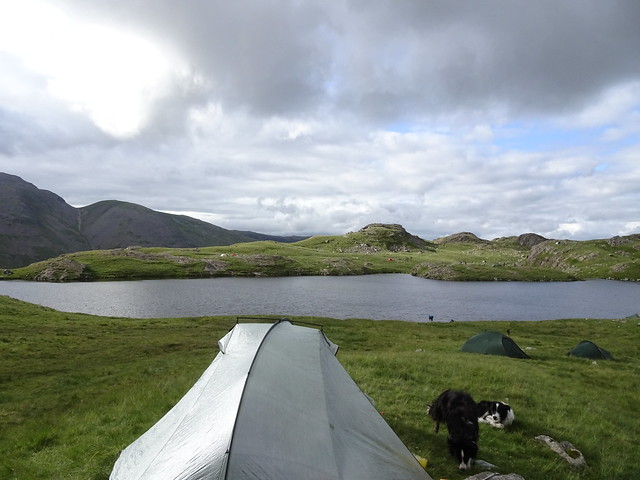 Unfortunately there was a group across the tarn playing music (again, why?…and play it quieter and be considerate if you need it). As the evening progressed and I made dinner and fed the dogs more and more people trickled in to pitch tents. With the wind blowing I went inside to read didn’t watch how many finally showed up. Someone passing my tent at about 9:30 made a comment about counting 40 tents. This was not what I was expecting or hoping for on my only wild camp of the trip. It was certainly noisy and felt worse than a campground. 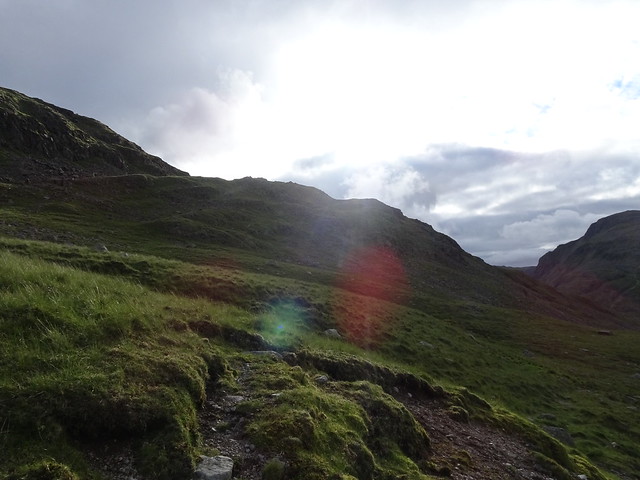 I read for a while, trying to stay warm and wondering how so many people would be “taking care of business” in the morning…I was wondering how I would with no privacy.

I slept better than I thought I would…I really struggled with comfort and the cold. I wasn’t actually cold…just psychologically I thought I was. I had pitched my tent, however, on a small bump on a little hillock which meant that there were no flat spots to lie on and I kept sliding into the door and the wall, or off my air pad. I was glad to see 6:30am and only crawled into the cool morning breeze when the sun hit the tent.

A quick breakfast and then a quick look around while “taking care of business”. If there is one reason to carry a poncho, this was it…privacy in front of everyone. Although 95% of campers were still asleep.

My neighbors on the tarn left before me…one of them, I had discovered the previous evening, was from the next town over from where I live. Neighbors in the mountains, neighbors at home. What are the chances? 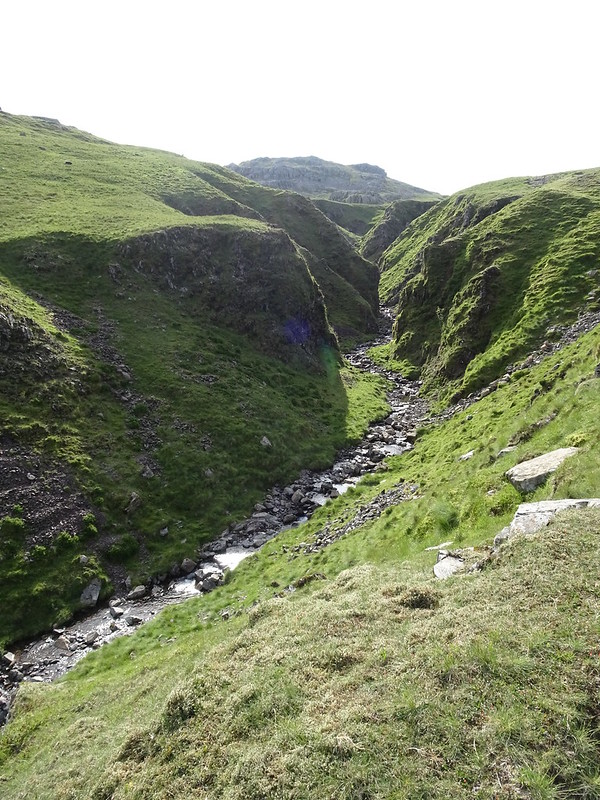 I had spent all night being irritated with the campers and the camp that I was pretty sure I was going to forget the whole trip and just hike out to the car in the morning. But stubborn me ignored that gut desire and made me climb to the top of Great End, my 14th Wainwright. And of course, stubborn me knew that once I was there and saw how close it was…I wouldn’t quit until I’d reached the summit of all English mountain summits. 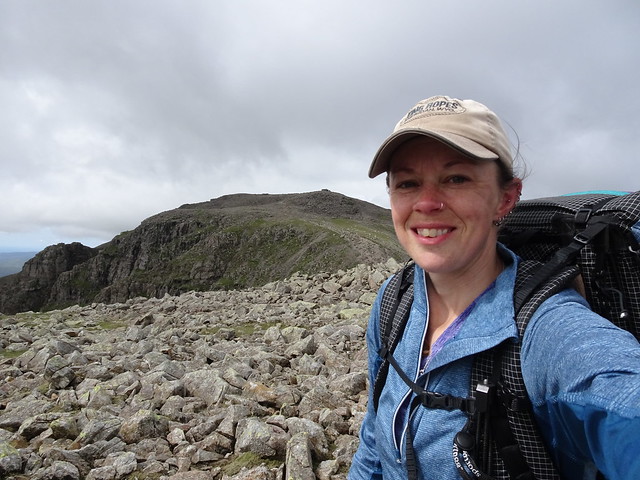 Part of my excuse for not wanting to do the climb was being concerned about the terrain for the dogs; I had been given some warnings about it. The first we encountered was climbing up toward Broad Crag through a minefield of boulders. However it was neither as treacherous or difficult as I had been led to believe…and certainly wasn’t as dangerous for the dogs as the boulder field before Jackass Pass in the Wind River Range. The dogs actually handled it better than I did…regular mountain-goat dogs.

So with Great End and Broad Crag behind me, neither of which had been a tough climb; I was, after all, about 3/4 of the way up them just by camping at Sprinkling Tarn and having done all the hard work the previous day.

Wide expanses of mountain and valley surrounded us on every side…Wasdale Valley and Wastwater to my right, the Eskdale Valley to my left. Great Gable stood sentinel at my back and the distant glint of sun twinkled back at me from Derwent Water. I could see the blinking lines of shimmering cars in Seathwaite lining the road, a metal divining rod pointing towards Scafell Pike.

A final bouldery descent into a deep saddle was followed by a quick snack of cheese and crackers…no wine though, sadly. And with a snack came entertainment…fell runners who had already come up from what is basically sea level at speed and were dancing nimbly from rock to rock like Big Horn sheep despite the pull of gravity. As soon as they had come they were gone, disappearing up the side of Scafell Pike with skill akin to the parkour athletes of the cityscapes. 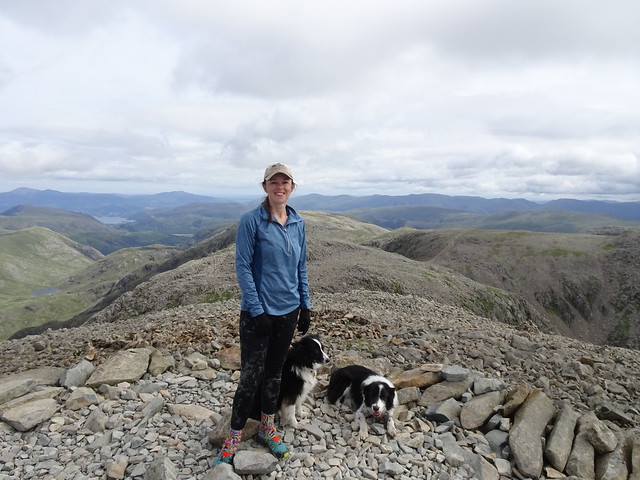 We climbed far slower…the pack had something to do with that I think…but it wasn’t bad at all and within twenty minutes from the saddle we were standing on the top of England. I was standing on my first “highest peak” of a country; no doubt there will be a summit of Snowdon and Ben Nevis in my future somewhere.

A quick photo or two were taken, both of which managed to make it look like I was the only one there. The peak was busy but not crowded…there are good reasons to start early in the day. Passing all the people on the way down let me know exactly how much busier the top was going to get. 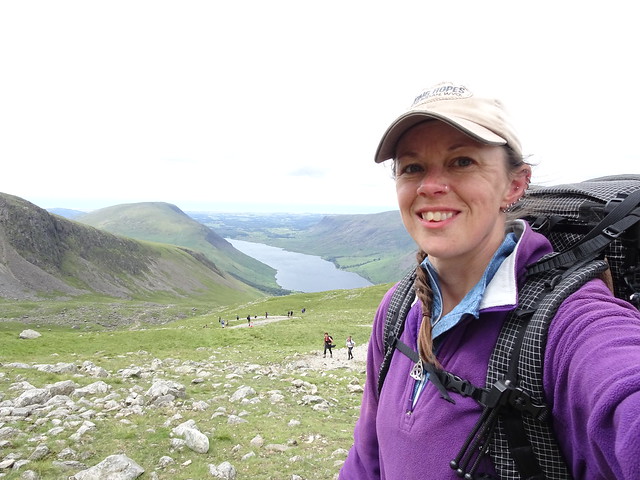 The descent was so much harder on the legs than the climb…and it never let up. Some sections were lovely paved slabs of rock and others were slippy, slidy, ankle-rolling rubble rocks…and yes I fell, again. So graceful. 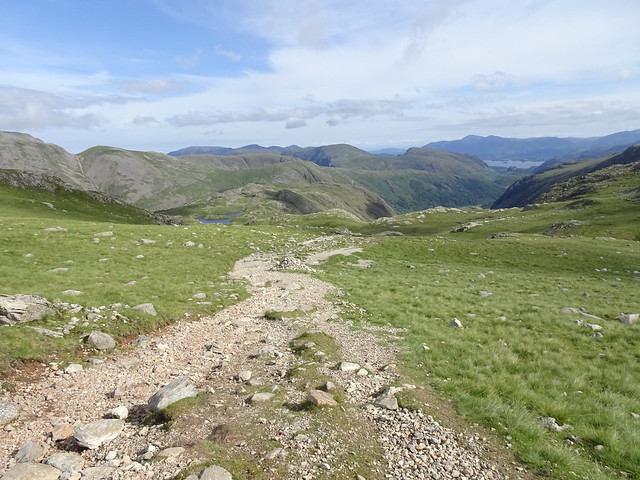 With legs like jello, shaking so hard I actually had to sit down and rest a few times, I finally made it back to level ground after about 90 minutes of descent. It was hot…not just warm, but hot. The difference 3000ft made to the breeze and air temperature was now very apparent and I was sweating.

I was tempted to dump my gear at the car but I resisted; too much expensive equipment to leave as visible temptation. Instead, I lugged everything another ¼ mile to the end of the road and to the Wasdale Inn. The pint of beer and nachos went down a treat despite them being out of sour cream AND guacamole. It was good end to a fabulous hike and I was thankful that stubborn me had won out…I knew I would have regretted not doing the whole thing…especially with Scafell Pike so close…I would have been an idiot not to so it and let all that effort go to waste.

You can watch my entire Scafel Pike and Great Gable adventure here: