First, let my apologize for the serious lack of pictures. I bought a new camera (tiny one in order to save weight) and forgot to format the SD card. I think I got one salvageable picture. This is the only one I could save: 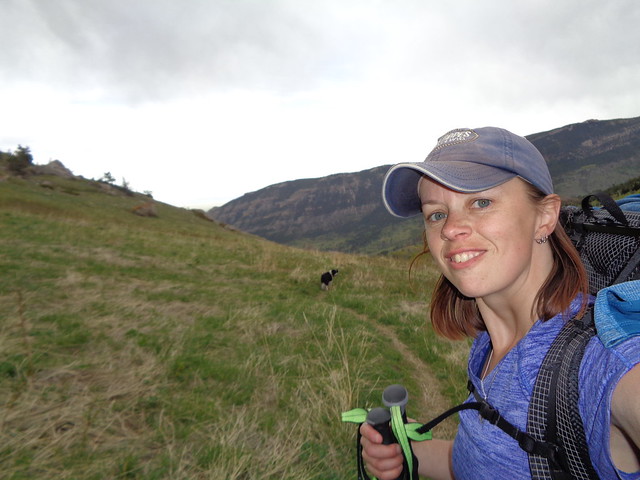 Saturday morning started out overcast and cool as I headed to town to pick up some last minute items; some bear spray and the aforementioned camera. It was then a 30 minute drive to Tongue Canyon Trail-head where I was starting my hike.

The parking lot was busy but I found one place to pull in and to organize me, my gear and the dogs. Kye has never loved wearing a pack and this was her first time carrying their food…that plus the e-collar had her glaring daggers at me.

My pack (a ZPacks Arc Haul) felt heavy, but in reality wasn’t bad for someone doing this for the first time. I was ready to go and we headed up the trail, passing a few groups and individuals. The sun was finally coming out and it was getting pretty warm to be hiking up an incline. Kye stayed behind me, following in my footsteps, which was unexpected since both her and Cody usually love to run and explore. Cody led the way but didn’t deviate from the trail too much.

It was only after I had been hiking about a mile that I realized I had left my hiking poles behind…hiking poles that hold my tent up. I panicked a little at that moment but made the decision not to return for them, praying I could find a sturdy branch to make do. I cursed my inattentiveness and hoped no one would walk off with them since I had left them leaning against the side of my truck.

We continued hiking up the canyon, pausing occasionally to drink and snack, and giving Kye a rest break with her pack. I had thought the trail ran closer to the river, but it stayed well above the raging, brown torrent below. This meant I had to share my water with the dogs and hoped that the next water source would be within the next couple of miles.

At around noon, and three miles up the canyon, we reached Sheep Creek. The dogs had their fill of cold mountain water and got their paws wet. Thankfully there was a bridge for people to cross as the water was definitely icey.

After crossing the bridge there was a nice campsite off to the side of the trail where we stopped for lunch and a nap break. I also got to use my Sawyer filter for the first time and refilled my water bottles from the creek…it tasted amazing! It was also my first time ever drinking filtered water taken directly from its source.

A couple of day-hikers went by and we chatted for a while. I mentioned leaving my poles and asked if they’d be kind enough to put them in the back of my truck. They said they’d be more than happy to as I explained what my truck looked like.

With two liters of water and an hour break under our belts we headed up the trail again…and by up, I mean UP!!! It wasn’t straight up, but it certainly felt like it to untrained legs and I was feeling the burn. I would make it twenty paces before I had to pause. Again I cursed myself for leaving my hiking poles…they make a BIG difference on hills.

I ran into a couple of day hikers at the top a small rise and we talked for a while. I mentioned how irked I was with forgetting my poles and how I was having to search for an appropriate stick to use…and out of the blue this very nice lady offered to let me use hers. I could have kissed her at that moment. I put her address in my phone and promised to return the poles the next day as I came back through town. It was an incredible offer and made the rest of the hike up the hill easier, not to mention that I could now put my tent up.

The rest of the hike continued up a steep trail until we reach Horse Creek, a muddy-looking stream that the dogs were more than happy to drink from, but that I didn’t want to have to use if I didn’t need to. We hiked a little further until we were just below Skull Ridge, and I saw some dark-gray rain-clouds heading our direction, along with an increase in the wind speed. It was at that time I made the decision to turn around and camp lower in the valley.

We took a half hour snack break before heading back down the same path, and going down was almost worse than coming up…my knees shook and my legs trembled like jelly before we were a quarter of the way down. I silently thanked my hiking-pole guardian angel again as it would have been ten-times worse going down that mountain without poles. The picture above was taken about one third of the way down, with the walls of Tongue River Canyon in the background…it really doesn’t do the view justice.

Marmots peeped at us constantly, taunting Kye and Cody with their calls. Cody alarmed a rattlesnake alongside the trail, which I was incredibly surprised to see since we were at a pretty high elevation and you don’t usually expect to see rattlesnakes in the Bighorn Mountains. Another quarter mile further down and I was blessed with the sight of two moose across the valley. I took pictures, obviously non-existent now, but the zoom on the new camera was painfully useless and my phone camera would have been almost as good; it will definitely be worth the weight penalty to carry my good camera in future excursions.

I made the mistake of thinking I saw a suitable campsite down a really steep, scrub-covered slope and we tried to make for it. However, the closer we got the more I realized that there was no place to camp and we had to hike back up to the trail without falling down…again, hiking poles saved my butt.

We got within sight of Sheep Creek and took a detour to the right, back towards the river for a few hundred yards until I found a suitable campsite for the night. The river was just below us and would provide access to water for the night. I got the tent put up on what I thought was a flat spot (well it wasn’t) and then cooked a hearty meal of Ramen noodles, using my nice reflectix cozy to save fuel.

I fed the dogs and headed down to get water. I did learn that a collapsible water bladder makes it almost impossible to get water from a level source (river surface or pond) and that I needed to rethink my water strategy for the next trip. I made it work, but it took more trips than I wanted.

With nothing to do and being completely exhausted I decided to turn in for the night at 7:30pm. My sleeping bag was almost too warm but was still awesome, my pillow sucked (don’t buy an air pillow), my inflatable pad kept sliding down the tent although it was very comfortable, and I officially hate sil-nylon for how slick it is. The tent was also only barely big enough for me and the dogs. I thought it would be better but with the rain and crazy wind during the night, we had issues. Cody jumped on me one time in a non-unusual freak-out moment.

With the combination of the cramped conditions, bad weather, and sliding pad and sleeping bag I didn’t get much sleep!

As 6:30 rolled around I forced myself to get up and get dressed, pulling on my fleece long-johns and purple down puffy which kept me toasty warm. Kye was shivering, poor thing, so I played fetch with the dogs for a few minutes to get them warmed up before fetching my food bag from atop a rock (I’d misplaced my bag hang kit).

With teeth freshly brushed I boiled some water for coffee…and while I needed the caffeine it was probably the worst coffee I’ve ever had. I’m not much of a black coffee person so it was especially bad without milk, creamer or hot chocolate. But it worked and got me going.

I broke camp, packed my backpack (finding the missing bear bag hang kit) and got Kye’s pack on her. With the water I had filtered the previous night I had enough to get us the three miles back to the truck and we head back to the main trail.

We crossed back over Sheep Creek but neither dog was thirsty and followed the trail back down the canyon to the truck. We encountered a few people, a couple of which were appreciative of me keeping my dogs under control and commented on how good they were. Un-controlled, unleashed dogs are often a problem on hiking trails and we even ran into a couple. I pride myself on trail etiquette, especially with dogs, as I want to be considerate of other trail users.

With our arrival back at the truck I was relieved to see my hiking poles in the back of my truck, and silenty thanked all the trail angels I met the previous day. If it hadn’t been for the kind Samaritans who had been so helpful my first solo trip might have been disastrous, leaving me with bad memories outnumbering the good ones.

So ended up first solo backpacking trip. I didn’t get eaten by bears, despite no being able to hang my food bag. I didn’t get bit by a snake, and neither did the dogs. My tent didn’t collapse in the wind and we stayed dry, mostly. I think this was a fairly successful first time out.