With a few unproductive days behind me, a city that felt overwhelming and no job prospects on the horizon, as well as some research into winter weather for the area, I decided to make the Subway hike my last day in St George.

The Subway is another hike that requires a permit that you can either apply for online via lottery or hope you’re lucky and try to get a permit the day before from one of the ranger stations/visitor centers.

I was up fairly early and took the dogs out, packed a sandwich and filled my Nalgene bottles. The trail head was fairly close to camp so it only took 20 minutes to drive to. I let the dogs out briefly before the trail head as they would be chilling in the bed of my truck while I hiked (with shade and water of course) and I wanted to make sure they weren’t crossing their legs for long towards the latter part of the morning. The brochure suggests allowing 5-9 hours for the hike…I was hoping I could get 6.5 miles done in the lesser amount of time.

I filled the dogs’ water bowl, donned my pack, used the facilities and headed down the trail at 8:45 am. A nice flat first 1/2 mile was misleading as the trail quickly descended 600ft, steeply, into the Left Fork Canyon. I was wondering if I would be regretting not bringing hiking poles on my way out (I don’t usually use them when day hiking). 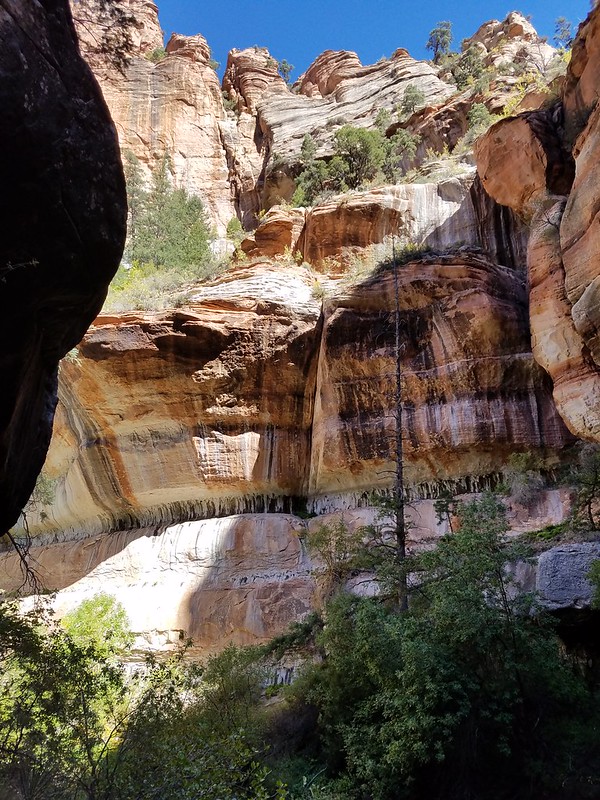 The trail reached the creek fairly quickly and I took note of the surrounding area and the sign where I would need to make sure to head up later in the day (apparently people have missed it before, enough to make it a note in one of the guides I read). 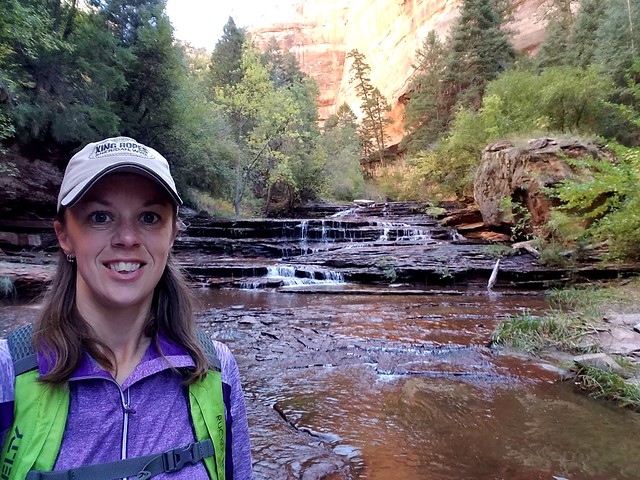 Initially the trail was moderate, sandy (ugh) and slightly rocky and I covered some good ground. There were a lot of “social trails” that were often misleading and I’m sure I ended up on some of them because I couldn’t find the official trail. Thankfully, being beside a creek, most of the trail was easy to figure out. There were many, many creek crossings, constantly back and forth from bank to bank, around rocky outcroppings or steep cliffs. The guide says you WILL get wet but I suspect this is mostly in reference to spring run-off as I found it easy to boulder hop and cross with dry feet at every time. 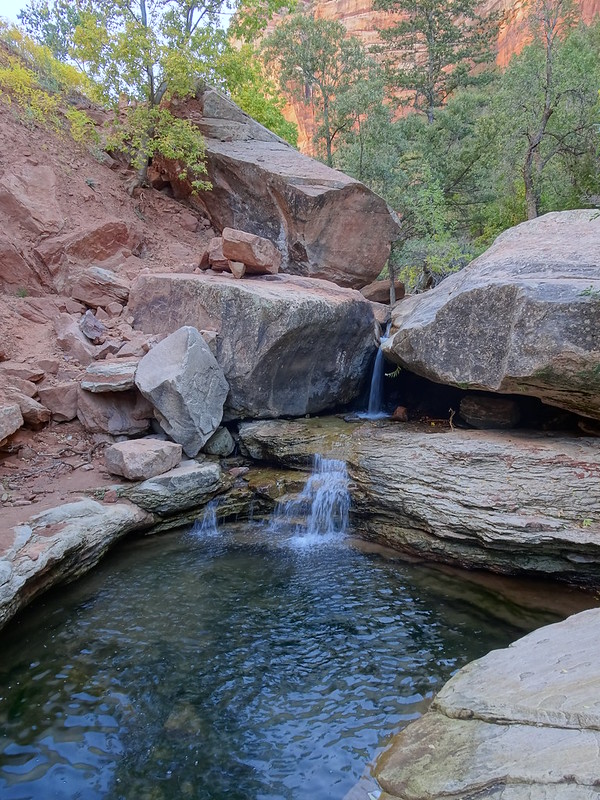 I passed a few small groups of people, mostly in pairs, as I hiked. With such a small window of time I knew I had to cover ground fast if I wanted to make it to the end and see the Subway and waterfalls.

Sometimes the trail followed sand, sometimes it was rocky and other times it involved some serious bouldering and clambering. It often involved some intuitive trail finding and keeping a sharp eye out for cairns. Remembering what the place you crossed looked like would also prove to be helpful on the return trip. 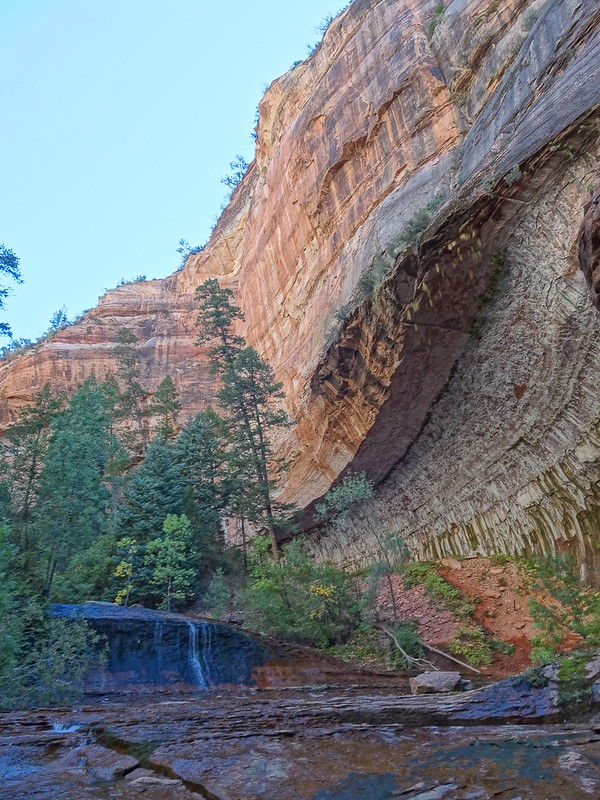 I kept an eye on my watch, definitely aware of how much time I was leaving the dogs and put a cut-off time limit to turn around at 11am. By 10:30 I was flagging in energy and really hadn’t seen much sign of waterfalls or subways…I was pretty concerned that I wouldn’t make it. I paused for a sandwich to boost my energy and re-read the guide I had downloaded to my phone. The instructions made it sound like I didn’t have too much further to hike so I determined that I might be okay. 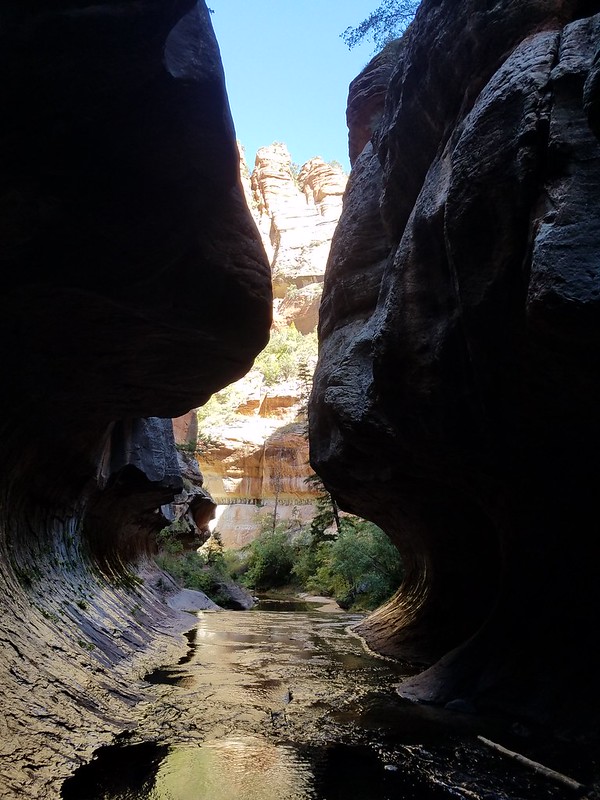 The trail got rockier and more climbing was involved but I finally reached the first of two 15ft waterfalls the guide mentioned. Finally I was getting close. Not far around the bend I found the second waterfall below a sheer, under-cut cliff that echoed loudly. The easiest way to get above the waterfalls is by climbing them around the sides. There were definitely some slippery spots but you can avoid them easily. 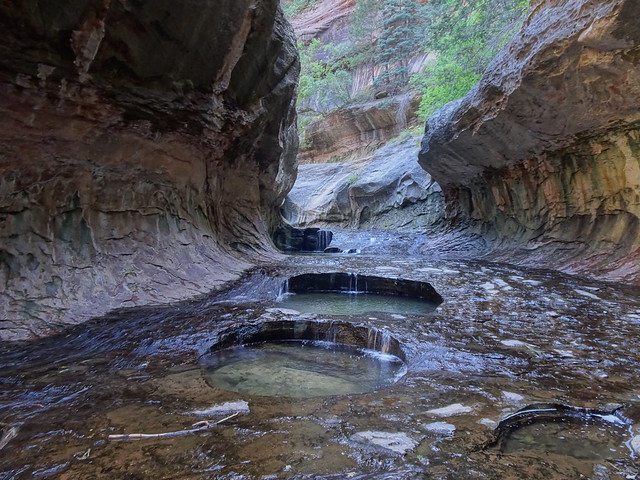 Walls of sandstone towered overhead and I finally got my first view of the Subway, a semi-subterranean water channel that has under-cut the sandstone cliffs above it…and this is the only area my feet got a little wet (could have been avoided). Inviting-looking pools dotted the floor of the tunnel although the water was cold and not actually that appealing. It was a stunning piece of natural architecture and I can see why it is so popular…I have never seen anything like it. 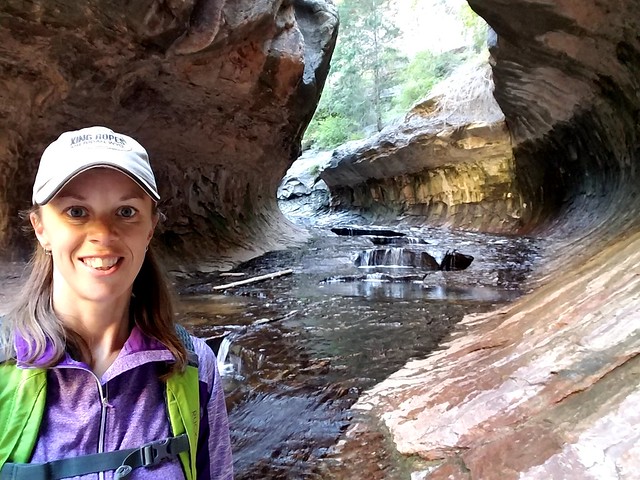 As always I took some pictures, appreciated the beauty for a while, and then headed back out. Sadly, being on a time constraint, I had less time than I would have liked to appreciate the canyon. But there was little more that I could do anyway other than stand and stare at the walls and the pools and the thin strip of blue sky above. If I had been brave, or had a wetsuit, I might have headed in further to see the waterfall but it required a lot more wading than I was prepared to do. 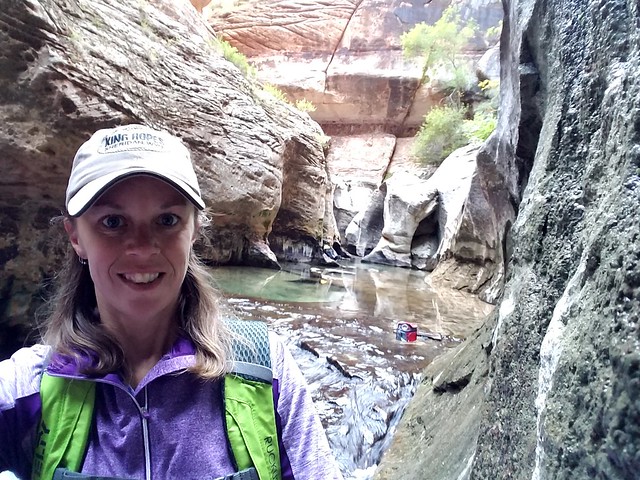 I enjoyed my 15 minutes in the Subway but with my dogs’ needs in the back of my mind I started my hike back, avoided getting wet on the way out, and headed down the trail. I ran into the people I had passed, almost all of whom asked me how much further it was…10 minutes turned into an hour by the time it was 12:15, but of course I had hiked fast (somewhat to my detriment when I fell and got some cactus spines in my hand and cut my arm on a sharp branch). 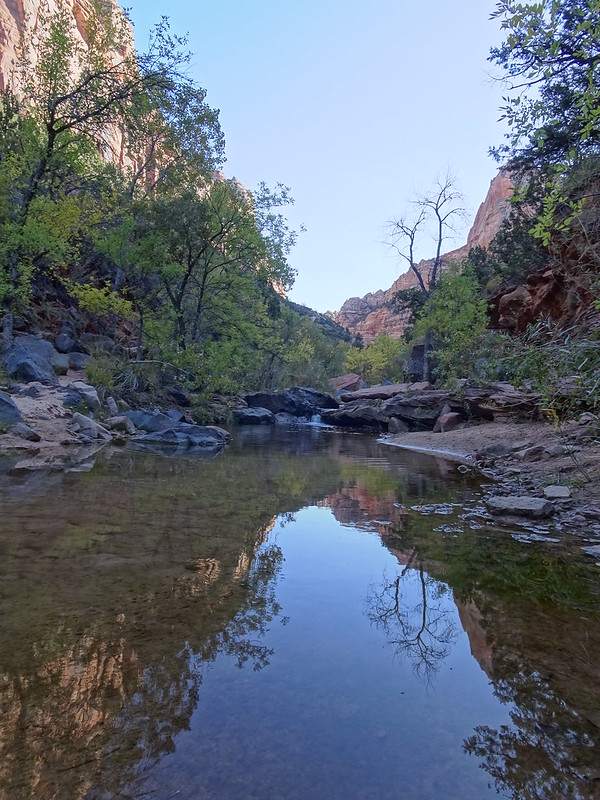 At one point I got slightly disoriented when I didn’t recognize part of the trail. I was watching for the black outcropping that marked the point where the trail climbed back up. I ended up passing a black cliff, and I knew I wasn’t supposed to go beneath it so I back-tracked a ways before being sure I hadn’t missed the upward trail. I continued on and was soon seeing familiar things again, confirming that the black outcropping was not actually the one I was looking for. This is where looking back and recognizing creek crossings was a huge help. 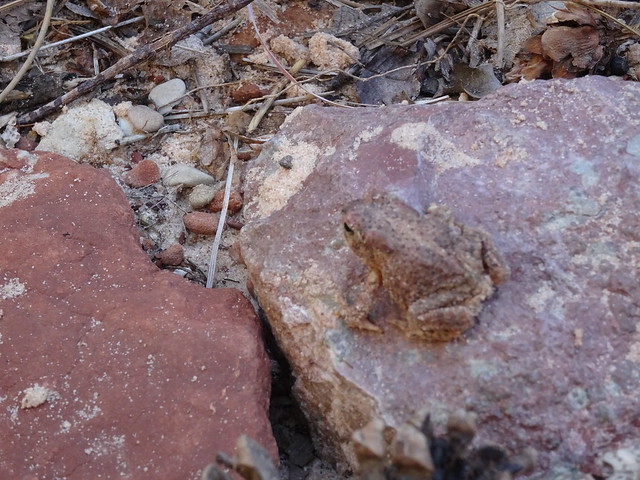 Finally I found the well-signed turn-off to the upward climb…I wouldn’t have missed it even with one eye closed. The climb back up was a little brutal and I was chugging water. What started off as a cool hike in the shade of the canyon cliffs in the morning turned into a harsh climb in the midday sun going back up…I can’t imagine doing this in the heat of summer.

Back at the top, finally, I ran into a park ranger checking vehicles and permits. I handed him mine and he asked how long it had taken me to do the hike and if I made it to the end. I told him how long it had taken me…4 hrs and 45 minutes; 8:45-1:30 (including a stop for lunch and 15 minutes at the Subway). He was impressed and surprised by how fast I had done the hike as it is pretty unusual to do it so quickly. I pointed to the dogs and explained how small of a window I had to do the hike in but that it had been worth it.

Tired, hot and slightly dehydrated I grabbed a cold soda and headed down the road, back to camp. I was grateful to be able to relax for a while with a cold beer and let the dogs play outside before getting things packed away for the morning departure. 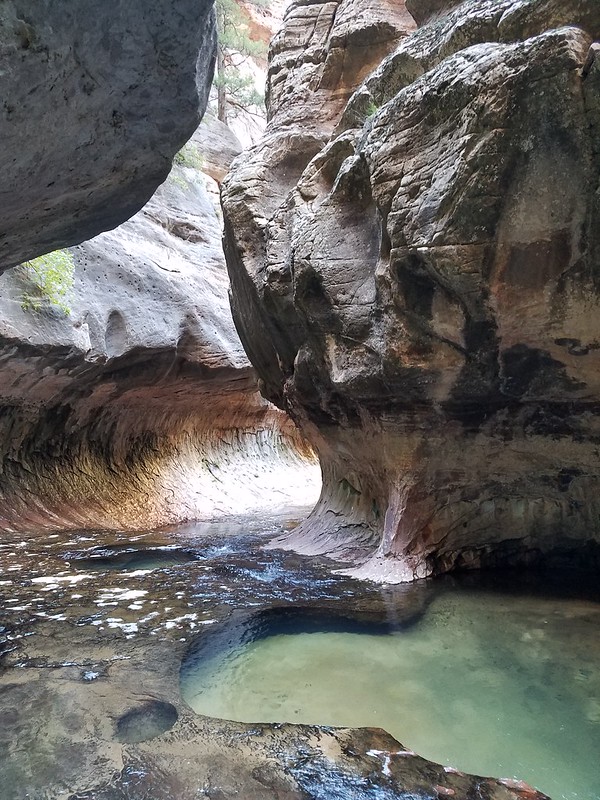 If you are interested in hiking The Subway here is much of the information you need:

While I managed the hike in such a short period of time I wouldn’t recommend it. Allow 6-7 hours to do the trail at a more relaxed pace and enjoy it. Not a trail recommended for anyone not able-bodied and fit as there is a LOT of rock-clambering and trail negotiation, not to mention all the creek crossings that require some pretty good balance and some jumping. However, it is definitely worth doing if you can.