The sun was below the horizon when I woke up. The neighbors at the camground had been pretty noisy until about 11pm so I was glad to have made the decision to sleep in the car as it really deadened the sound of voices. I slept decent until about 3am when the lack of hydration caught up to me and I slept terribly for the remainder of the night with a dull headache that really tried to kick my ass.

I finally crept out of the sleeping bag at about 7 (which I thought was 8am as I was a day early on the time change) and drowsily got dressed. It was cold and there was a layer of ice covering the car…another reason I was glad to have slept in the car). I packed up as quickly as I could, let the dogs play and filled water (the one benefit of a campground). My tent was frozen as I packed it away and drenched with condensation and dew, even on the inside.

Making use of the Red Shoot pub’s wifi I located the start of the next hike I was planning to do and drove the 7 miles NW, through the early-morning mist to Fordingbridge where I paid £5 to park for the whole day. Ponies stood in the road without care in the world, blocking my way and refused to move even when I pulled up inches from them (hoping that would encourage them to move) but ended up backing up and going round them. 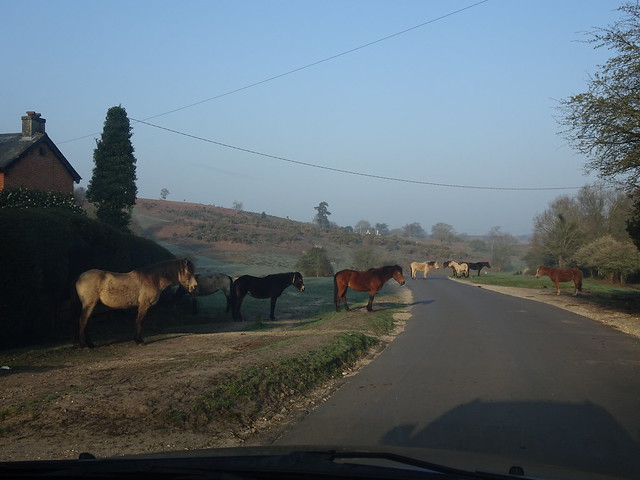 It was a short drive and we got to Fordingbridge a little earlier than I wanted to start. I took some time to let my phone charge and ate breakfast, and as I let the day warm up a little I made my lunch. Of course, as always, I managed to confuse myself and had set my clocks ahead a day early…having an extra day off work for a long weekend definitely threw me. I spent the best part of 20 minutes trying to figure out why my phone wasn’t updating to the correct time.

Finally about 10am (or 9am in non-DST) we followed the printed directions past Tesco and the post office and out of Fordingbridge. It was a very different start to a 10 mile hike than the one we had done yesterday.

We wound through streets, passed road construction and finally turned off on a more secluded path that went past a local school as well as a very loud building sight. At a T-junction we turned right along the single track towards the main road where we passed what used to be the Tudor Rose Inn (on the written instructions) but is now a daycare center and crossed the very busy A road in front of the Sun Valley restaurant. 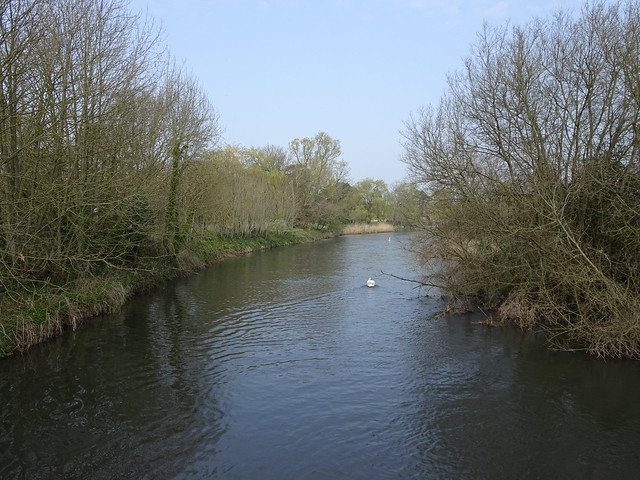 A gravel driveway led us past farm buildings and farmers (and dogs) working with their livestock in the cool morning. We crossed an iron bridge over the river Avon, passed through a gate and the trail opened up into a cow field. No worries…I have cow dogs.

As someone who has been around cattle most of my life I have a healthy respect for cows and we gave the cattle a wide berth even though it meant getting our feet wet. These cows didn’t seem worried by dogs but they were certainly intrigued and I didn’t fancy getting charged or trampled by a particularly obnoxious cow. It had my heart racing a little as the cattle watched us just a little too closely, and moved just a little too much, for my liking. Thankfully there were no calves so the cows weren’t in crazy, momma-cow protective mode.

The next mile was gravel road that divided farm land and we were watched intently from either side by either cattle or the copious amount of swans that seemed to make the floodplains of the Avon their home, or at least their nesting site. And when I say copious amounts of swans I think I counted at least 30 pairs. 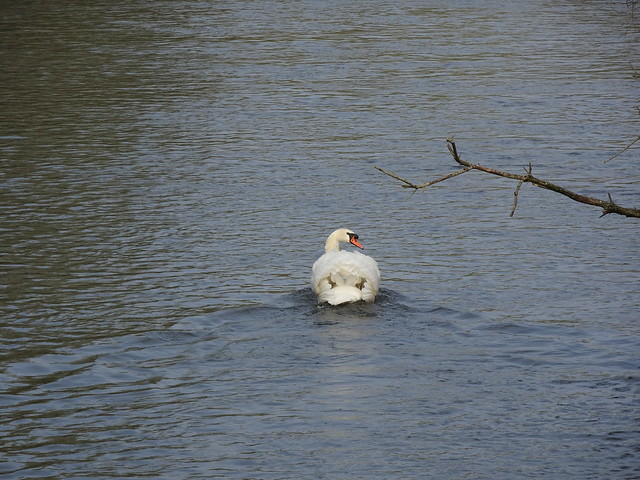 Soon we were out of farmland and following a road beneath the trees. A trail paralleled the road which meant I could leave the dogs off leash. The bane of this trail so far was the short but consistent road walks which meant constantly having to leash and then unleash the dogs…it was a little infuriating and time-consuming.

At the apex of the road trail we were rewarded with views  at the Castle Hill view point. We said hello to another gentleman who appeared to be meditating and took a seat at one of the three benches to enjoy the view and a soda, and give the dogs some water and a break. 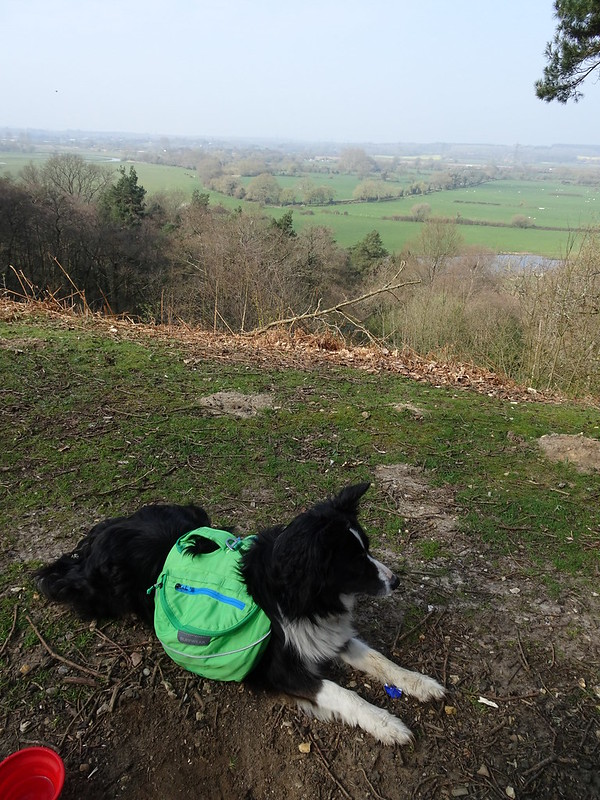 From the wonderful views over the river Avon and the adjoining farm land we descended into the town of Woodgreen where we got to socialize with a bunch of wild donkeys aka Burros (what we call them in the US). We dumped a little bit of garbage at the local store before returning to the turn-off by the Horse and Groom pub and climbed up the road to the common. The instructions were a little ambiguous here and I was questioning whether we were in the right place.

Ponies were abundant on the common but we turned left along the Avon River Trail and disappeared between dwellings on a gravel road, and away from the wide expanse of green that reminded me very much of something out of a typical Hobbit village. We wound between picturesque houses and gardens before crossing a couple of stiles and fields.

It should be said that the dogs had been doing amazingly well with the countless kissing gates and troublesome stiles. Some were hard to navigate for them and provided little space for them to pass through while others gave plenty of room for them to go under the wooden panels or barbed wire, or room enough to duck under the low planks of the stile itself. On one rare occasion they had to climb up and over which was an acrobatic act worthy of medals with a weighted pack. 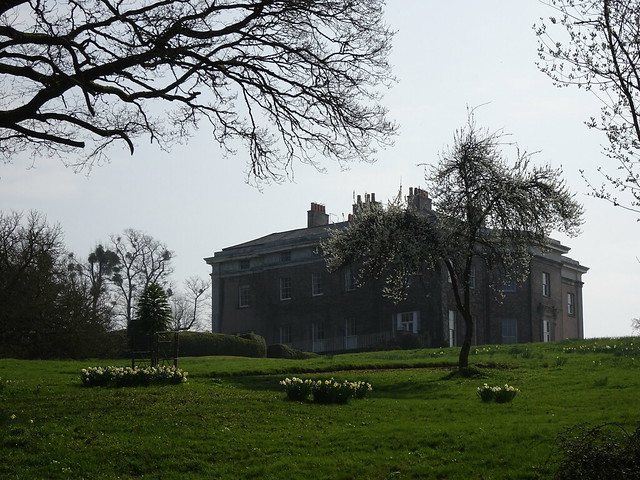 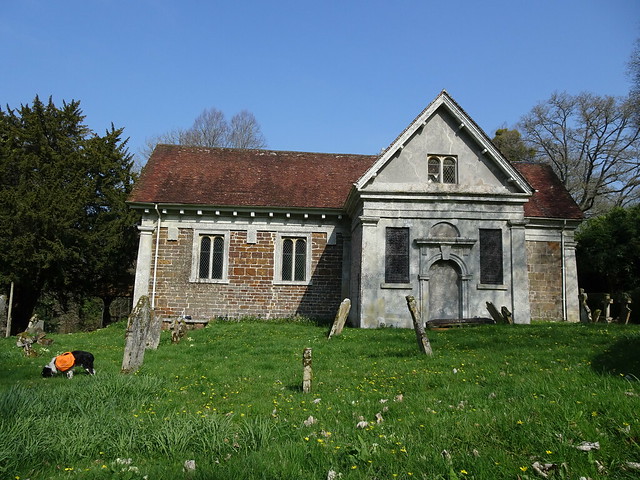 Once we hit the road we followed the river Avon for a quarter mile before turning right and climbing a steep incline towards St. Mary’s Church and Hale House. The graveyard attached to the church was brimming with wildflowers and had great views of the blossoming trees and manor house as we stopped to eat lunch. 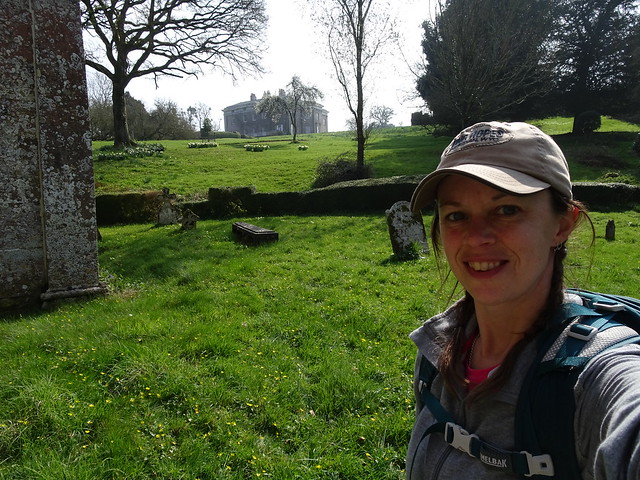 Before too long our quota of lunch-time sun had been absorbed and we hiked past the massive house and onwards past horse pastures, paralleling the driveway of Hale House with its carpet of daffodils. 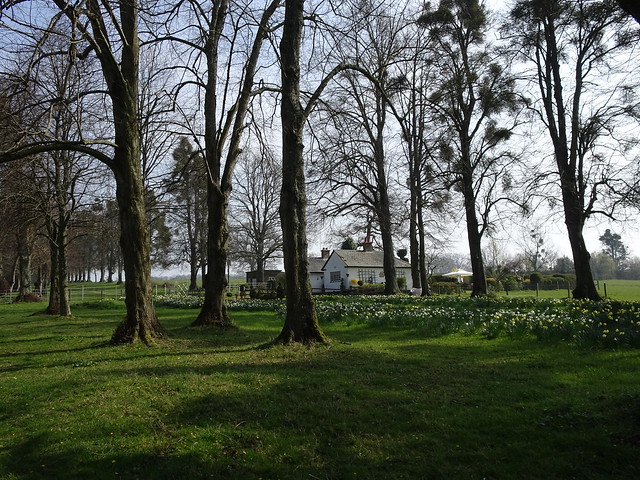 This was the image I always conjured in my head of manor houses and 19th century lords and ladies…sadly the cars in the driveway weren’t as resplendent as the carriages and horses of old, or even of the classically beautiful cars of the 20s and 30s. 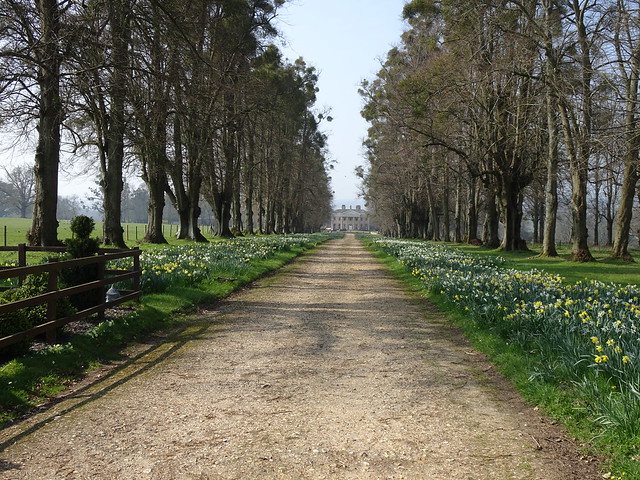 We turned right towards Hale and down the road before quickly turning left down a dead-end road which forked in three ways at it’s end. Our directions took us right and we passed the sprawling estate that was Hemmick Court…it looked amazing but huge bushes and imposing fences blocked our view and prohibited me in indulging my curiosity and being noisy.

Another muddy stream crossed our path and we were quickly surrounded by budding Rhododendron bushes. A very friendly couple with two small dogs were uphill from us as I put Kye and Cody into the normal down-stay position. Unlike most dog owners on the trail these people were incredibly considerate and asked if I wanted to have them put their dogs on a leash. I explained my habits with my dogs and they picked up their “too friendly” dog as they passed us; I definitely appreciate people like this…so a shout out to whoever you were. 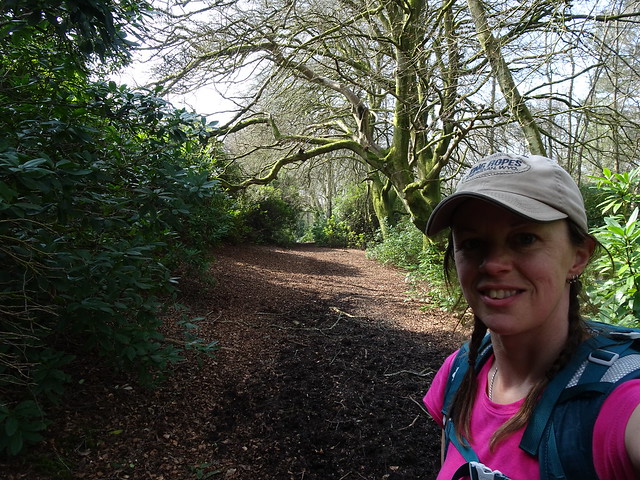 A right turn onto a bridleway kept us beneath the Rhododendron bushes and kept the sun off us. The cooling and damp undergrowth made a huge difference to the air temperature and gave us all the chance to cool off. I was amazed at how overgrown the path was, especially being a horse-specific pathway. The best part about the walk through the overgrown shrubs was how magical and Middle Earth-like it felt…it was remote, raw and real…and I loved it despite the copious amounts of mud.

All too soon we left the protective shroud of the waxy-leaved bushes and crossed a horse pasture with at least 6 pairs of eyes watching us dubiously from a distance. It was short-lived and we were quickly back beneath the trees and on a path then a track beside log-style lodgings that rival anything seen on Doomsday Preppers.

At the first paved road we’d seen in a while we turned left for a short distance where we were stopped by people looking for directions. Sadly I was unable to help them as the area (and England in general) was not familiar to me. 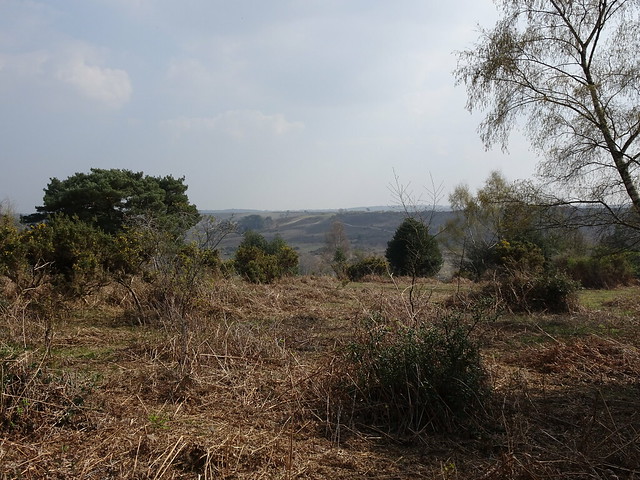 Again the directions got confusing as we passed a vehicle-blocking barrier. We were supposed to turn right opposite a house, according to the instructions, but the directions (and vague map) also directed us downhill. It was slightly confusing. I went with the map and the “downhill” directive and found the bridge we were supposed to cross. Sometimes you have to use a little bit of initiative and common sense.

As we followed the dry and exposed hill top (before dropping down to the bridge) a tiny lizard darted across our path and paused beneath a small branch. He was kind enough to pose for a couple of pictures before making another run for it and disappeared into the heather and the gorse. 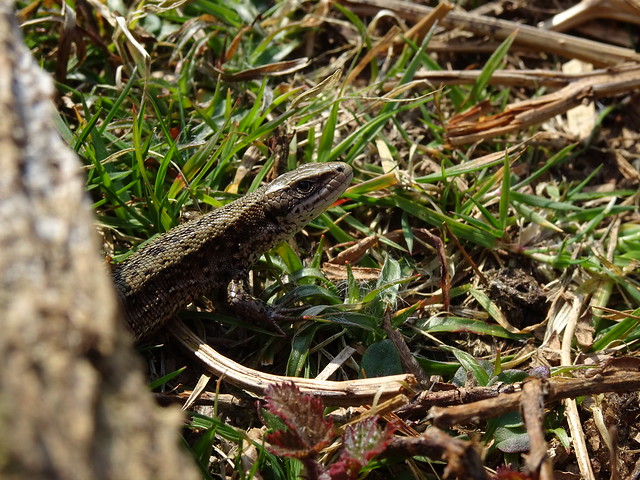 The direction sheet now told us to climb upwards and follow the road to the little village of Godshill (where I stopped for a pint yesterday). However I don’t like walking on roads, especially with the dogs, and I opted to follow faint tracks across country towards a stand of trees. I highly recommend this change of route as when you reach the line of trees, and about half way between the road and the creek) you will find a gate. This is another trail that leads you straight to the town of Godshill and deposits you out on the road at The Fighting Cocks pub…much better than walking beside any road with traffic rushing by. 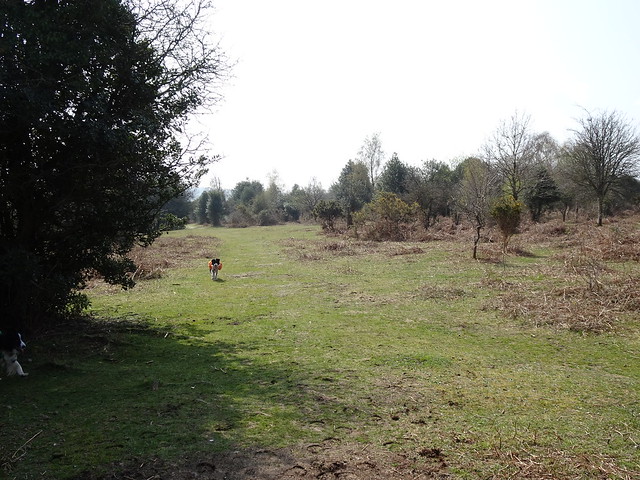 Another enjoyable pint of Hop House was had as well as treats for the dogs and we basked in the golden sunshine. The same gorgeous ponies passed by in a parade as we spent a glorious hour enjoying some people and pony watching. 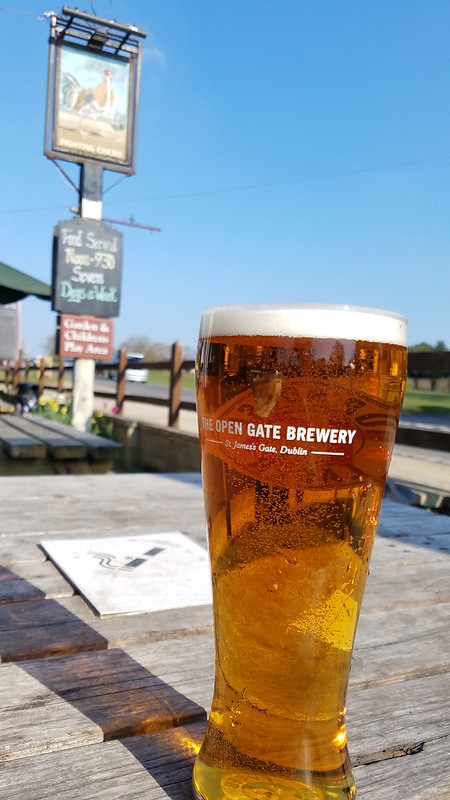 The pint ended and we set off west towards Sandy Balls (yes, you read that right) caravan park and another 2 miles towards Fordingbridge and the car. Half a mile was on small dirt paths but the majority was on the side of the main road which made for a disappointing end to an otherwise-lovely hike.

Back at the car we dropped our gear and walked through town to enjoy a pint of Guinness at The George alongside the River Avon while watching the ducks and some massive fish just below the surface…I’m still not sure what they were. It was a good end to an amazing couple of days. People chatted to us as they loved on the dogs who were certainly not too tired to enjoy the attention…dogs definitely bring people together. 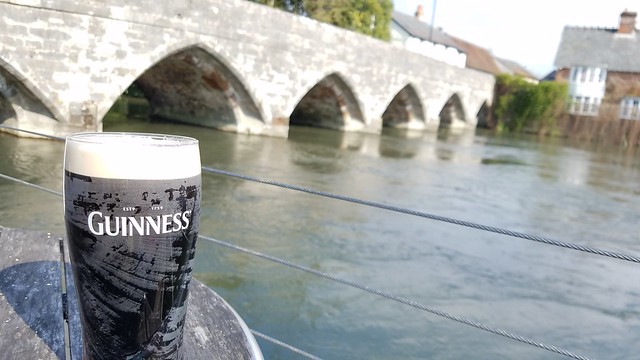 As evening drew in we headed back to the car, drove out of Fordingbridge and spent a couple of tedious hours driving home. Somehow the journey to get to a destination is always shorter than the drive home, maybe because the journey there is part of the adventure.

If you are interested in this walk you can find it here: Fordingbridge – Woodgreen – Hale – Godshill round