After another long day we kept it quiet today. A brief stop at the Bowder Stone outside of Rosthwaite and another brief stop in Rosthwaite itself for a beer in the garden was the start of the day, which was actually already noon by that time (no 8am beer for me if that’s what you were thinking). 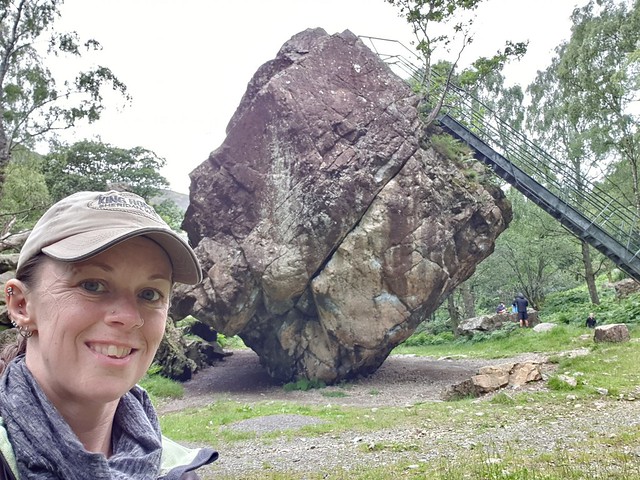 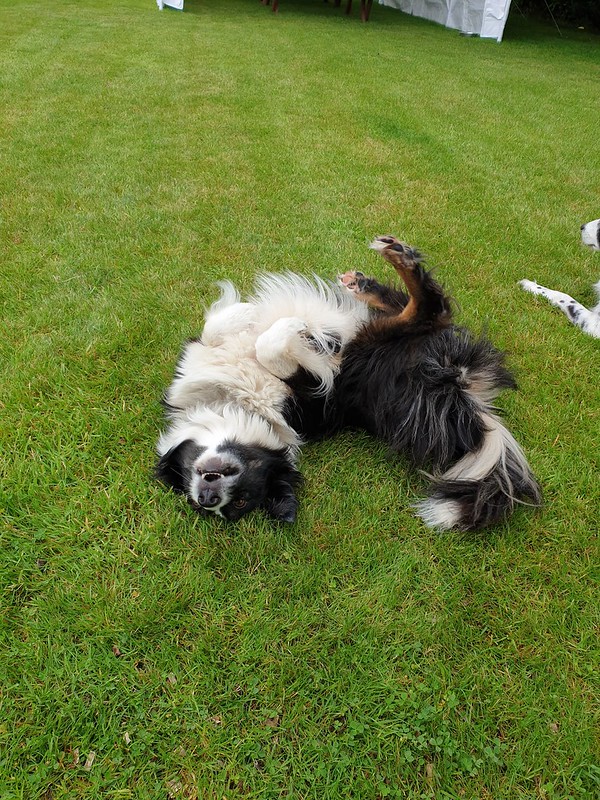 From Rosthwaite we watched sheep being moves to new pastures and I had two dogs very eager to help. We also checked out a couple of farm campsites for future use when we finally get back to doing the original loop we had planned, or a variation thereof. 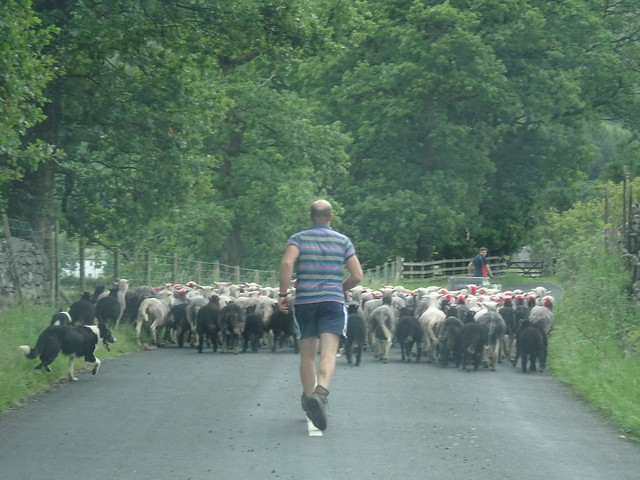 From Rosthwaite we did a quiet, low level 5 mile hike to Seathwaite, the wettest place in England. Of course the sun was out for us and bathed the valley in layers of shadow and sunlight. The easy hike, other than the mild scramble just beyond the youth hostel, followed the River Derwent into the valley to Seathwaite Farm Campsite. 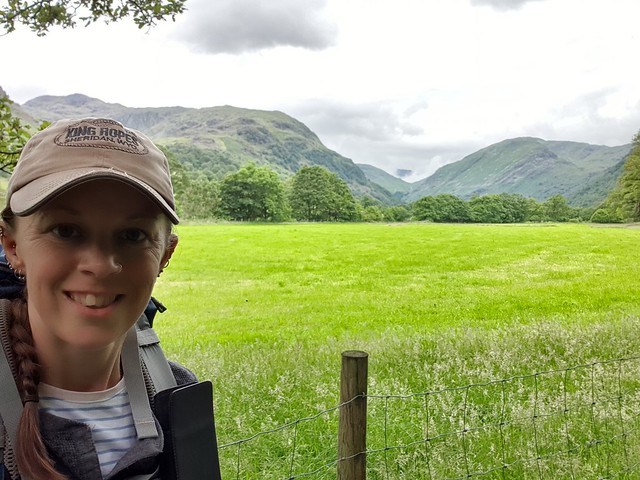 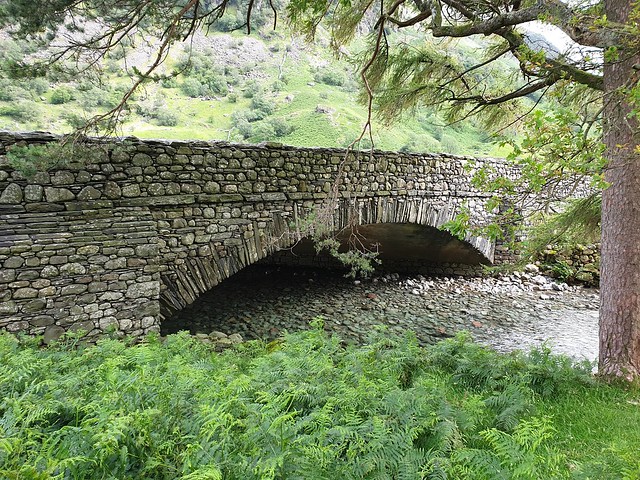 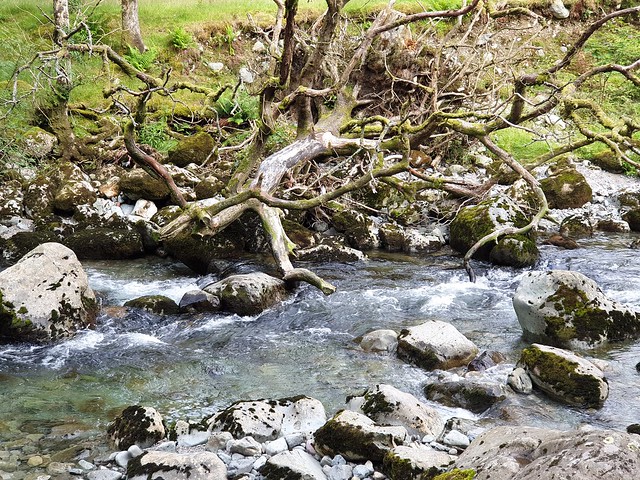 The crystal clear waters of the river, little more than a beck here, were just too inviting. We paused on the banks, a low gravel beach, and the dogs played as I threw rocks for them. Kye brought me at least three rocks from the river bed. With the dogs thoroughly soaked and having had their fun we continued on. 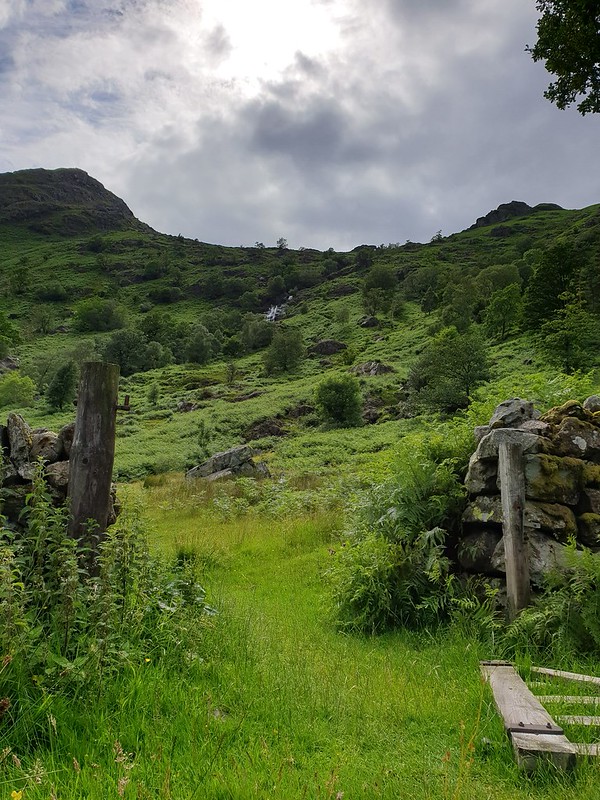 At Seathwaite Farm Campsite we made a slight U-turn and head back along the opposite side of the valley. This route took us through several stone-walled fields before leading us back to the youth hostel and then to Rosthwaite. 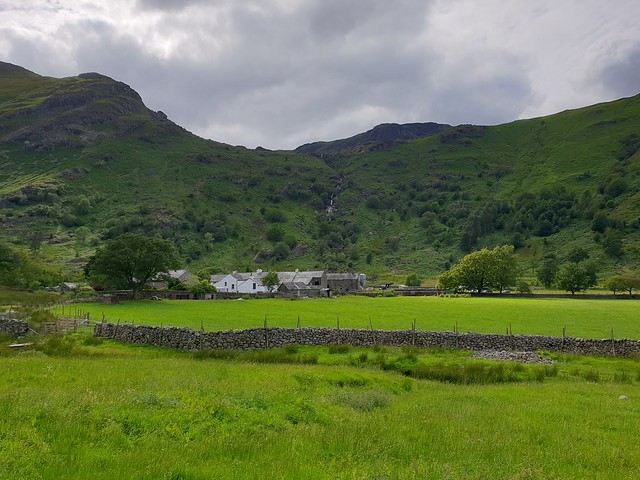 We stopped for a second beer at the Scafell Hotel before heading up to find an overnight parking spot on Kirkstone pass…of which there were few and not easy to find. We did end up in a lovely spot but it rained for a while, although we were rewarded with a gorgeous rainbow first thing in the morning…although the camera didn’t capture it nearly as gorgeous as it was. 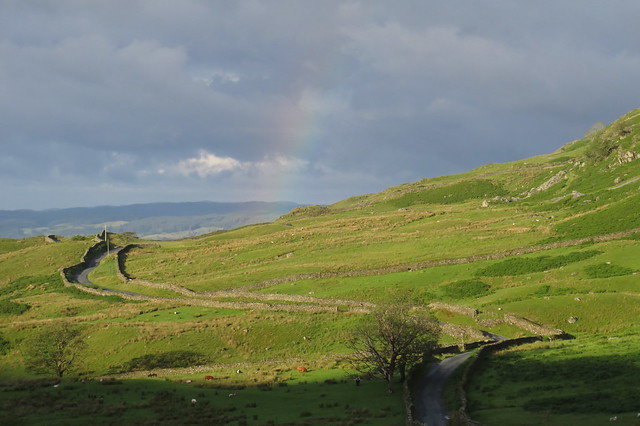 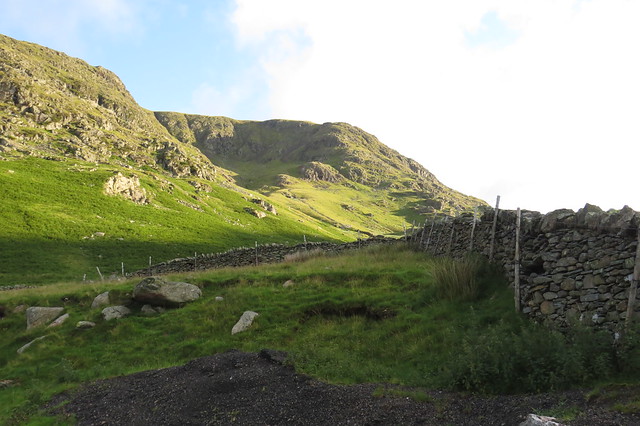 I was up well after the sun and it looked amazing reflecting on the mountains behind us. I am not sure which peaks hugged us to the north east but they were rugged and wild like so many in the Lake District.

The chill of the morning didn’t last long as the sun finally hit the car as I was packing up. It looked like it would be a good day for hiking and the weather forecast confirmed it.

We parked just north of Grasmere (much to my annoyance at the end of the hike) and followed a narrow path on the verge to the turn off of the main road. A quick meander through farm houses or B&Bs took us to the start of the climb for Dead Pike and Steal Fell, the highest point for the day. 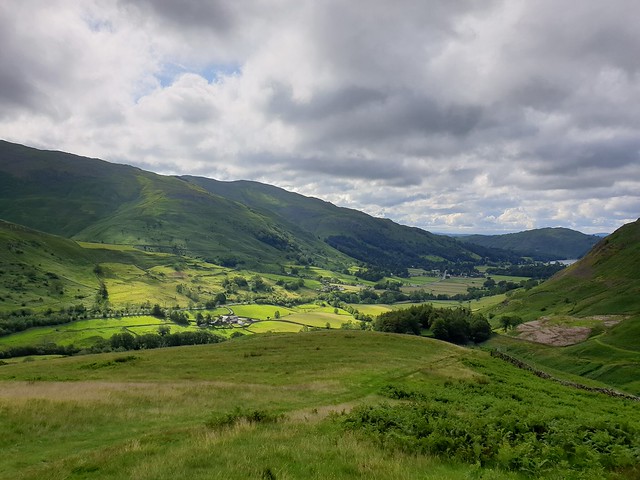 We had mountain to ourselves and the trail was easy to find. Loud voices across the valley brought our attention to farmers and dogs bringing sheep in to the sheepfold. It was fun to watch, even at a distance but one of the dogs had managed to corner the sheep on quite a precarious precipice.

I kept an eye on the progress as I climbed, reaching false summits (should have known they weren’t the top as I reached them too quickly). I am still not sure which one was Dead Pike but the peak of Steal Fell was obvious…and the cold wind was quickly and brutally sapping the heat from my body. 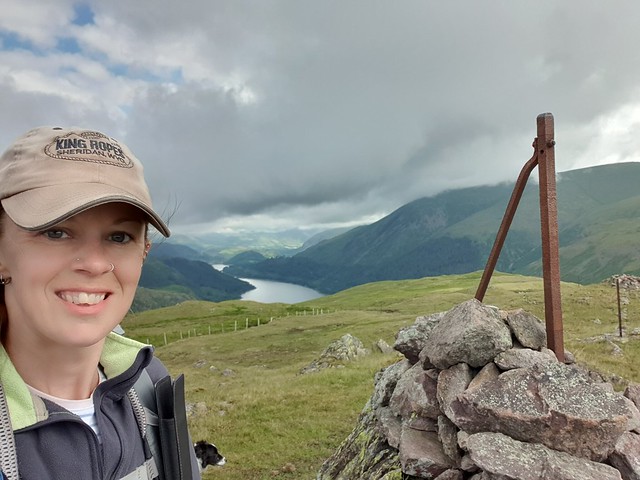 We dropped off the top and the wind immediately quieted a little. Another cairn was ahead, not more than 30 yards away. I am not sure exactly which is the official summit but we touched both. Wainwright number 8 done.

We paused at a point well protected from the wind and almost half way around the horseshoe for a snack. And just as we were settled a chill rain came through. The poncho was hastily pulled over me, gear and pack…and camera…and we waited out the 15 minute shower while staring at superb views.

The weather continued to threaten throughout the rest if the morning but despite me donning my full rain suit for a bit we experienced no more than a few sprinkles of the wet stuff. 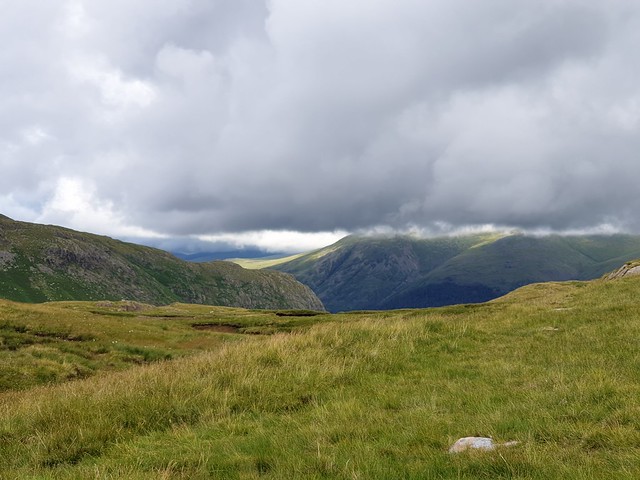 There might not have been much water coming from above but the ground underfoot more than made up for it. From just below the summit of Steal Fell the ground was nothing but peat bog. Gortex trail shoes didn’t help much in those conditions although they did initially help keep my feet dry…they just weren’t up to THAT kind of challenge. 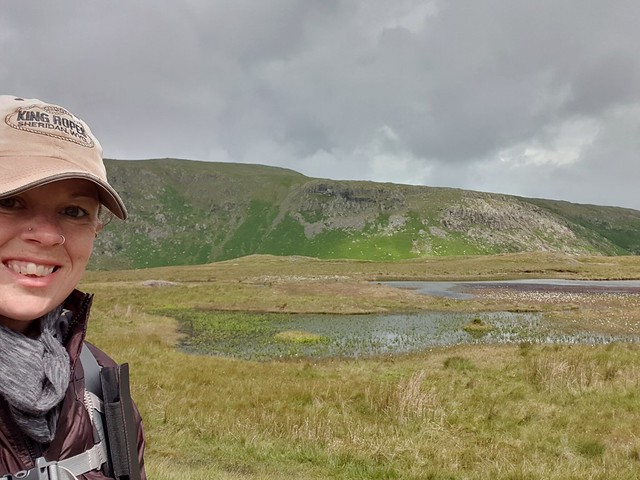 We managed to mostly stay on the less wet parts and water never made it over the top of the rim of my shoes. The few rock outcroppings and mounds between the bogs were welcome islands of relief, despite the rocks and some scrambling. 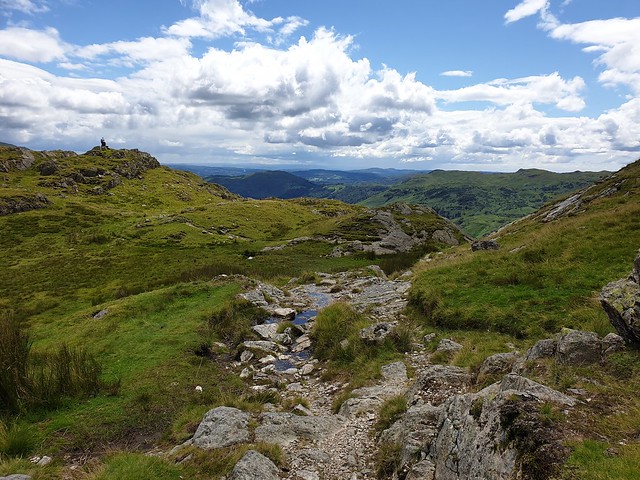 We summited Calf Crag and followed a faint trail by various pikes and mini-peaks to Gibson’s Knob (?), both of which I believe are Wainwrights. More of the same followed…descent to boggy area, rocky climb to dry area and back down again…and repeat. 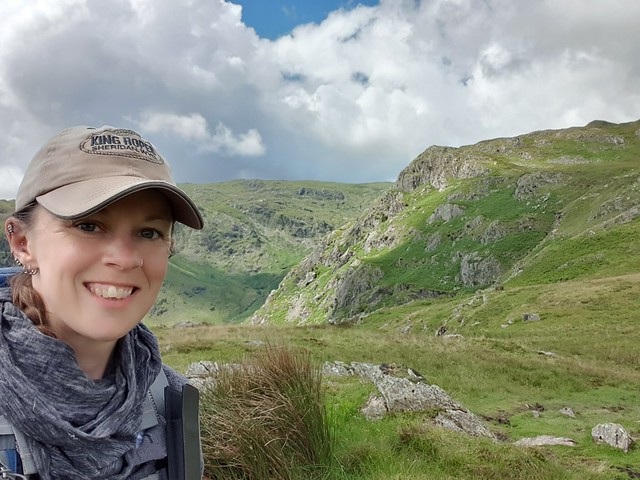 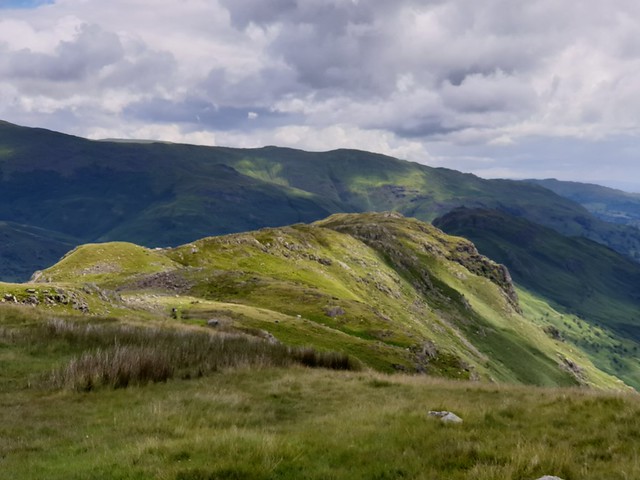 The final ascent took us to Helm Crag, home of the iconic and well-known rock formation The Lion and The Lamb…a gorgeous picture of which can be found here by landscape photographer Henry Turner:

(Credit to Henry Turner. Print can be bought here: The Lion and the Lamb – Limited Edition Photo) 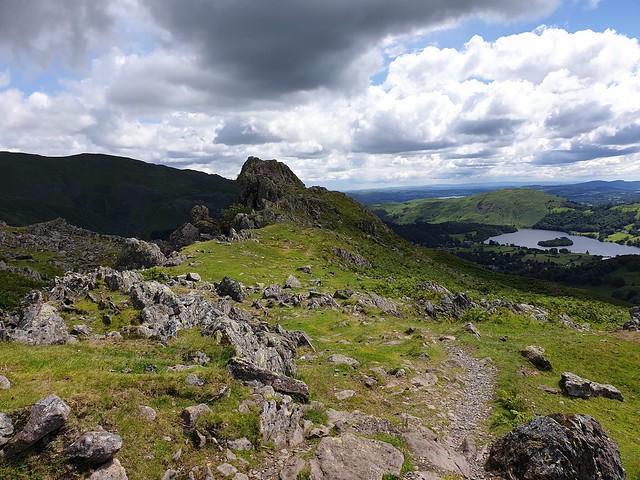 We didn’t get the best views of the rock formation (and certainly not as good as Mr Turner) and the one place we did see it well I forgot to take a picture…I was too busy taking video. Just below the crag we took a lovely long break with views over Grasmere…it was such a perfect moment with amazing weather…it had be so changeable it was nice to have. 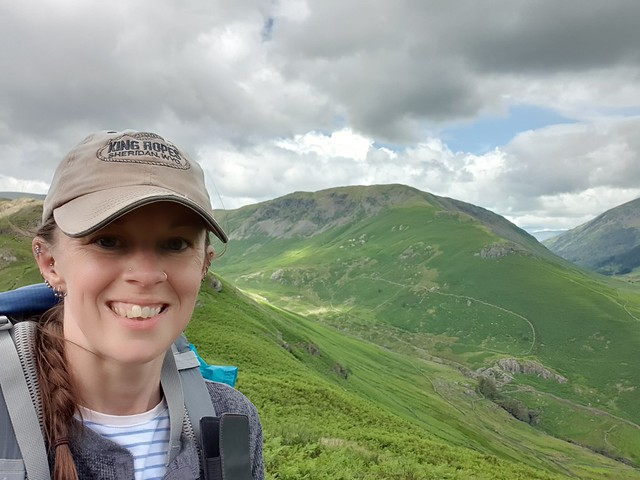 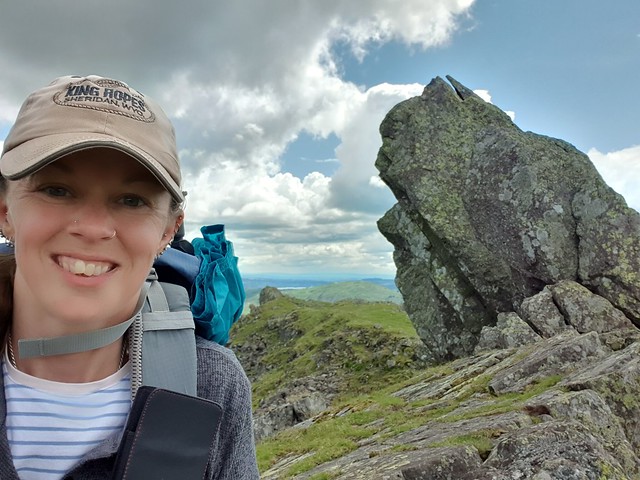 I check with some passing hikers about the best way down as there were two routes…the direct one was very much not advised. The “easy” one was still tough and rocky so I can only imagine how tough the direct version was…I was glad I had asked. Compared to the descent from High Crag, however, this one was a walk in the park. 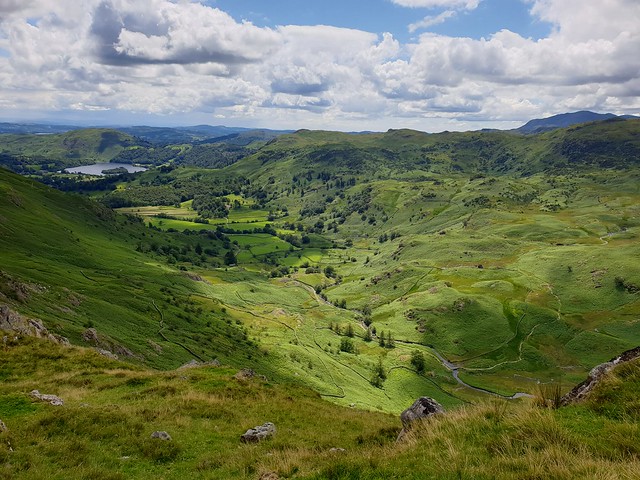 The trail dropped us in to Grasmere where I enjoyed a pint of Hop House 13 on the patio. There was no pub garden, but it was enough to be a good end of the day…well that, and some famous Grasmere gingerbread as well as an ice cream. I definitely splurged!

You can watch the whole amazing hike from Steel Fell to Grasmere here: