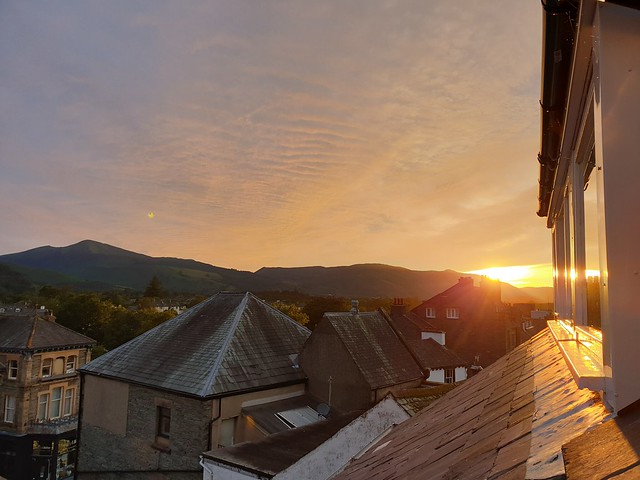 Back in Keswick for two nights I had planned to hike part of my original route with my friend Dave. Instead we did a long 16 mile route as a day hike.

While I prefer to start early, my version of early and someone else’s often aren’t the same. We were still at the parking area and hiking by 9am which was well before most people. 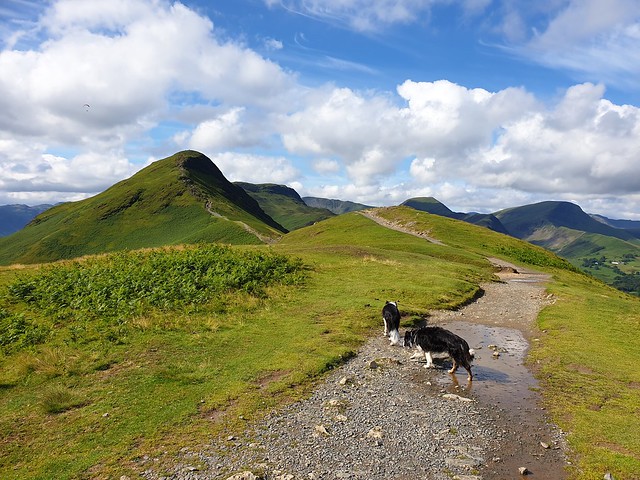 The initial climb to the top of the first bell of Cat Bells was moderate and well-graded with gravel underfoot. It was a good leg and lung work-out and I was pausing often to admire the view, at least that was my excuse. And the views over Derwent Water and beyond to Blencathra, Skiddaw and the Helvellyn Range were quite something. 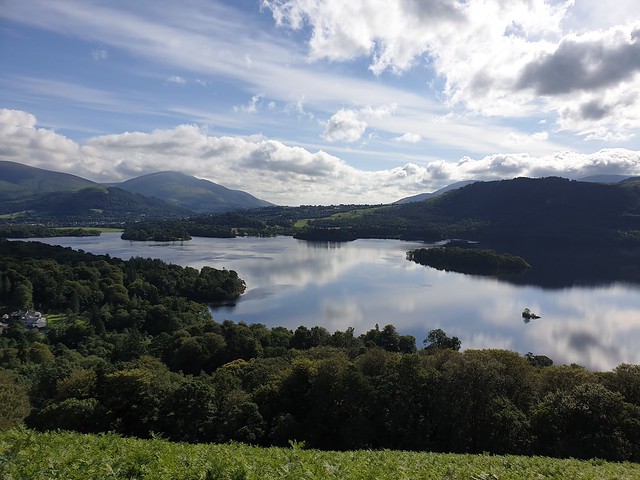 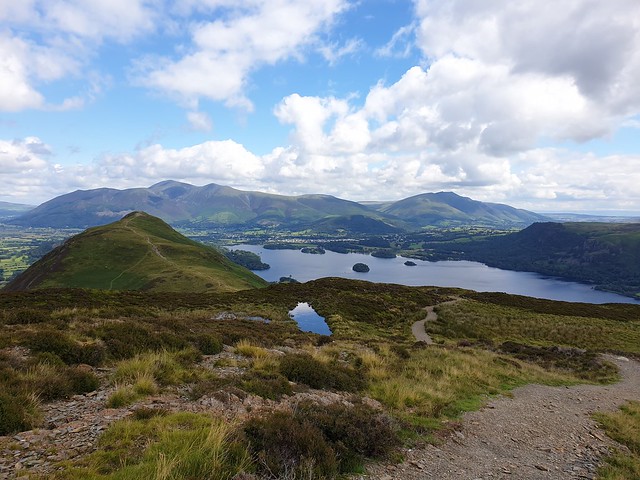 There was a bit of rock “scrambling” to the get to the top of both the first and second bell at the summits and once again we paused to enjoy the stunning 360° views. The climb to Maiden Moor, which looked flatter on the map and at a distance, now looked quite imposing to climb. However climb it we did and touched the cairn at the top. And then on to High Spy where we stopped for lunch. 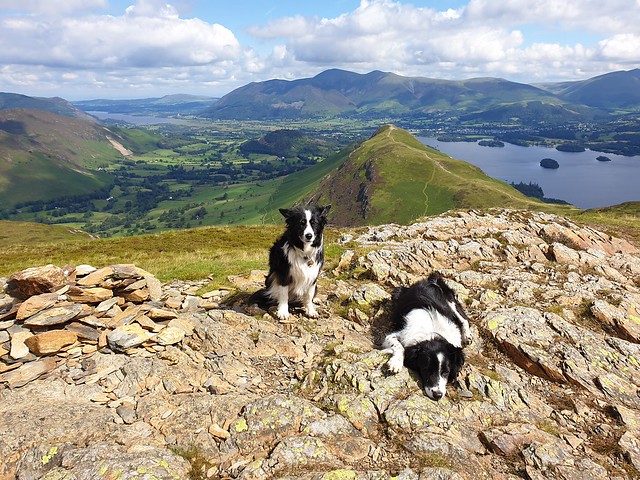 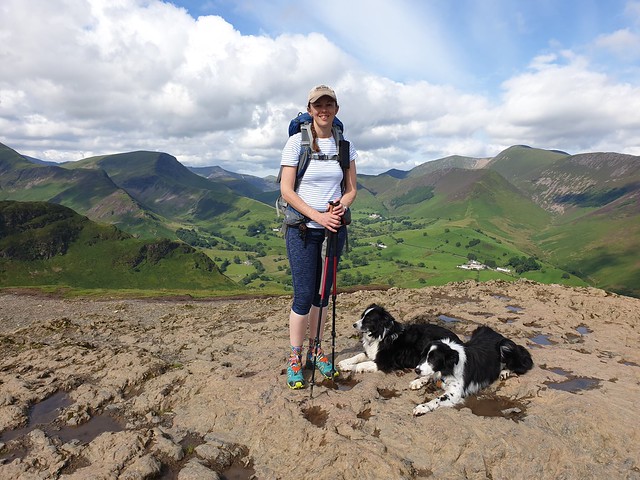 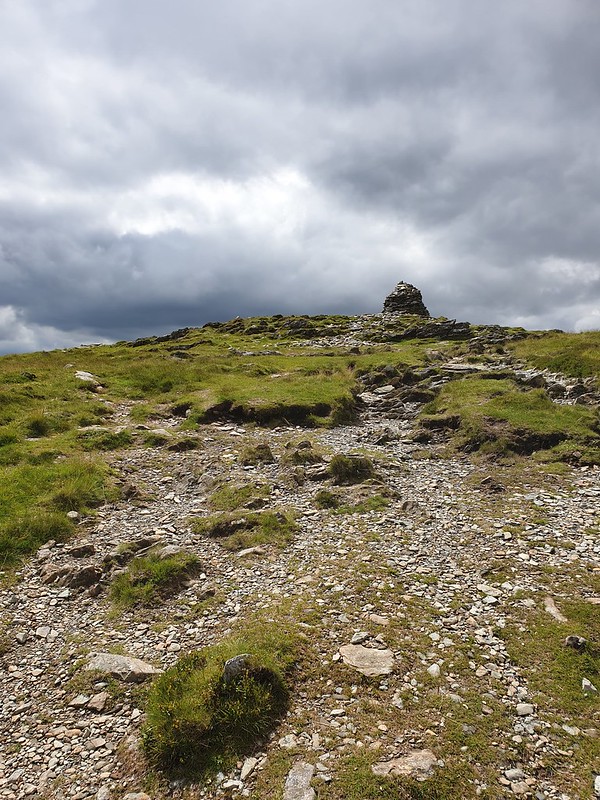 Most of the trail so far had been really great and I was enjoying having someone along who really knew the area and could point out all the interesting things, and where I had been a couple of days prior on the ridge of Red Pike and High Stile. We enjoyed a lunch of leftovers while gazing up at the massive peak of Dale Head. I was quite thankful we hadn’t added that to the list of peaks for the day as it was a long way down to go back up again. 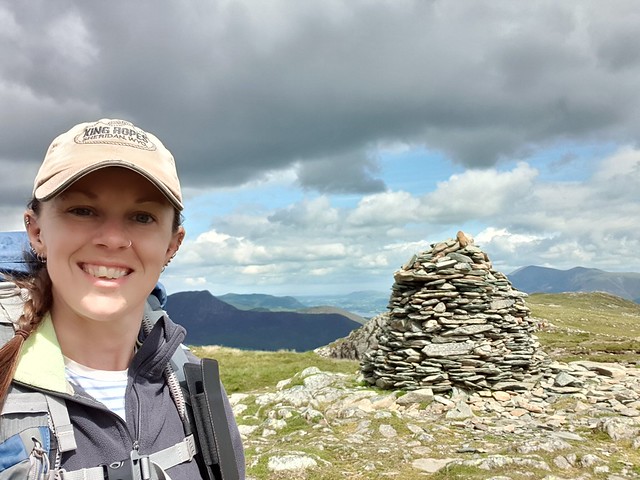 The trail led us through a valley with the remnants of old slate mining works. It was quite tough going but no where near as bad as the descent from High Crag. What actually made it difficult was just how stiff and sore my legs were feeling from that hike. The hike down wasn’t too bad but I was glad to hit more moderate trail. 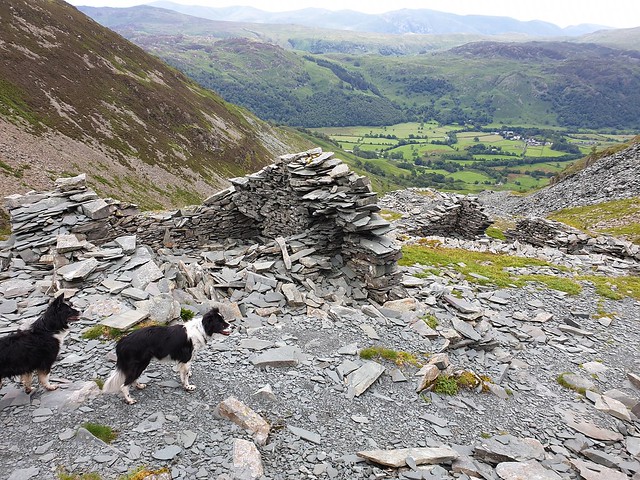 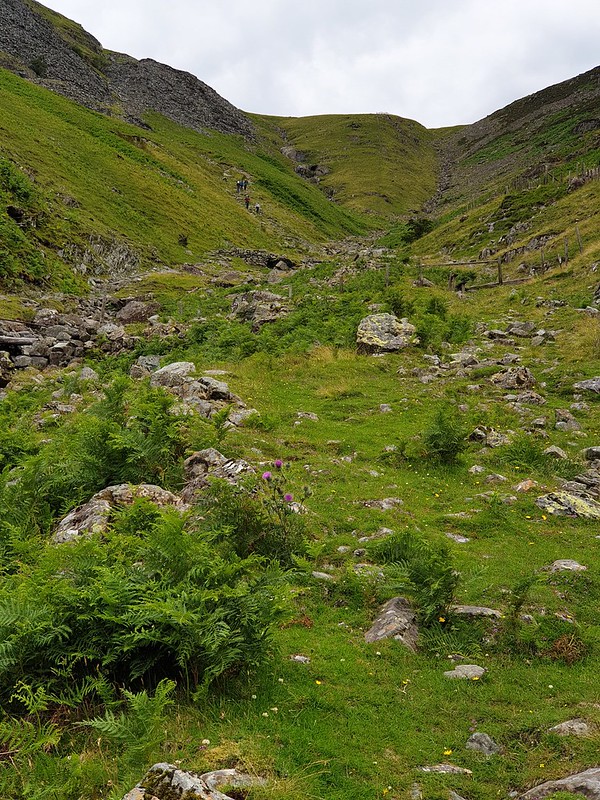 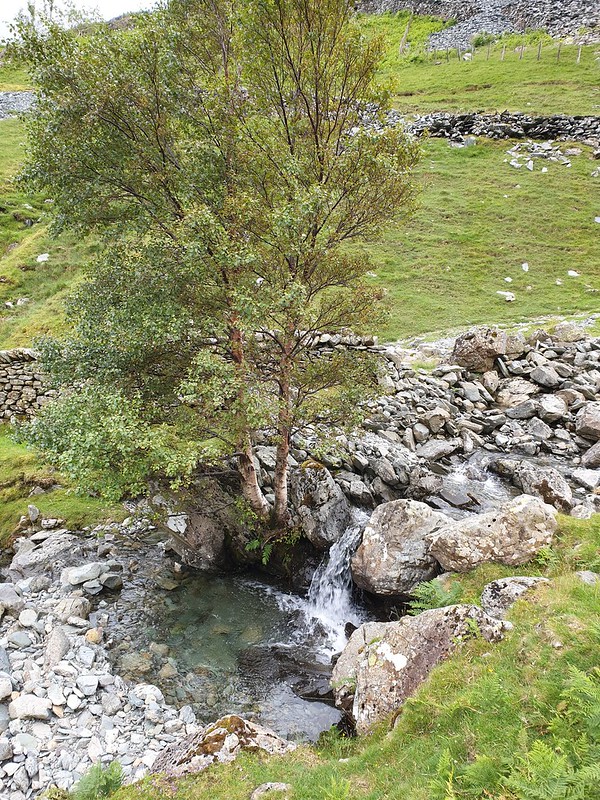 Of course, when faced with a long hike home but one more small Wainwright in front of you, you always choose to climb some more. I was definitely tired at this point but Castle Crag was so close and on our route home. 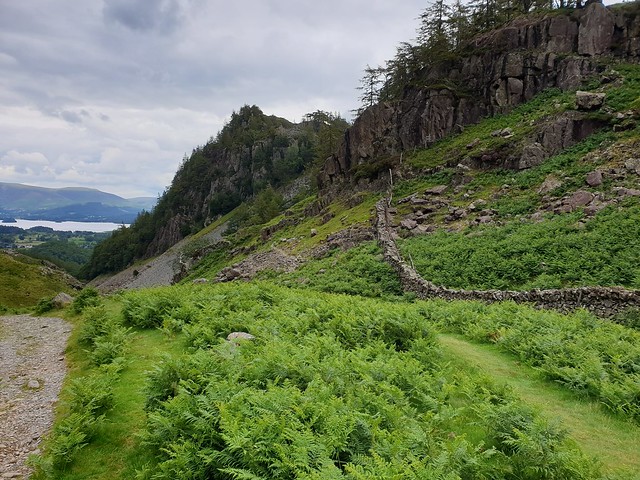 So up we went, climbed a couple of ladder stiles which the dogs found particularly tough to descend from, had a snack break while waiting for a young family to climb the shale pike, and then up we went. It was a decent path up the spoils heap although a little slippery in places because of the shale itself. It actually looked worse from the bottom than it was climbing up it. 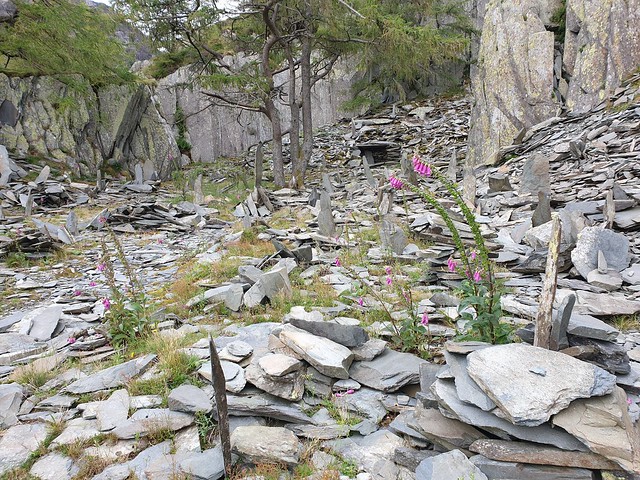 Close to the top we check out the old quarry where people had built their own little slate monuments…and there were a lot of them…and added our own. Some were quite large and elaborate and others were small and discreet; mine was the latter as I was out of oomph to do anything more.

One more short climb took us the top of Castle Crag where we once again looked out over Derwent Water. A quick picture taken atop the pinnacle rock of the peak and a perusal of the names of WW1 soldiers from the area who had died in the war and we started our descent. 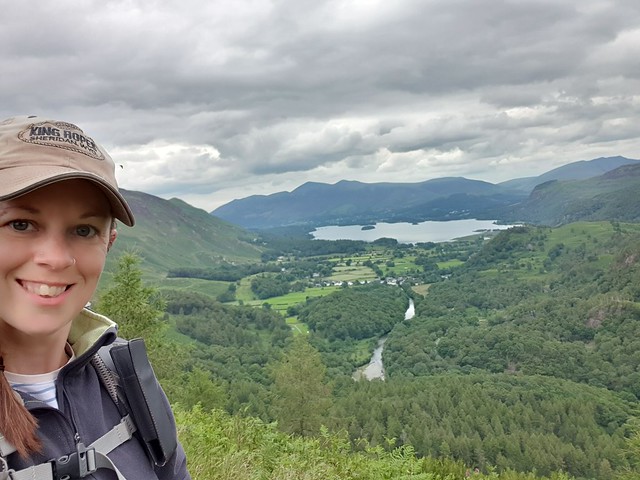 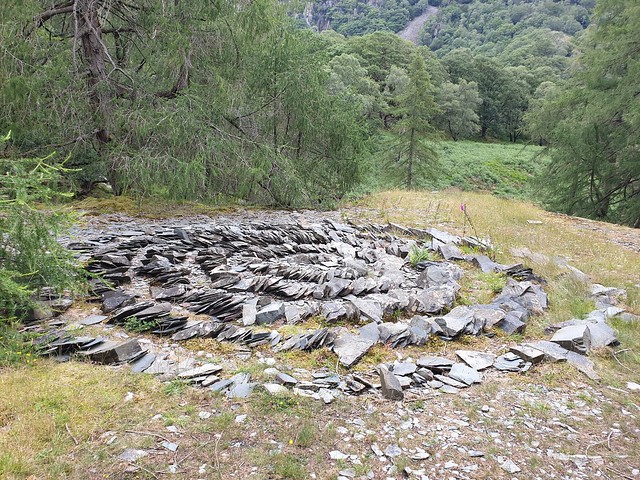 At last on flat ground and wide and easy path we still had another five miles to hike. Our reason for coming the back way off Castle Crag to the river rather than going back on ourselves was was to check out the cave of Millican Dalton, a local “mountain man” who used the cave as his home, off and on, for several years. The cave is an old quarry and is two chambers; a main large one and a small upper one where Dalton had his bedroom. At the center of the large cave was a stone firepit and seating. 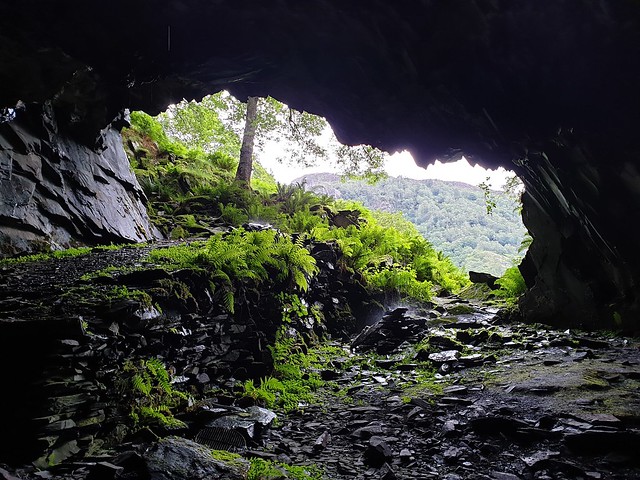 A book written about Millican Dalton’s life was actually performed as a play in the cave for a couple of nights. I can’t barely imagine how much work it was for all the stage crew to haul all the lighting and sound equipment up from the road by foot.

From the cave we followed the languid and clear River Derwent that looked so inviting. I wanted to fish it (which is free to do in most places in the Lake District with a few exceptions – rod license still required) but of course I, very sadly, didn’t have my fly rod with me…next time I will. 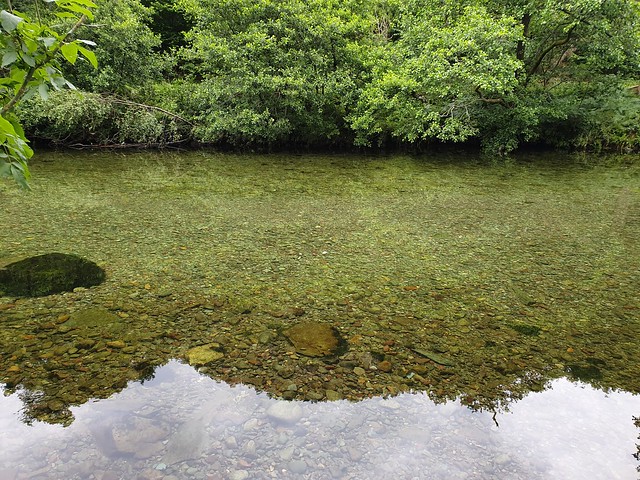 Despite not being able to fish we did stop. The dogs played in the water for a while, chasing pebbles that were tossed for them or, in Kye’s case, dragged big rocks out of the water. She would loosen them with her paws and when it was shallow enough she would dunk her head under and getting a hold of them with her teeth before bringing them to shore and leaving them there. To this day I still don’t know why she does it. 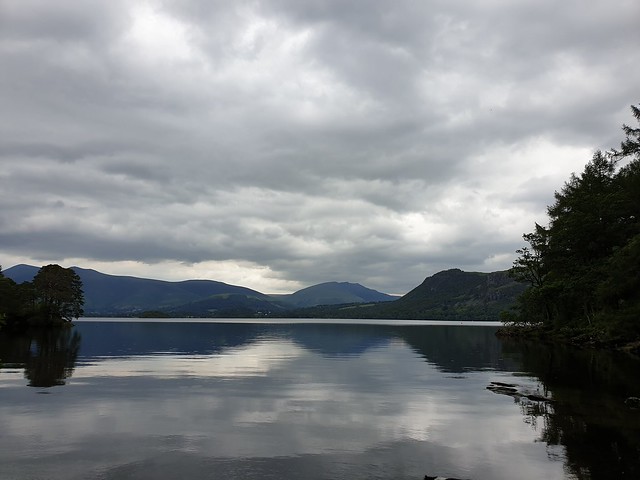 A quick stop at “Bear in the Window” to read some of the letters and postcards sent to the teddy bear in the window of a shed. Years and years of correspondence were shared with the world to read and enjoy. Such a lovely spot of humanity in the world to connect through a bear. 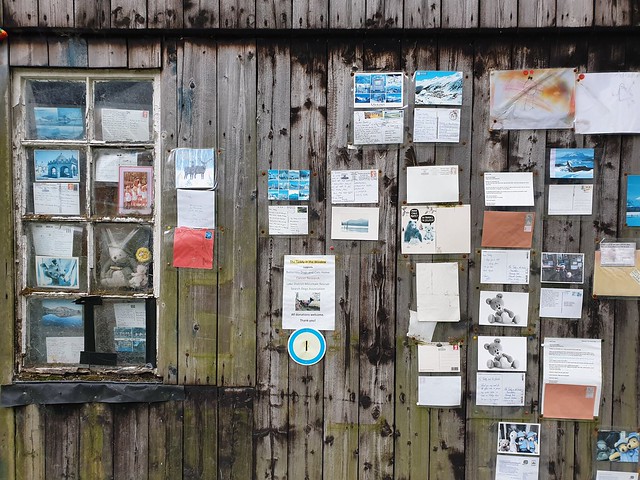 We passed the famous cupped hand which were no longer where they were supposed to be. High waters had moved the wooden hands 100 yards closer to Keswick, and closer to the shore. I wonder if they’ll get moved back and secured better. They are supposed to sit in the center of the round stone circle in the bottom right of the picture: 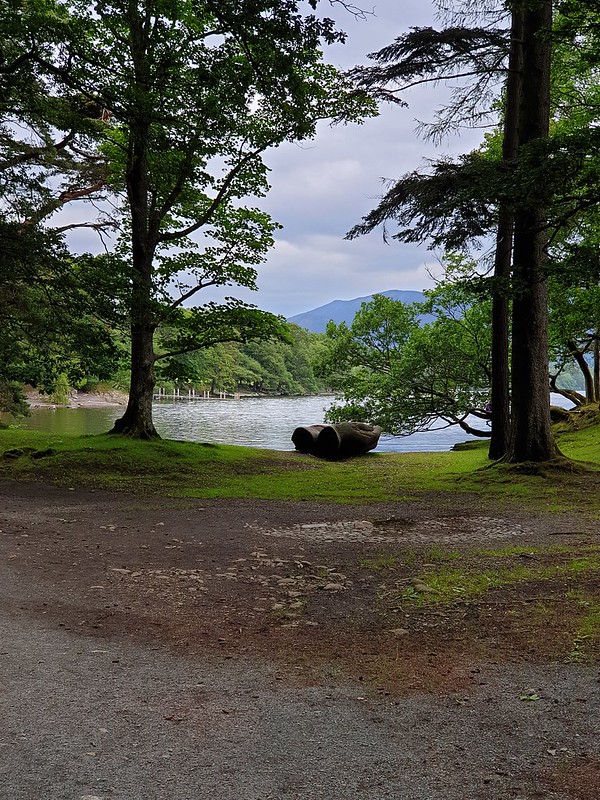 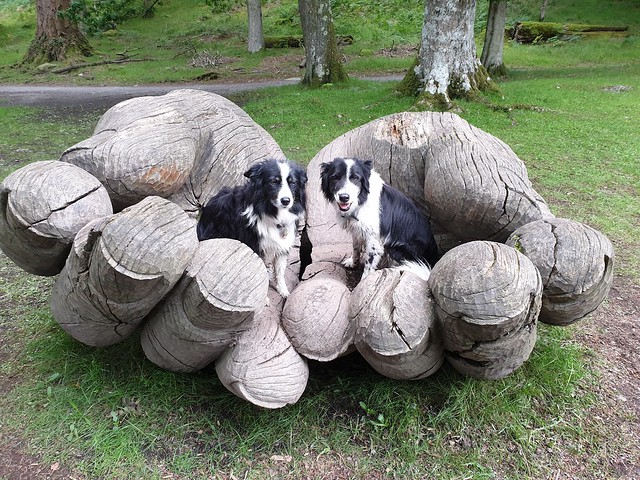 With a beer and pizza calling our name we hurriedly covered the final few miles back to the car. Views over Derwent Water from ground level were just a lovely as from above albeit quite different. The rain was just starting to come in as a light drizzle as we reached Hawes End Outdoor Adventure Center. We were thankful for the cover of the trees as it steadily increased and we were both thankful to reach the car only slightly damp.

And beer and pizza definitely finished out a long and exhausting but absolutely amazing and beautiful day.