Last night was still pretty warm but I slept well and managed to doze until 8am, Wyoming time. I’m still running my own schedule on Mountain Standard Time, even if it is wrong around here; Pacific Time is one hour behind Wyoming. I have my phone to keep me otherwise informed.
I left this morning around 9 o’clock and wished the three girls good luck on their cross-country trip to New York. I had recommended going through Wyoming instead of eastern Montana and North Dakota…which is obviously no one’s ideal choice! 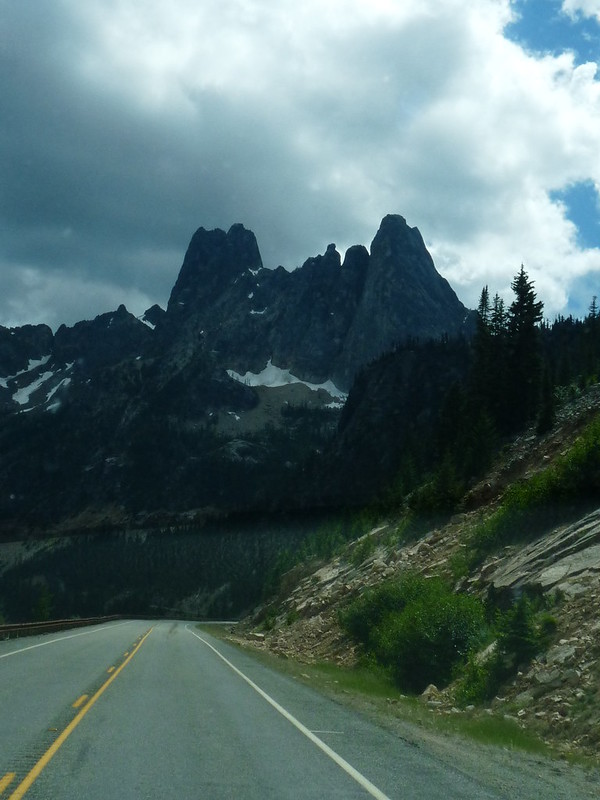 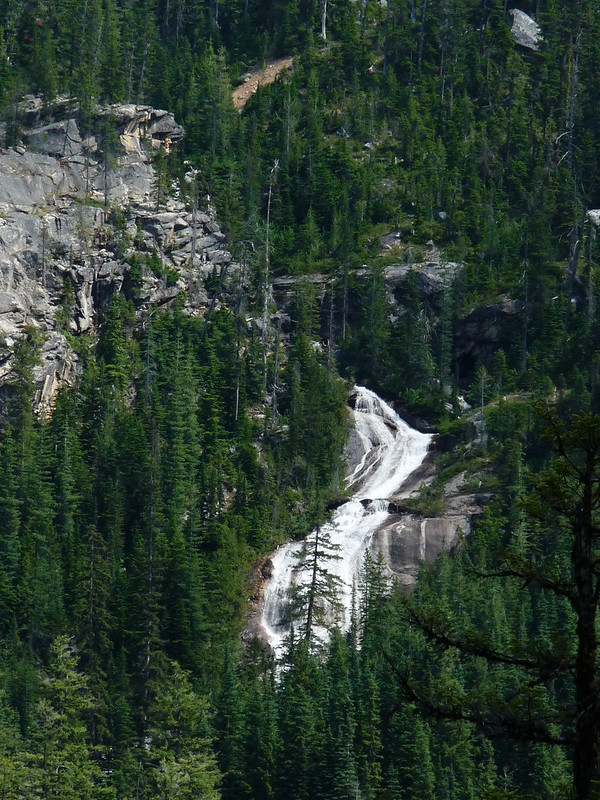 The Northern Cascades are pretty stunning and it was well worth taking the time to drive through them slowly yesterday and this morning. I took the highway south from Roberts to Arlington via Darrington. As I drove I noticed a large slide area with piles of dirt and trees piled high. I made an educated guess that I had passed the place where the deadly mudslide happened in 2014. A quick look at Wikipedia and I confirmed I was in the right location. It got me thinking about how short life can be and it is for that reason that I do these road trips each year. As I drove by the town of Oso I said a quiet prayer the lives lost or forever changed by the tragedy.

I stopped for lunch at McDonald’s as I was insanely hungry and didn’t care too much about what I was eating at the point. We found a brief respite stop in Carnation, Montana where the dogs played ball and got to relax while I did some writing. 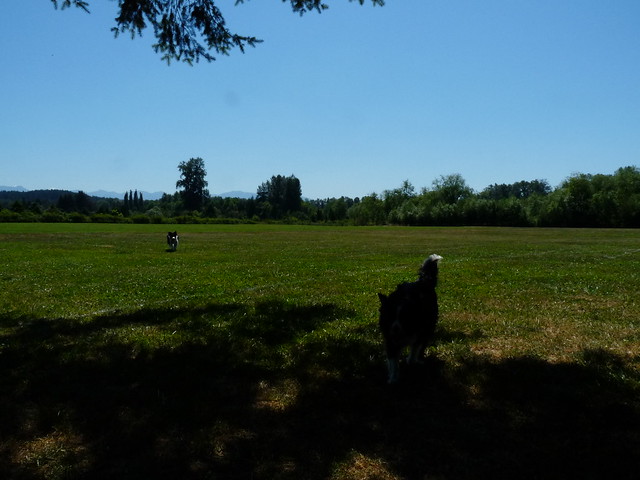 They (especially Kye), however, are getting bad about responding to their recall when I call them by name…which means that the shock collars had to come out. Of course, as soon as they are put on the dogs they know and behave perfectly without me really even needing to use them…border collies really are too smart for their own good sometimes. 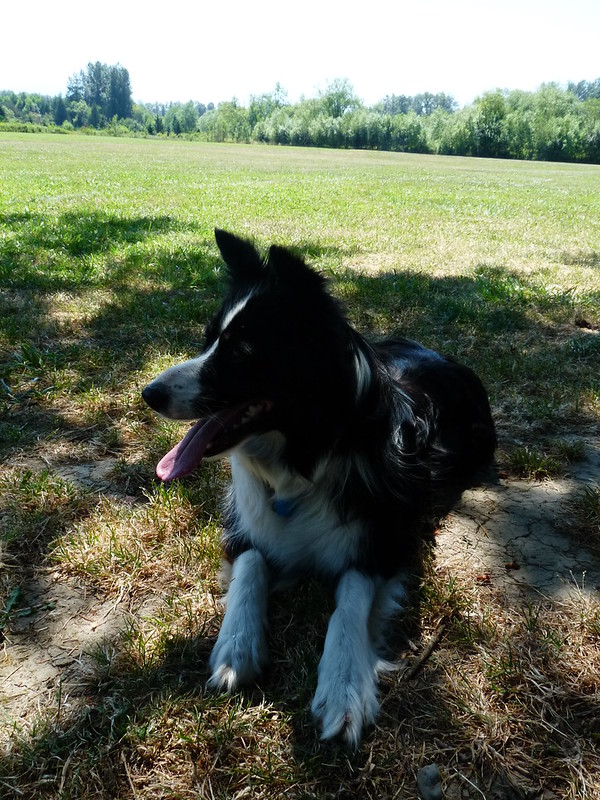 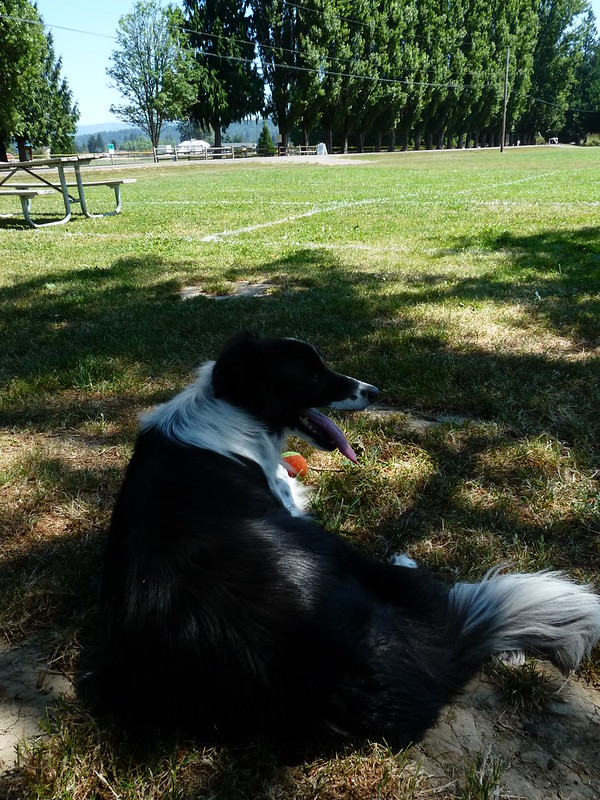 We didn’t have long at the park as our quiet reverie was interrupted by a couple of families with kids and that wasn’t really how I wanted to spend my afternoon. While I understand the joy of spending time with your kids in the park, this place was huge and they HAD to choose to park and picnic right next to me. I was definitely irked and irritated by the lack of consideration so I packed up my tablet, the dogs and moved on.

The plan was to then to travel east a short ways on Interstate 90 to camp in the national forest but every exit off the highway seemed to require some sort of pass that had to be acquired in town…not so great to know after the fact for an out-of-stater for Washington. My original thought was to try Stampede Pass, which I vetoed initially because of the amount of exits for NF roads…however I returned to this idea even though it was a little further than I wanted to go from the Seattle area. I drove around for a while, going to the top of the pass and to Lost Lake and finally found the most incredible campsite alongside the creek, not far from Keechelus Lake. 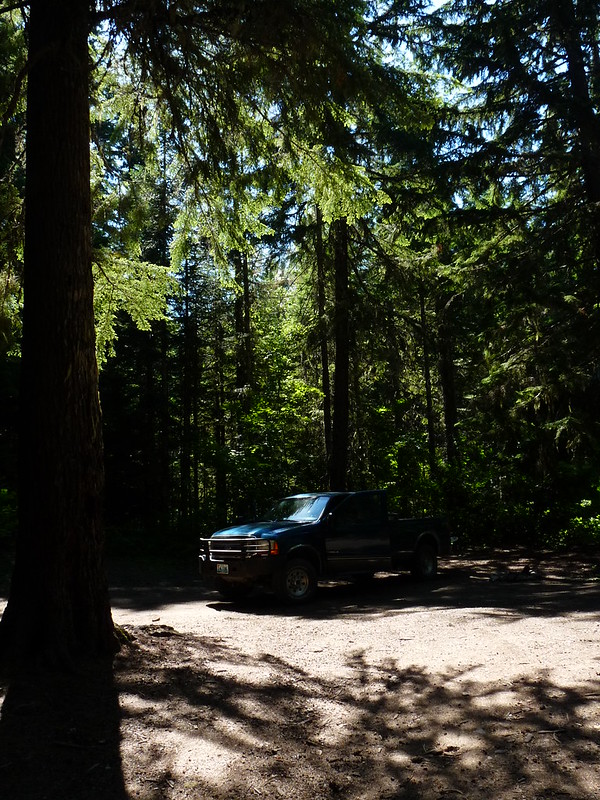 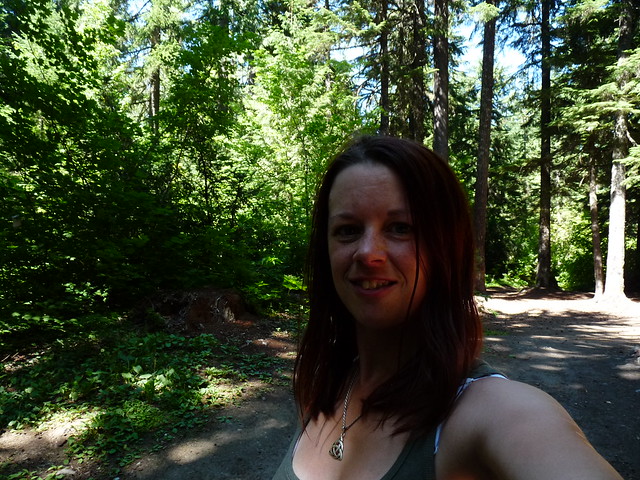 It wasn’t quite as open as I usually prefer (grizzly bear paranoia in the deep dark woods and all) but it was beautiful and quiet and shaded. The dogs played in the water while I found some brown frogs sunning themselves in the shallow pools and just knew I had to get some pictures of the critters. Two were about an inch long but a third was at least double that…and all were very considerate of their pictures being taken. 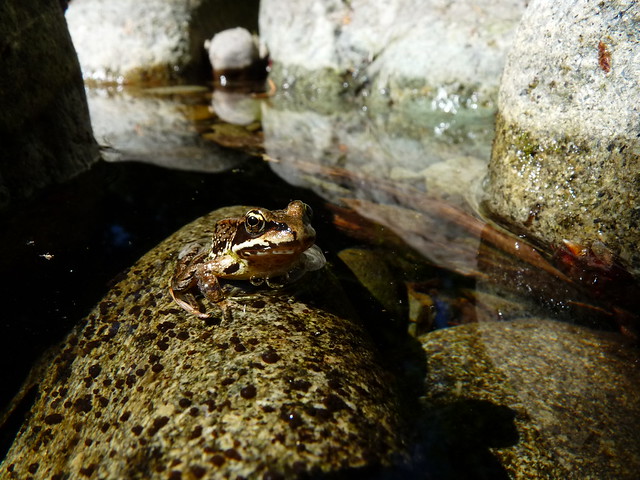 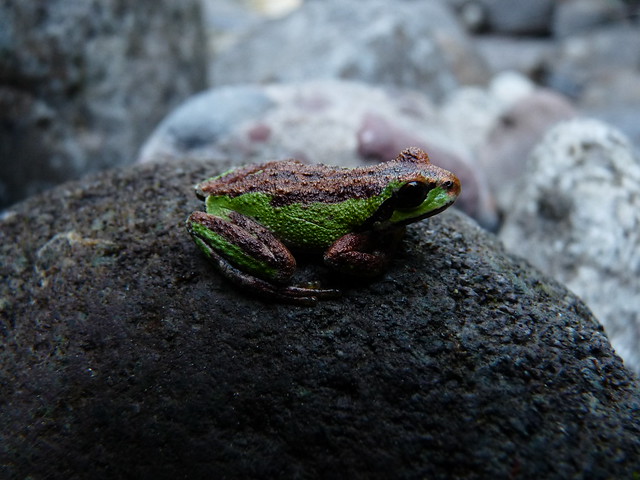 It was getting to be 5:30pm, Wyoming time, and we spent some time just relaxing in the shade or playing ball. The hope was that the night would be a good night for sleep as it was beginning to cool down…the heat was just about killing my ability to sleep well. I’d almost have taken the mosquitoes if it had meant cooler nights…almost. 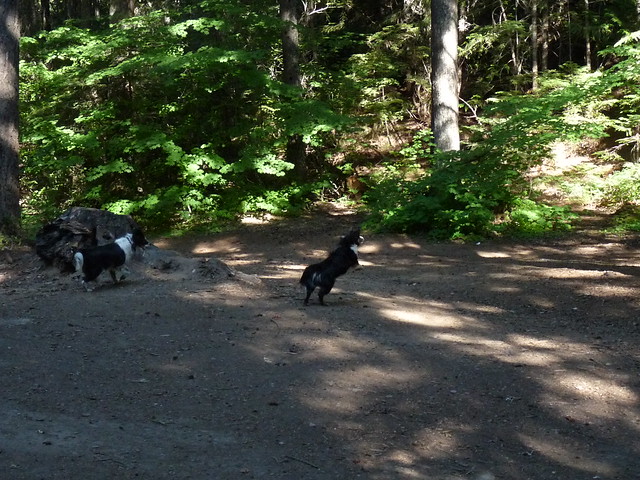 After relaxing for a while, eating dinner and drinking a beer we took a walk along the “main” road just beyond the view of the camp. 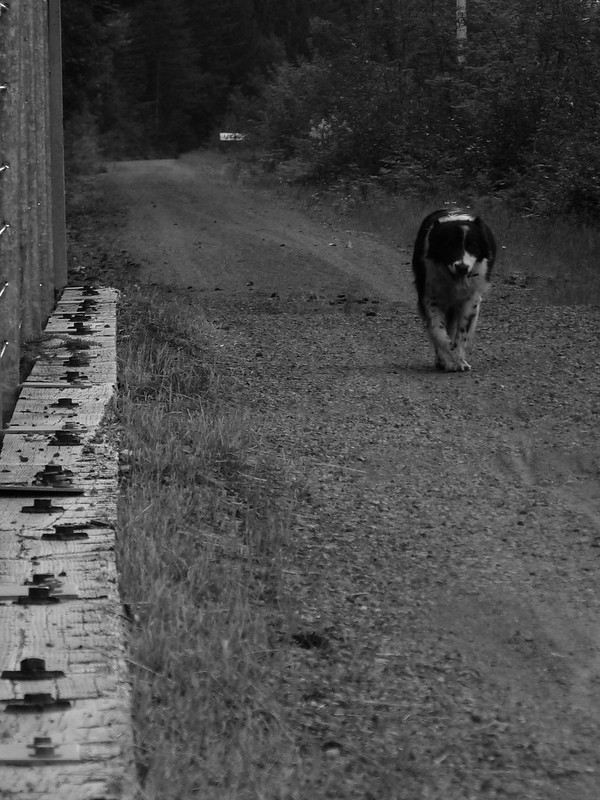 After the short walk and chance for some really nice photographs we went back to camp so the dogs could play in the creek and I could chase frogs. It was a lot of fun trying to be sneaky with the frogs to catch them, and in the end I only caught two. They were pretty calm once they were being held (with cold, wet hands of course). I also came across a rock that looked a little like the face of a hippo. 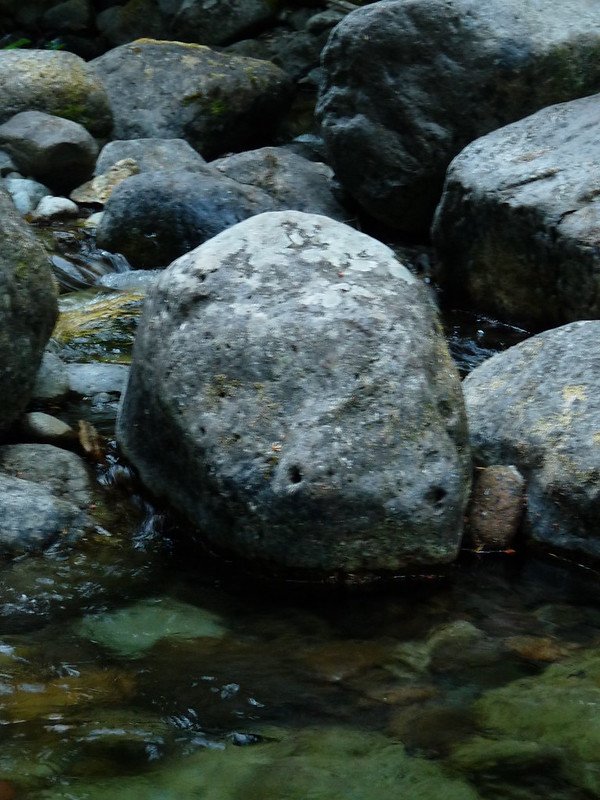 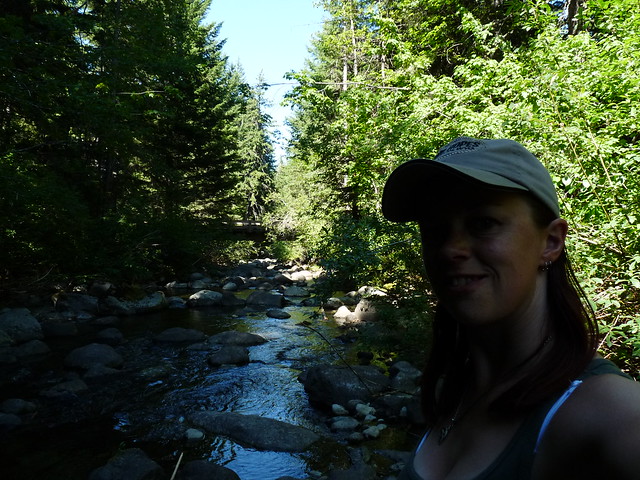 This place was definitely one of the best camping sites so far, not only because of the location but because of the memories I created with the dogs, the frogs and the view.