Day 13
Great night…cool and slept well for the most part. The bed can be extremely comfortable once you get used to it, and it is just big enough to be comfortable for someone with my 5’5″, 120# frame.

I got an early start this morning and headed towards Spirit Lake and Mt. St. Helens. The drive was pretty and the volcano is both awe-inspiring and ever-so-slightly nerve-wracking with knowing its history.

Before I came on this roadtrip I watched a couple of documentaries on Mt. Rainier and Mt. St. Helens:

Knowing the immense power that lies beneath these mountains, and what kind of destruction they have caused before, and will again, makes you feel extremely insignificant and fragile. Being in such close proximity to these volcanoes I was a little nervous (despite living in the same state as the super volcano known as Yellowstone). The closer I got to Mt. St. Helens the easier it was to see the destruction of the eruption, even though it had been more than 30 years. Information boards along the road, in pull-off areas, helped to explain the distances the pyroclastic flow, ash and lava traveled, and exactly what effect they had on the landscape. 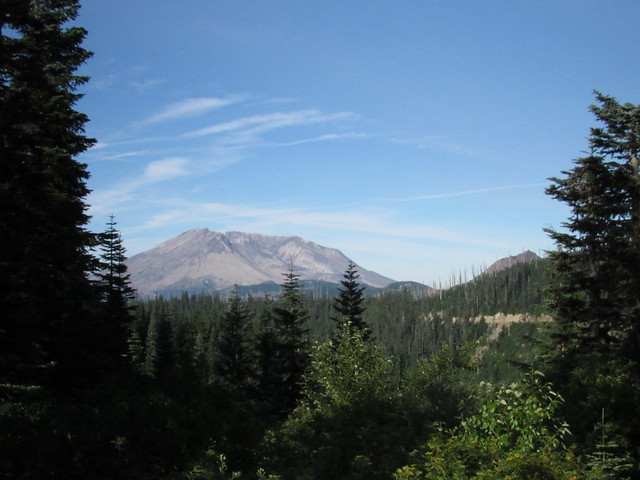 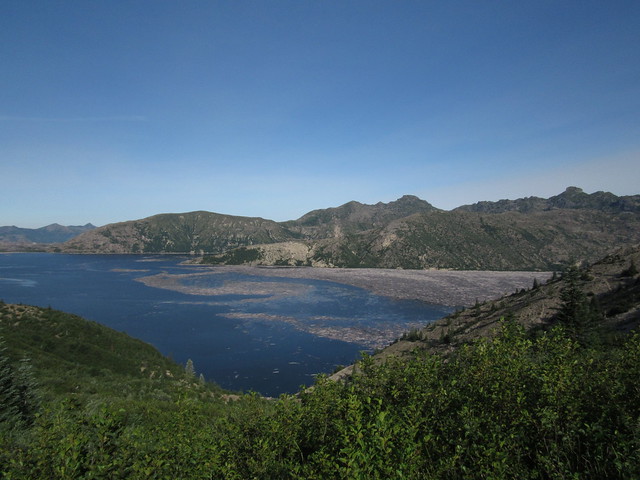 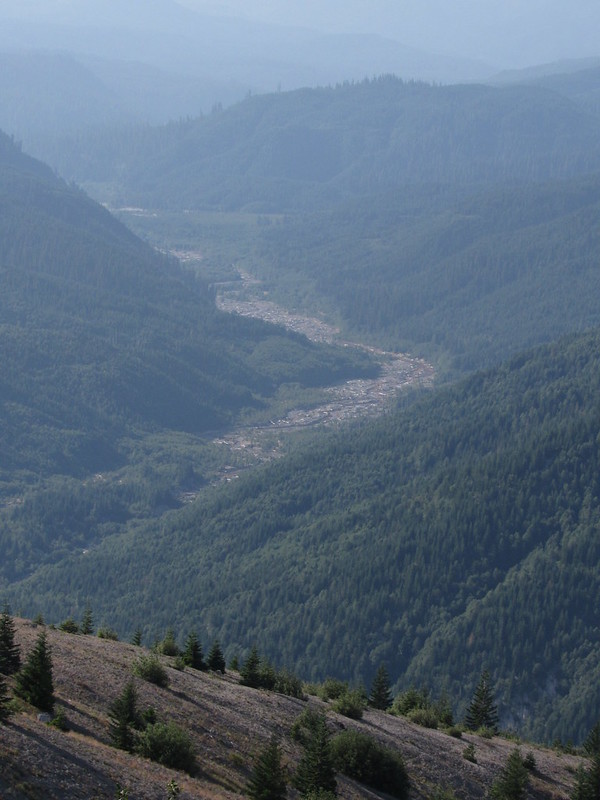 From Mt. St. Helens I headed south to Carson, WA and found the most perfect camping spot…and would have stayed if it hadn’t been 11:30 in the morning and I hadn’t desperately needed an internet connection. Of course I wouldn’t have found it at all if it hadn’t been the day for wrong turns and many miles of excess driving and fuel consumption. 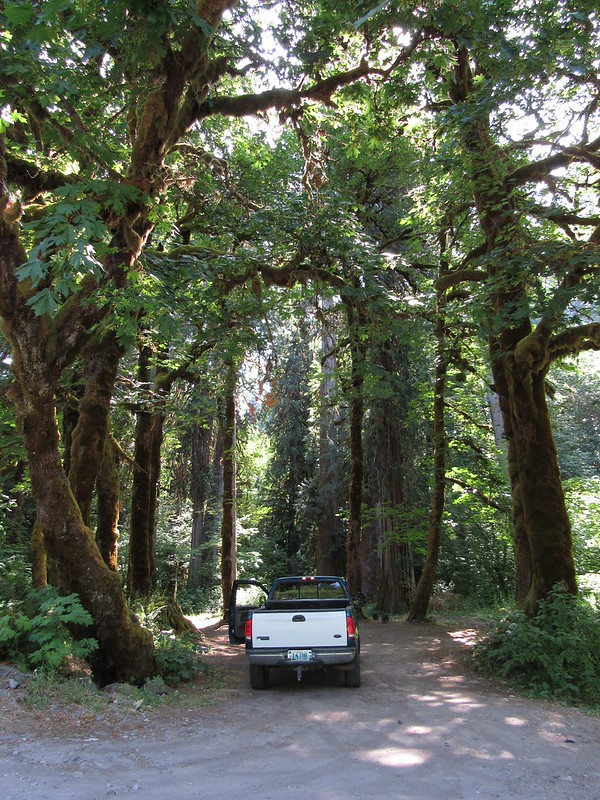 We spent a few minutes in the creek to rest and take a much needed break before continuing many miles the wrong way. Thankfully it was a mostly-paved road and I didn’t travel 10 miles on rough dirt roads, and back again. 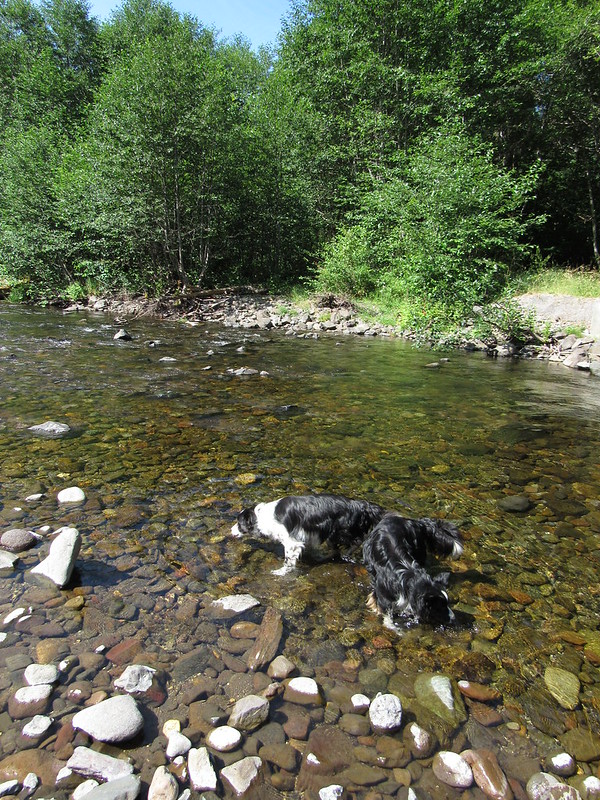 Coming down from Mt. St. Helens I got some great views of Mt. Adams and Mt. Hood (the highest point in Oregon, and also looks like the Lonely Mountain from the Hobbit movies which gave me goosebumps). From Carson I traveled east a few miles, along the the Columbia River. I had crossed this river once after I passed through Kettle Falls. It had definitely grown in size since that point. I stopped briefly to watch the para-sailors and wind-surfers on the water just down-stream from the Hood Bridge. It was definitely fun to watch. 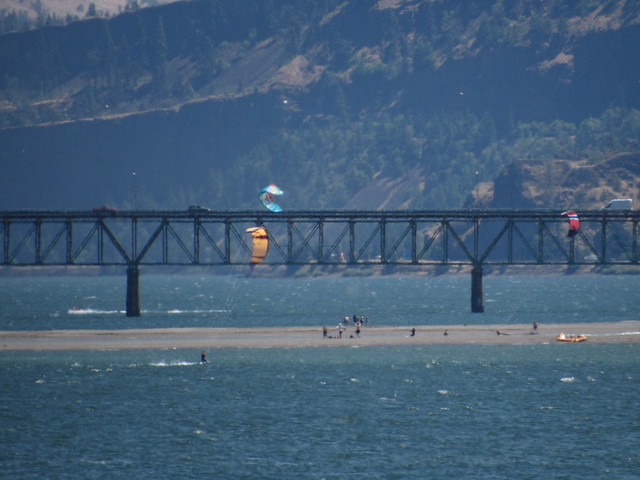 I got fuel and McDonald’s (again, hungry and it was the only drive-through in Bingen or White Salmon) before I headed north again, through Trout Lake to look for a campsite for the night. Another wrong turn that lasted for a few miles before I finally got on the right road, back towards Carson. I learn quickly that I was following the McClellan Trail and stopped at an ice cave and some natural bridges, all along the same system of lava tubes and formations. The ice cave was bitterly cold and it was a nice reprieve from the 90 ́ weather at the surface. I didn’t go too far in as my flashlight wasn’t great and I was alone, but it was definitely cool to see. A few miles down the road were some natural bridges, although the information about the creation of these structures wasn’t very well explained. 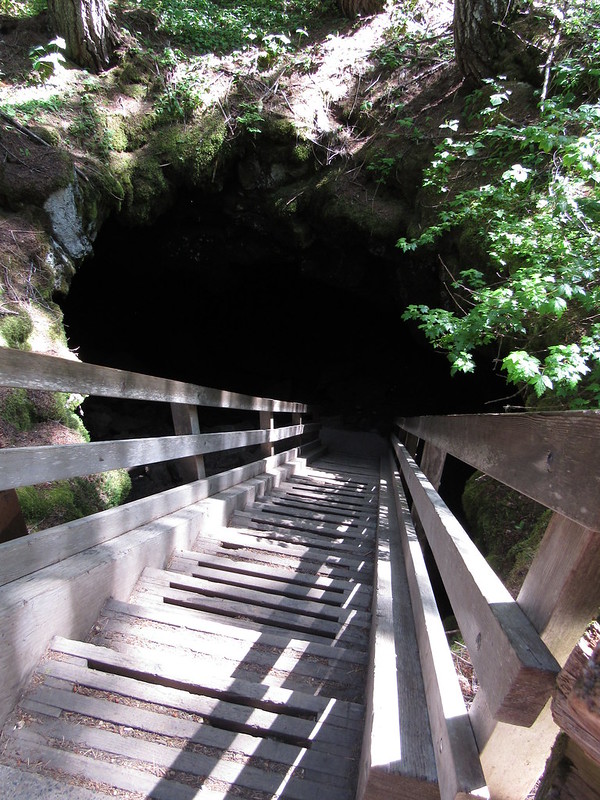 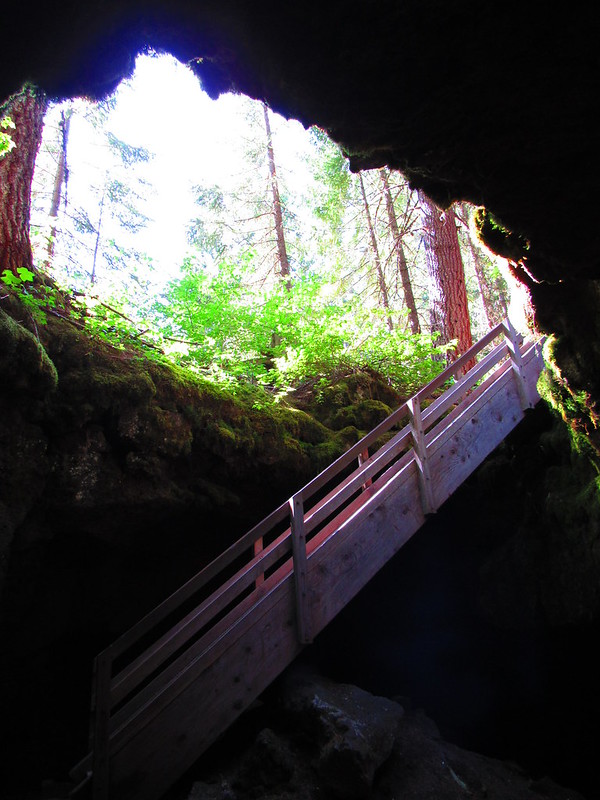 You can learn more about the ice caves, natural bridges and the McLellan Trail here. 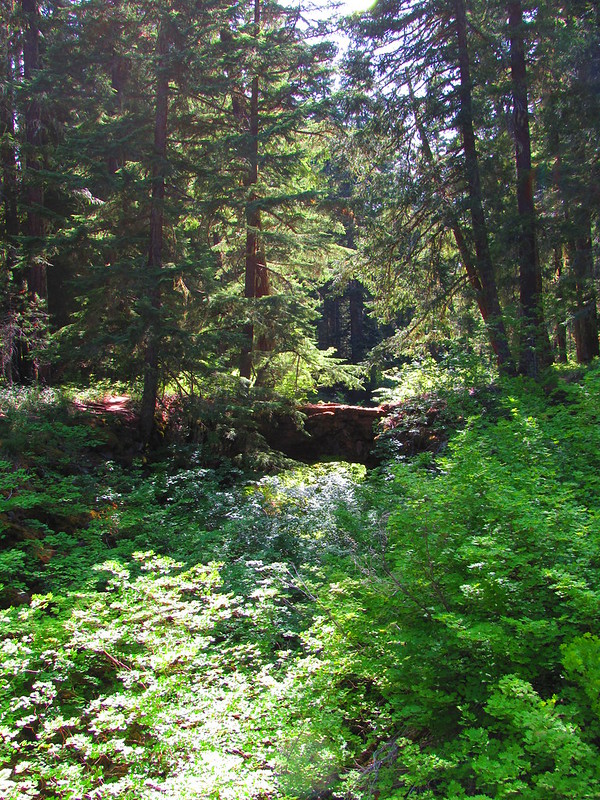 I continued on to Goose Lake, which was also part of the McClellan Trail, and found a nice, shady campsite a short hike from the lake. After I parked, the dogs and I took a walk to the lake and played for a while. The fish were jumping a good 6″ out of the water to get the fresh hatch of flies that seemed to be abundant. I saw at least a dozen fish jump within a 40 second period…it was crazy, and how I longed for my fly rod and to be fishing at that moment. 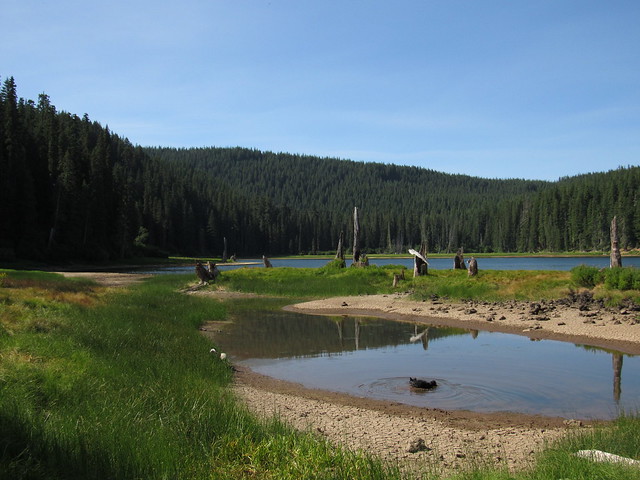 We returned to camp and I took a picture or two of the lava beds/ formations that lined the trail, as well as of another great campsite that would be ideal for anyone tent camping. 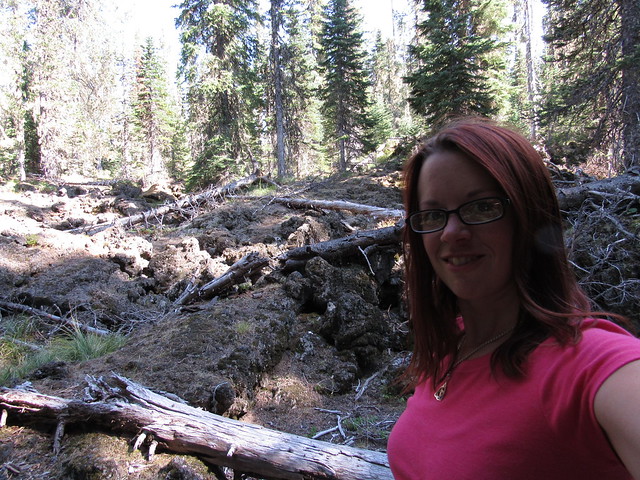 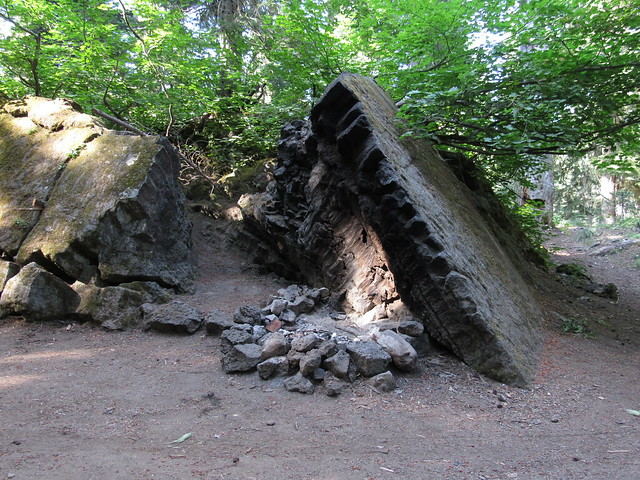 Sadly I had a neighbor in my camping area, although they were through the trees a ways, but they had kids and weren’t the quietest group of people in the world…although at least they weren’t wild party revelers. 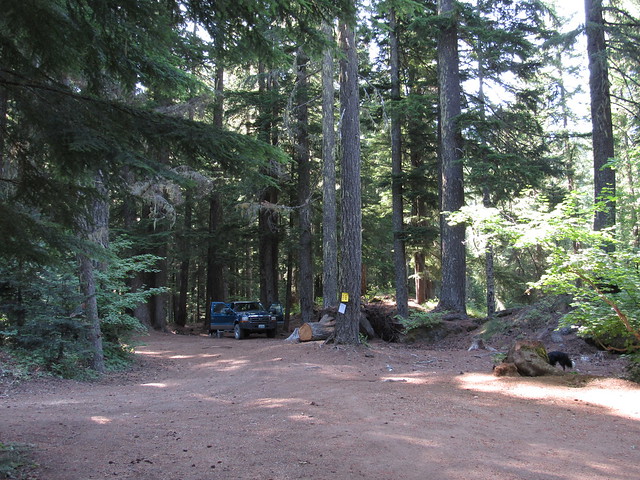 Having neighbors and being a little closer to the road than I would have liked meant that I had to keep a closer eye on the dogs that I usually would. It cooled off quickly so the hope was that it would be another great night for sleeping. 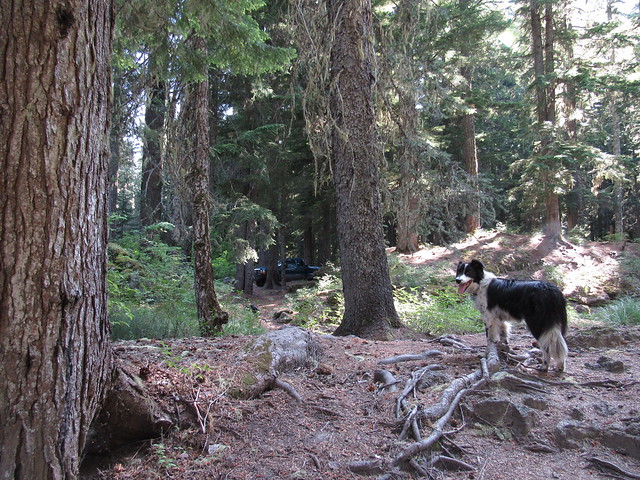 The family left but my new neighbors were some guys in a white logo’d van. They tried pulling in where I was parked but left quickly to the opposite side of the road. They were been pretty quiet so I hoped that were are decent folks. The rest of the evening was gorgeous and uneventful, and my neighbors remained quiet and kept to themselves. We played in the creek for a while and I took some pictures, still learning about the controls, capabilities and limits of my camera.